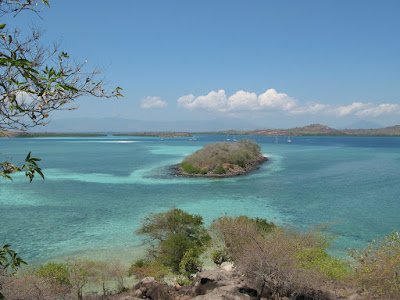 From Sail2Indonesia Rally 2015
The fourth stop on the Sail2Indonesia rally was Wakatobi. Famous for diving & established in some way as a park, we had been looking forward to this area for quite some time and were told by several people to linger there & soak it up because it is some of the best of Indonesia. So to be sure we weren't distracted by any land based festivities, we skipped the official rally anchorage in favor of others that promised great diving. And it turned out we had plenty of company with that same idea! Wakatobi is an acronym for the four main islands that make up the group and we visited two. The first was Tomia which had a super skinny entrance channel that we never would have known about if not for word of mouth and then a sat image of the area. But it was a great spot as far as diving goes. A striking wall ran along the whole outer edge of the reef that protects the anchorage and it was an easy dinghy ride to some of the best diving we've ever done for certain aspects. The wall had great topography because it was a drop-off but in the wall itself were all of these alcoves, caves and overhangs. The overhangs were so full of brilliant color it was overwhelming and something out of a little girl's fairyland, all pink & purple. You can't capture it in a photo. The detail and just jam packed coral, plant & sponge life on the reef was fantastic. We saw new nudi's, new fish, many new corals and some humungous sea fans. After the dives, we would come up onto the reef shelf and take off our tanks, then snorkel for a bit in the shallows. It is a totally different ecosystem. Again, we saw so much life, despite some pretty serious fishing activity. We really enjoyed that routine for a few days. And unlike most other wall diving we've done, I didn't have to split my time between focusing on the wall and looking into the blue for pelagics because it would seem, there are none! One day I was shocked to see 3 turtles, but that was in front of the house reef at the fancy Wakatobi Dive Resort, which is monitored.

In the anchorage, the harbor was always busy with local put-put boats headed to or from fishing areas. No one came to the boats to sell anything and all they did was wave heartily which was nice. It seems there is nothing much to buy on shore. What is in the dry goods stores isn't food- it is just candy, soda and 2 minute noodles. Not that we need anything other than fresh stuff. But a good warning to anyone headed this way... And we already knew what was available in the store because the wrappers adorn the anchorage, the reef and any beach you happen to walk on. When we first arrived to Indonesia, I told Jon that I was just going to bring our trash ashore this season and try to dispose of it how the locals do. But I quickly realized that they have no plan to handle their own. The water is their trash can. It makes us all ill to see it. So we are back to the routine of separating everything out and we burned our first bag of paper/plastic on a beach the other day making a big bag into a very small one.

After a few days at Tomia, we moved to another good anchorage at Hoga Island, also part of the group. There is budget conscious resort there and then some sort of seasonal research facility there that had recently closed so the island had a very quiet feel. It made for some much needed peaceful walks with no one to meet & greet. My favorite day was the one where we took the afternoon and went for what was going to be a short walk down the beach since we'd already done a scuba dive followed by a snorkel that morning. But we got rolling down the beach, around a point, found a trail that went inland a little, came out on another beach and then it seemed to make more sense to keep going than turn around. Next thing we know we run out of beach and the rocky ledge of the windwardside of the island is what is in front of us. Thankfully though, it was protected by a barrier reef so even though the tide was coming in, the water was calm and clear. So we continued on, wading up to belly button deep along the island for a long way with the sun getting lower, wondering just how big the island really was. We finally rounded a ledge corner and there was our boat, a dot in the distance- at least we could see it! So we picked up the wading pace even more and wove in & out of little coves tracing the perimeter of the island until at last, we were back into familiar territory. We got some seriously shocked looks from local fishermen when we were on the ocean side of the island, but we hardly had time to wave since we felt we didn't have a minute to spare. Getting into the dinghy at sunset was such a relief. We weren't going to spend the night in the bushes after all! And because it all worked out, it was a perfect day and such a great walk. Next time though, we're leaving earlier or turning around!

The diving we did at Hoga was really nice too. The big bonus was the dive resort here (we're assuming it was them) put out many black dive moorings all along the reef so it is perfectly easy to pick one up and descend. There was one that had a plethora of massive fans and for whatever reason, hoards of fish. We loved that dive. We had a group lunch one day at the resort which was good company and we shared some happy hours on each other's boats. We are really enjoying having such a great group of boats to do things and share anchorages with. It wouldn't be the same without it. We just wish there was actually more to do. Because the fact is, there haven't been that many really interesting or pretty things to see in Indonesia so far, in our opinion, aside from this pocket of diving. You have to look through a fair amount of ugliness at times to find the beauty such as with the trash or feel limited as to what you can do ashore because there are a lot of people packed into the villages and not a lot of infrastructure or roads in between to stretch out. When we get to feeling frustrated and a little dissatisfied with being here, it is the other boats who lift our spirits again. We keep track of each other via a daily SSB net which is great. We can get info on anchorages & dive spots from those ahead and also get updates on those who have fallen behind while recovering from food poisoning! There is always someone affected.

At Hoga, some of the local people would visit our boats in their canoes selling bananas, fish, coconuts and eggplant. Indonesia is a bargaining country although we are very poor at that practice. But often the price quoted is ridiculous and we make a counter offer which is either accepted or not. Anyway, a canoe came up to our friends' boat Fruit de Mer and they bought some bananas and also gave the lady a hat, unbeknownst to me. So the canoe comes over to us a few minutes later, tries to sell me some bananas- but also the HAT! I thought it looked like a really nice hat but I don't need one. That evening, we're sitting on Fruit de Mer discussing what we'd been able to buy from the local people and I mention the hat and they couldn't believe that their gift was for sale! Too funny.

We left Wakatobi with waterlogged ears for another overnight to Kroko atoll, right near the island of Flores. The scenery is much drier and mountainous here and we have 3 volcanoes visible from the anchorage that sporadically spew steam. The water is clear and nice but Jon is the only one submerging in it because I have an ear infection. Was it from the yuck dive? We decided to give the 5th stop a miss because it was located at a village not far from here that does "traditional" whaling. To us, using the word traditional doesn't make something right and we & many others wanted nothing to do with it. We've enjoyed seeing whales around the boat lately when on passage and it sickens us to know that this practice still exists. Now we wish we'd had some Save the Whales t-shirts made so we could hand those out to the canoes that come by bluntly asking for things. We also find that practice really annoying.

So, we've spent the past couple of days enjoying this very pretty spot with several other rally boats. The shallows have an amazing amount of life in them, the sand spits that uncover at low tide are full of interestng things like helmets, sea hares, all kinds of stars & urchins, live shells and crabs, and the scenery is lovely. But the locals are bombing the reefs around here and we heard an explosion yesterday. We are to be seeing more of it as we head west. So short sighted. We have tended to various boat ailments, to varnish, to other people's boat ailments such as one poor boat who picked up a rat at the whale stop (we lent the trap), and another with electronics issues. And we've tried to tend to my ear hoping it gets better fast. A boat rolled into our anchorage today suffering from food poisoning from the whale stop. And another one is still stuck there recovering. We sure are glad we passed on that one!

We found out today that stop 6 was cancelled since the area is preoccupied with elections, so we are proceeding to the next which is where our visas will be extended. Supposedly it is a capital city, on the island of Flores and some things are available. We'll be trying for internet, fuel and groceries along with any fun adventures. There's a natural feature with 3 colorful lakes that looks pretty. We're hoping that the stops ahead will be interesting and offer some decent land based things to do.