We've been out cruising around Spain's Balearic Islands for 2 weeks now so I thought I would share some ramblings about how its been. And yesterday, for the first time in forever, we were screaming along at nearly 8kts sailing so it even qualifies for some space on Sailblogs for a change. It is still early-ish in the season and so I can only guess that is the reason for winds that do a 360 every few days. It keeps us moving from one anchorage to another to find the lee and keep away from the swell which can come from a different direction to make things interesting. Having a look at the GRIB weather files does nothing yet to explain where this swell comes from, it just visits. Nothing is very strong or big, it is just that we don't feel like being uncomfortable! And while it would seem that there is no time for grass to grow under our keel, we have a velvet carpet of green on the bottom and it takes about 20 strokes of the corner of the brush to get it to come off one little spot. We did another round yesterday in gorgeous, clear water but have a long way to go to be finished. We hope that since we put 25 liters of paint on last year, we can scrub off the carpet and expose a fresh surface. It's so nice to see fish enjoying the shadow of our keel in all the anchorages and we had a dolphin visit yesterday but it didn't stay. We've always maintained that the clearest water we've ever seen is in the Bahamas but actually this is just as clear, it is just that there's not much in it! 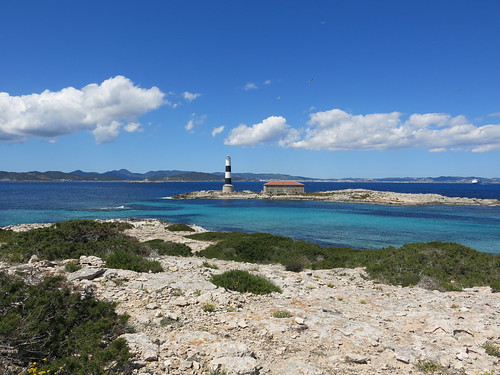 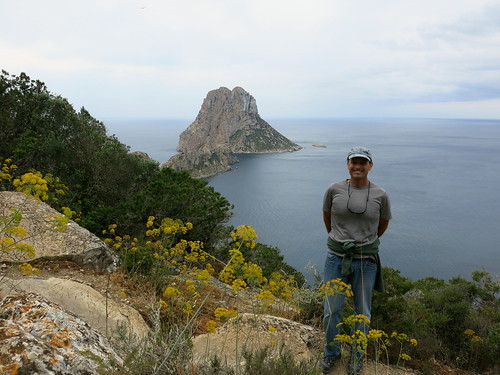 We've been moving around the islands of Ibiza & Formentera as they were first in line from Valencia. Known for their summer party atmosphere, there are also a lot of beautiful calas (coves) with high rocky sides, some decent walking & biking, a small walled city on Ibiza and lots of beaches. And these actually have sand! We continue to find modern Mediterranean architecture pretty unattractive and the old stuff very beautiful and interesting. We enjoy walking along the ramparts and pretending we're in a Game Of Thrones episode. Since Europeans seem to love to walk, there are random & planned trails pretty much everywhere we go and lots of picturesque cliffside paths from every anchorage that offer spectacular views. And every cala has a cafe! On wooded trails we even ran into some friendly pigs and there is no shortage of fresh herbs, especially rosemary which smells nice baking on something in the oven. We did a great day of biking on Formentera Island, which is all laid out with numbered bike paths and sight seeing. The inland wildflower fields surrounded by the most stone walls I've ever seen were so pretty with all the poppies and the lonely lighthouse on the point was a great destination. We wanted to bike another day but we had to leave yesterday because of the wind shift. They also have large salt pans on Formentera that kind of stink and we always get a chuckle when we think of how all this stuff gets to the bottle that you buy in the store. It is like all the exotic spices of the spice islands laying on the ground in the sun next to the dusty road. There's bound to be some extras getting in there! 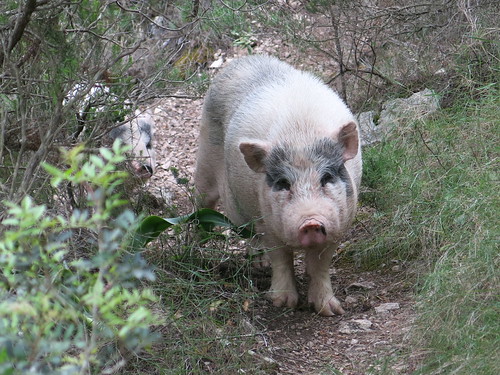 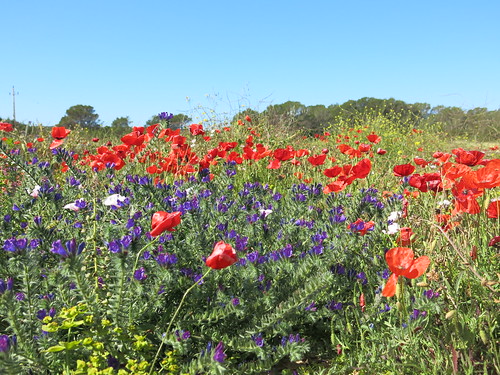 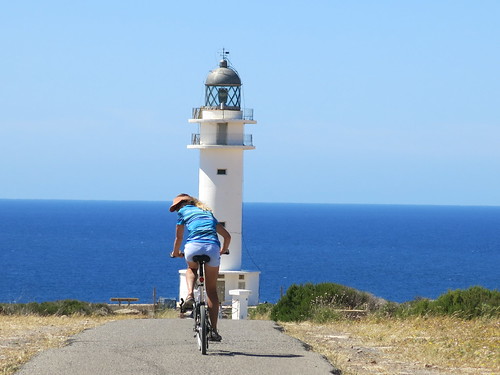 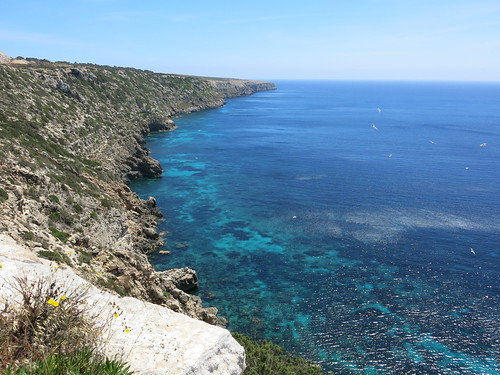 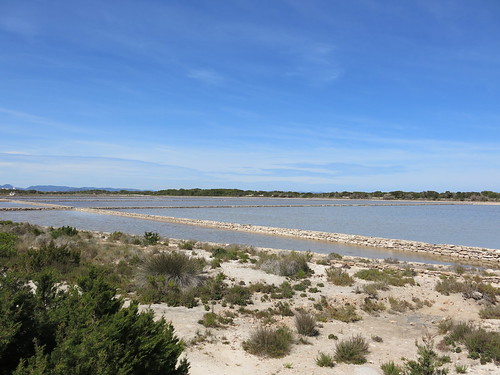 One thing about cruising here is that there doesn't seem to be much cruising scene. There's no pack of boats headed one way with the seasons and the cruising boats that are out and about are all spread out. When we meet people they are invariably heading off someplace other than where we're going or just staying put. I think things will change when we get to Gibraltar late summer though as boats will be gathering for the Atlantic crossing. We did get a chance to rendezvous with Geoffrey & Julie right before we left Valencia but ever since then we have been pretty much on our own. They are the friends we met in Valencia who had us to their lovely thatched cottage in England. 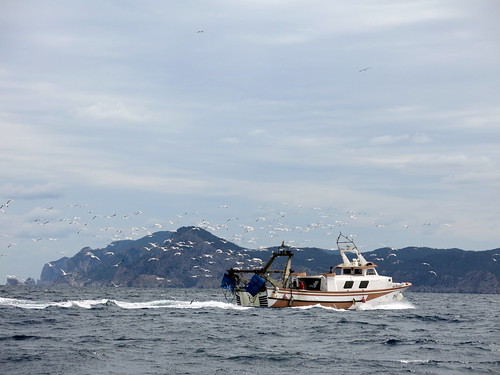 It is still early in the season so there is plenty of room in the anchorages & on the beaches but things are heating up. We've seen all manner of anatomy already since the general thought is you want all your bits evenly tanned here! I feel like I should be going around handing out Vanuatu nambas! In the harbors, all of the tour boats smell of fresh paint and the restaurants & stores are getting set up for the masses. It has a festive feel but we're also a little scared of what it will be like in July & August when I think all of Europe is on vacation. We made out OK last summer but I don't think I have recovered from the Vatican museum crowds! 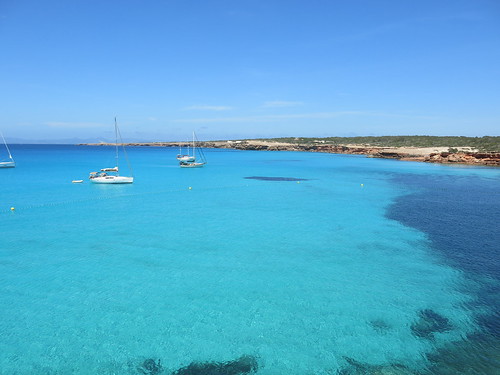 It is 6 years ago this month that we quit our jobs for the fourth time to go sailing. We've seen more of the world from our deck than any other way and we have a lot of great memories. We do get a little antsy though if we feel limited by weather because we have gotten impatient in our old age. For example, this morning it was blowing 25 kts in our semi-protected anchorage and boats were dragging. We could see the holiday makers (as the cruising guide calls them) on shore walking off their hangovers on the promenade. We could just as well have had a hangover since we felt nauseous from all the motion of our bucking boat. We were joking to ourselves that they will be bummed out to leave this paradise and go back home but we will still be out here in the wind & waves "living the dream". It isn't all rum punches, at least not in our opinion; it can have its ups & downs. When the wind settled down and we got ashore Jon turned to me and said "people are having a really nice day here". Well yes, when you are not out in the harbor losing sleep with the roll, worrying about whether you are going to drag yourself or get creamed by another boat sliding by, you can have a nice day! We had a really nice afternoon strolling the seashore, people watching (rugby on the beach) and doing some errands in town. We actually found a new internet provider that has reasonable rates. And now it is a beautiful evening with no wind. I think we'll put umbrellas in our drinks tonight and look for the green flash. Life is good again. 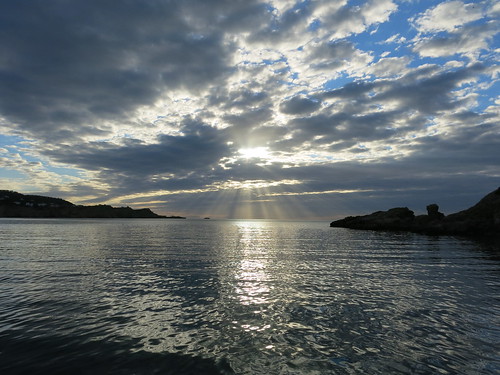