We're Smarter With Our Smart Phone All's well on Evergreen and we've made some tracks in the past couple weeks both on land and by boat. We're in Mallorca now! Another milestone in my mind as I have anticipated this island since my days at MGH working with a doc who actually fell in love with Mallorca and moved here permanently. Whenever I exclaim that we've finally made it to such & such a place, Jon gives me the quote from some movie: "Didn't I tell you I was going to show the world baby?" 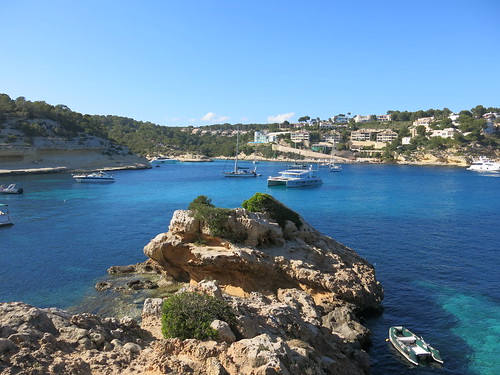 The weather has smoothed out and we are not running from one anchorage to another unless we want to. I think our boat is looking a little faded with all the sun it's had but we still can't help taking pictures of it in all the beautiful anchorages there are. Looking at it from way up high on a ridge line while hiking, it is just a speck at times and yet it holds so much of our life in there! And so much stuff... We always worry about it and can't wait to lay our eyes on it at the end of the day. I don't think we'll ever get over the time we came back to it in Australia one day and it had dragged all the way across the anchorage in between a dozen boats and almost up against a seawall but didn't have a scratch to show for it. Phew! You only get lucky so many times. And while we're away, the sun shines on our solar panels and tops off the batteries. Jon tried to get it set so that it would also heat our hot water with the extra but he is still trying to get the last part sorted. And now we are almost to the point where we don't need any hot water. 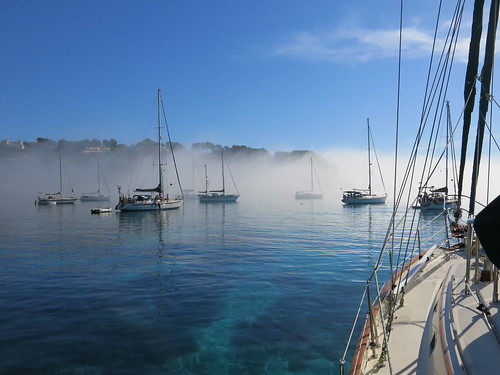 The new Raymarine radar is the best we've ever had and works great. We were glad to have it on one foggy morning here when we didn't feel like waiting to move anchorages. Although the suncover falls off all the time. We decided that the packaging the radar came in is sturdier than the suncover is which is pretty sad when you think about it. It is now held on by rubber bands. And fortunately we have a good stock of them since they come on all the asparagus we buy everywhere. Can you OD on asparagus?! Love the produce here in Spain. 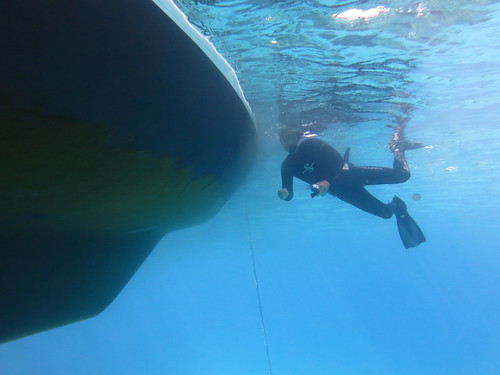 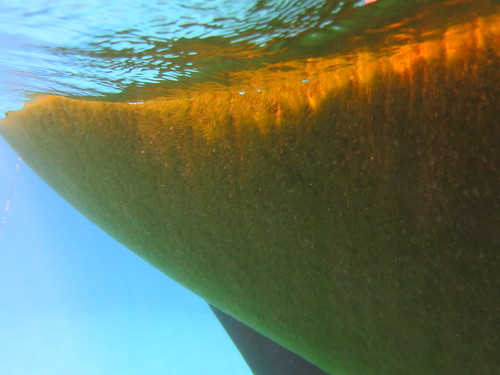 We enjoyed the island of Ibiza and visited several more spots on it before jumping off to Mallorca. But I can now see the difference. The land in Mallorca is much more diverse and dramatic and the beach vacation atmosphere not as overwhelming. It took 4 sessions to clean our shag carpet bottom (picture included here in case you thought I was exaggerating), two of which were using tanks and we made ourselves completely ill with the combination of the effort to scrub and the rolling of the hull as we did it. I think I feel sick just writing about it. But, the fish life under the hull was great! On the day with the school of all the silvery ones I didn't have the camera but we are definitely seeing more in the water, perhaps because we're closer to the Atlantic, I don't know. Jon refilled the tanks with the new rebuilt compressor we got last season in Malta and it worked fine, so much better. Now if only the generator started better... it is always something. We are looking forward to doing some diving on our own here just to play around and see what there is. We are encouraged by all the dolphin we see now. 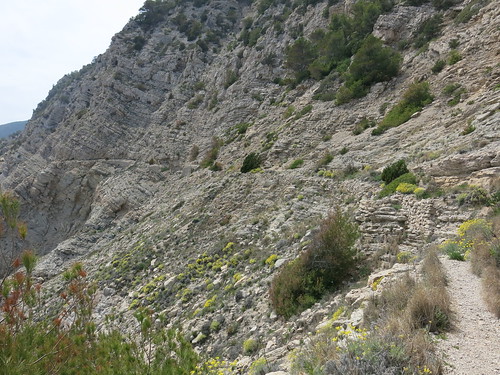 On the night before we left Ibiza, we stayed in a beautiful anchorage at the north end of the island with great rock formations and a crazy cliff-side trail to an old tower. Then some new friends came in and anchored near us. Then the next day we had a fast sail to Palma with perfect wind... and a very clean bottom!

We anchored in a cala that is peaceful and calm by evening and morning, and then absolute mayhem misery by day! The cala had old Phoenician cave tombs with carvings and nice trails but people do their usual which is leave their own mark (and their TP) along with their initials in the cave walls which ruins it. We cannot figure out what it is in the Med where it is perfectly normal to just leave your TP all over and even to have to go in all these places. I honestly think people save up for it! I think more people should depend on Depends! And then there is the intensity of the beach scene. Its funny, I have seen more nudity this summer than I have in my whole career of nursing. I had to have some treatment to a sun spot on my face last week and they did photo dynamic therapy. Since there is so much natural light here, they just send you outside for 2 hrs to activate the chemical rather than use indoor light. So I'm walking around on the tourist beach where we're anchored for my 2 hour treatment time stepping over a carpet of bodies that are either chocolate brown or fire engine red depending on nationality. The dermatologist tells me that skin cancer has become an epidemic here and is a real problem. Huh, you don't say! 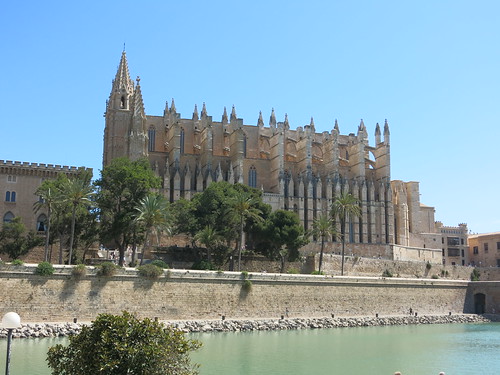 We visited the city of Palma and decided to do it by bus and leave the boat safely anchored in the cala several miles away. We enjoyed walking around the city, had some great pizza for lunch and did what museums were open since it was Sunday. We couldn't get into the cathedral because it is closed on Sundays... The bus ride back was an adventure though! When we got on the bus we said we needed the last stop and the driver asked us if we knew the way. We laughed and joked with him thinking that was funny and sat down. Then once we got a ways out and there were just 4 of us left on the bus, it became clear that he actually DIDN'T know where to go- it was his first time ever doing this route and he'd had no training on where it even went or what roads were suited for his bus! It took forever for him to find where the other people needed to go and along the way, he bottomed out the bus twice on steep curvy hills! The bottom of the bus would scrape along the pavement until we backed up and he raised the bus up. And all with such a great sense of humor! This is a big, new city bus. Jon & I had already talked about how much smarter we are with our smart phone and this time it didn't let us down either because we had to direct the driver where to go using the phone because of course we had never been on any of these roads except for the drive in. It added an hour to our ride but when we finally got there I just about gave the driver a hug because I felt so bad for him and I was so glad to get off the bus! 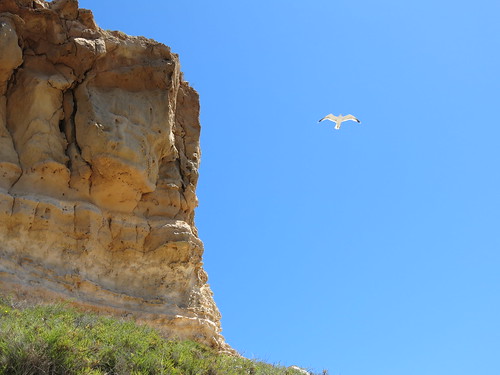 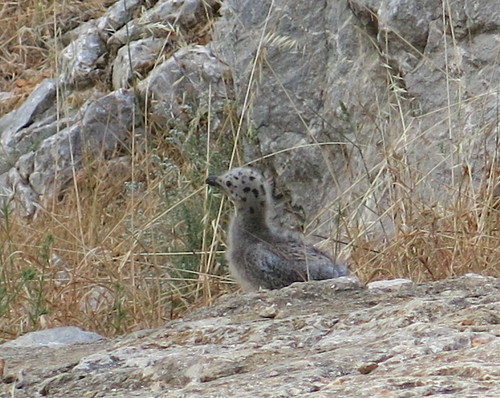 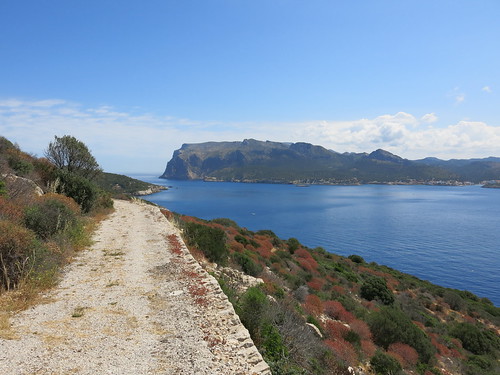 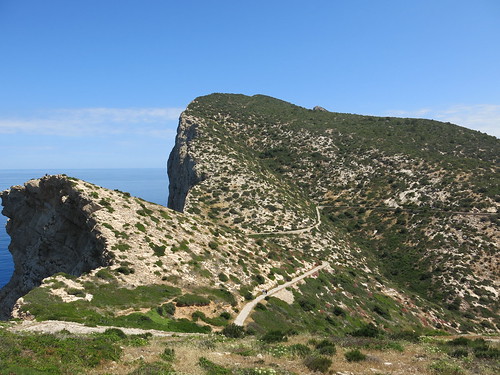 And then we started moving around to the north side of Mallorca, stopping at some fantastic places along the way and doing some great hikes. We use Open Street Map for trails and it works like a charm. It's amazing how many very old trails on are Mallorca. It feels good to log many zero dollar days and still have so much fun. I'm really enjoying the foliage here and all the flowers & birds. Dragonera Island sits at the NW corner of Mallorca and the whole thing is a park with old donkey paths for trails. The Eleonora's Falcon lives here part of the year. It winters in Madagascar, then comes back here to this island late summer to breed. It feeds on migrating birds that are passing through. I always find it amazing to know the distances that birds travel to avoid the cold. Didn't spot one but did see a baby gull which explained why the adults were standing around like sentinels everywhere you looked. Its breeding season now for them. Dragonera has 2 lighthouses and I read that in 1851 when they were built, they used a Fresnel lens and olive oil for fuel. The donkey paths were made to carry supplies to each end of the island for the families that ran the lighthouses. 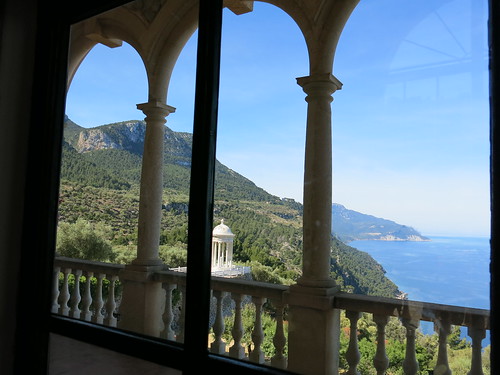 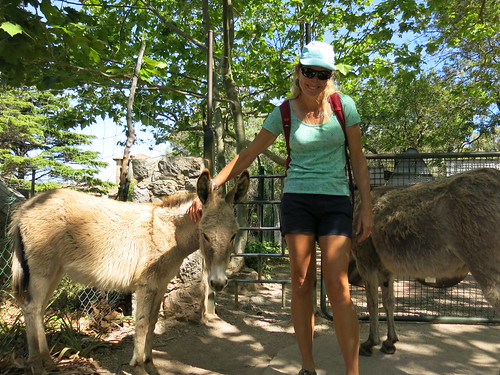 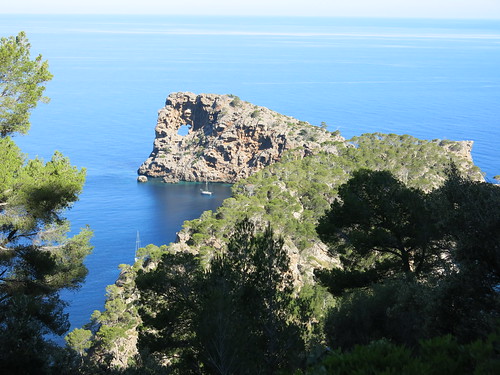 Because the weather has been so calm, we've had the opportunity to explore a few of the less protected spots including Peninsula Foradada and the tiny port of Deia. We'd met the man who organizes the Luxembourg Marathon on top of a mountain in Capri last year and he told us Deia was one of his favorite places. And I can see why, this whole area has beautiful scenery and amazing hiking on dry stone donkey paths, some dating back to the Moors. We spent our anniversary taking a lovely morning walk up the cliffs to a house museum called Son Marroig. It was the house of Archduke Ludwig Salvador from Austria who died in 1915. He had lived in Mallorca for years and was responsible for making a lot of the donkey paths in the immediate area and he kept his steamship in the same spot where we were anchored on the peninsula. In the afternoon, we moved 1 whole mile to another lovely spot in Deia Harbor and took another loop hike just talking taking in all the scenery. It is a favorite way to spend a day with my favorite person. And the Med has some of the most interesting ports we've ever been to. 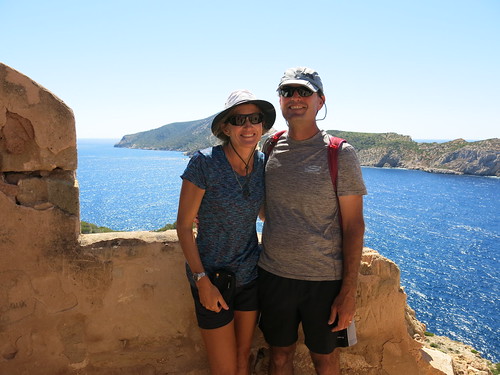 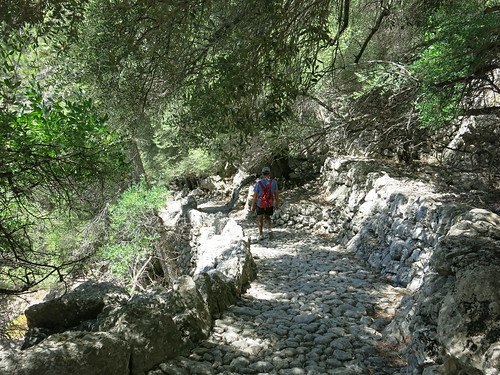 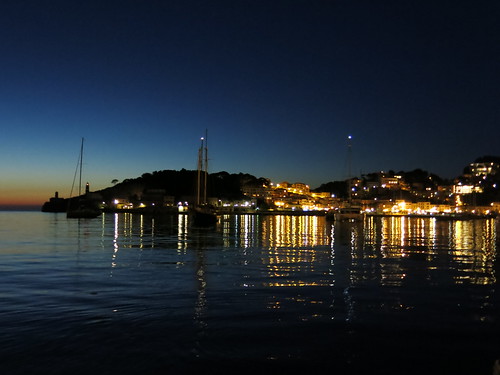 And now we're in the harbor of Soller, still on the north coast. It is a perfectly rounded harbor surrounded by mountains, the terracing of ancient olive groves and an under story of lemon & orange trees. There's an ice cream factory in town where we refuel after long hikes. Tomorrow we will take the old scenic train to Palma because the books say you shouldn't miss it. Someone we met said it is pretty slow- slow enough to pick flowers along the way! It will be good to give our legs a break for a day. We have more mountains to climb here. 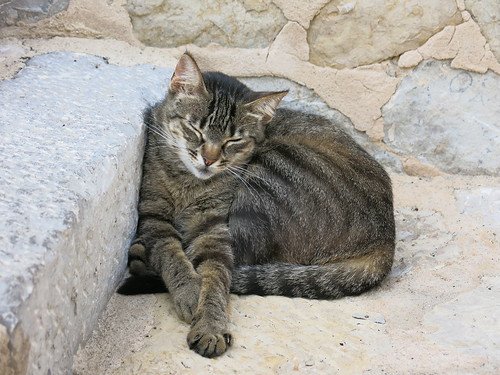 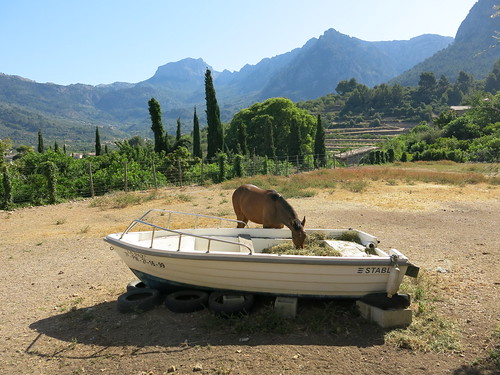