Written 7/28
We're en-route to Morocco right now, making a straight shot from Cartagena and crossing just inside the Straits of Gibraltar but still in the path of all the shipping in & out of the Med. We're fighting current and our ETA for tomorrow is going up! We've already plotted out that there are 8 hours of darkness and we'll do one 3 hour and one two hour one each. We're rusty at this! Part of the reason for rushing over here is that both our visas and our VAT tax time have or will be expiring and so we need to reset the clock with a visit outside the EU. We're excited to see Morocco although we know there won't be enough time for a thorough visit because we have to get back to Spain (fingers crossed on that one) to pick up our mainsail because we thought better of having it shipped to Morocco! Too bad because we really wanted to see more of the Sahara than the red on our decks and the famous cities of Marrakesh & Casablanca. Those are too far outside of the Med to sail to for now. We'll see what we get done and how we feel about this new place.

After we left the berth yesterday morning, we scooted over to an anchorage just outside the harbor and jumped in the water to check the bottom. It was so warm we were hot in our wetsuits and the fish were all around having breakfast on the stuff we were brushing off the hull. The bottom looked good though and we didn't have much to remove thank goodness. We haven't quite recovered from the rug of grass we had earlier in the season so we are a little paranoid still. Then we got underway and motored till 10pm with 1 hour of wind enough to sail. We rounded Cabo de Gata with its unusual white rocks and stark but beautiful mountains. I so wanted to stop here for a day to hike as it is a park but the swell rolls in and makes it all but impossible to enjoy and we are on a mission anyway to make some miles. 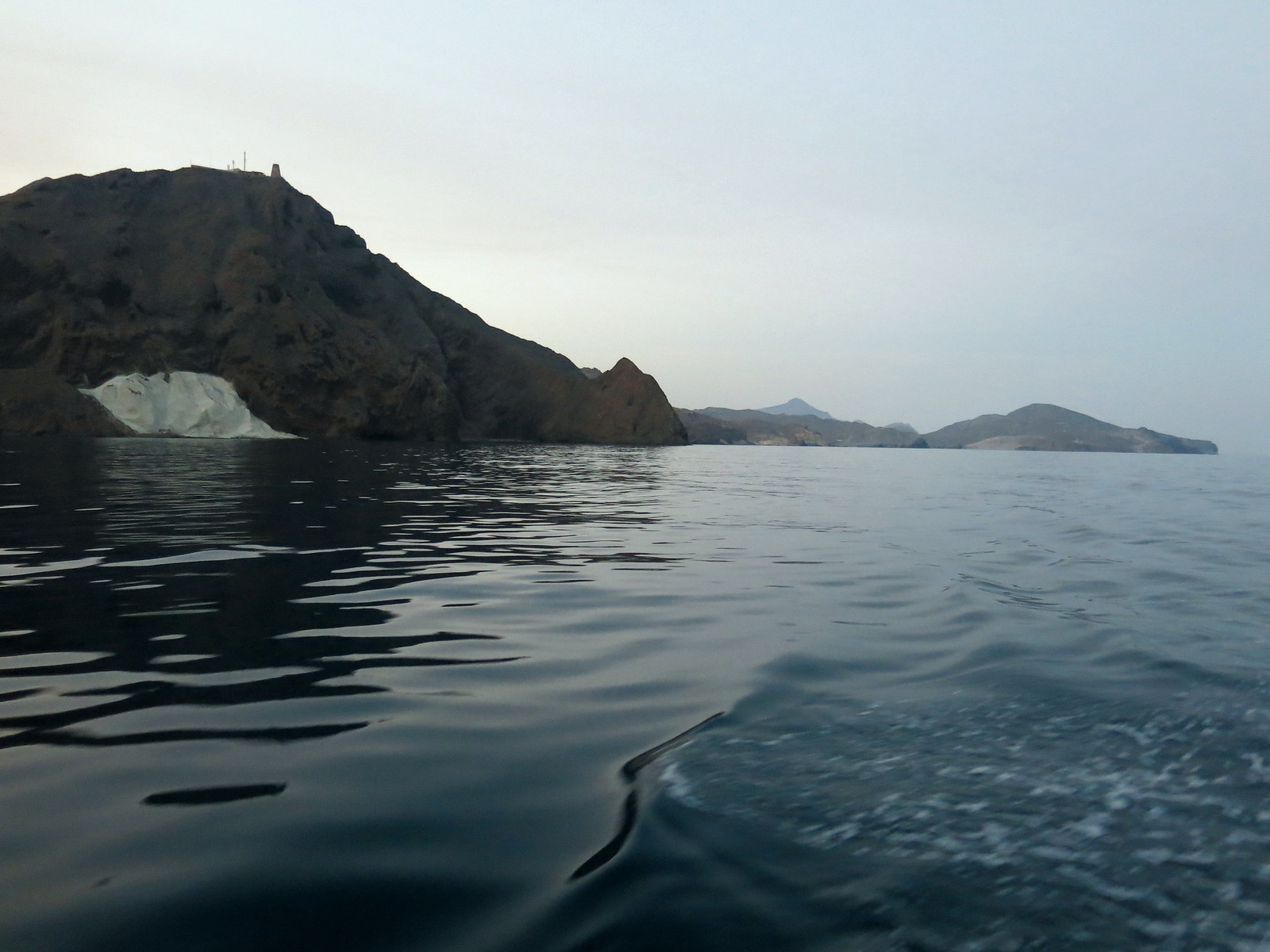 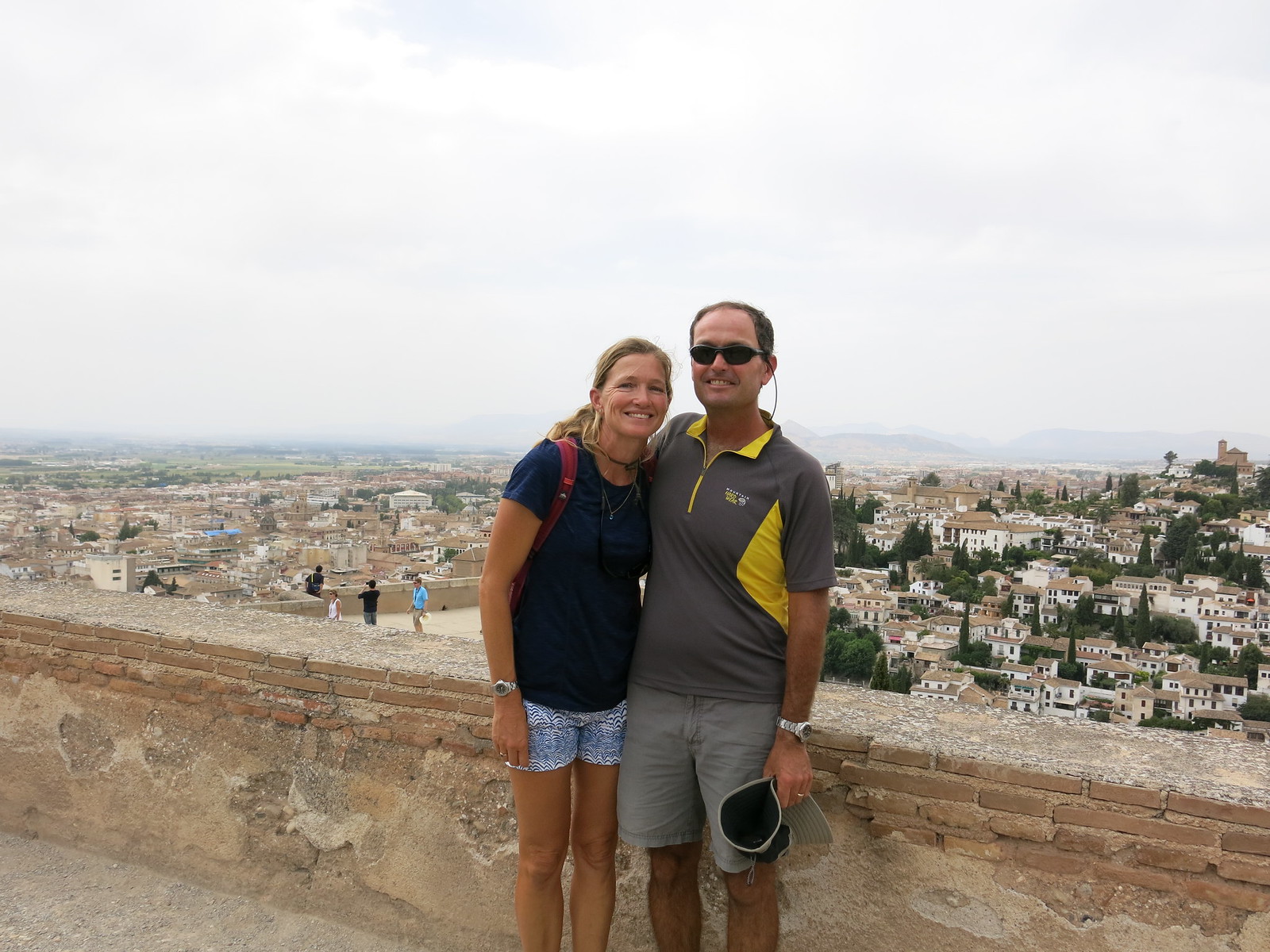 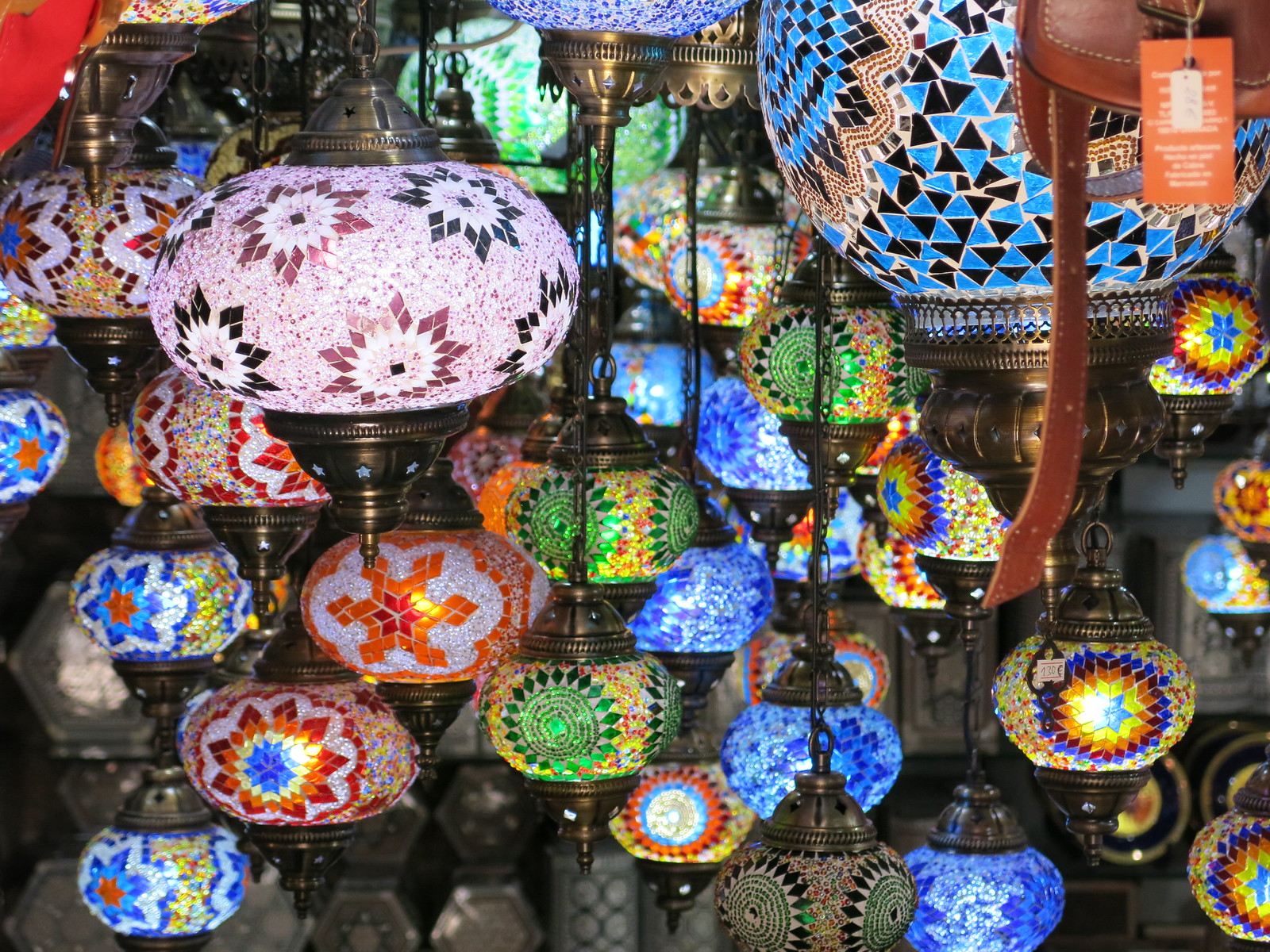 The rest of our southern Spain travels went great and we had such a nice time plus learned a lot. From the Sierra Nevada mountains we headed to Granada and stayed at an Air Bnb place that was hardly OK. It is such a crapshoot. It was on the edge of the famous neighborhood of Albayzin, Granada's old Muslim quarter. We stood at sunset on the Mirador San Nicolas looking over at the Alhambra like Bill Clinton did many years ago during his presidency. I saw a picture somewhere of that. Then we went back to our baking hot room where the best part was taking multiple showers and playing with the kitten they had. The next day we stayed out touring from dawn to dusk doing the city, moving in & out of little shops. It was hard not to buy a balloon light but the power is wrong and plus, where would we put one? They're so pretty though. I loved all the running fountains that reminded me of Rome. We soaked up the Arab/Spanish feel and ate Moroccan style gyros before the start of our timed entrance ticket at the Alhambra palace. The grounds were lovely and complemented the reddish stone of the buildings. The details of the interior rooms while void of furniture, were so fine they made the Taj look plain to me. 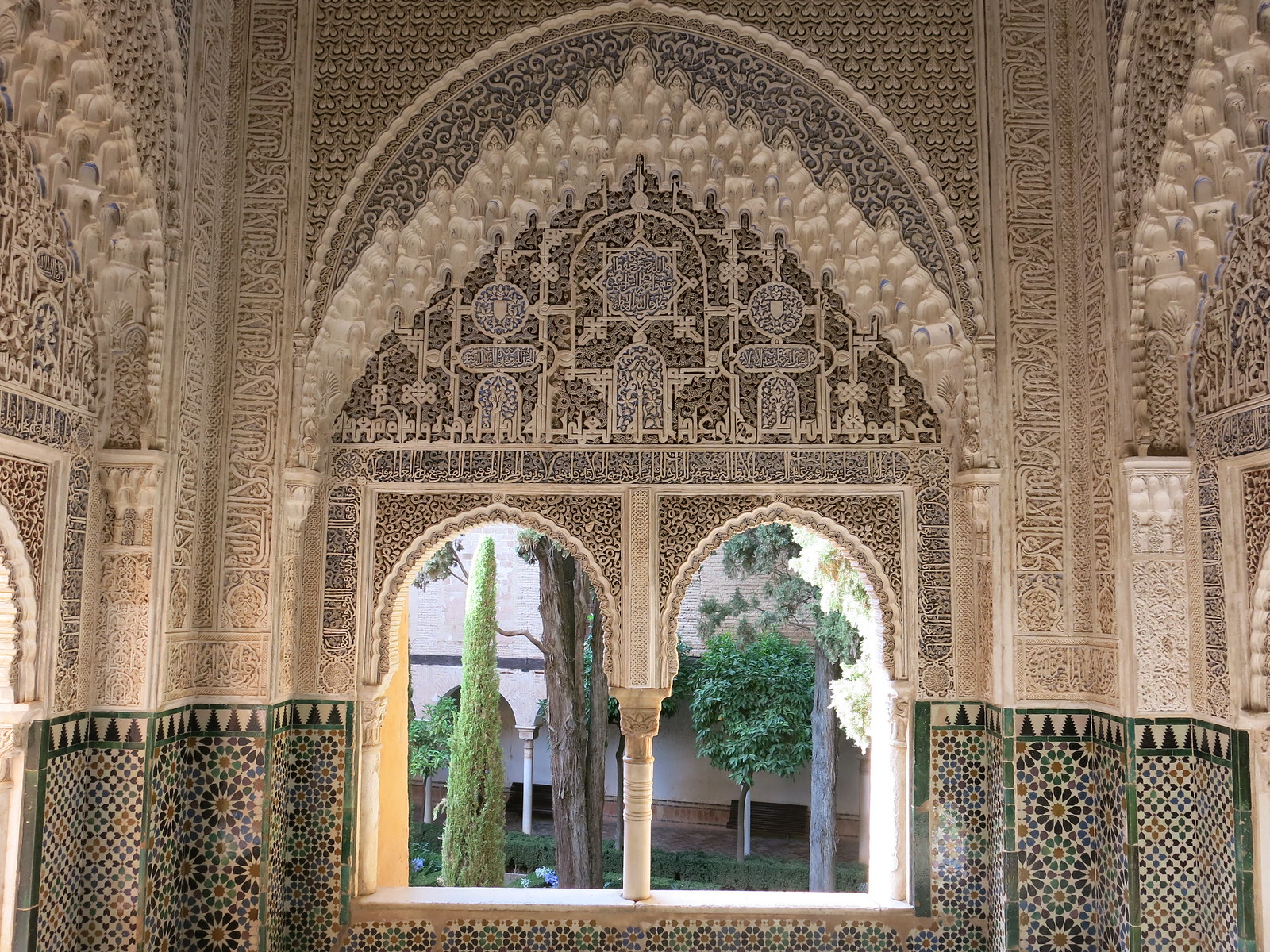 Seville ended up being our favorite city because the buildings were so beautiful and there was such a good vibe to it. Plus, we stayed in a great hotel with AC and all the luxuries that we were missing like a super comfy bed. I have to say though that our experience in Europe has been amazing in that we can stay right in the middle of the oldest part or most interesting areas and be on a budget at the same time. We can get cars, fly around, find marinas (although they are never as cheap as I want them to be for that square of water), it is all here. If we stay in a place we don't like it is more often the fact that we tend to book last minute and it can be hard to tease out the reviews to get a gem every time. 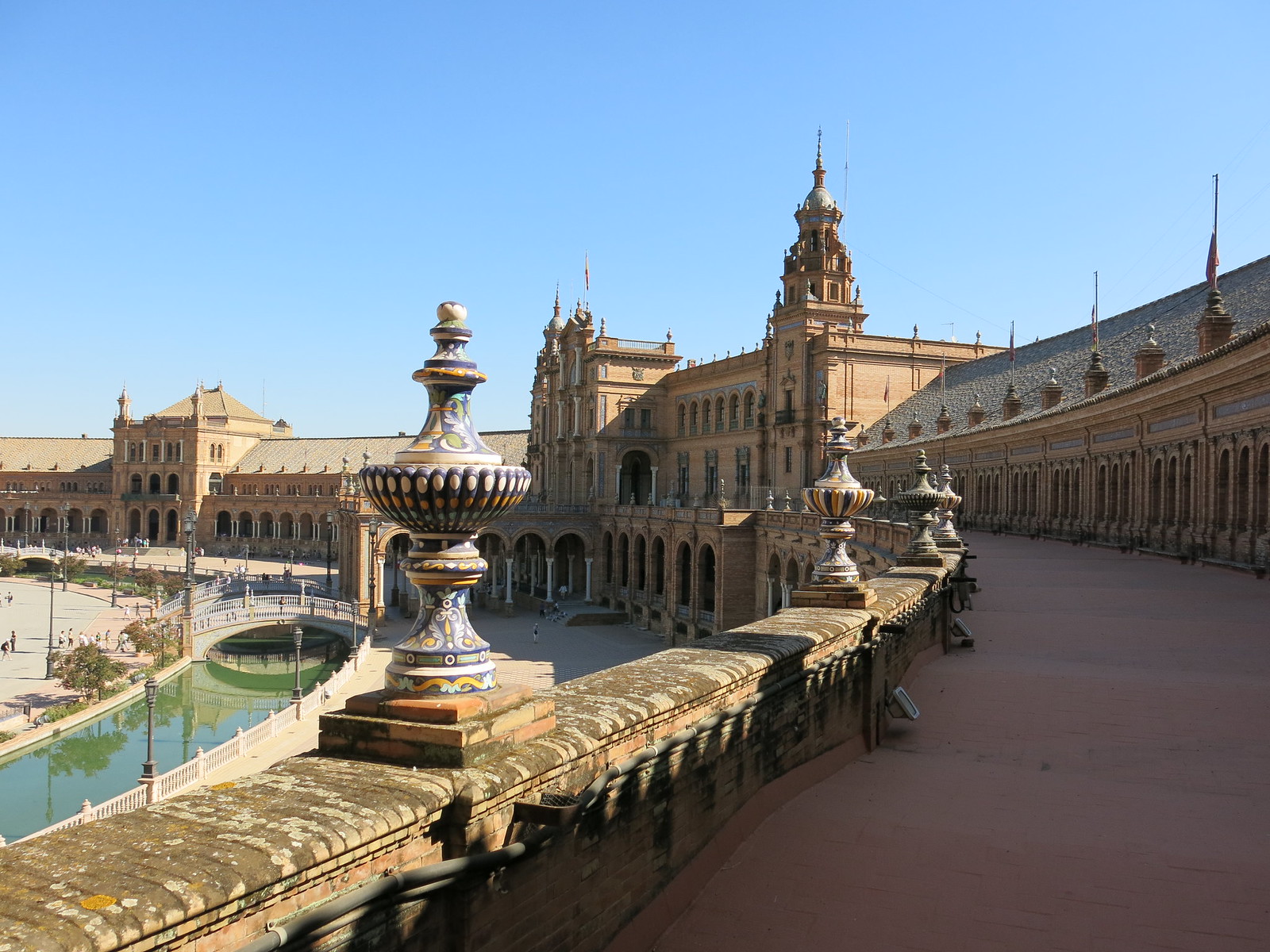 The Plaza de Espana building was finished in 1929 for Seville's international fair. Now used as government offices, you can stroll around it looking at the ceramic tile everywhere and a unique mural for every province in Spain. The horse carriages circle the fountain in the center and the whole scene is beautiful as well as the adjacent park. We visited the Seville Cathedral and pondered whether Christopher Columbus's bones were or were not in the mausoleum. I read that he might also be in the DR. We also appreciated the gore of religious sculpture of the time- love the up close vasculature of this one. I think it is more detailed than my anatomy cadaver was in nursing school!


Next was the city of Cordoba. We stayed in a very old Spanish house with interior courtyard in a studio apt with a kitchen which was welcome because we were living on big salads for dinner and were in the mood for something else. I never do too well eating out a lot and I should just let Jon order for me because I always order the wrong thing. This happened in Seville and the next day I was only interested in eating soup but could only find this pureed vegetable stuff in the store which Jon nicknamed "compost soup" which it really did taste like actually! 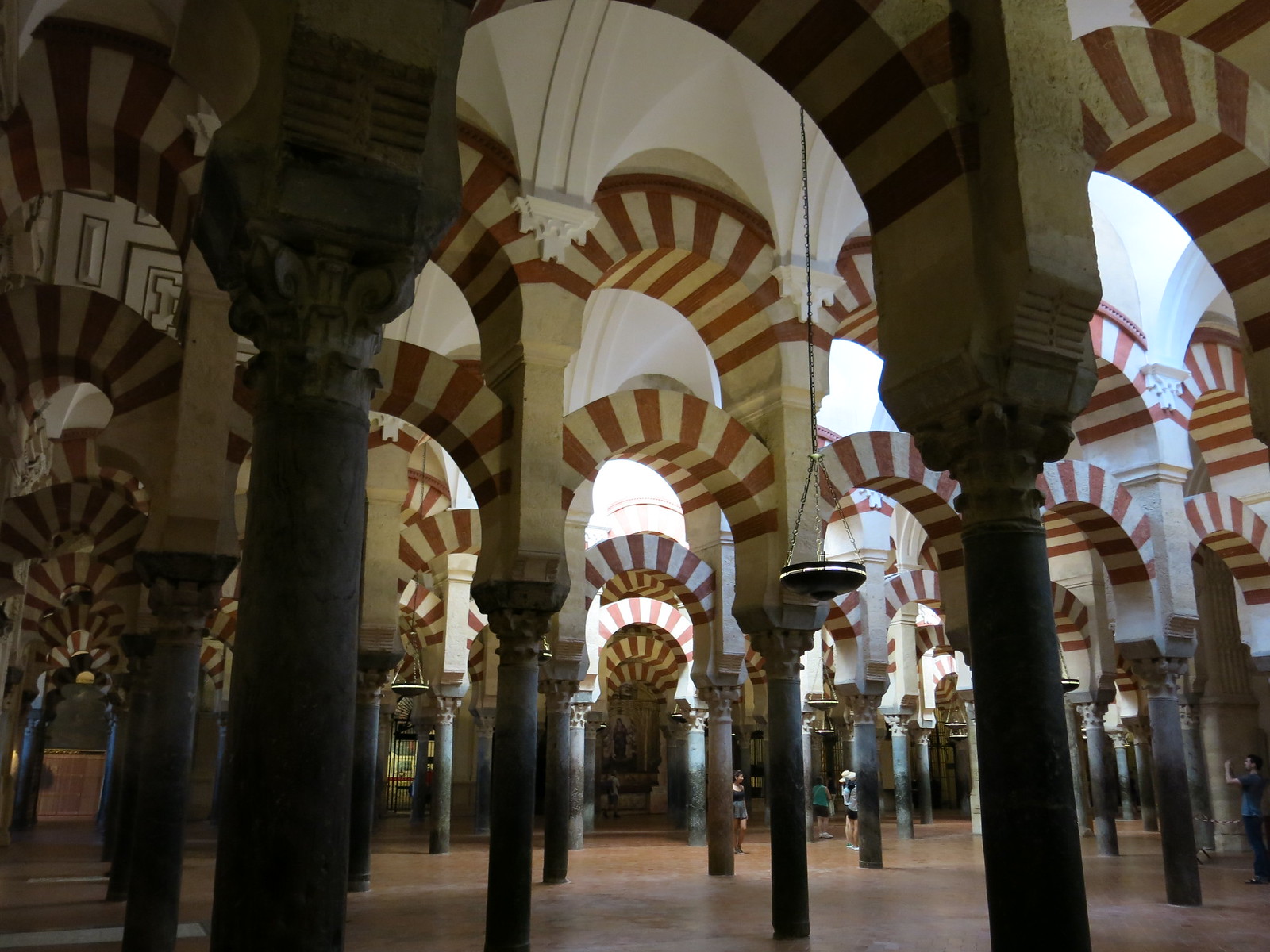 I loved Cordoba too, it felt the oldest of any place I've been and I found it very intriguing for some reason. Especially the old Jewish quarter. There are so many interesting old doors in Europe too. You could have a coffee table book just with pics of unique doors. Cordoba has the Mezquita Mosque which was founded in 785. But it was built over top of a Christian Visigothic church that had been there since 600. In 1236, the Christians took it back and in the 1520's it was Charles V who changed the look the most to make it cathedral like rather than mosque like. What you get is this incredible building with a mish-mash of arches, pillars, domes, 1600kg of gold on display in one alcove and a lovely courtyard of orange trees in the entry area. It would seem hard to know which religion to worship here or how to believe that one is more right than the other because this place is so mixed up, but lovely in it's history and architecture not to mention the sheer size of the building.

There is also the Alcazar palace. Originally a castle in the 13th century, it became the headquarters for the Inquisition for the Christian Monarchs. Now it is full of gardens and no one is dying here which is good. Adjacent is a horse stable, built in the 1500's and now used as Cordoba's association for traditional Andalusian horse enthusiasts. We went to a great performance there one night. The routines were choreographed to Spanish music, some including flamenco dancing, the horses stepping in diagonal patterns, backwards, tight circles- very different than what we've seen before. All in a beautiful, historic venue. We both really enjoyed it. 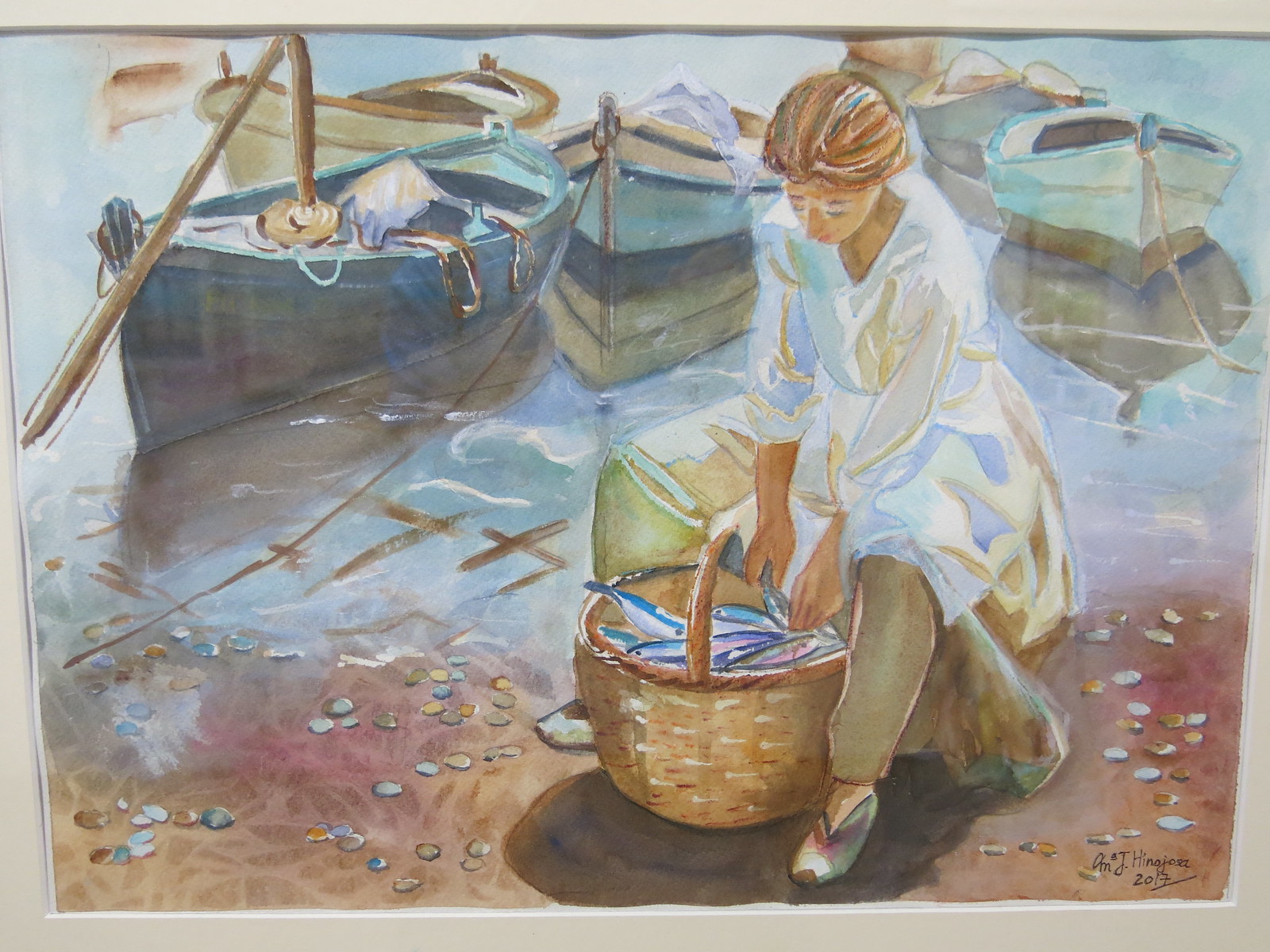 On the way back to the boat, we stopped in the town of Jaen for lunch and a leg stretch and visited the oldest 11th century Arab baths in Europe. They also had a really nice art exhibit in the same building by both local and international artists. These paintings were among our favorites. Everywhere we go, there is something interesting to see. 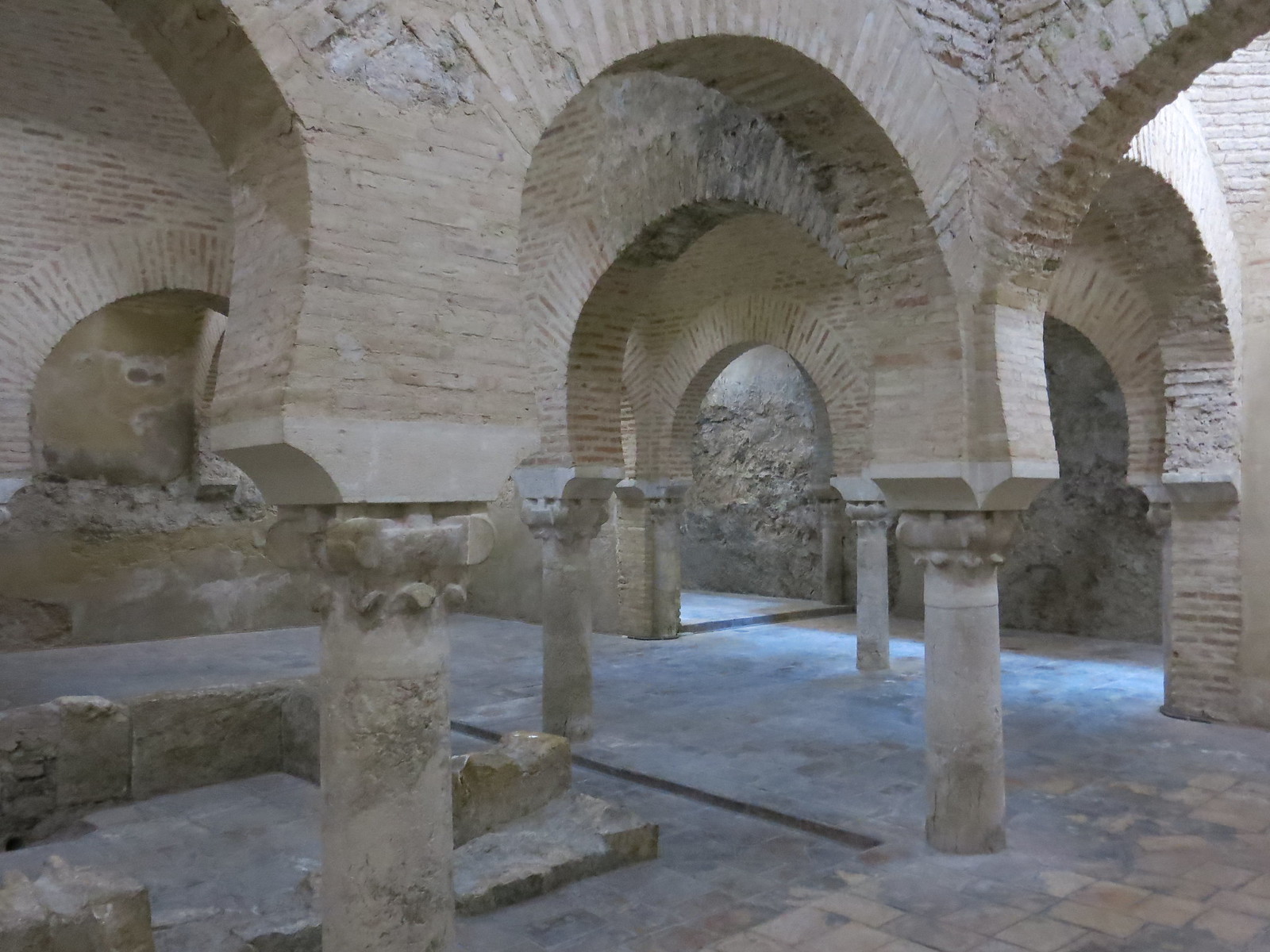 Once back at the boat, we threw away all the things that we so carefully harvested from our old liferaft because they stunk to high heaven! Its funny because when we bought this hypalon raft years ago they said it was so much better than a PVC raft because it didn't smell. Well, after having the boat closed up for a week and a half and coming back to it, we beg to differ! And now we have a PVC raft but thankfully it is all sealed up and we won't smell it unless we have to deploy it. Here's a pic of it after we pulled the little string to inflate the dream house. 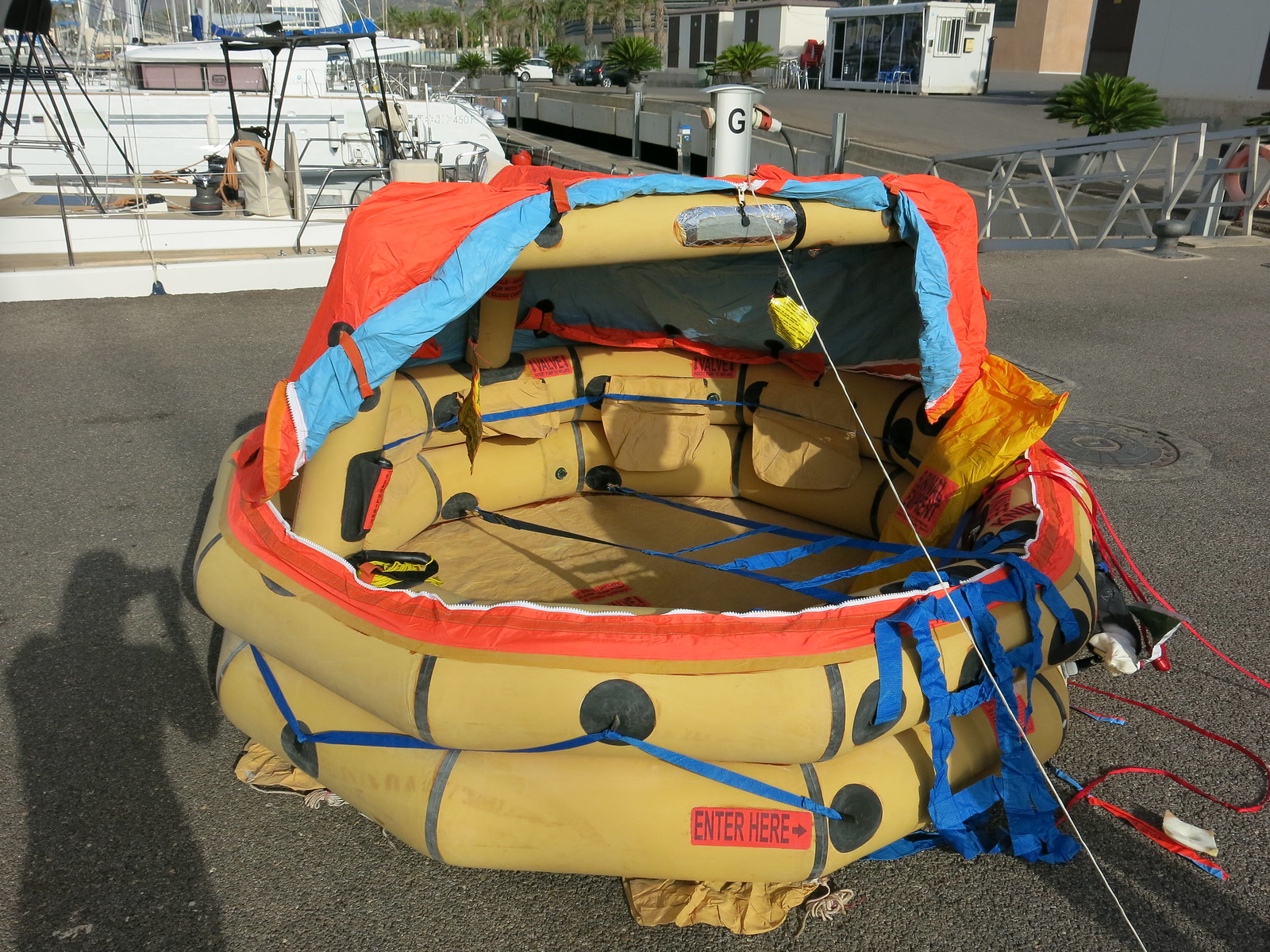 We slapped a coat of varnish on the toerail, did a little more local sightseeing and regrouped and then here we are under way motoring, dodging ships, wishing we were ashore moving around. It is glassy calm except for all the fish and dolphin jumping. And we saw small whale. No killer whales yet but we are looking. They are supposedly around here at this time of year. Hopefully all will stay quiet overnight and by tomorrow afternoon, we'll be getting to know Morocco!

As always, there are more pics in the album if you click on one of these in the blog text. I haven't done any labeling of pics yet though. 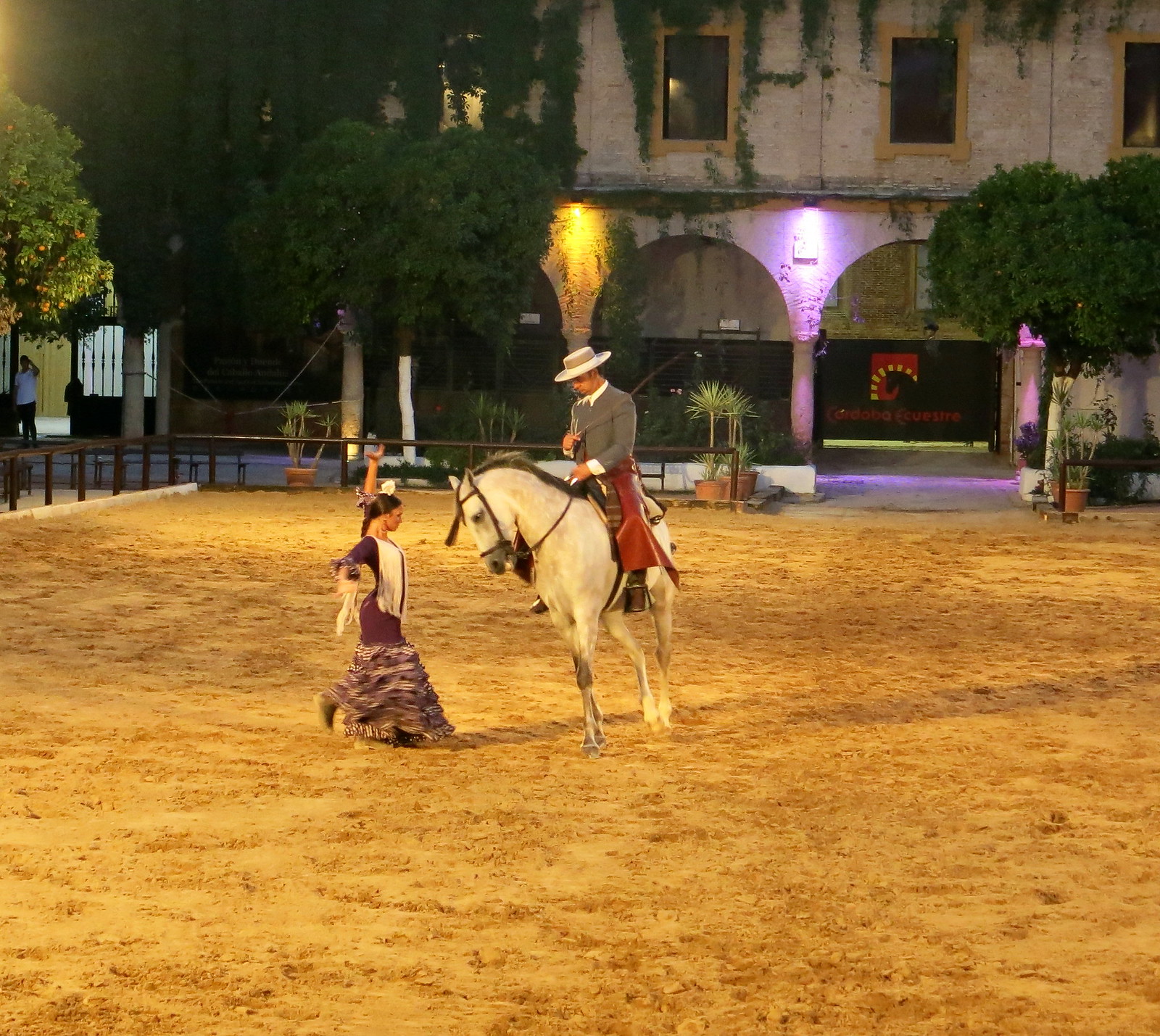 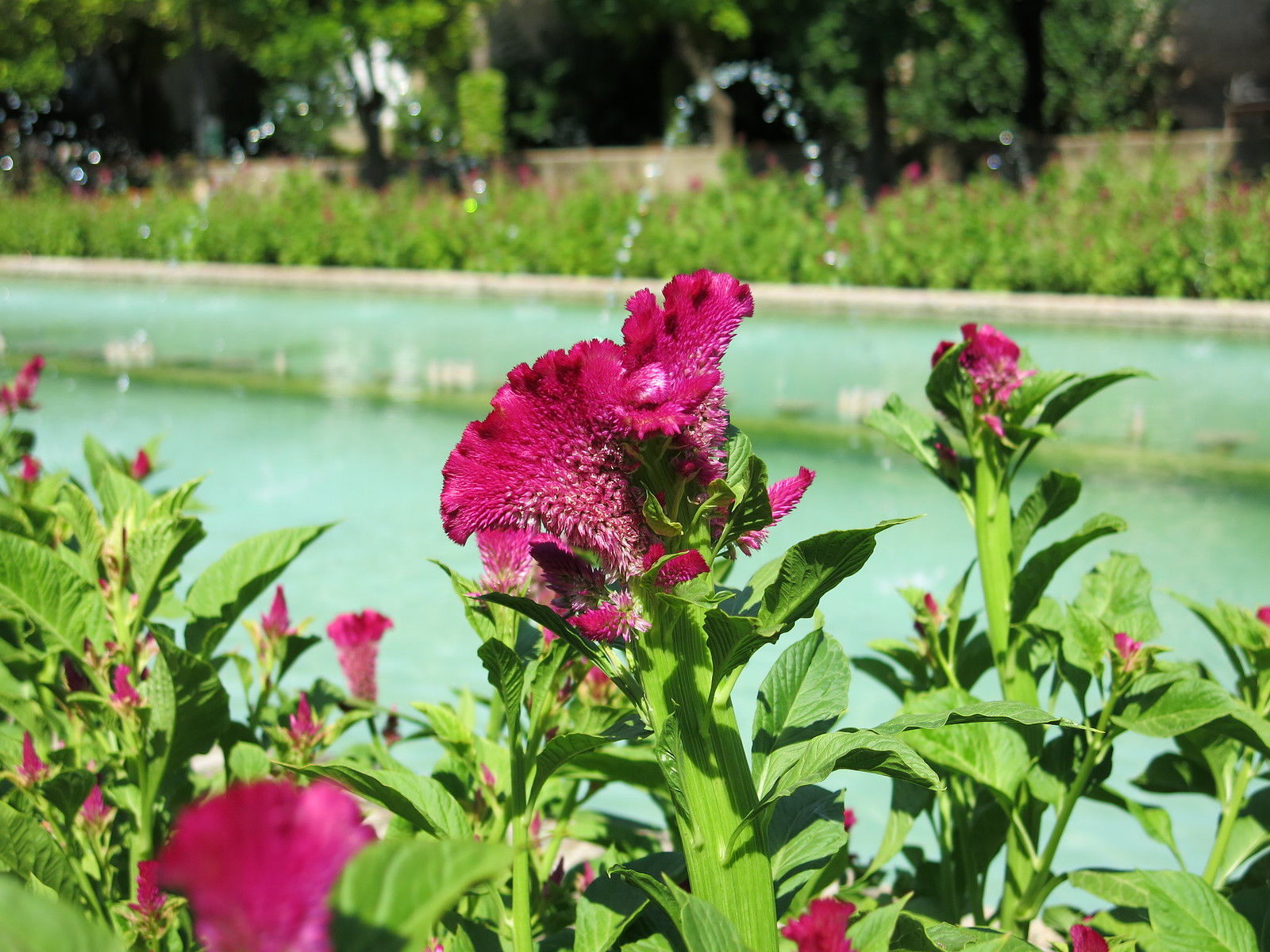