I think we kind of lucked out on how calm the overnight was to Morocco because the sea was like glass all night and we haven't seen it like that again! Progress was slow though as we kept bucking the 2+ kt current that constantly flows into the Mediterranean Sea to make up for all the evaporation. We slept in our regular bed rather than make up the sea berth in the main salon which meant we got some good zzz's. Just at sunset, a tug & tow passed us- he was carrying an offshore oil rig bound for Turkey. A long way to go towing that! 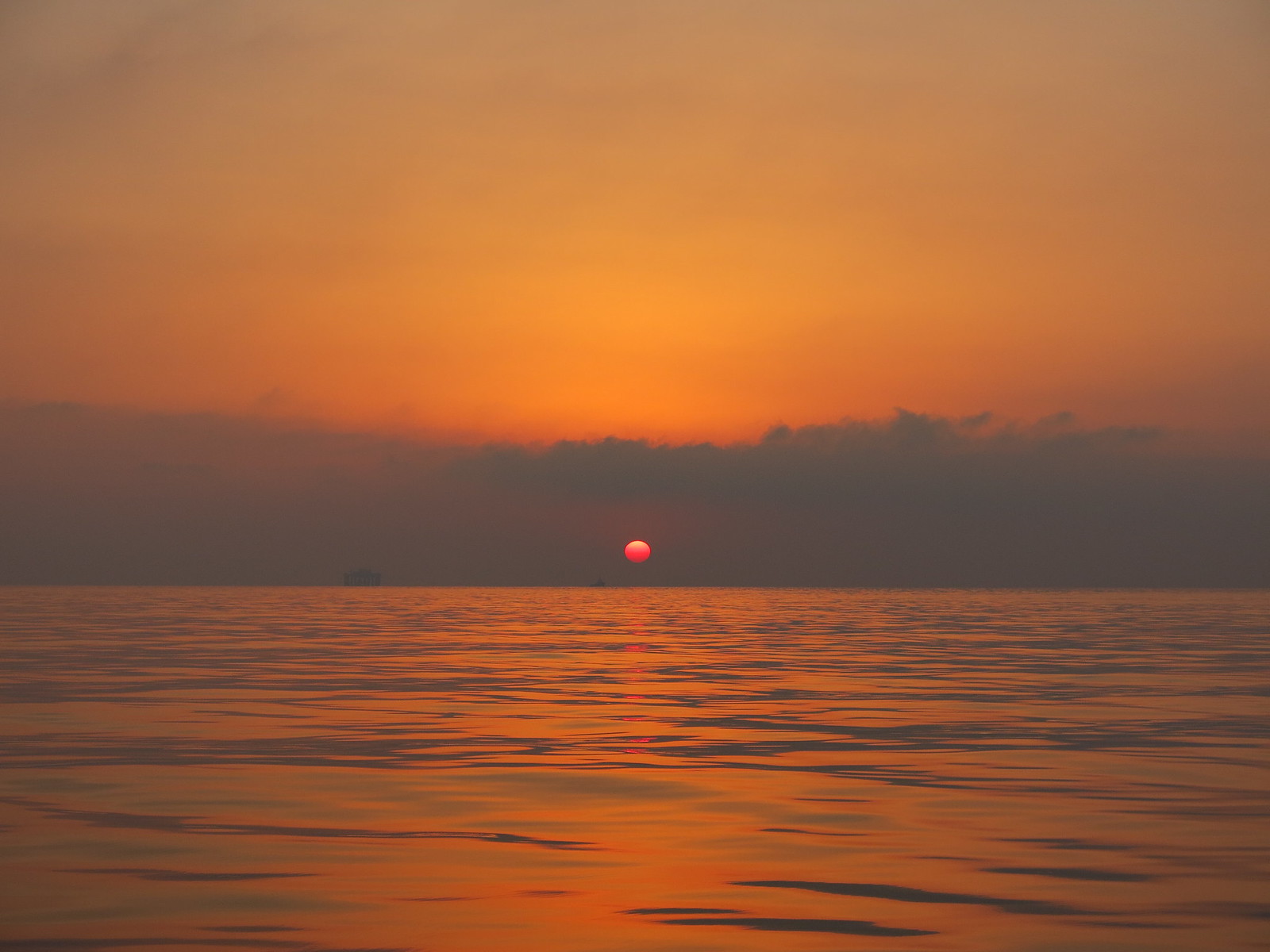 We pulled in to Marina Smir which is 26 miles across from Gibraltar and it was hopping with beachgoers and jet skis everywhere but not many yachts and plenty of slips available. We pulled up to the fuel dock to check in to the country which went smoothly and were assigned a berth. But when we got over to the area where our slip was to be it was in a sea of jet ski dockage (the most common vessel around we noted) and there was even a jet ski float occupying our assigned spot. Back over to the fuel dock to inquire about a vacant berth, preferably in an area where yachts go! They gave us a good spot this time. Ashore in the marina complex, it was funny to see the customs officials sitting down at a card table under a tree to eat lunch together out of a big communal platter. They do 24 hr shifts and sleep upstairs so there is always someone on duty no matter what time you arrive. Later on in the evening, we saw them lined up on a carpet facing East bowing in prayer. But unlike Indonesia, we heard no loudspeakers calling them to do so. I will never forget the volume of those calls in Indo. 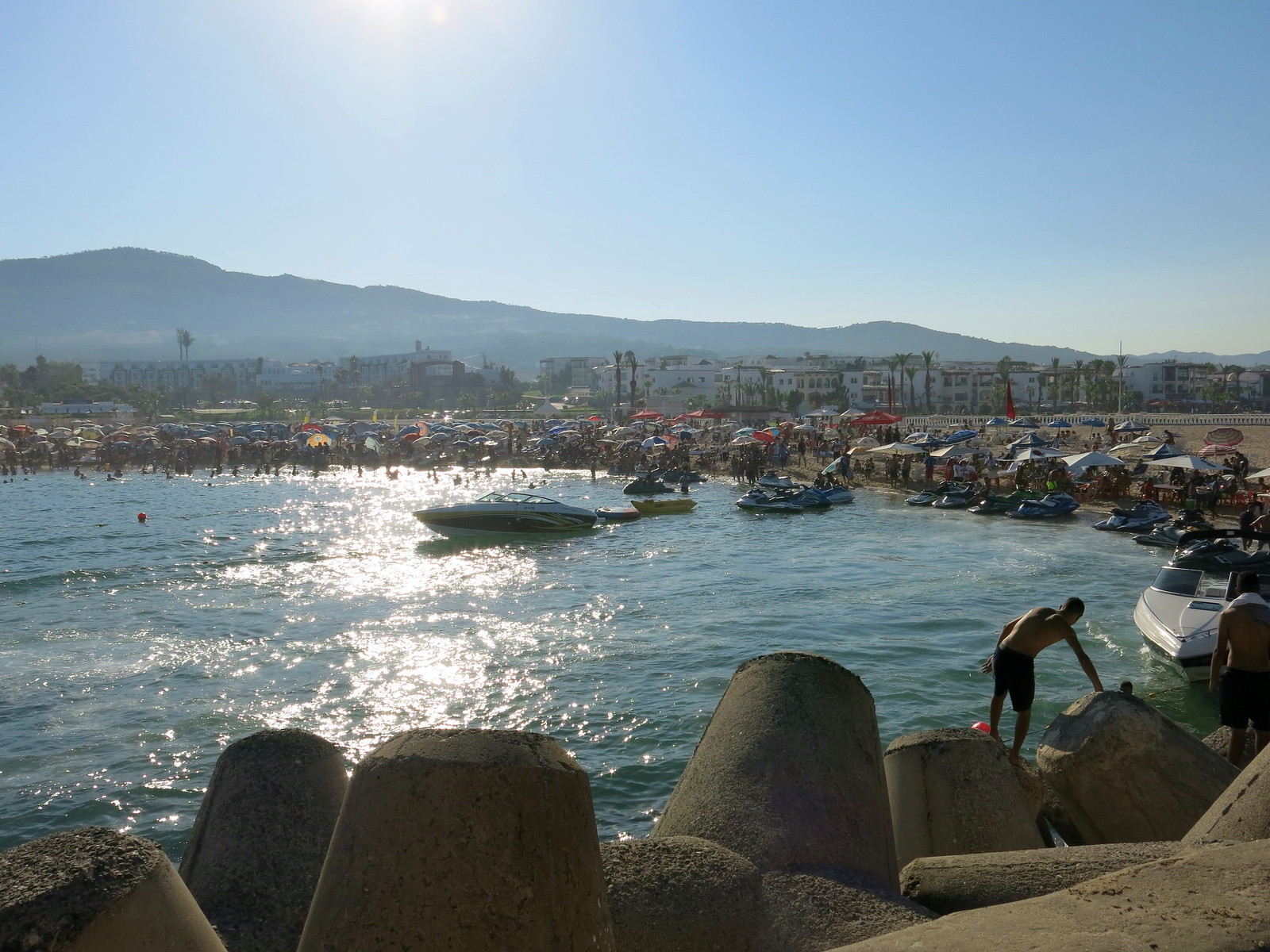 We inquired about getting in to the old city of Tetouan for the following day and were advised that rather than try to take a bus or get a communal cab, we should hire a guide and a private taxi. We generally dislike being insulated in this way but went along with it to avoid any hassle and to try to be normal. For the rest of that afternoon, we just walked the marina complex which was nothing special and we generally didn't like the area as it was mobbed and a bit run down. 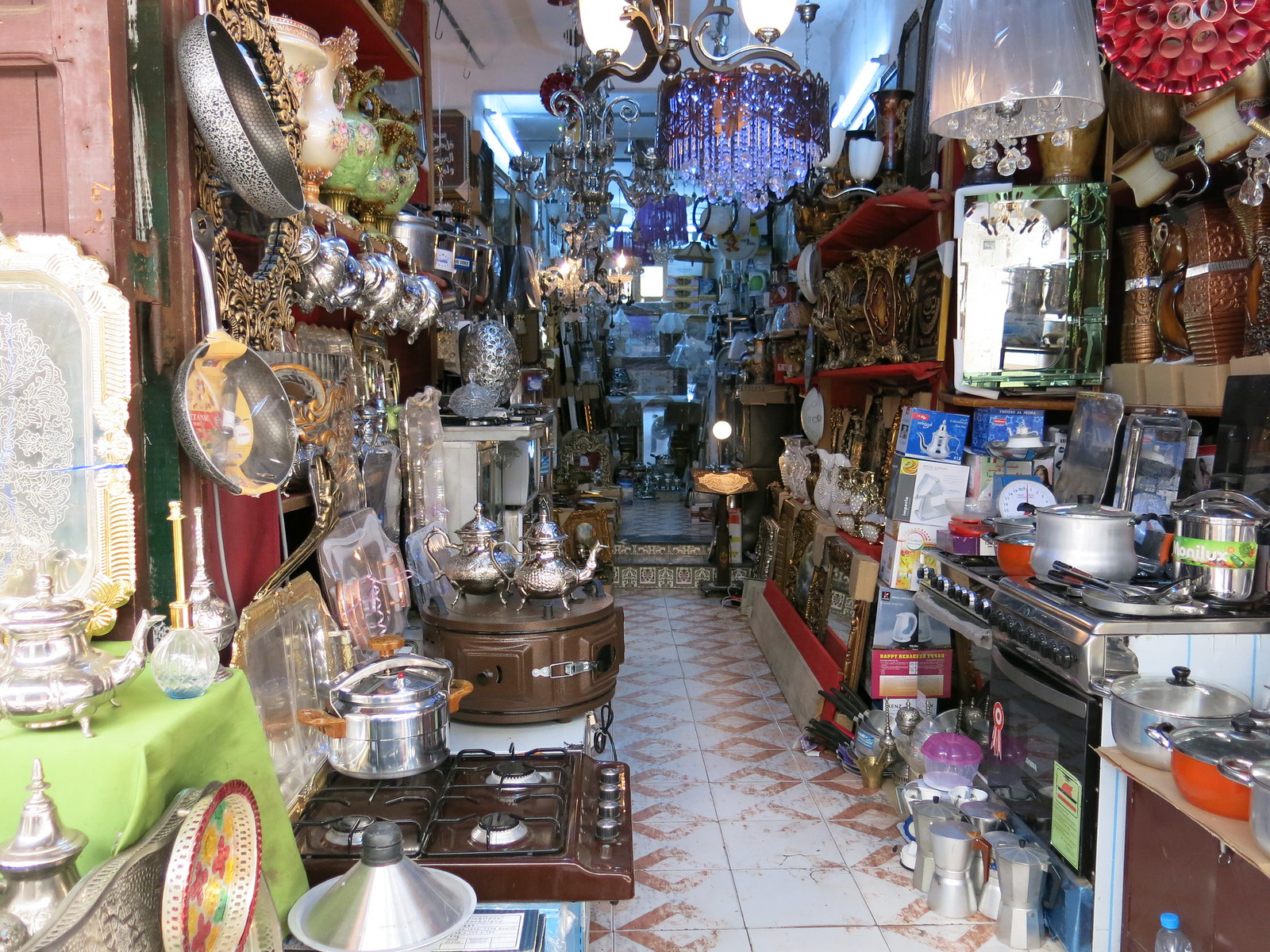 The city of Tetouan is a UNESCO recognized site and is about 45 minutes from Marina Smir. Along the way there, we passed the summer residence of the Royal Family and were impressed with the cleanliness of the surrounding streets and the beauty of the landscaping. There were many workers along the road making sure every leaf was picked up. We met our guide Khalim on the outskirts of the medina in our private taxi and then began strolling around together. It wasn't too long ago that I didn't even know what a medina was but now I know it is the old Arab quarter of a N. African town. Marked by the narrowest streets we've encountered so far, it is just for pedestrians and in a maze that can be difficult to keep one's bearings in. There were lots of mosques but they were closed since it wasn't time for prayer and we usually cannot enter them anyway. In the market area there were all manner of goods for sale from clothing- mainly djellabas to leather goods, chickens and fruits & vegetables. They also make their own cheese. There were also all the dye colors you could choose to paint your walls or the walls of the medina. They tan their own leather in the medina and we got to see the area where they do this with some leather being cleaned but for the most part, all was quiet since it was Saturday. I think smells were less too! It was really interesting to peek into alcoves and see the residents of the medina sewing shoes by hand, using small looms to make clothing, rising & baking bread in wood-fired ovens, hammering out leather purses and belts. There was a lot of hustle and bustle and it felt like it was thriving. 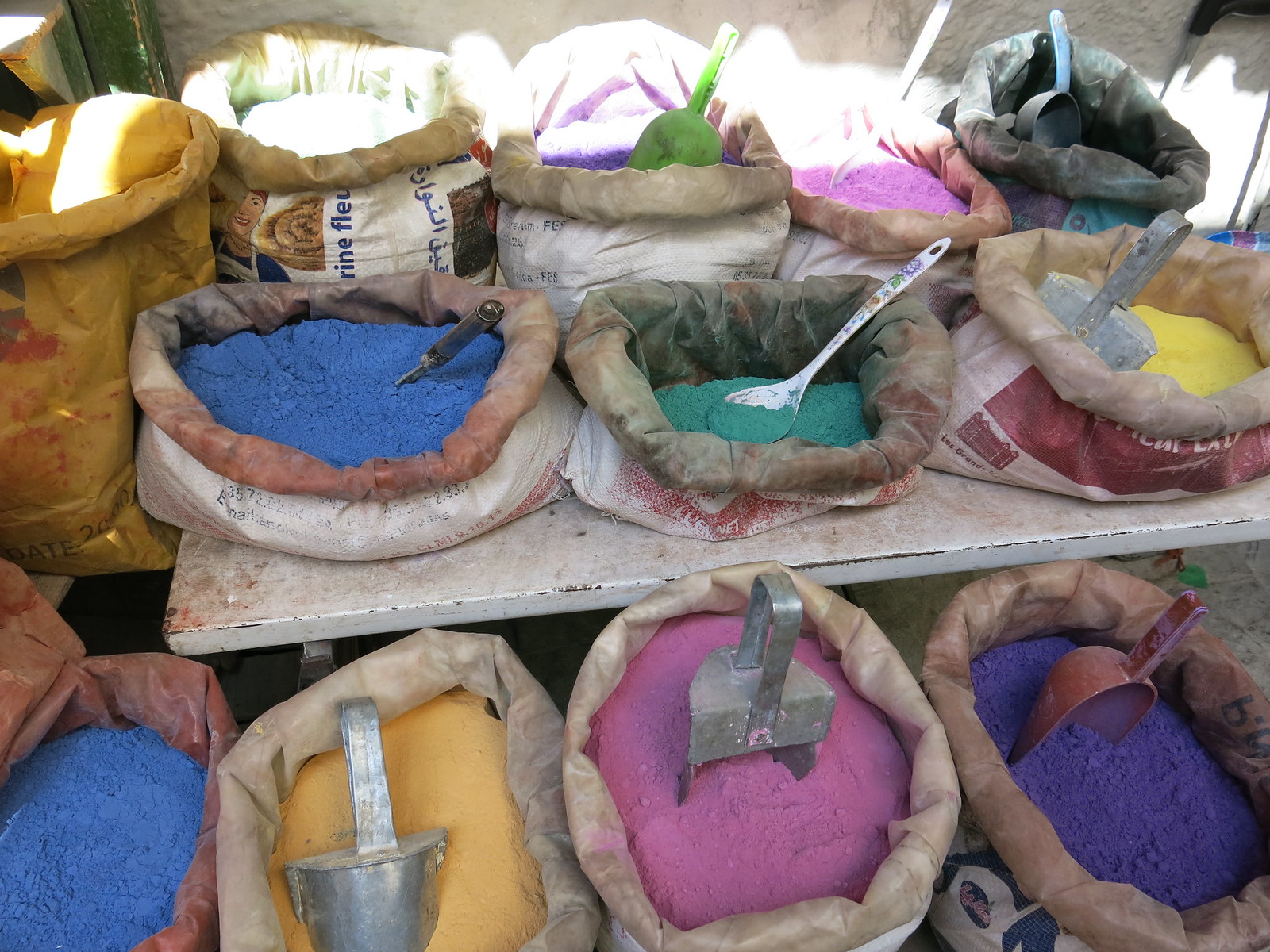 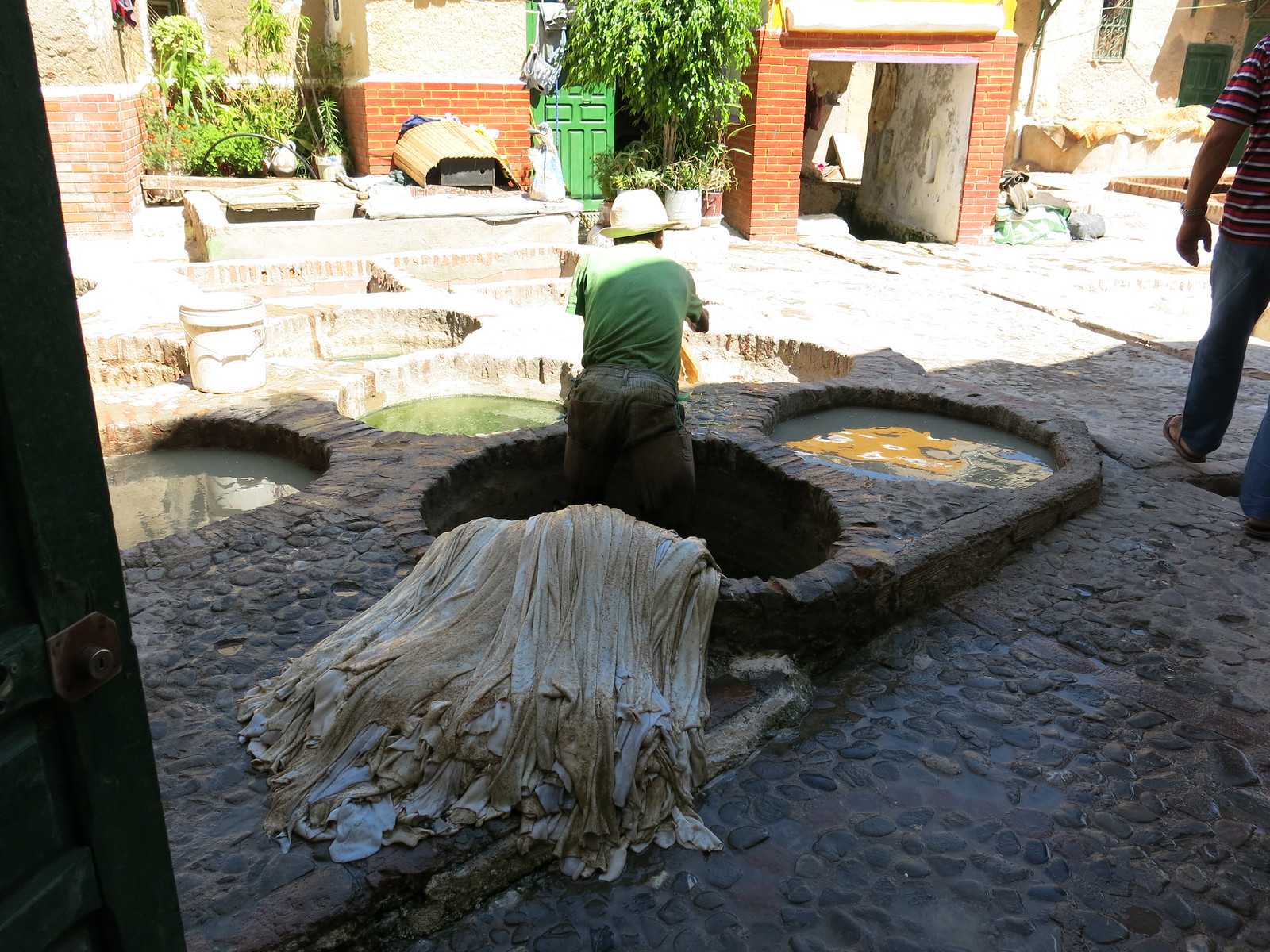 One thing is there were plenty of cats. Even though they lived outside you could see they were being cared for. This mother with kittens was lying in her cardboard box and had the greatest eye contact. I think that image is what I will carry with me the strongest for this visit. 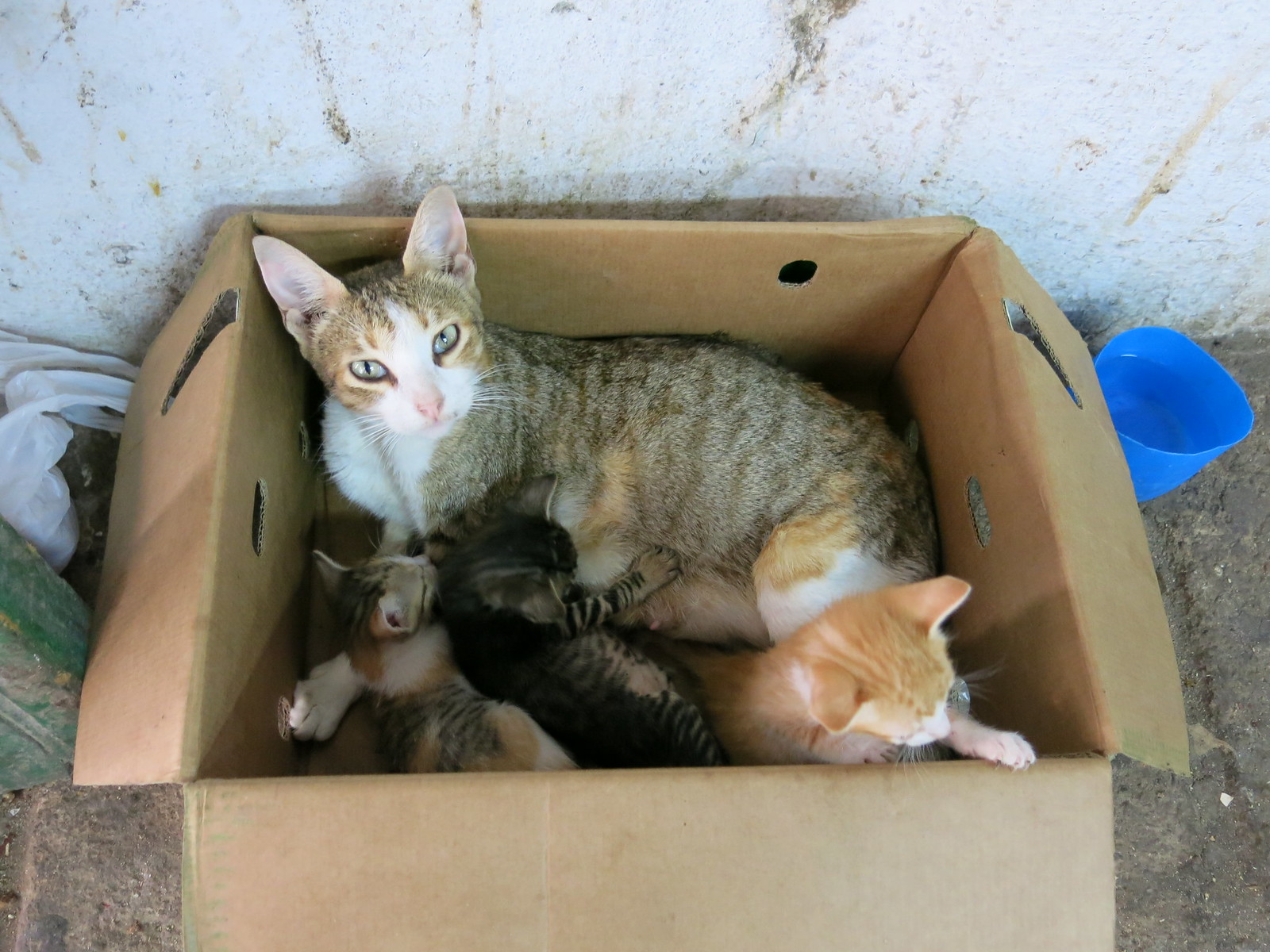 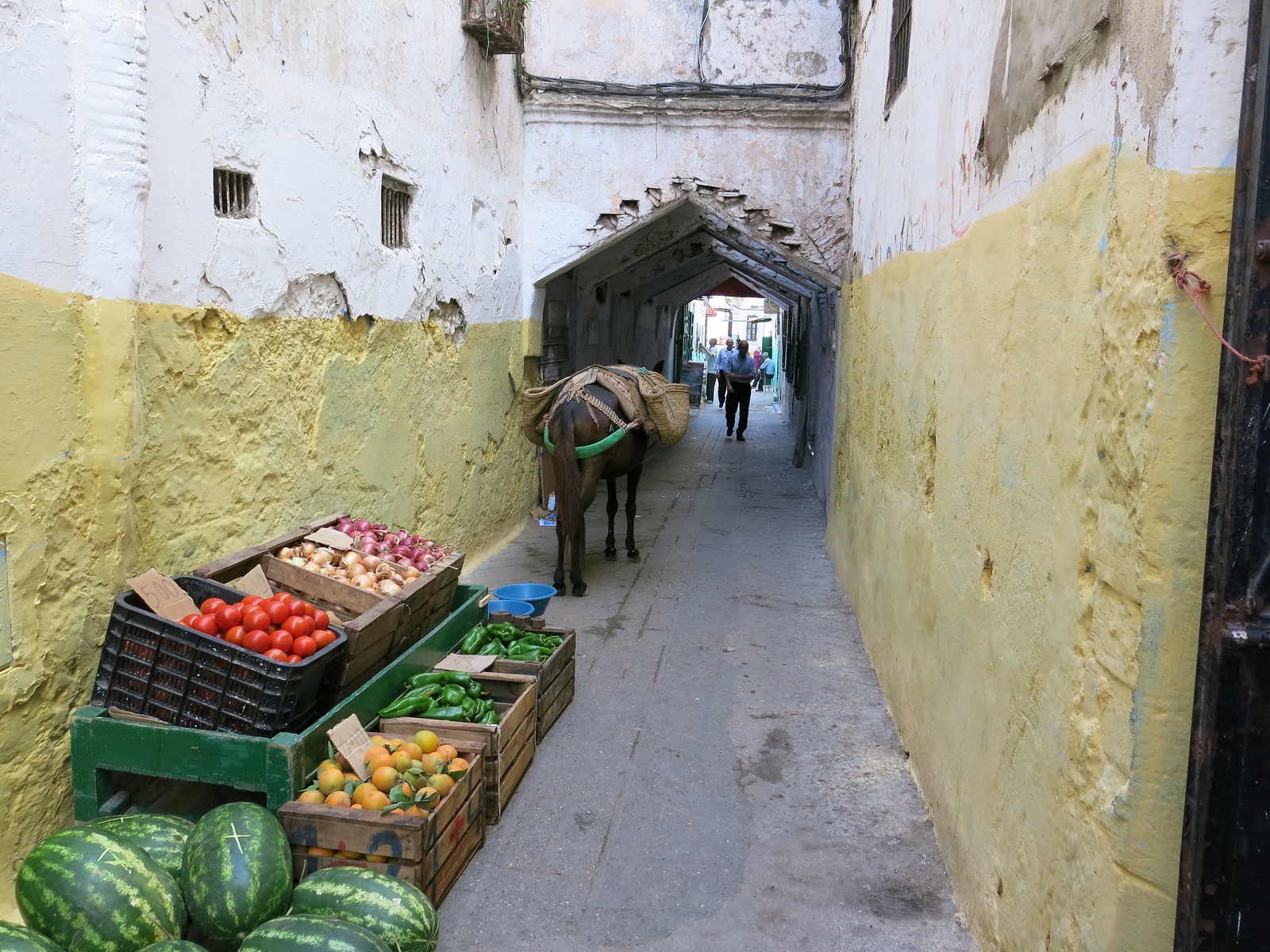 Since we had a guide we were looking forward to learning a lot of history about Tetouan and getting sort of an in depth tour but really, our guide was pretty busy smoking and talking on his phone, but he was nice enough. He also kept bringing us to shops where the storekeepers would try to sell us carpets, trinkets or something other that was "a good price for you". Everyone would ask where we were from and then say the words 1000 welcomes or welcome to Morocco. They were very nice about us not wanting to have a huge rug on our boat but that didn't deter them from rolling out one rug after another while we sat with a cup of strong mint tea in our hands. Toward the latter part of our tour of the medina, our guide Khalim turned us over to a friend of his because he needed to go home and give his wife a key. So, we did another rug joint, saw another rooftop view and then were showed back to our waiting cab. We blasted back to the marina like we were in a rocket ship. And to a late lunch on board our boat. We were kind of in a state of I'm not sure what.

We had a nice time. We are very familiar with all of this though, this general feeling of "Huh?!" but have been removed from it for all the time we've been in organized Europe. It reminded me of this saying in SE Asia "same same but different". We have really been enjoying our independence and ability to do our own thing and buy what we want when we want. Anyway, given that we didn't care for Marina Smir and none of the major sites in Morocco are near it, we decided that as long as we don't get distracted with something else in the meantime, we'll head to Rabat, Morocco on the Atlantic side on our way to the Canaries to see more of it. From there we can easily train to Marrakesh where it seems most of the most important sites are. We would really like to see the Sahara still! And, I never got that camel ride. We're looking forward to trying to make that work. 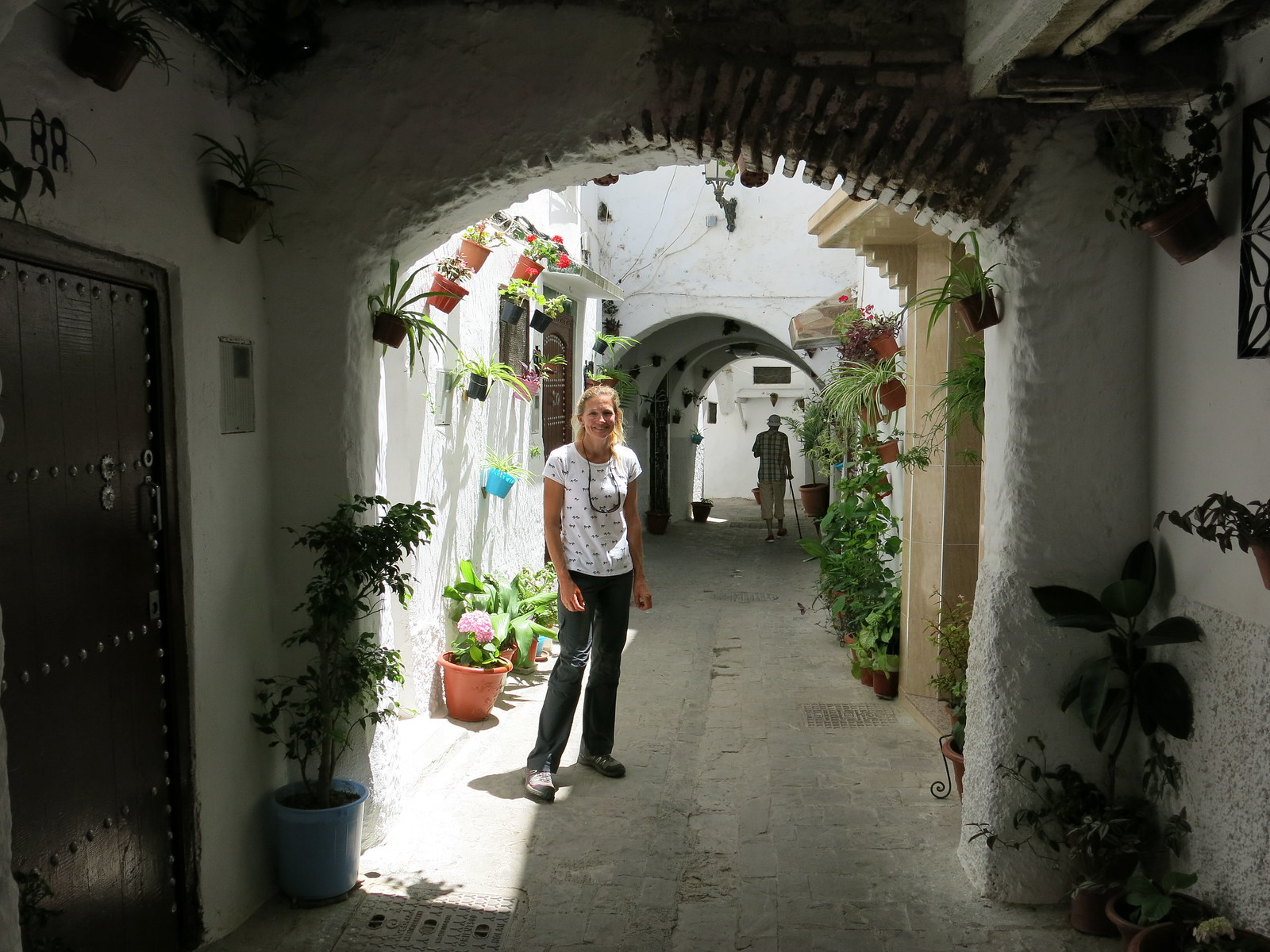 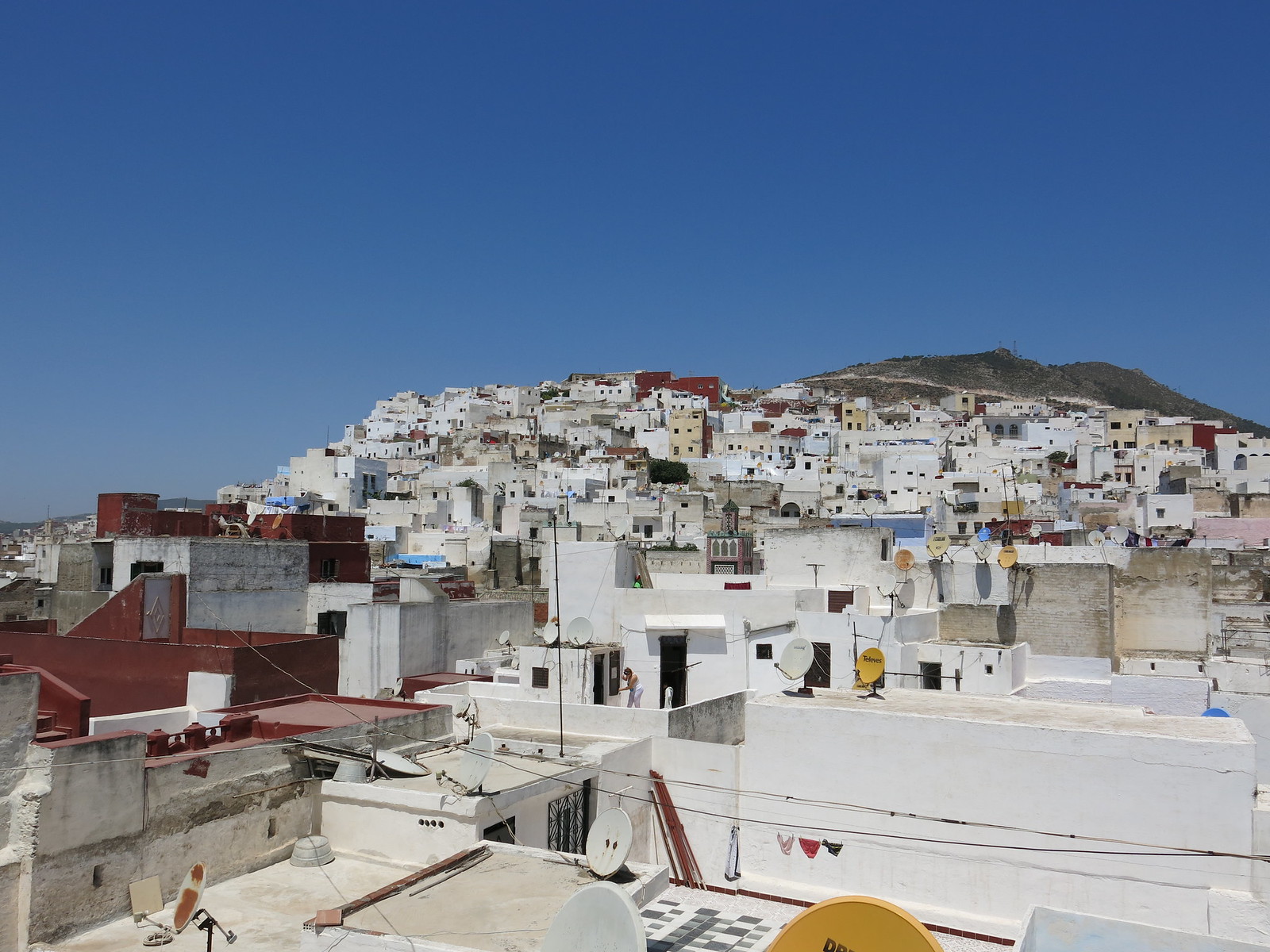 The following morning, we topped up with bargain fuel, checked out of Morocco and bounced our way back over to Spain into lots of wind and current. We finally saw the rock of Gibraltar! We pulled into Marina Alcaidesa which is steps away from the runway and Gibraltar border and at night the rock is lit up over the bow of the boat. We're officially checked back in to Spain and the boat is all set too. Yippee!
More
Comments
Newer Older
Contents