We let our boat have a week's rest in La Linea, Spain while we checked out Gibraltar and did a little land travel. Marina Alcaidesa is up in the bay so while all the wind is happening most days in the Straits, it is calm and hot inside. It was a 10 minute walk to the border of Spain & Gibraltar and crossing is easy to say the least. You have to show your passport as you walk by the officials who may or may not look at it. Then you walk a little further to the airport runway, most likely wait for a plane to land or take off, then the gates open and you can continue on to the rock! It wasn't too unfamiliar to hear British accents as Spain is full of British people especially in the Baleares and along the east coast of Spain where all the sun is. But it did seem odd to see signs in English. We spent a couple days seeing the sights and trying to absorb a bit of all the history. And in the grocery stores there we skipped out with several jars of peanut butter & decent crackers since the Spanish aren't into these items but we are. 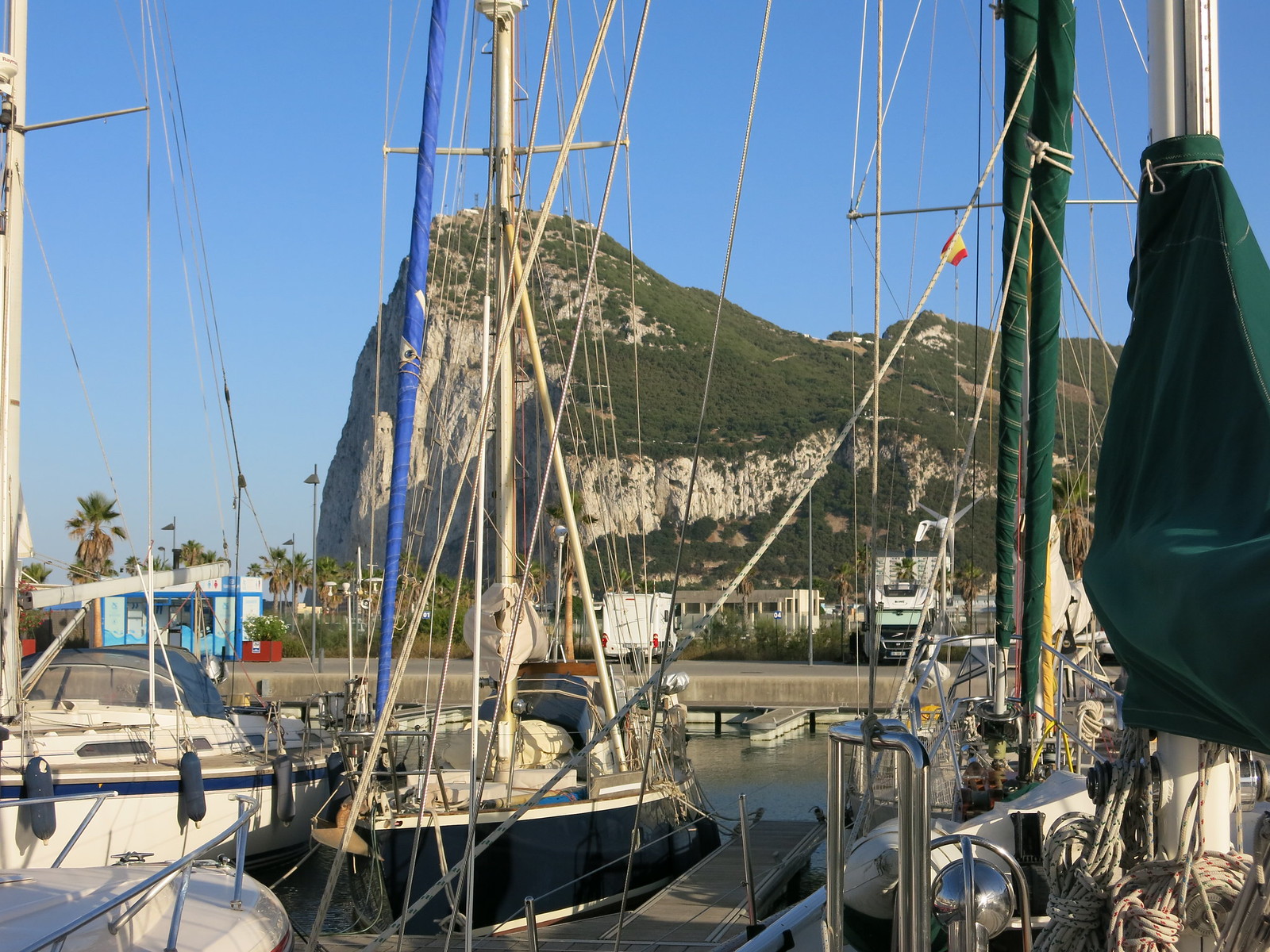 We spent all of one day on the upper rock visiting several interesting places. These included an old Moorish castle that was built in the 1300's & a very large and beautiful cave called St Michael's. I think it is one of the largest caves we've ever been in and was apparently used for a hospital during WWII. It is now periodically used for concerts and of course daily tourists. They had parts of it lit up with colored lights. 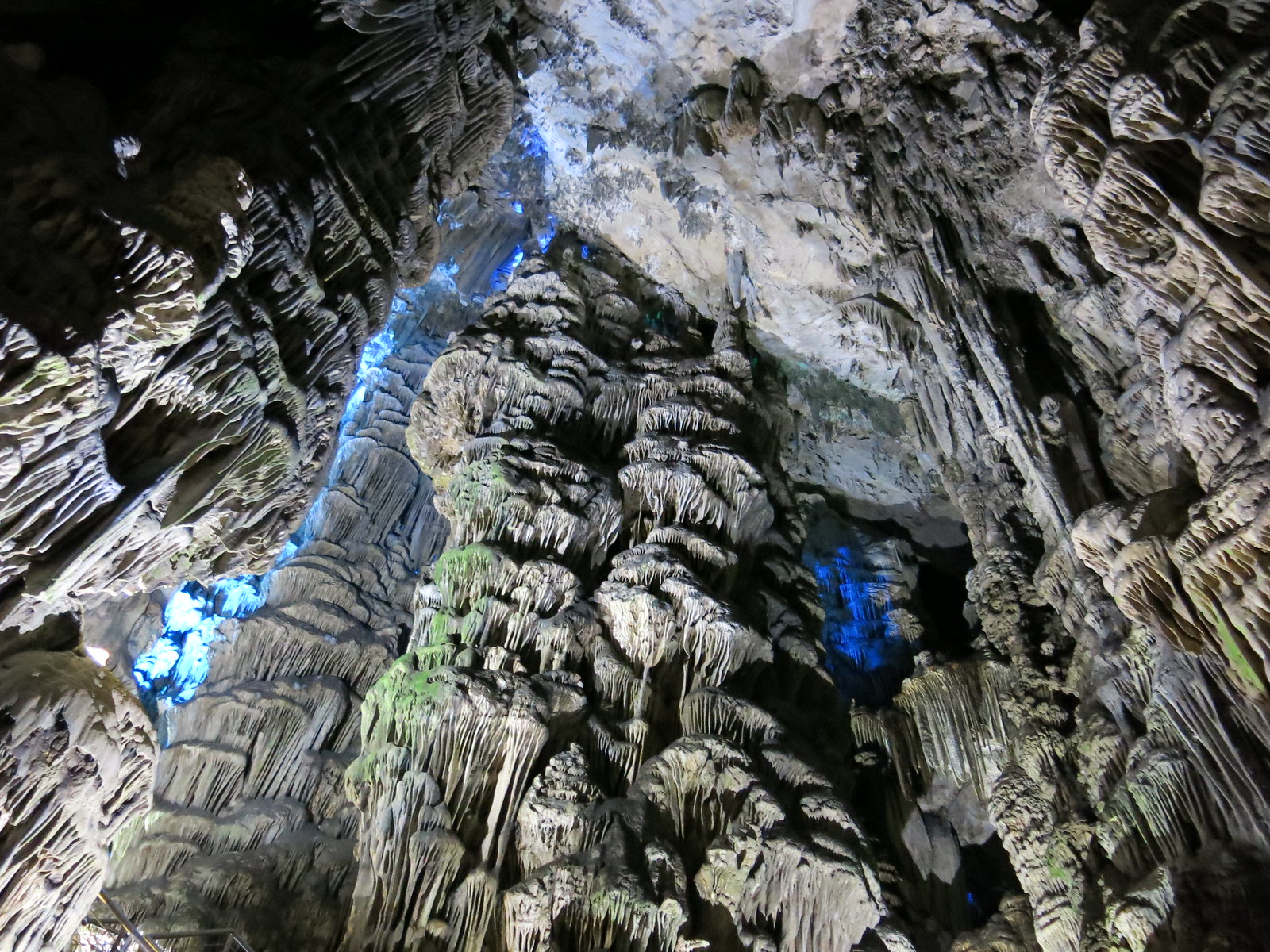 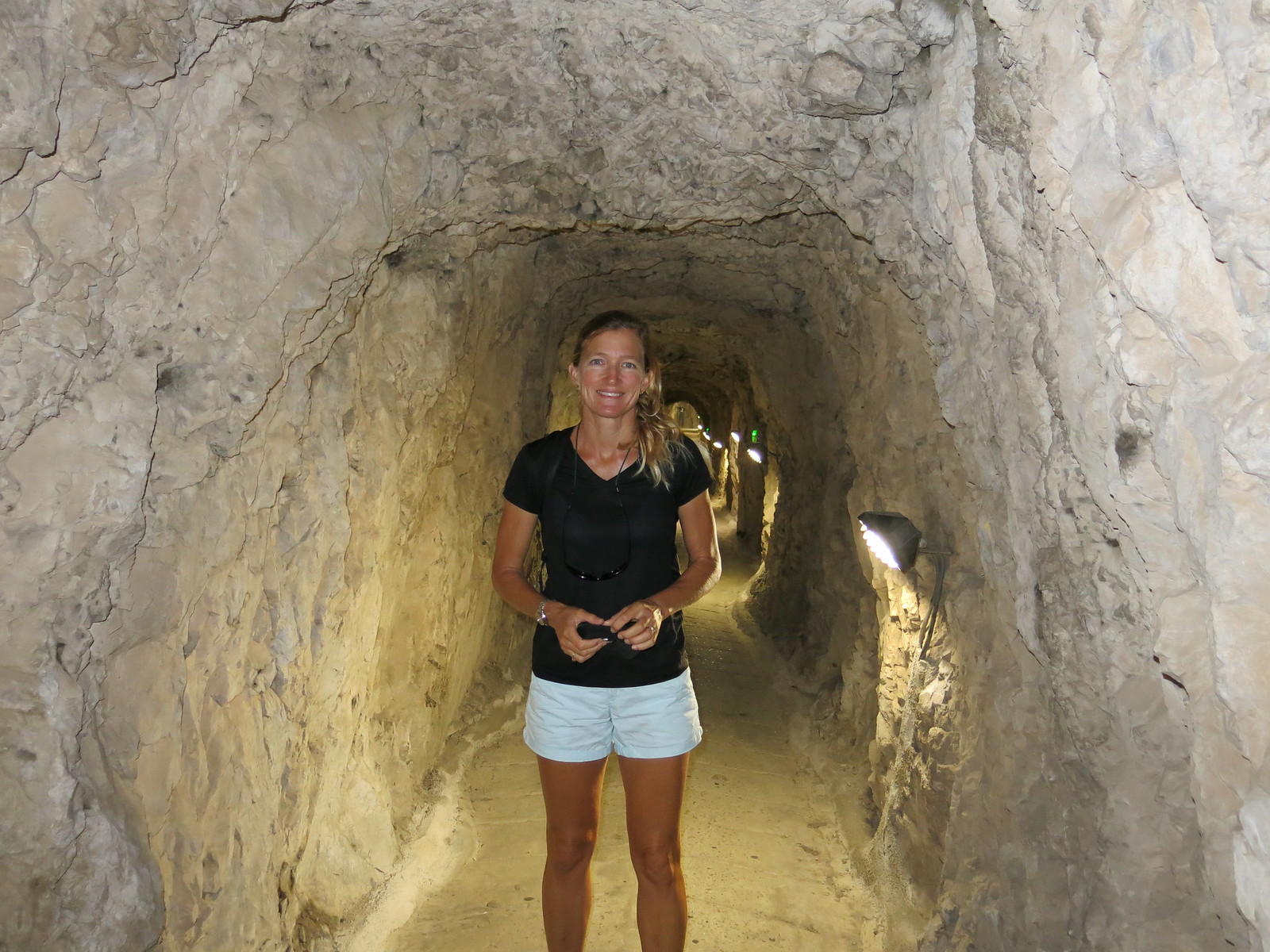 Our favorite parts were the Great Siege Tunnels, the Mediterranean Steps and of course the macaques (tailless monkeys) which helped us (or at least me) get over our bad memories of monkeys chasing and baring their teeth at us on trails in Malaysia! We met some really mean ones (there were a lot of sweet ones too though) that scared the crap out of us. But these were very nice and one even used my shoulder as a springboard to get from one wall to another and it felt light as a feather. Many were nursing babies and doing that nit picking that monkeys seem to love to do. I think Jon is still a little scarred though from past events. There is a potential fine of 4000 pounds for feeding a macaque but this doesn't apply to tour operators who feed them peanuts for pictures. 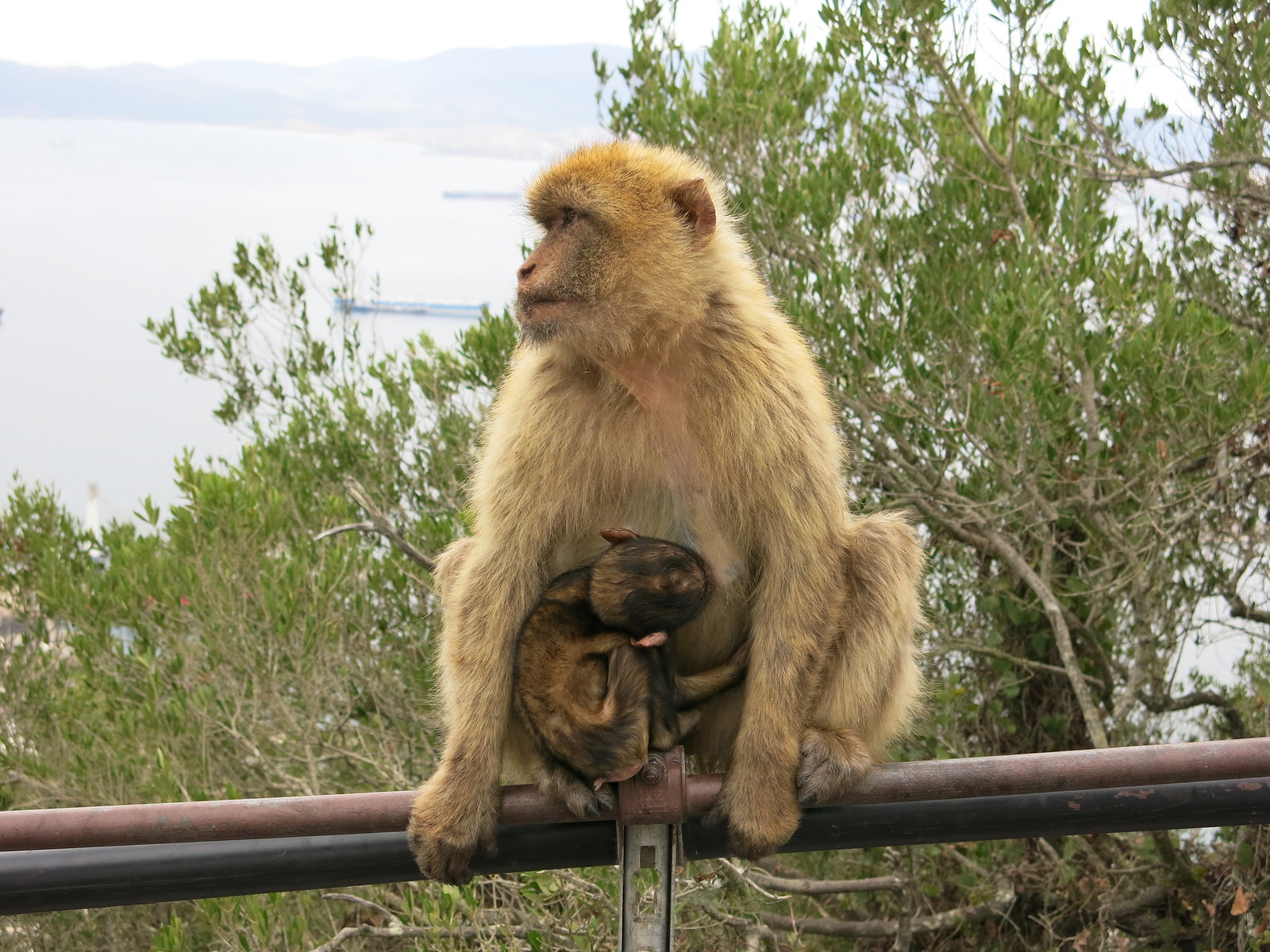 I hadn't realized that the Rock of Gibraltar isn't solid rock as it is filled with some 70km of tunnels! A lot of them were built in 1779 by the British during the Great Siege to protect themselves from Spanish & French attacks. It seems unfathomable that a whole garrison of men could live in these tunnels for up to a year with all supplies. And later on, more were built during WWII. Dwight Eisenhower was even holed up down in the tunnels in 1942 while organizing forces to go into N. Africa. We certainly have never been in any tunnels as long as these, except in cars or trains and they were very interesting to stroll through and read all the exhibits. 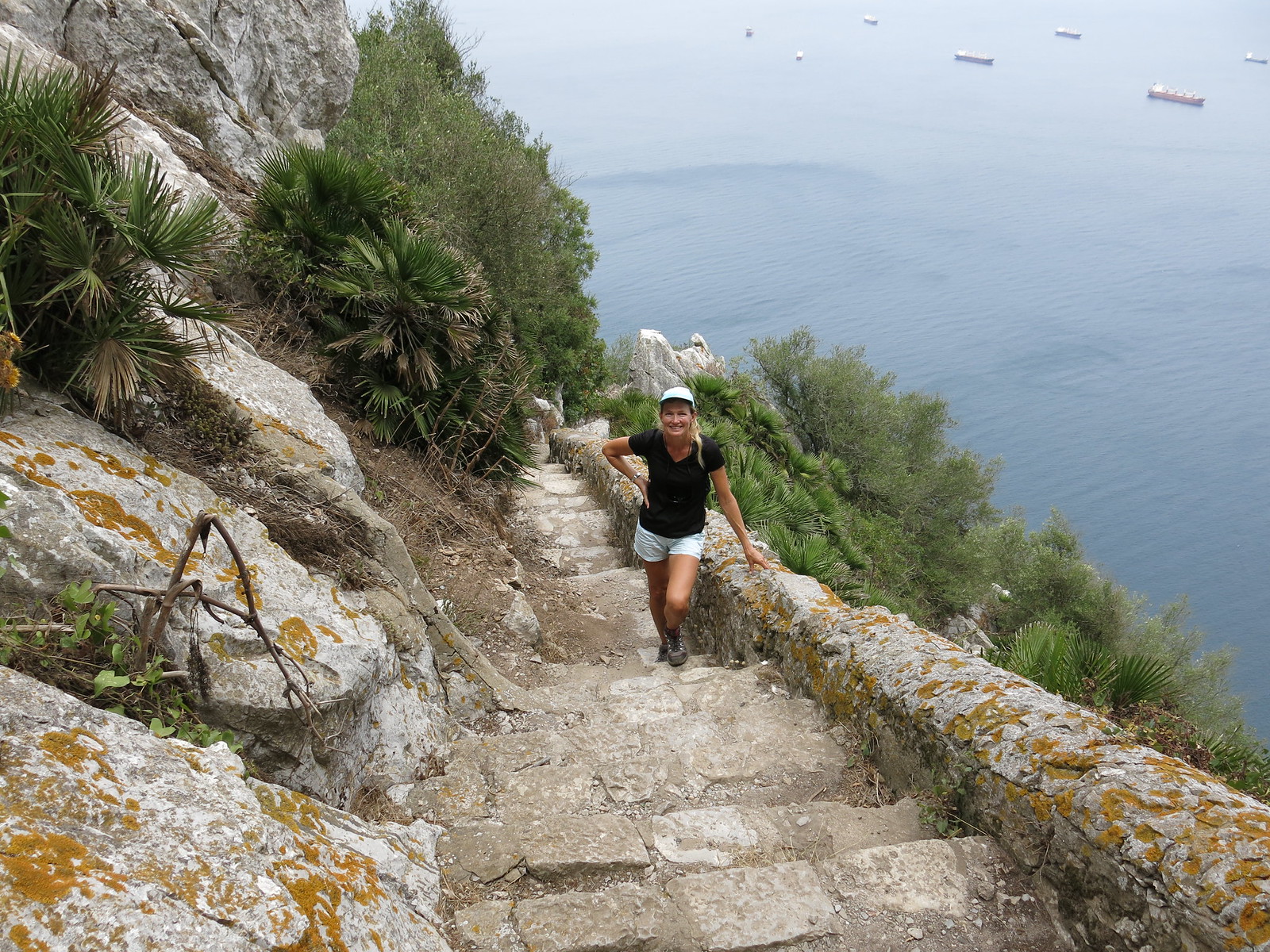 There were some trails that linked the sights but the best one was on the SE side of the rock where there was a steep, winding stone staircase that no one was on. It was the only place you could get away from the crowds and see something of what Gib would have looked like before all the stone and concrete were laid. It was a hazy day and we were quite happy to have a break from the sun & heat and we still got some good views of the Straits. It was a really fun day and another milestone in our travels. I have thought about visiting this place for YEARS! At night the rock was all lit up right off our bow in the slip. 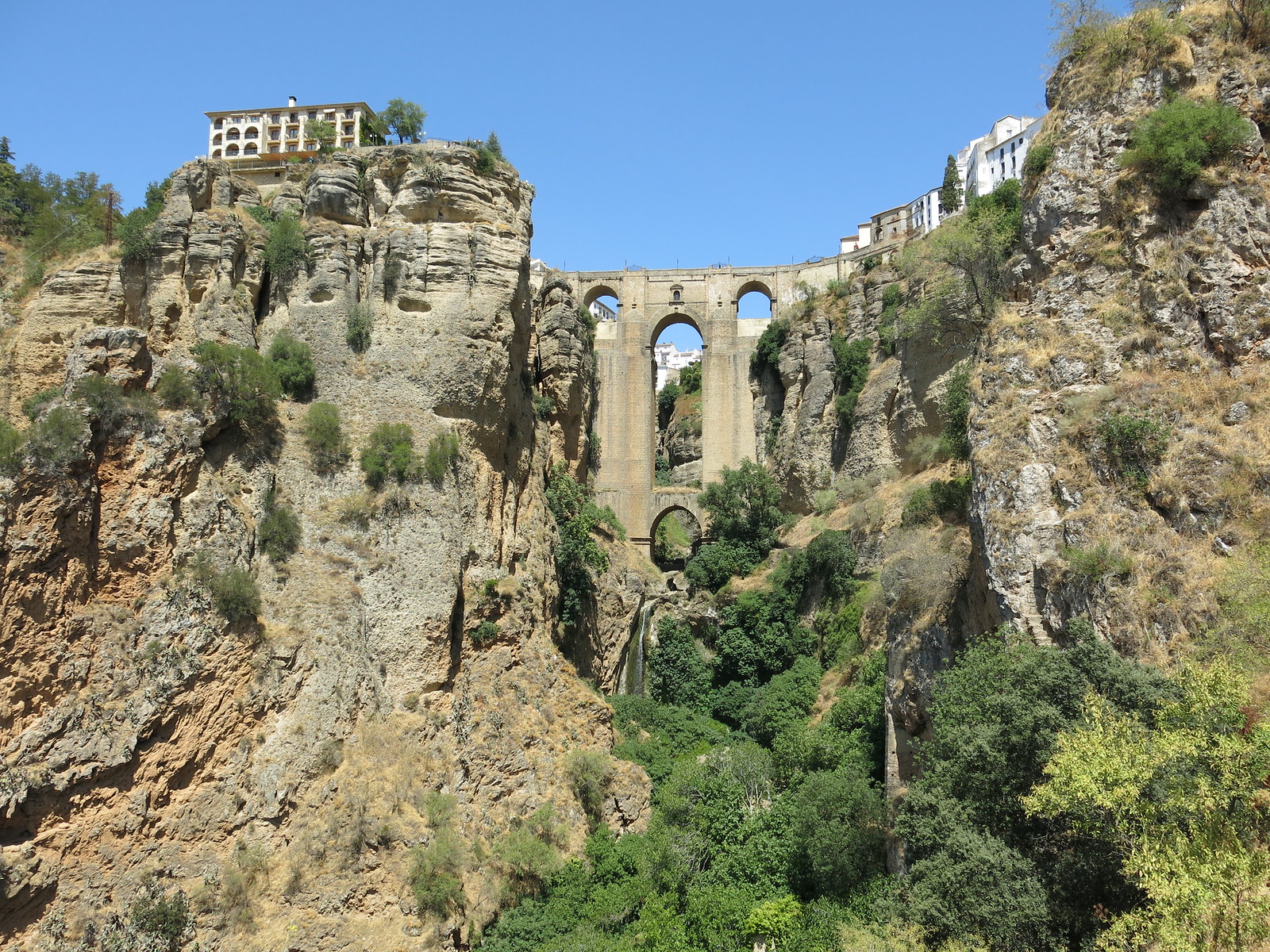 I had decided that I wanted to visit the mountaintop town of Ronda, about 45 miles north of Gib as it was spoken highly of in tourist info and looked to be a beautiful setting. We took a bus and then a train up into the mountains to see it and are really glad we did. Jon loved it there! Set on a steep cliffy canyon with a very dry landscape falling away on both sides and a great midevil village with lots of pretty spots, it was very picturesque and felt really old too. It dates to Moorish rule like everything around here. There were several old bridges that spanned the canyon but the most impressive is the Puente Nuevo bridge. Once again, our hotel was right in the center of everything and had an AC that worked really hard to keep us cool. During the day it was 115 degrees and any breeze would glue my contact lenses to my eyeballs. But even so we got out there for some hikes trying to beat the worst of the sun and later we would try to stay in the shade of the buildings ambling along the streets each with our own big bottle of water. For some reason, there was a sports store chain there called Intersport that stocked a lot of good shoes. And there were a LOT of stores- like CVS pharmacies in the US- one on every corner! Since our shoes have completely worn out from being new in January (the sun!) we were worried they wouldn't last much longer, so we both got a fresh pair. The town had such a thriving, picked up, cared for feel that was kind of missing in Gibraltar and rates as one of our favorite places in Spain although I have quite a few of them now! I read that Michelle Obama visited here in 2014 on a family trip so it can't be too shabby. The train worked out well. 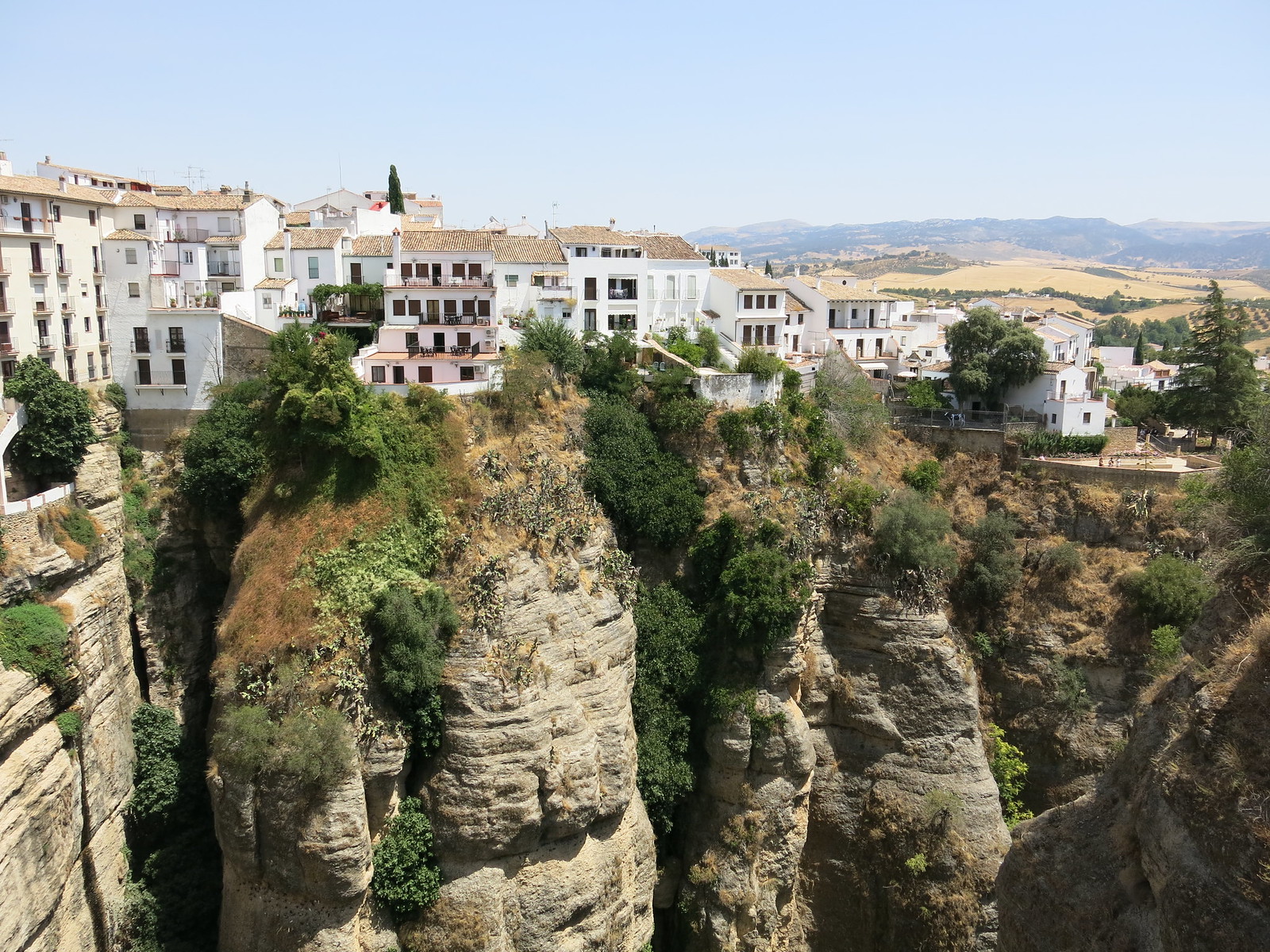 We scurried around the night we got back to get ready to leave the slip and head out of the Med and around the corner to head up the Atlantic coast of Spain & Portugal so we could see some of it. I was feeling a little sad about leaving the Med in the first place because it is so nice and the water is so clear, blue and warm and the weather so mild! And wouldn't you know that first day out we had to round and then anchor at Tarifa point, mainland Europe's southernmost city which is one of the windiest places in the area and gets minimum 30 kts for over 300 days a year. Yippee! Our anchorage was full of swell and wind that gives you that creeped out feel and you are trapped aboard because there is no way you could even get a dinghy ashore without capsizing on a breaker. That night neither of us could sleep a wink and we finally just got up and had a long coffee session waiting for it to get light enough to leave and head northward. We discussed that the wind generator gives us heartburn. While it made over 50 amps that night, it also served to make us more stressed out because it was roaring in the wind gusts and then braking so it wouldn't self destruct. It makes it all sound worse than it is. We like the solar panels a lot better. Jon says he has grown to hate wind. I think he might feel differently in the coming months when he is trying to get somewhere under sail! But as you would expect, as soon as we got away from Tarifa and its reputation for being a great place to kite board and get your hair blown to bits, it settled down and we actually had a nice, albeit long trip to Cadiz. We're starting to see more sea life now on the Atlantic side like different types of dolphin, sunfish, lots of fish jumping and more sea birds. The water is greenish and the air is cooler (much to Jon's approval) and the places we're visiting have been great. 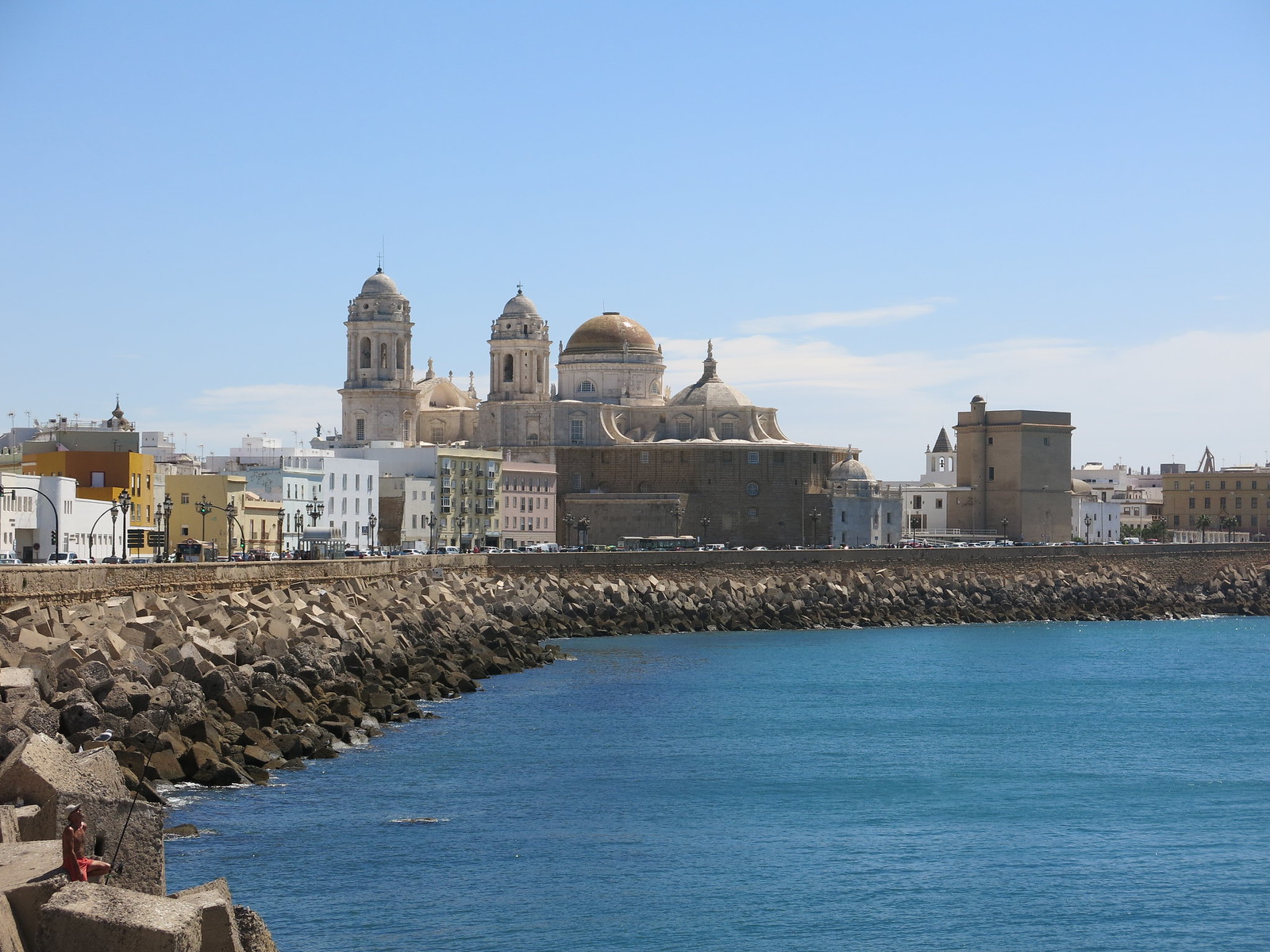 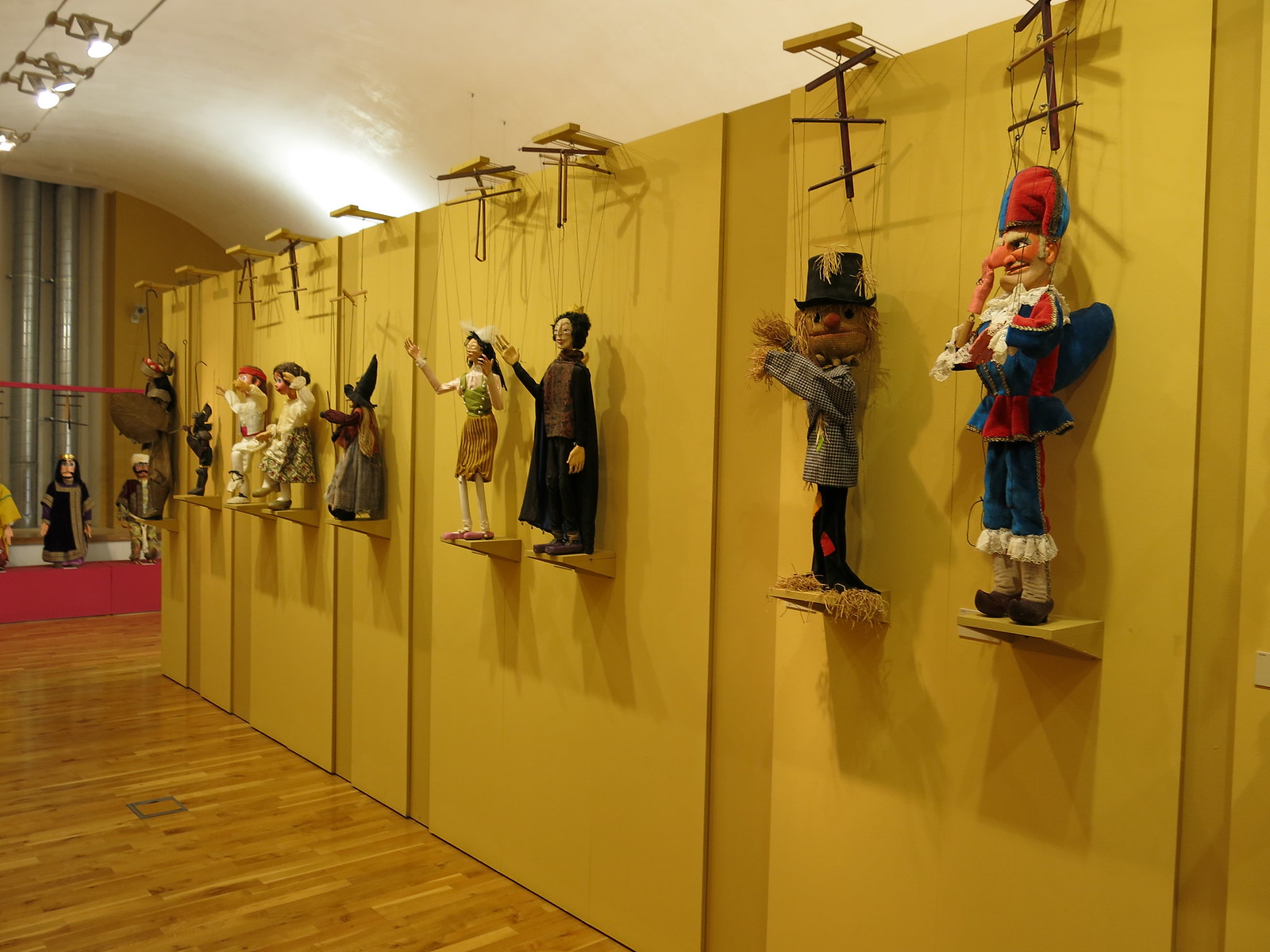 The seaside city of Cadiz is supposedly one of Europe's oldest. It is nice to approach by boat and has a long entrance around a peninsula that the city sits on. We checked into a marina there because there is no anchorage and it was a 20 minute walk to the old town on a promenade. Everything was so ship shape and pretty with old trees, fountains everywhere and lovely plazas. We both just loved this place. Most of the museums didn't even charge a fee and had interesting collections such as one being devoted to puppets and it was located inside the old gateway wall to the city. There were puppets from all over the world including Indonesia, Burma, Russia, China- who knew? And the city museum had this massive model of 18th century Cadiz made of mahogany, ivory and silver. The seaside promenade ran along the shore past forts, parks, beaches and nearing the end, the cathedral. It was a great couple days touring this city. And the cooler weather was welcome. 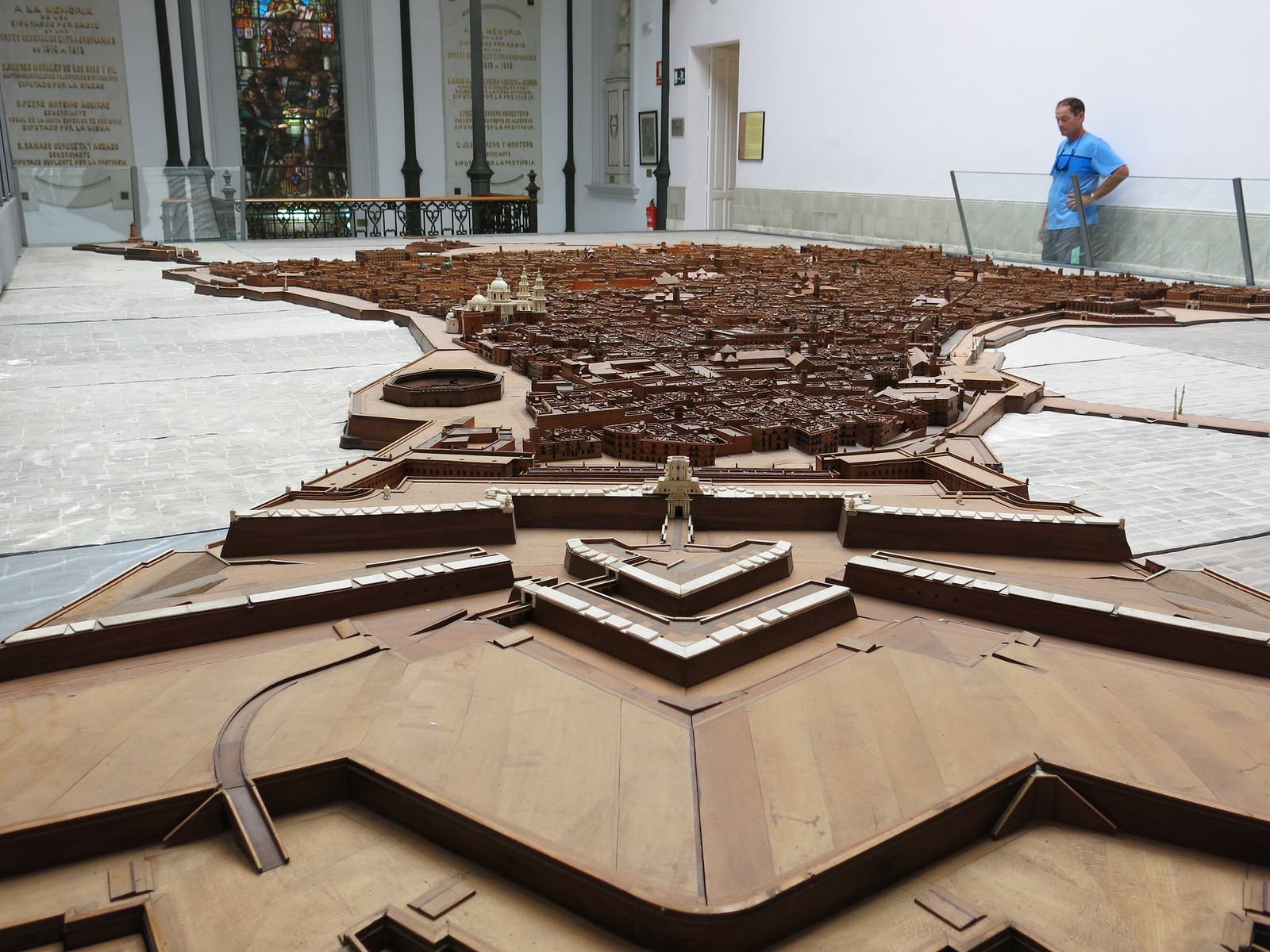 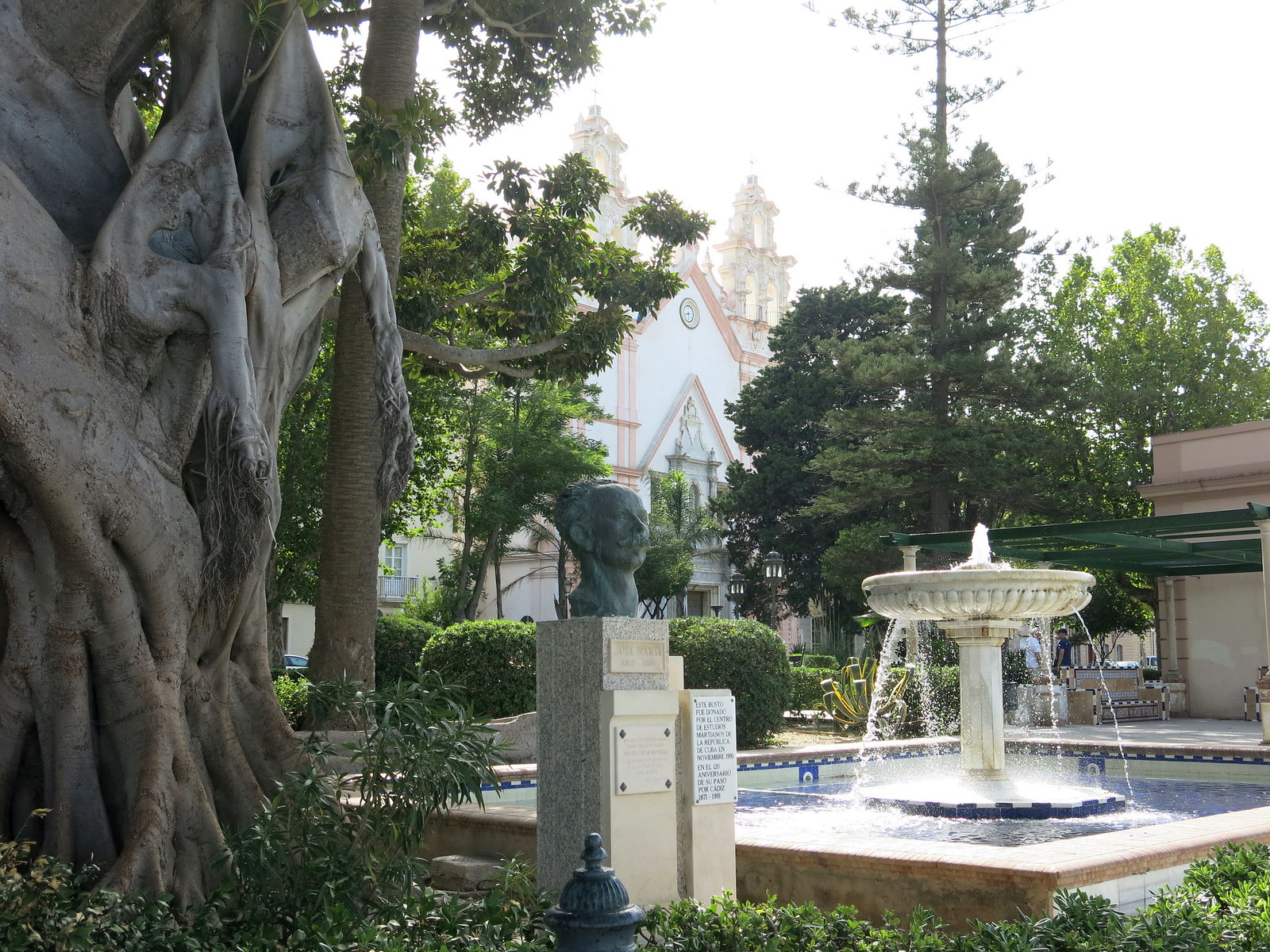 Then yesterday, we cast off at 5am and made our way 66 miles further to the mouth of the Guadiana River which forms the boundary between Portugal and Spain. Along the way, we gave a warbler a ride and it reminded me of all the times in the distant past when birds took a rest on our deck underway. It's been awhile since we've had a visitor like that. The river is really interesting and it was fun to take a walk in Portugal this morning and then in Spain this afternoon! 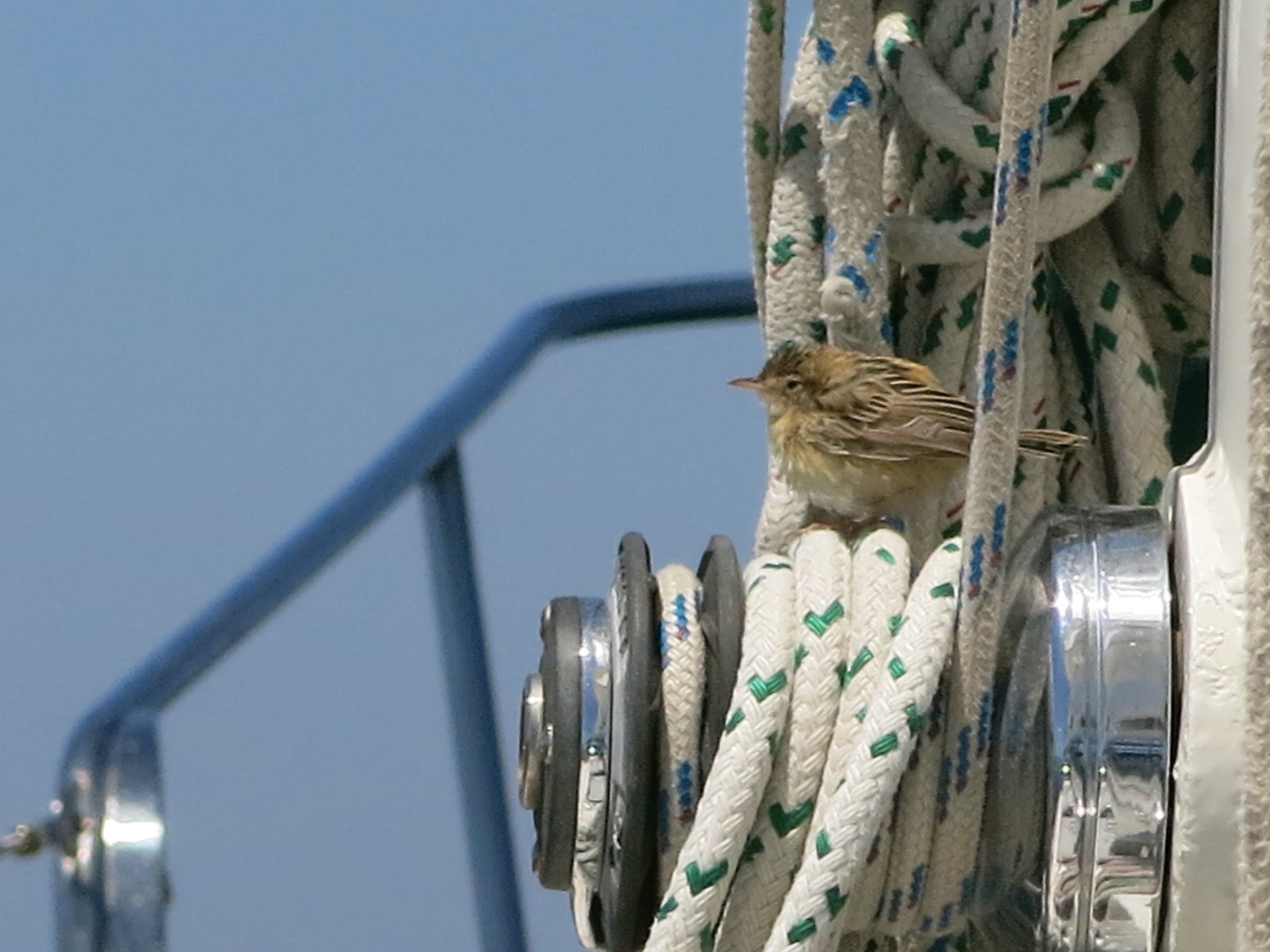 Our sail is on it's way and so we took the opportunity while it is being shipped to head up the river 20 miles to see some popular old river towns before going back down for the hopeful meet & greet with DHL. We've left the cool of the Atlantic for the next couple days as we are inland now and it was 101 degrees today. Jon is panting, my eyes are dry again and the air smells like dry rocks. But the towns are set right across from one another, each with its own fort looking down on us. It is both lively but peaceful here not to mention unique. 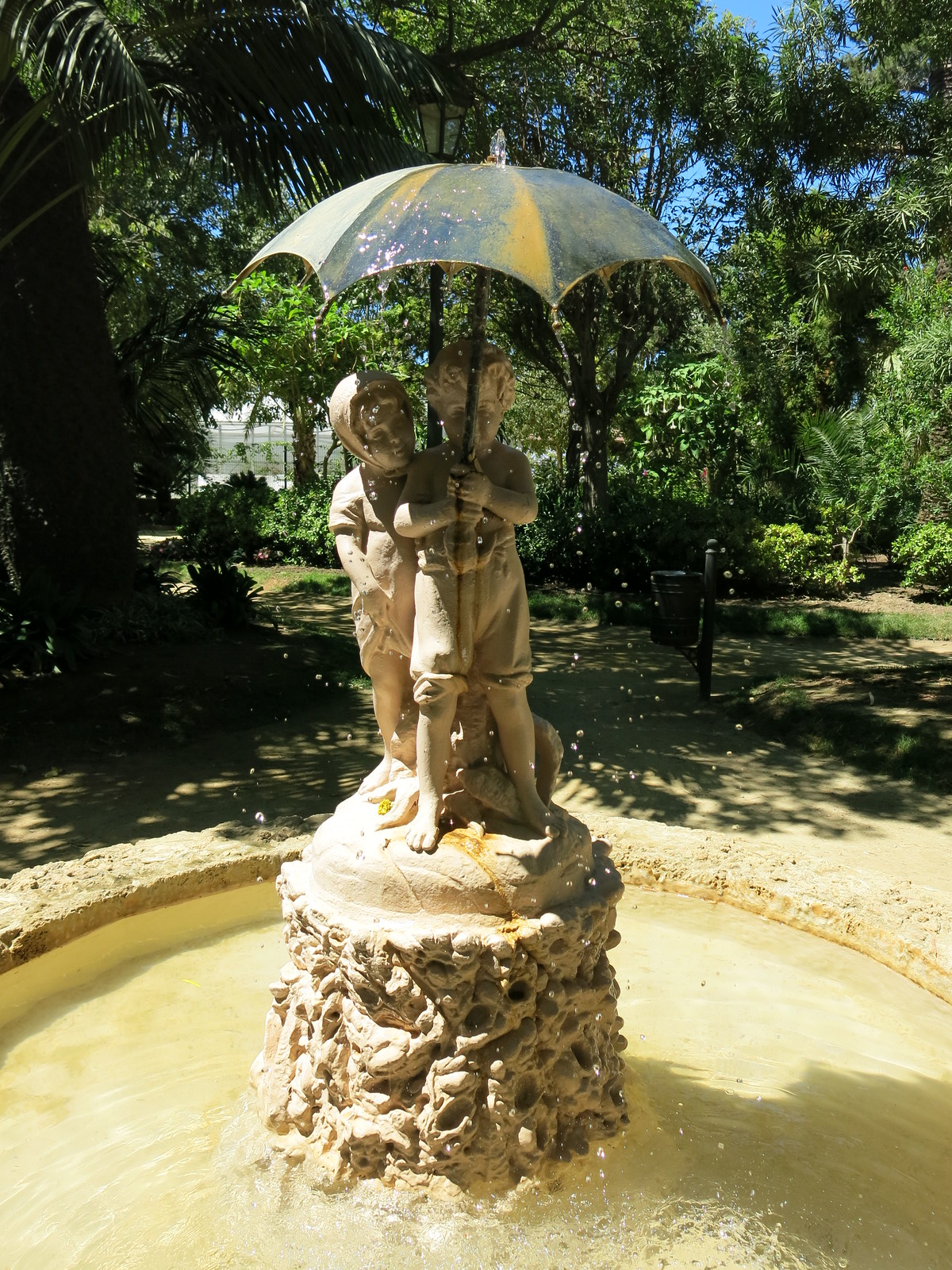