Hurry Up And Wait Our wanderings the past couple of weeks have revolved around receiving a new mainsail and all the hassle that goes with it but we have managed to do a few other things. It has been a bit of hurry up & wait though, several times over.

The few days we spent 20 miles up the Guadiana River that separates Spain from Portugal were fun and a change of scenery. It was nice to be on the hook again after so many marinas. We explored the towns on either side- Sanlucar in Spain where they had a 4 day town party going on while we were there and Alcoutim on the Portugal side which probably wished the river was wider so they could get some sleep! They whooped it up all night each night with a beer garden and several foosball tables (foosball is seriously big in these parts for some reason) and even managed a parade one morning. 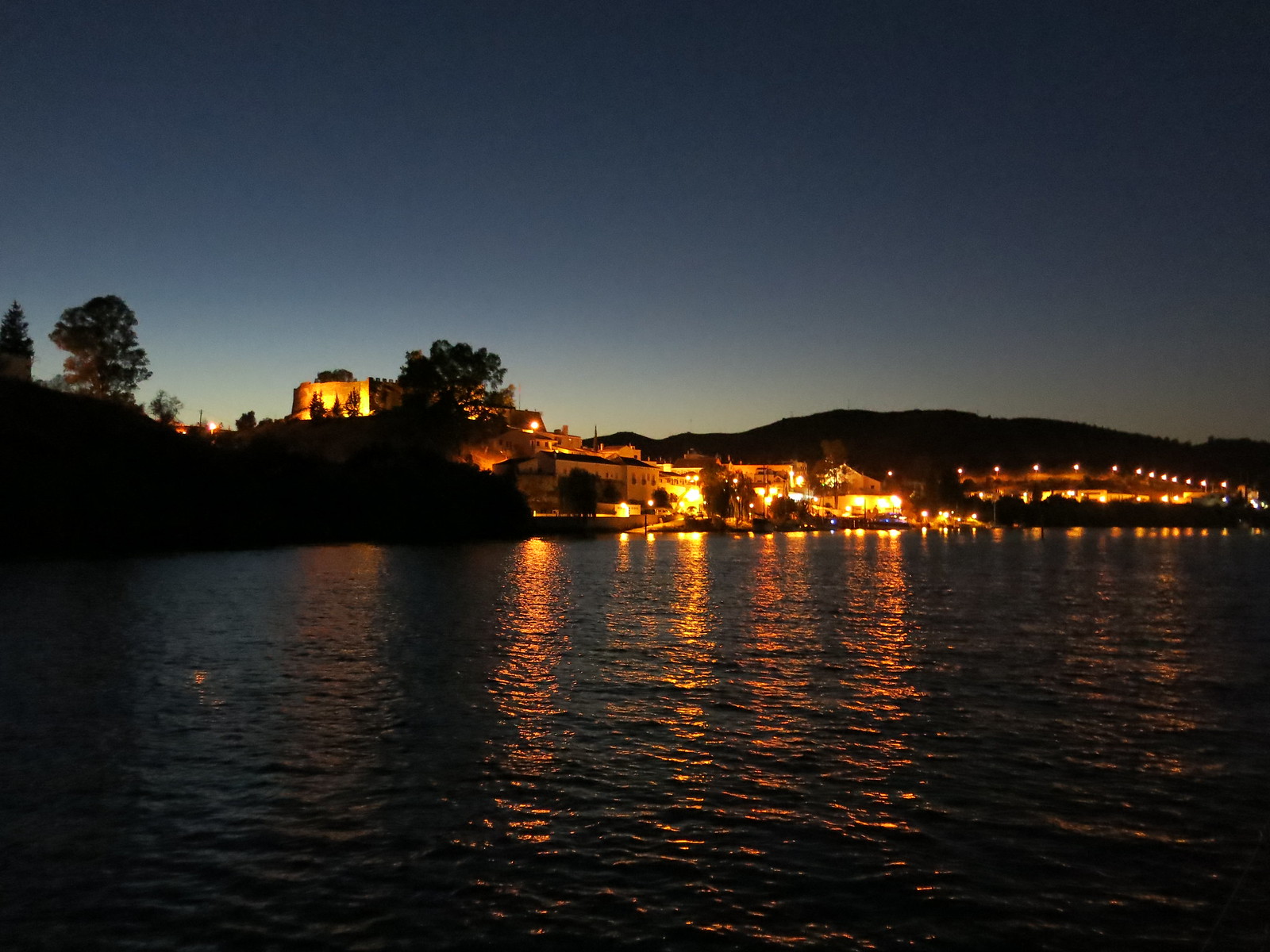 We did a lot of biking- 3 days in a row, on both sides of the river. Being so far inland, the temps were really up there- over 100 again and it seemed like this is the closest you could get to knowing what its like to be in a convection oven. Any breeze would feel like it cooked you more and we are feeling a bit too sunkissed at this point but don't feel like sitting on our duffs either. Who would have known there was a great rail trail that went on forever and in these parts, train tracks have lots of curves and inclines too. Red faced, but happy! 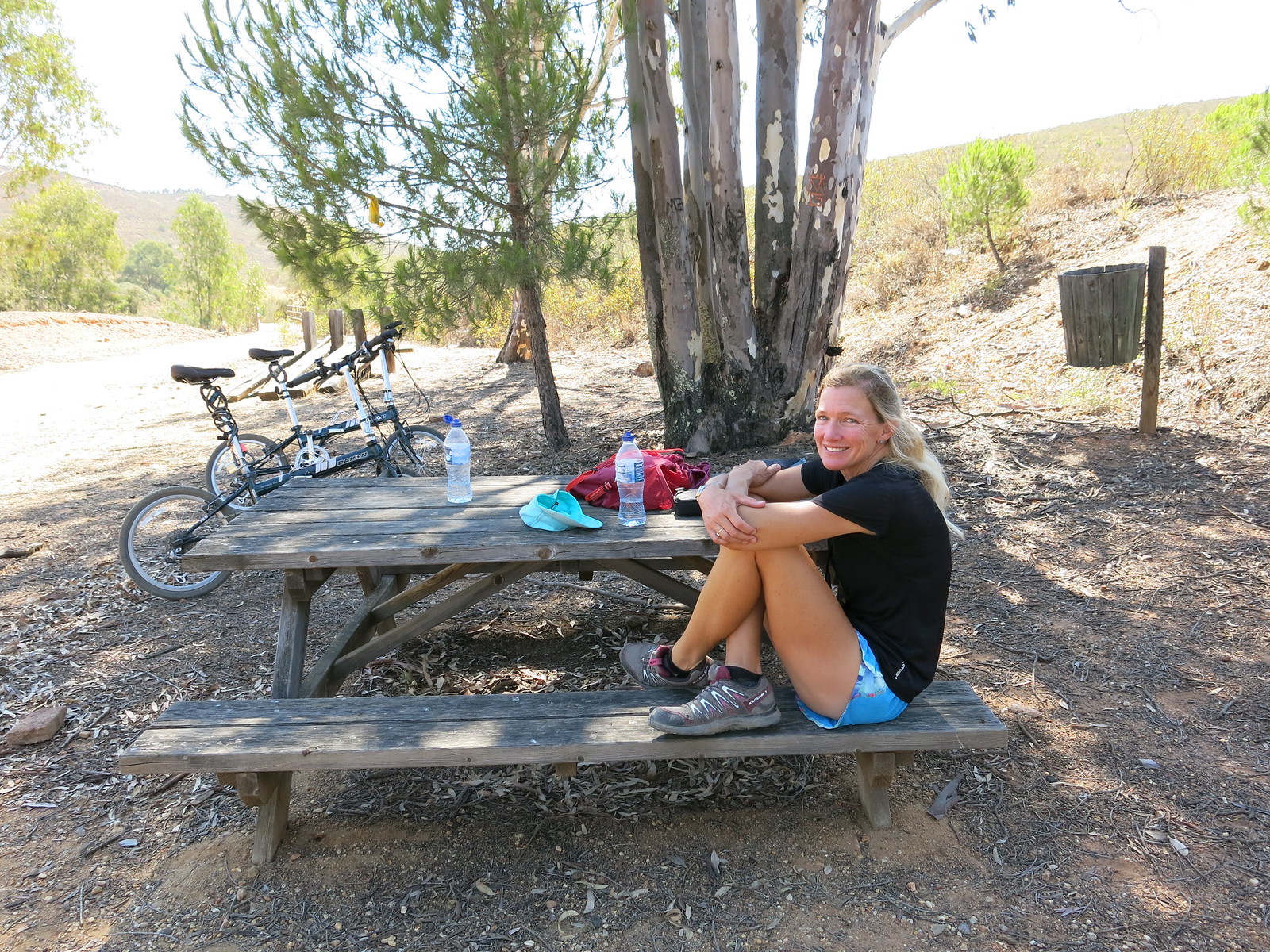 Since the guts of our BBQ rusted out we have been really missing it this season but Portuguese tradition is to have a Sunday BBQ so we finally got some. We visited one of the old castles that looks down on the anchorage, a museum, an old windmill, that sort of thing. On the last day of biking, we got an update that the sail had shipped from China and was expected in Spain the next day, to be delivered the following day. They had warned us that we absolutely had to be able to get a phone call from customs to accept the duty charges and if we missed that call, customs was likely to return the sail at our expense. So we turned our bikes around and got back aboard to head down the river and pull into a marina to be ready. After we got there, we got a note from the broker that the sail had really just moved from the loft to the shipper and it would be a few days yet before it would go out. Oh great! Why the tracking info saying it had gone? Since we were now in the marina, paying high season rates, we decided to use the wait time to take the train to Lisbon, Portugal's capitol since we knew we wouldn't feel like sailing up there. 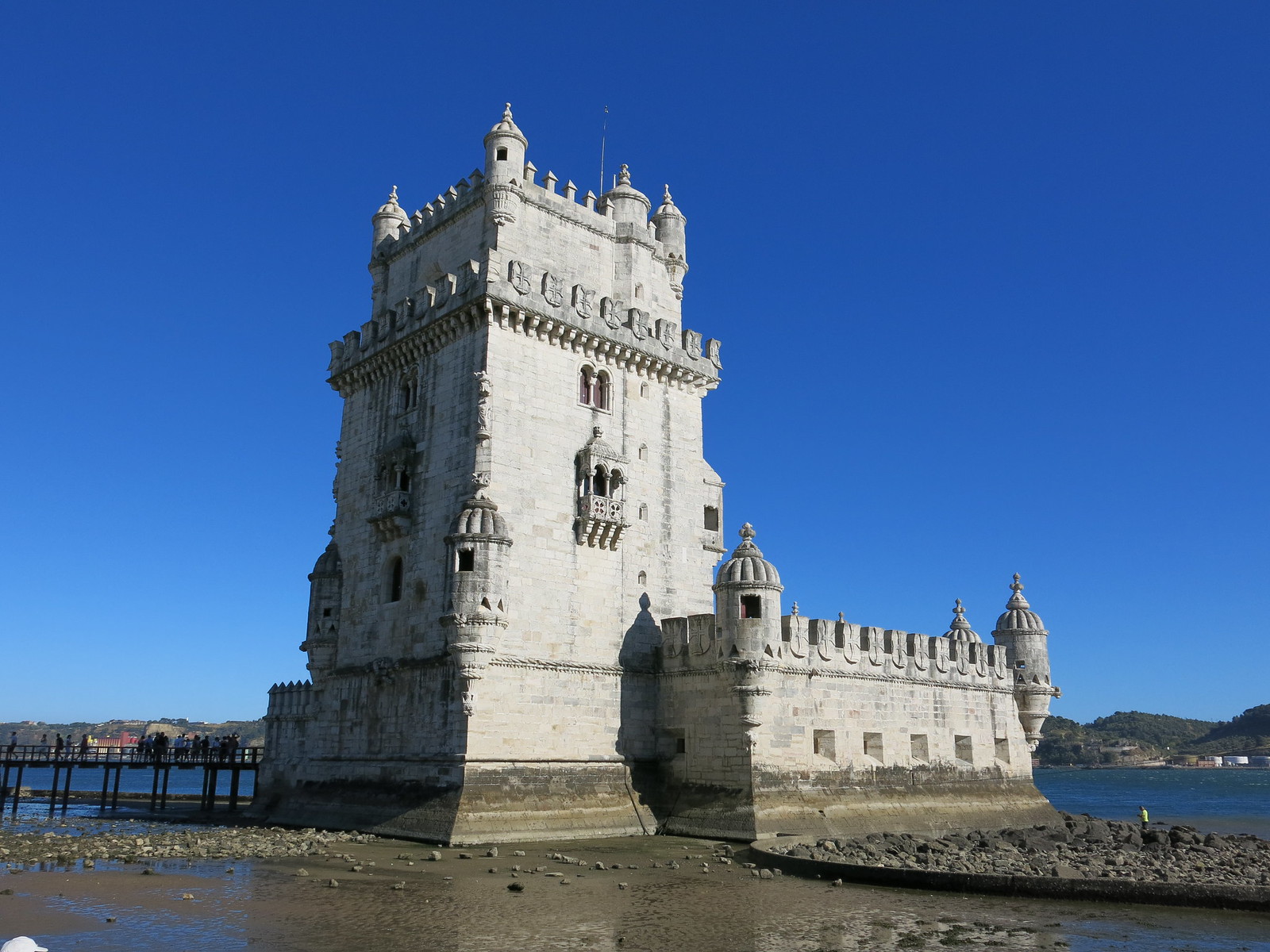 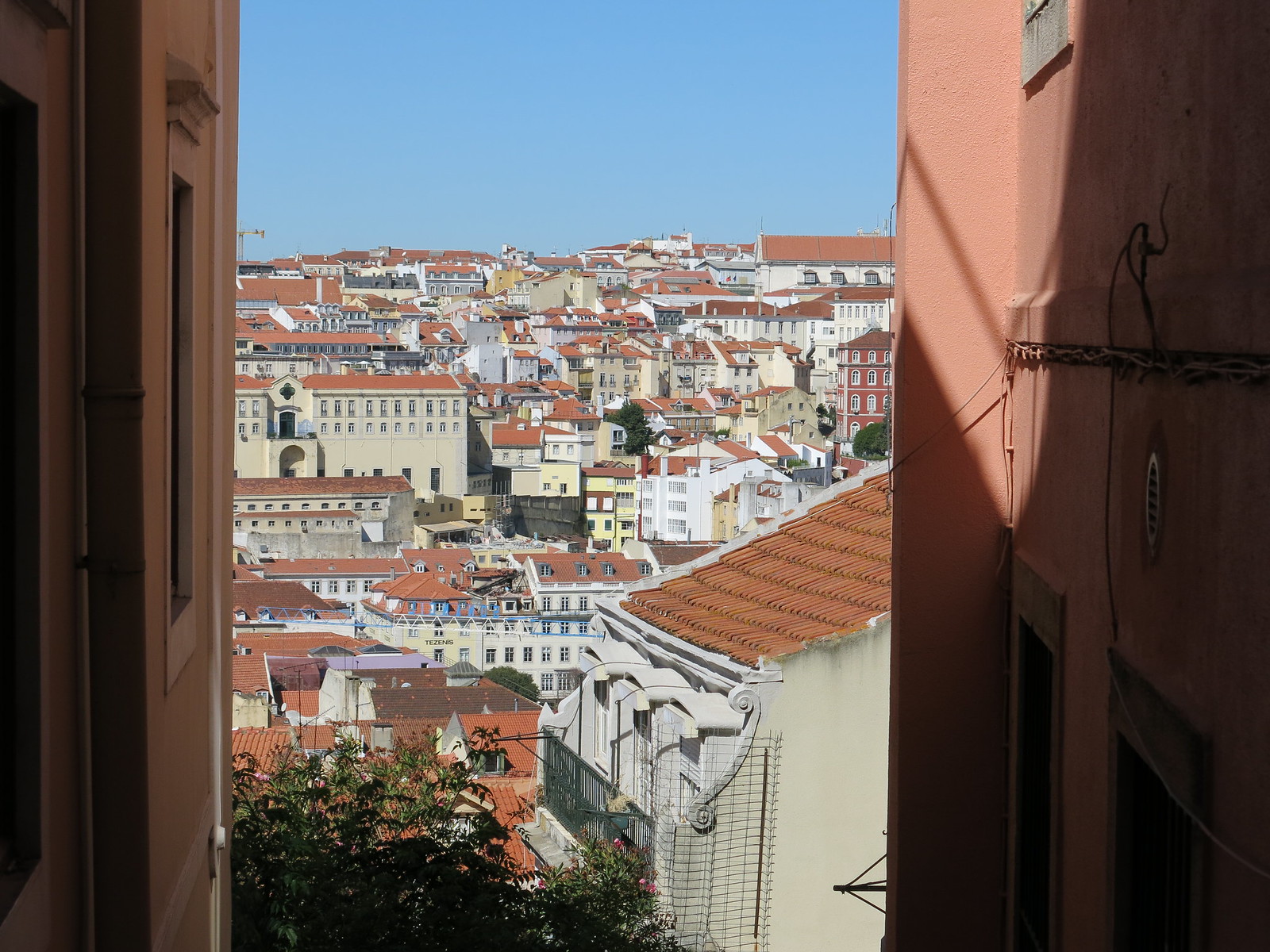 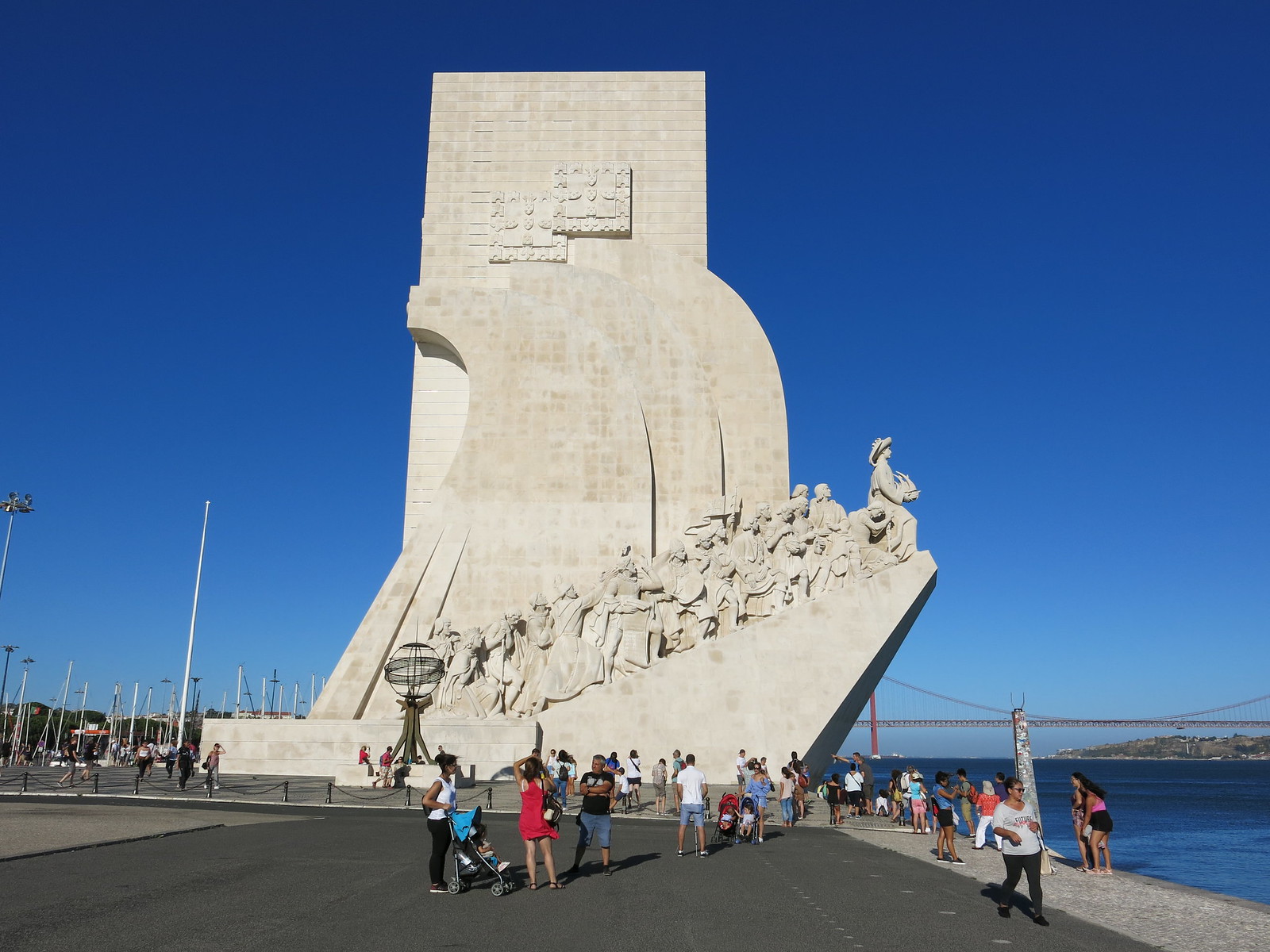 The train worked out to be about 5 hours to get to Lisbon on two different trains and we could walk to our place. It was nothing fancy but it had a nice big window with table and chairs so you could look out onto an old plaza. We'd no sooner gotten checked in and sat down for a minute to enjoy the view and we get a tracking message that the sail had shipped (again). Except this time it really did and the phone number on the outside of the box that customs would call would be our Spain number. We felt sure this would happen. Jon had to scramble to be sure we could get a roaming call in Portugal or else we'd have to go back the very next day but luckily, we could. This is unusual for roaming calls to work with prepaid chips, so we really did feel lucky. So we toured around the next few days seeing the sights of the old city. In 1775, Lisbon had a devastating earthquake that caused a huge fire and then a tidal wave and much of the city was destroyed. We actually had a tremor that first morning as we sat in bed having coffee. We read that some of the larger, more plain tiled buildings were born of this need to rebuild fast as Azulejo tile work was already famous to Portuguese architecture. Whole buildings covered in tile. We tried the local Vinho verde green wine which we really liked along with Ginja, a cherry liqueur served in a shot cup made of chocolate and strolled the streets looking at colorful pottery and clay fish. We got the customs call while sitting in a botanical garden watching baby peacocks. We were going to have to pay VAT tax after all- dam! 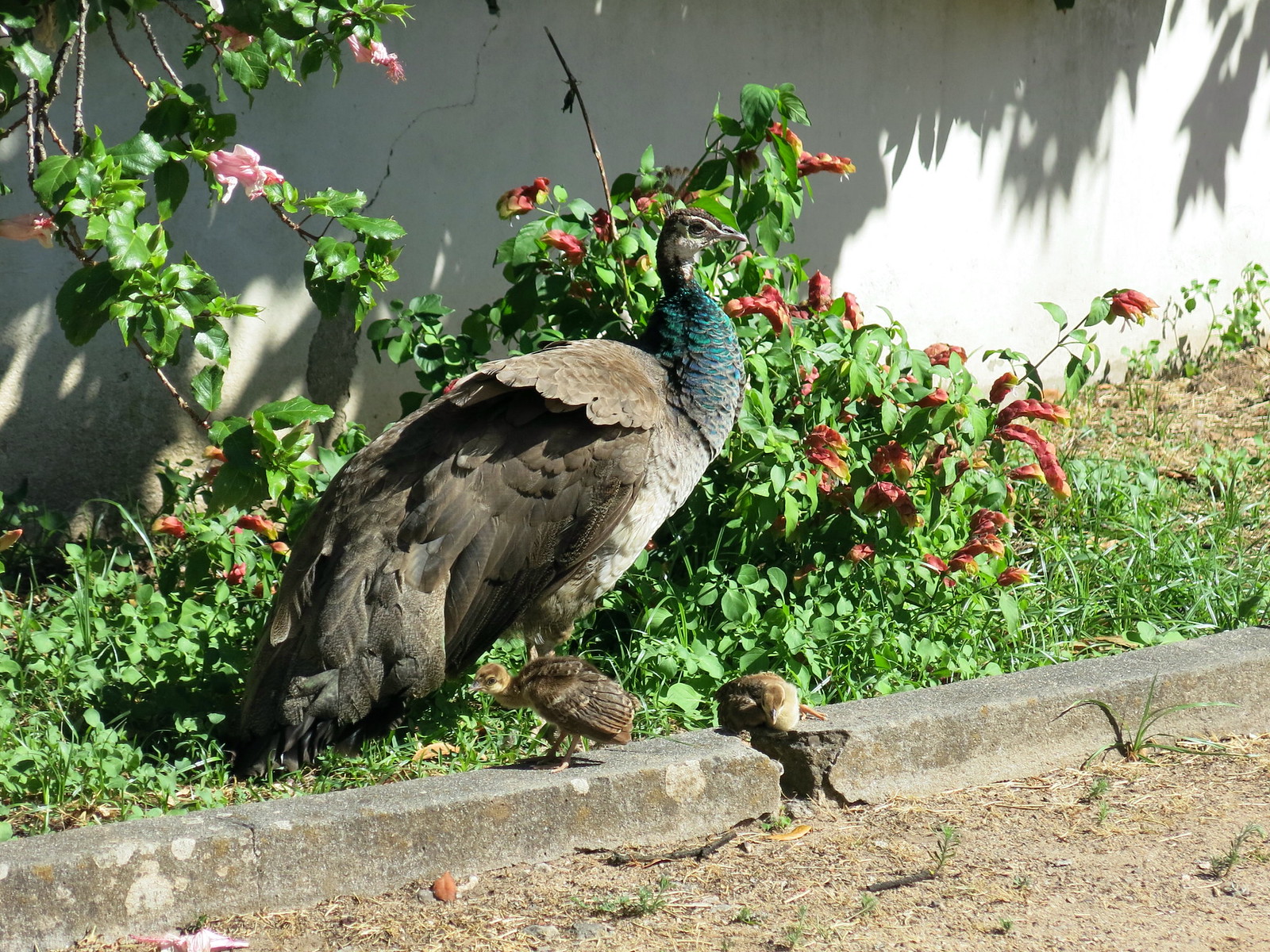 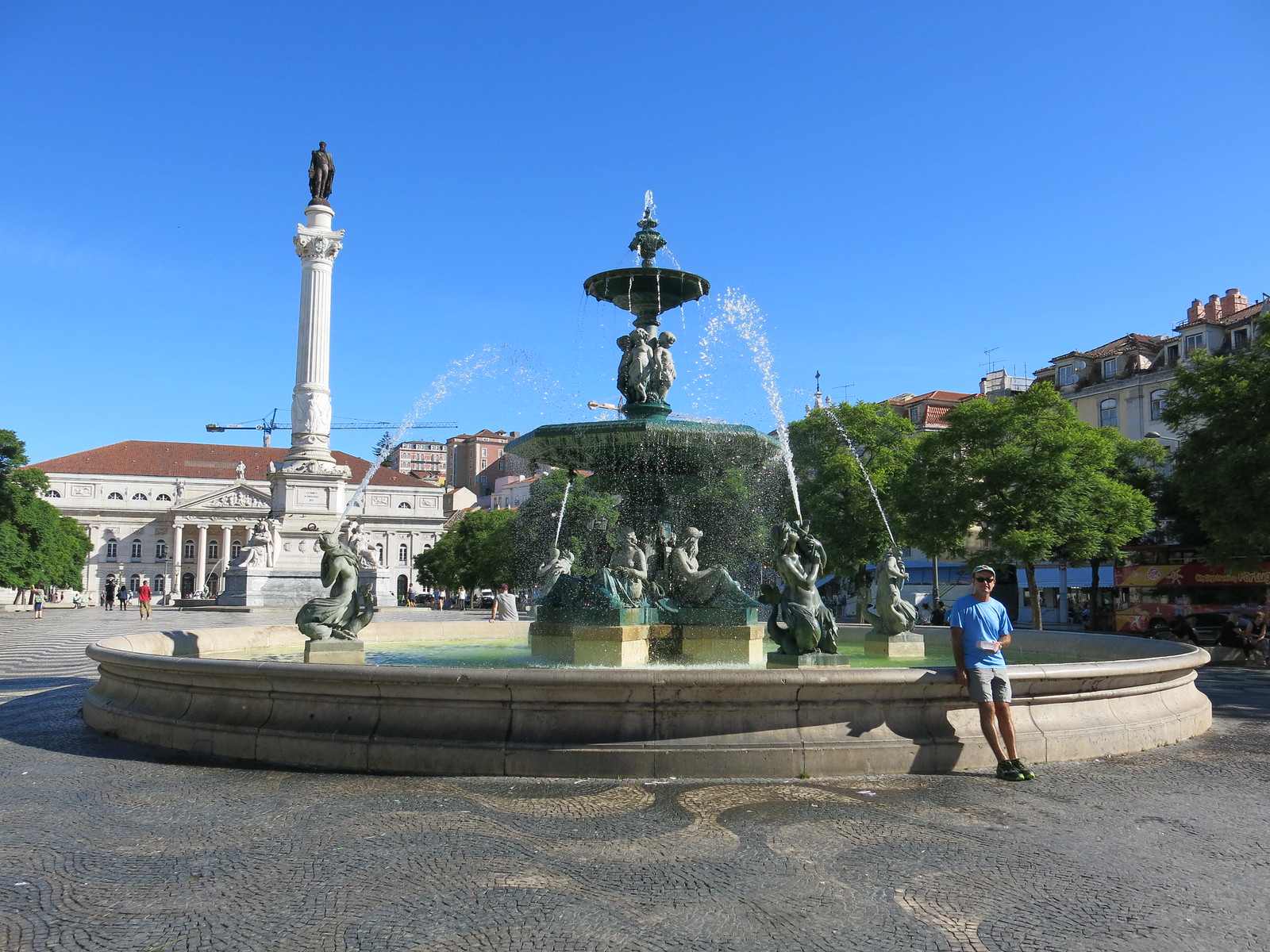 A local told us we had to take the train a little north to visit the fairy tale town Sintra, so we took a day to do this and were pleasantly surprised at how green and lush it was not to mention cool for a change! Sintra became a popular place for Portugal's elite nobility and it is known for its 19th century Romantic architecture. Another world heritage site, it is full of whimsical castles and actually really pretty scenery. We toured one mobbed castle (tourism is booming in Lisbon area) and endured a lunch on a bench with 3 strollers circling us before heading out onto the streets to get some space. 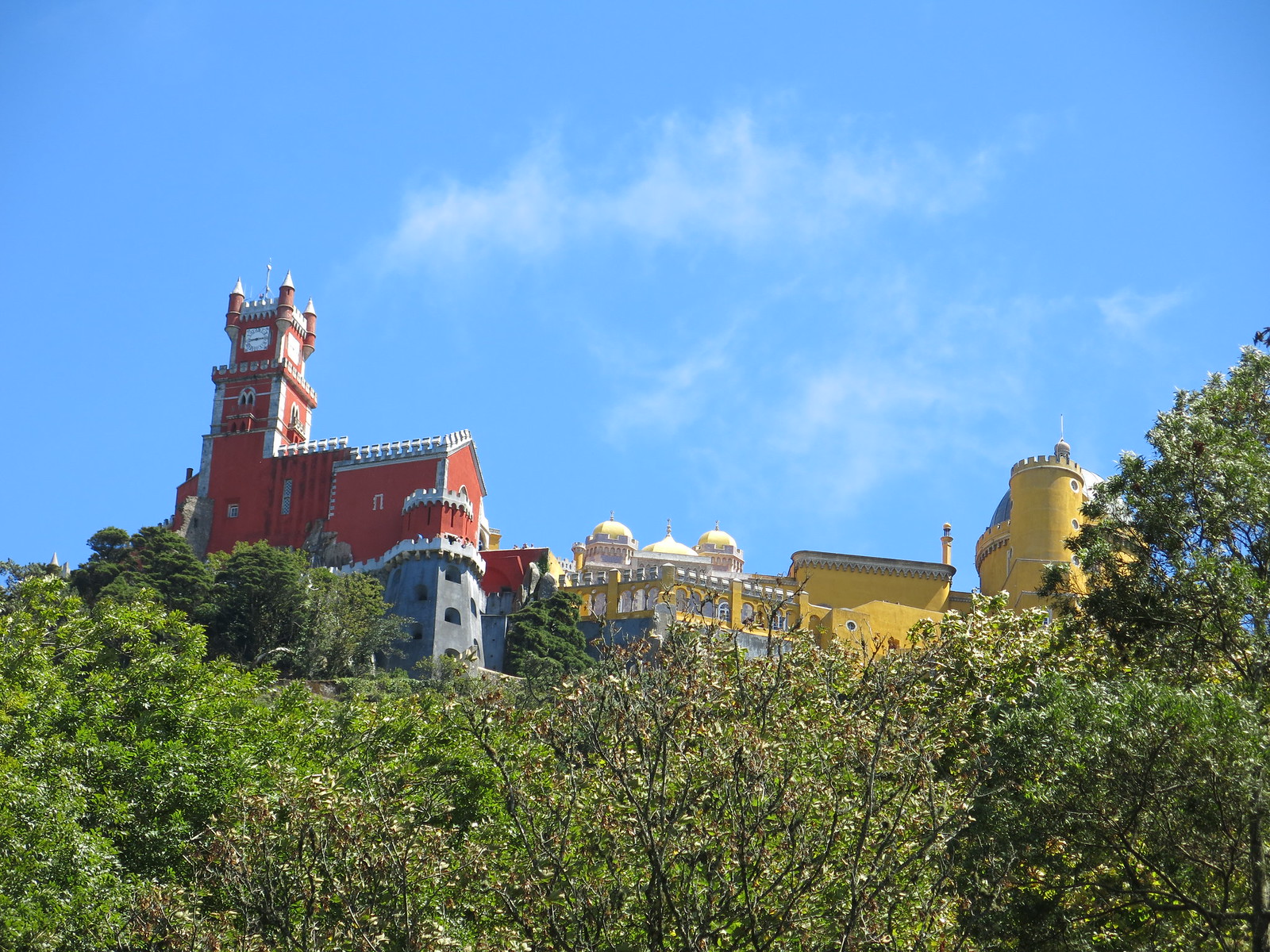 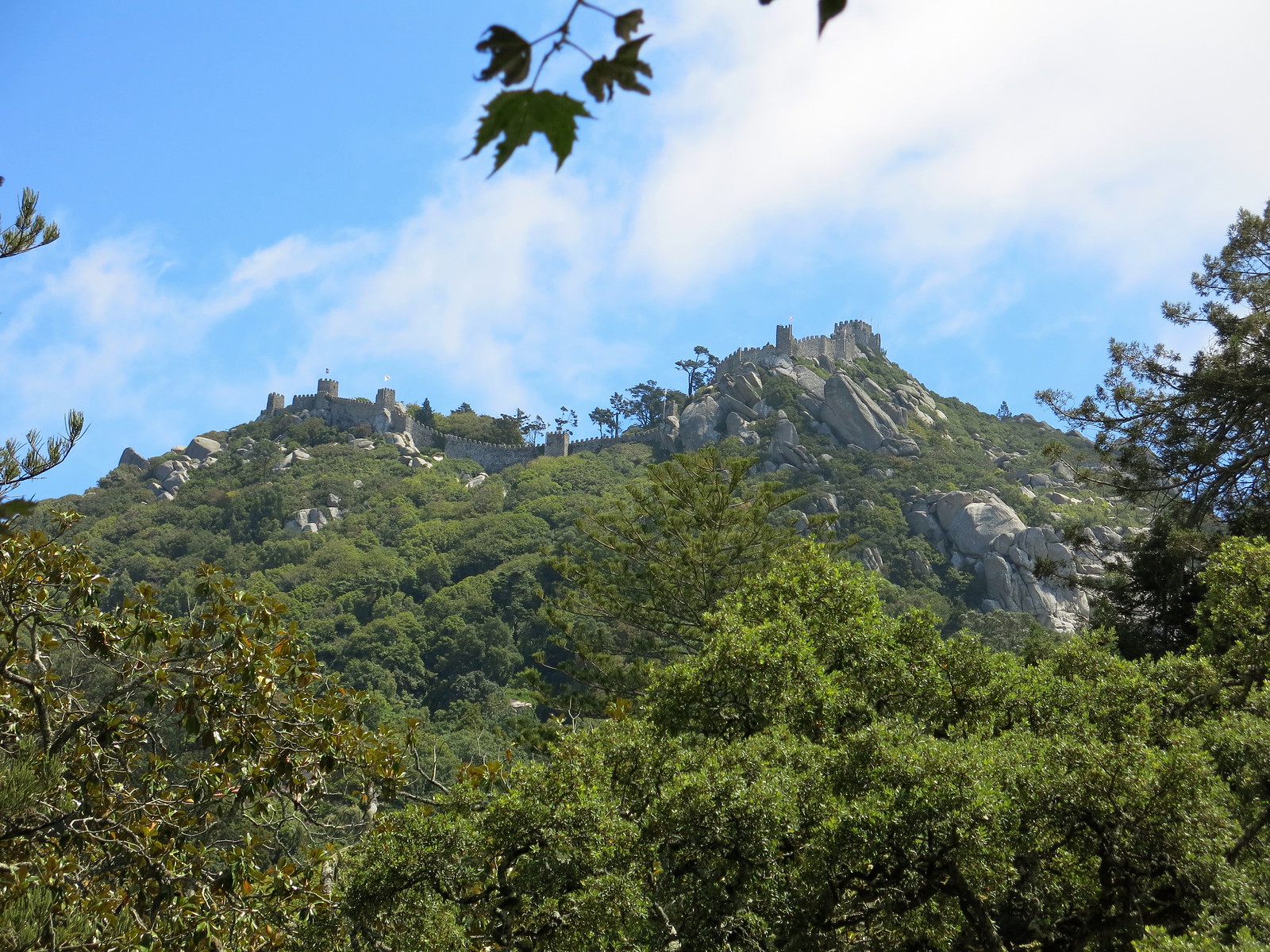 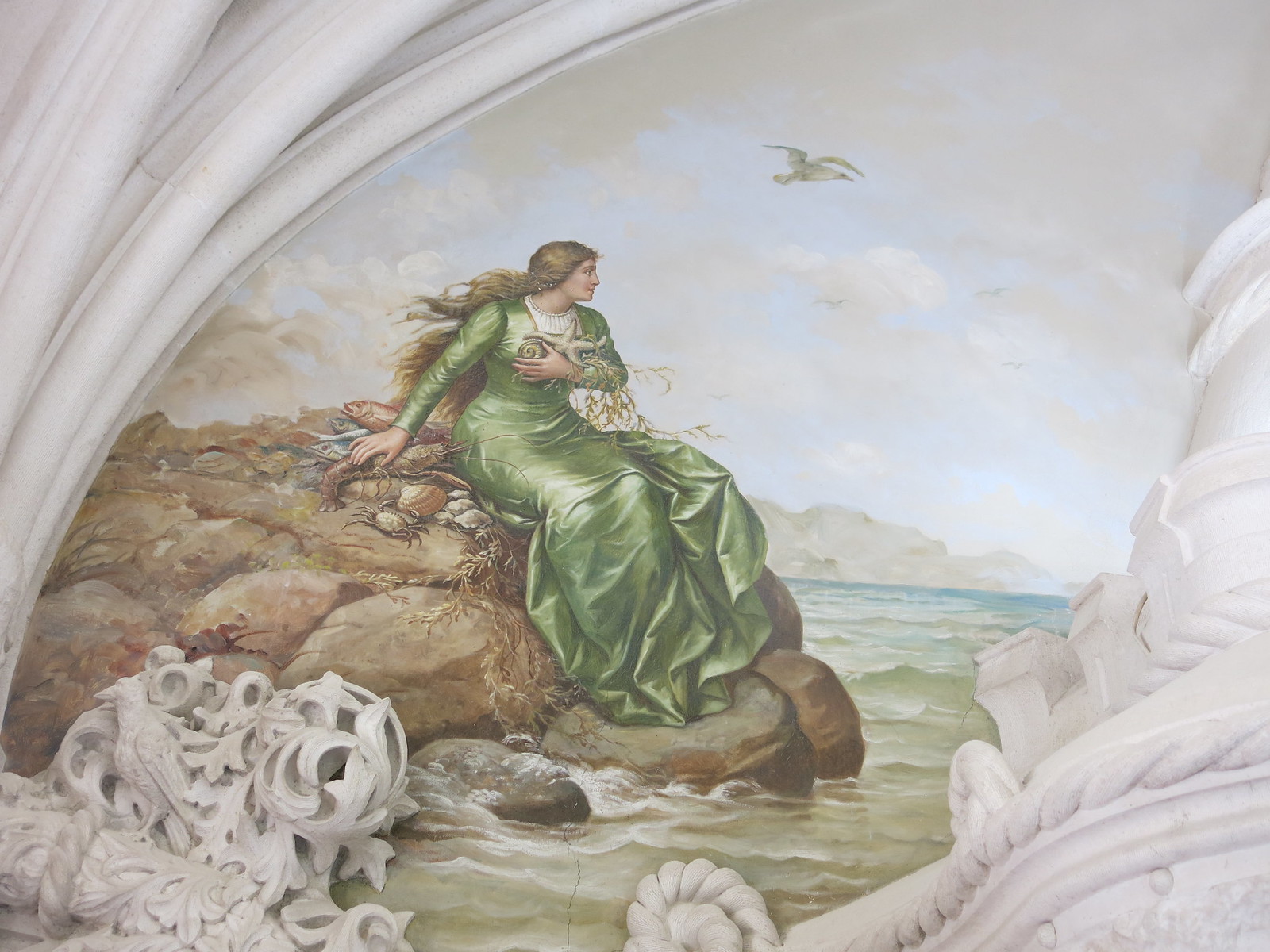 I loved this painting from a wall in the castle we visited. Not sure who did it.

We enjoyed Lisbon but it is too bad there is so much graffiti. It seems like it is almost revered and we found the city to be a little rough around the edges, but still nice. I went to take a picture of one of the many beautiful fountains in a square only to find more graffiti marring it. You could see that there was a difference of opinion on tourism in general. Some of the graffiti read: Mass Tourism = Human Pollution. Understandable, although no one forced Lisbon to be a cruise ship port...

The train ride back was a real doozie. The AC in our car broke and every seat was full so there was no switching your assigned seat. The cars are meant to be air conditioned so there are basically no windows, just a few slits up high. You could see people starting to sort of panic and all the Portuguese ladies were using their hand fans flapping away at their chests. Jon was looking at me with that "I love public transport" look before he started panicking too. It was no longer funny. The conductor came in and opened up the slit windows before moving on to a cooler car and we were all left to bake for the 4 hour ride. The bathrooms on the whole train had no water at all so they were disgusting. It was a miserable ride back and we were not impressed! We are DONE with trains for now! And we aren't moving to Portugal either!

When we got back to the boat, the arrival of the sail was delayed for 2 more days because of the weekend and then Monday slowness so we busied ourselves with waxing the hull, re-sewing all the stitching on the ailing dodger and similar projects. Then on Tuesday, the day DHL came to deliver the package, he just dropped off a bill in the marina office rather than call us or have the marina call us and we had no idea what time it would arrive from the tracking info. So we couldn't get him to come back till 5pm- another day lost. We finally get the box, pay $500 in customs fees, get it back to the boat and open it up to find that there are grommets all up the sail where our sail track hardware is supposed to go, the battens don't fit in the pockets and the headboard is too small with only one hole for the two cars that need to attach to it! Which goes to show you, you cannot win! No amount of communication, Jon's detailed order write-up, bold red capitalized letters & pictures indicating important points for the sail details makes a hill of beans difference if you can't get someone's focus. Otherwise the sail looks nice and is much lighter. Hopefully we will get to use it! The sail broker has been really nice, admits it is their mistake and will "move heaven and earth to make it right" which is reassuring although it doesn't make it easy to have to find a local sailmaker in the month of August when everyone is on vacation anyway, in Portugal, with high season marina rates to fix your brand new sail. Uhh! 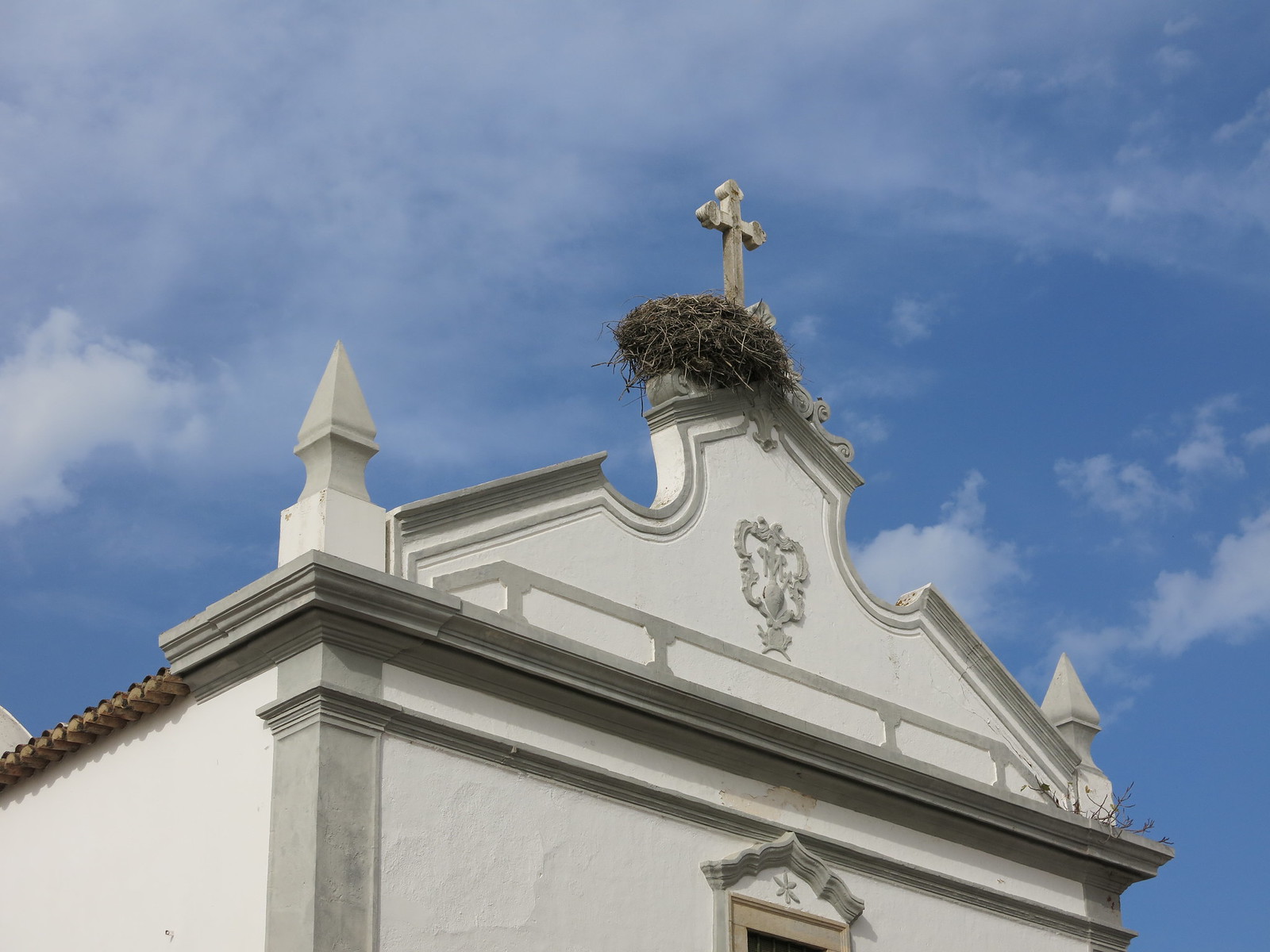 We moved out of the marina and on up the Algarve coast to explore some of Portugal to clear our heads and we have visited a couple of spots so far. It is nice but not knocking our socks off. There is 9 feet of tide and all of the river inlets have swift moving currents and shallows which we haven't had to deal with in a long time. The beaches are wide and beautiful and there are some cute historic fishing towns that have been interesting to explore. This area of the coast is known for its storks. They build huge nests everywhere. On phone poles, churches, towers, wherever they can make it work. They used to migrate to Africa but now with global warming they don't bother. Today we biked a part of the Eco Via bike path which runs the whole length of the Argarve. We passed a lot of salt pans filled with birds, seaside towns, farm fields and pomegranate trees. Ever wonder what is in your sea salt? Well, plenty of bird doo for one! We had fun making up the wording for Gourmet Portuguese Algarve Sea Salt "Kissed by the sun with essential minerals provided by bird poop". 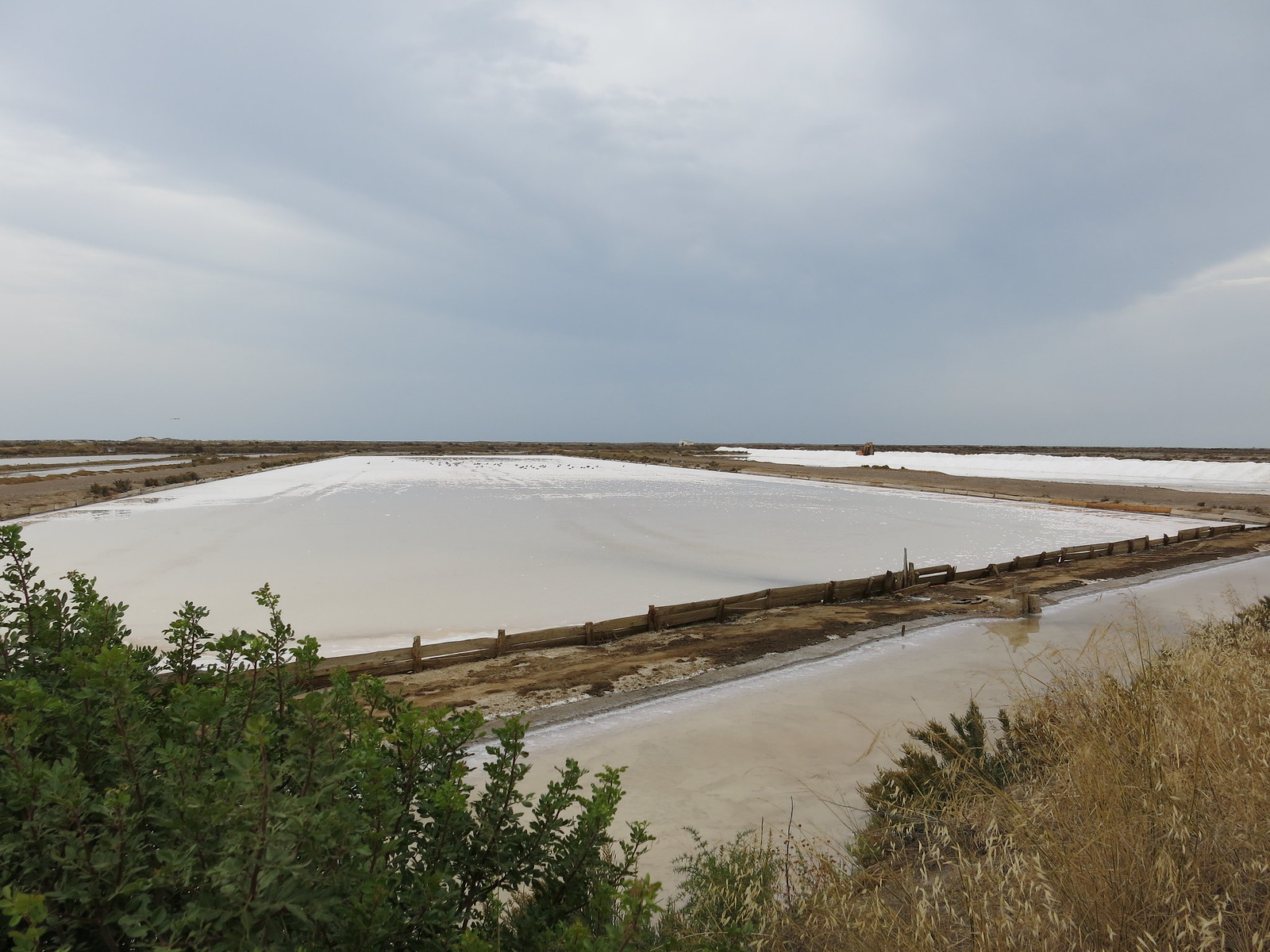 Our plan is to continue along this coast for a few more stops until we get to the edge of the Algarve and then turn around. In there we will figure out the new sail repair. While we had thought we might replace the jib too since it is old, we might not have it in us to endure another order. Maybe a blow out at sea is easier! We'll pack along plenty of ginja liqueur and chocolate and go slow.... 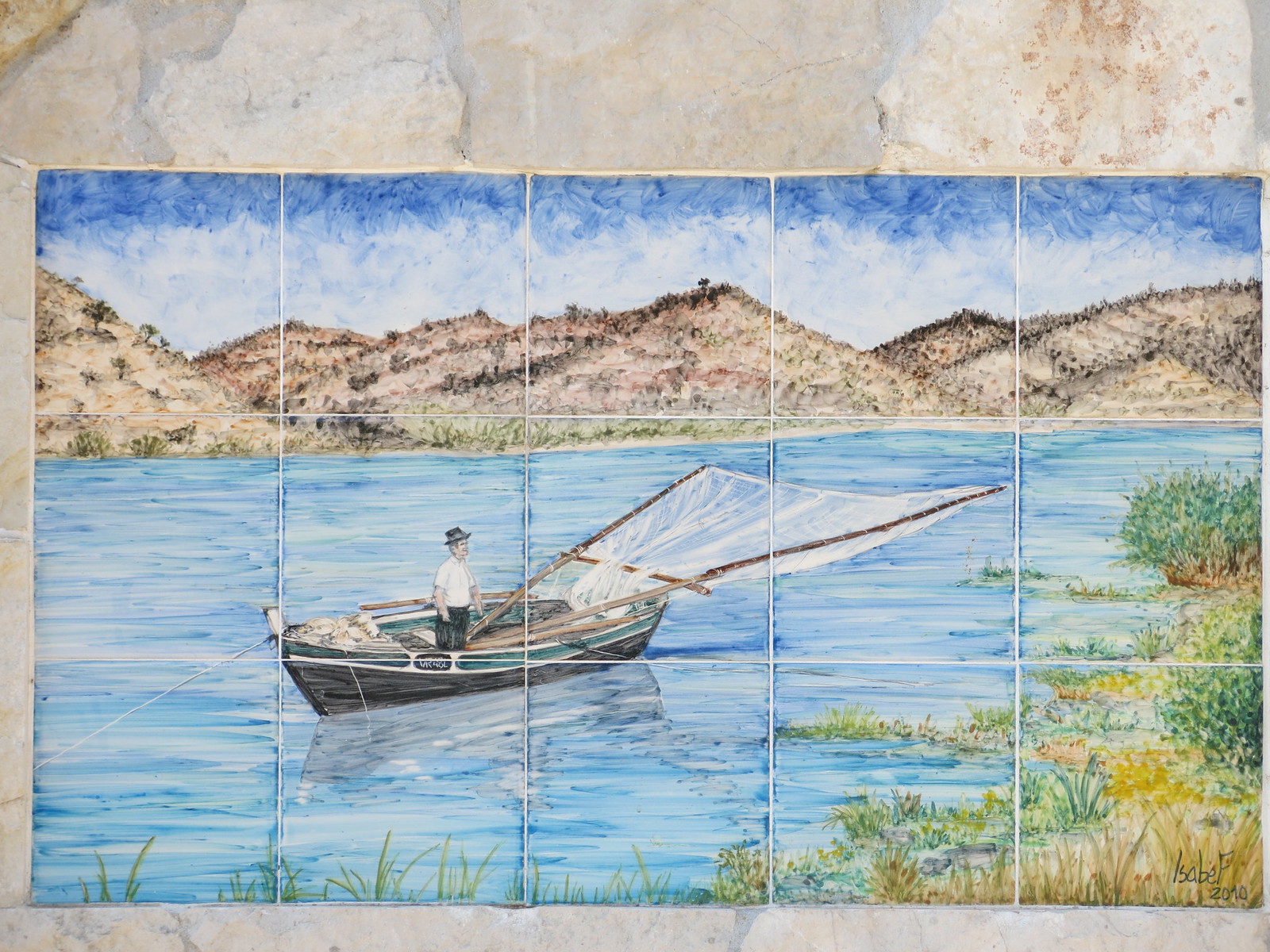