It was about all I could do to concentrate on anything other than windspeed and storm surge for all those being affected by ol' Irma and I'm sad at all the loss and work ahead to make things whole again. So this entry is more for me to think about something else and also to record where we've been than anything else. I wish the word hurricane only described the cocktail!

We've been exploring the Algarve coast of Portugal while dealing with the issues of our new sail that wasn't right. We did find a sailmaker who would work on it after some concern since there are hardly any sailmakers on this coast and this one said no at first since he didn't want to get involved . Thankfully he listened to our situation and helped us out. Thanks Dune Sails! We got it back a couple of days ago. Far East Sails is covering the cost for changes which is reassuring. But we have just sailed 2 long days with it and the fittings for our mast track that go on the sail weren't re-installed properly so Jon already had to repair one today because it came apart. It seems never ending. They did try. Right now we are working our way back to Gibraltar quickly as we'd like to do final checks and provision there and then head on to Atlantic Morocco. We pulled in to Cadiz late last night, so easy because we'd been in here before and knew the way. We both really like this city. The marina has lots of open slips so you can just glide right in. We biked much of the day today which was good to shake out some of the rigor mortis from 2 days underway. We both keep asking each other how we are going to manage a long passage since we stiffen up after a few hours of sitting. Now tomorrow we're off for the last 75 miles to Gibraltar. 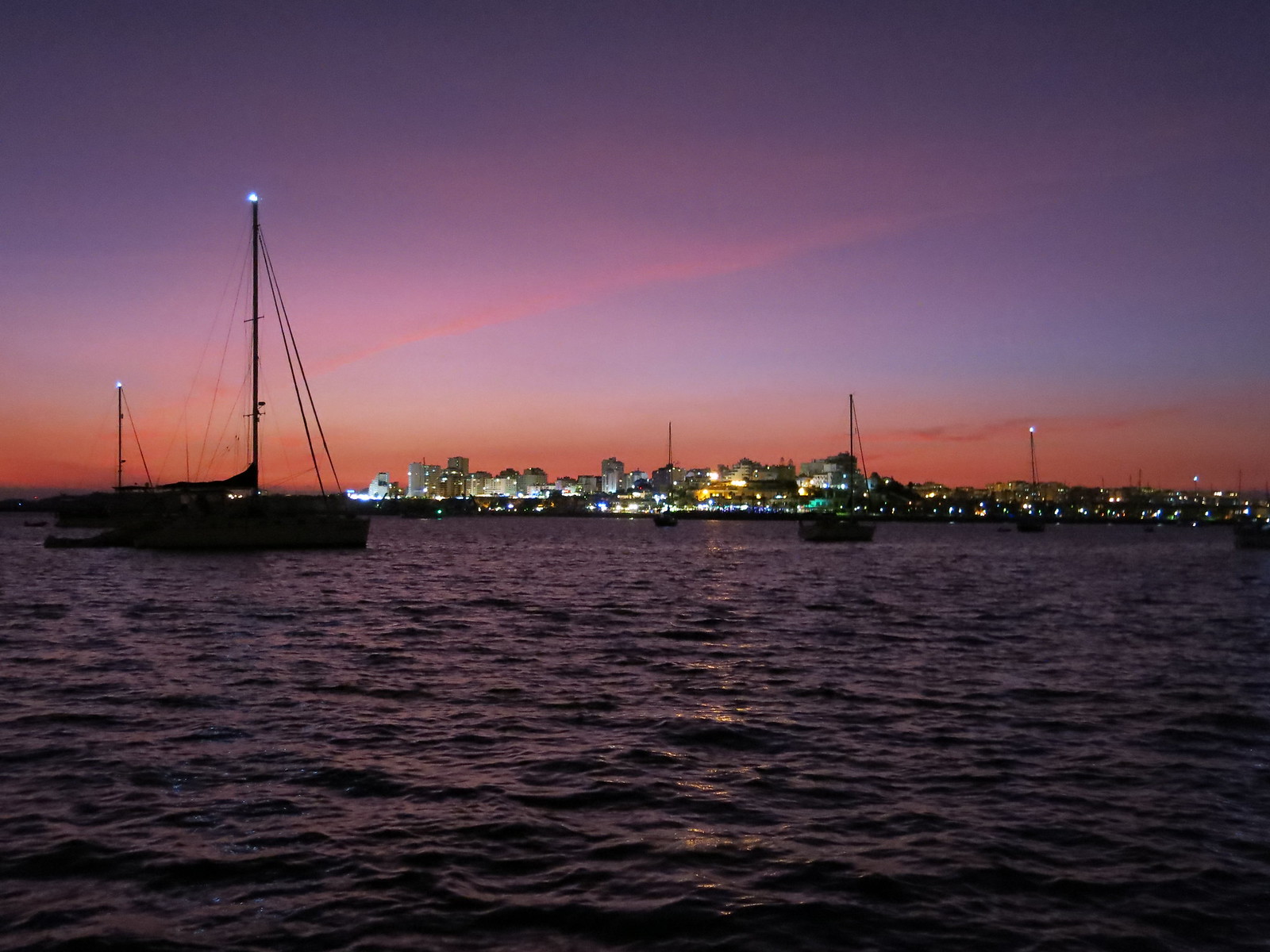 When we pulled in to Portimao Marina to meet with the sailmaker, I went into the marina office to sign in while Jon was getting fuel. They said I had to present to immigration and the lady walked me over to the desk. The friendly officer took the passports and right away started flicking the pages. We know page flicking is bad. Then more flicking and out comes the paper and pen to start recording dates. Oh here we go! I had the tears ready at the floodgates as I was already stressed out about the sail. He walks back to me and starts with a few questions, like when are we leaving, can't find the stamp, I show it to him and he says it isn't the right "kind" of stamp... I thought a stamp was a stamp but no. Jon comes in and joins me. The officer says we'd overstayed the total days of 90 out of 180 in Europe and I said yes, our boat is our home, what are we supposed to do, we are trying to sail home this Fall. He says he understands. Then he said, look I can pretend I didn't see these stamps and give you the extra time but I need to ask you one question, did you vote for Trump? We said no, we didn't. And then he said, good, now we can move forward. We chatted a bit, then were given a new "correct" stamp and were on our way. Phew! We are not asking to get these questions, they are just coming at us. 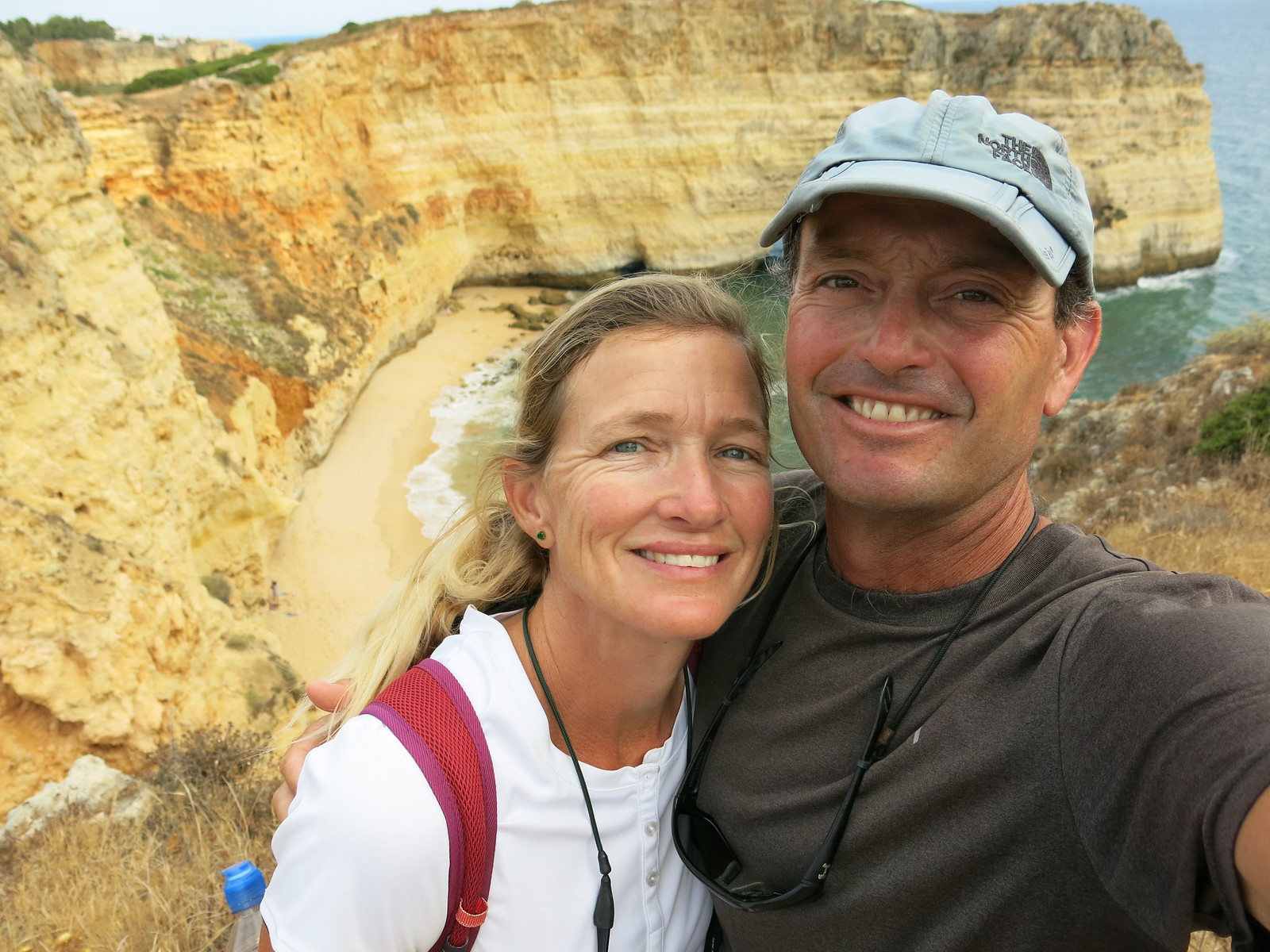 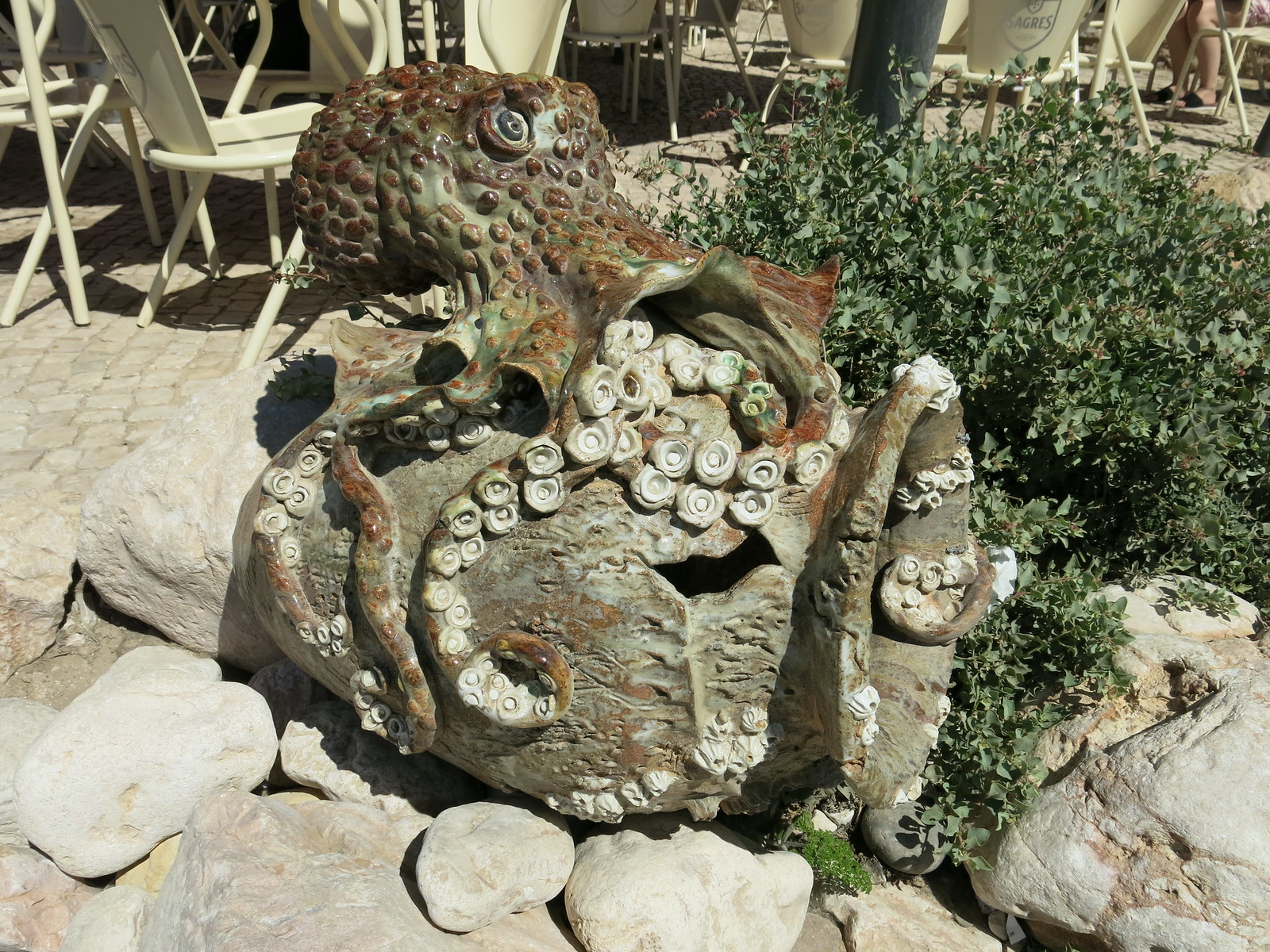 During the waiting time we visited a few anchorages, all of which were on the coast full of sun & surf and interesting rock formations. Even though we were dying for trees and a mountain or two, this is not what this coast is about. We walked beaches, meandered beside pretty rock arches and looked out over steep cliffs. We increased our seafood intake because Portugal is all about fish & shellfish. Everyone is fishing or clamming and the water boils with fish like we've never seen before. We are too squeamish to eat octopus but it is interesting how they fish for them- lower a clay pot into the water on a float, the octopus swims in to make a den and then stays there when they pick it up so not too hard to get them. Old pots become yard decorations like conch shells on a Bahama island. This pic is a sculpture showing evidence of the method. The water isn't as cold as we'd thought it would be but when we get in we don't see much of anything at all. And it isn't that clear so swimming has not been a draw other than to cool off. We need to clean the hull but I get creeped out in cloudy water at what I don't know. We'll do it in Gib. We did get our poles out from being put away since Indonesia, or was it before? We never had the heart to fish in the Med and were pretty sure we wouldn't get anything anyway. 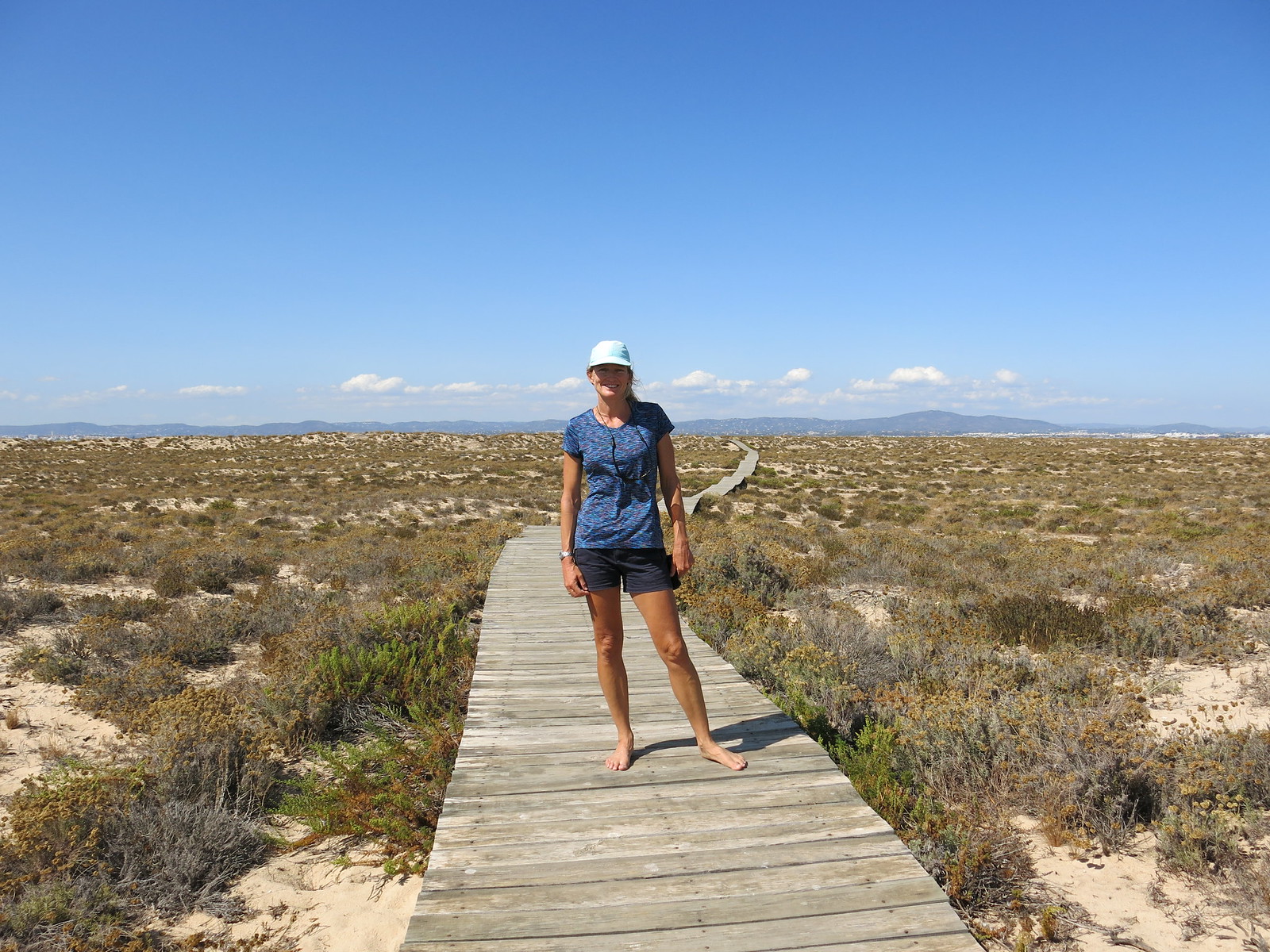 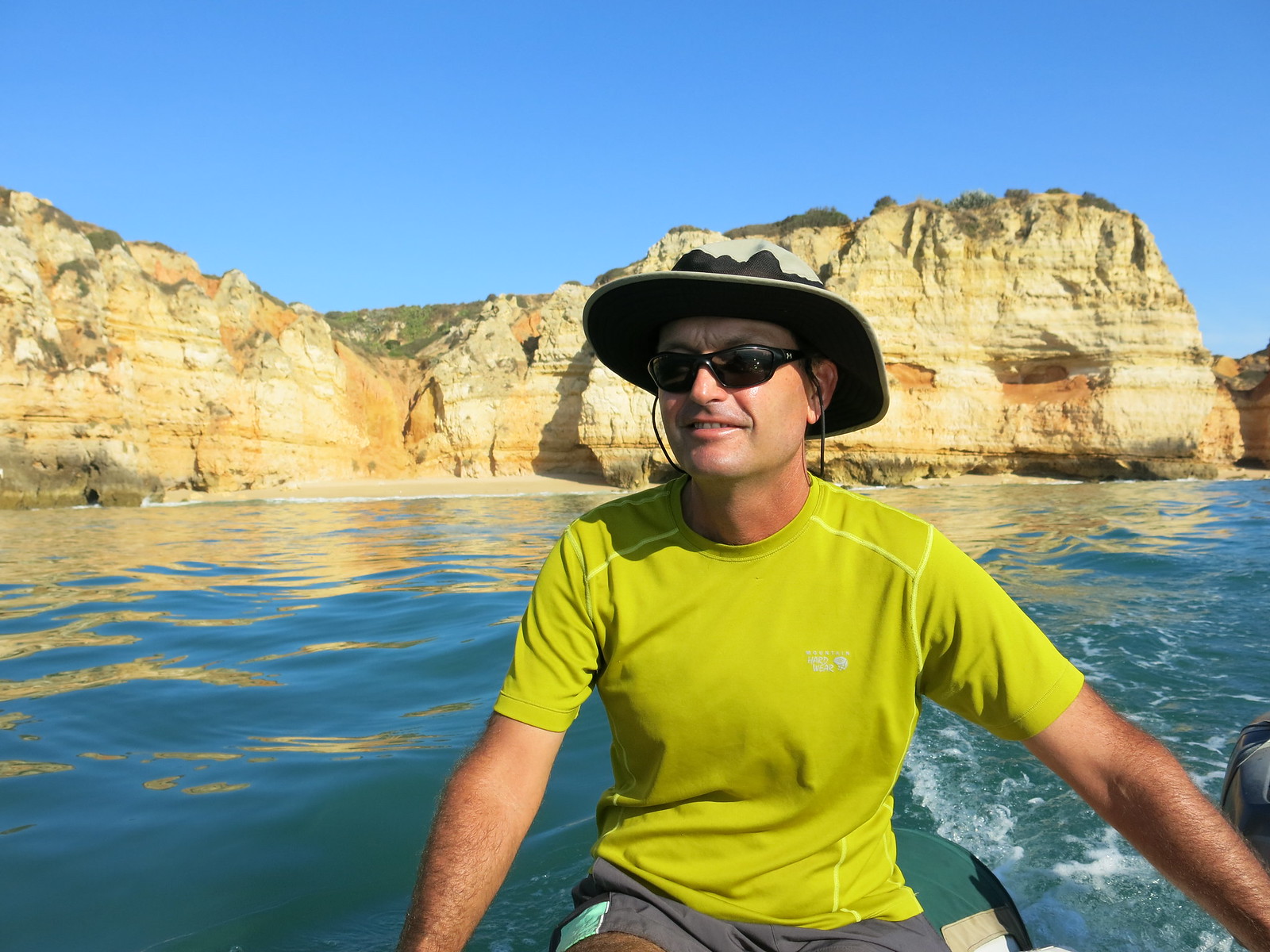 We had our fill of the train to Lisbon so tried the bus to the SW tip Cabo de Sao Vicente where the coast starts running straight northward and the Algarve ends. Since the swell was up and there aren't great anchorages, we decided to leave the boat safe (always worry about the boat) and take the bus. Good grief! Portugal's public transit isn't what you'd call zippy! In this case we could have sailed there in the same time it took the bus- 3 hours each way. Its not that far. There were high cliffs and we got some delicious fish soup, a trademark for this area, and we stayed in motion for all the time we had till re-boarding the bus again; what a long day that was. Done with the bus! 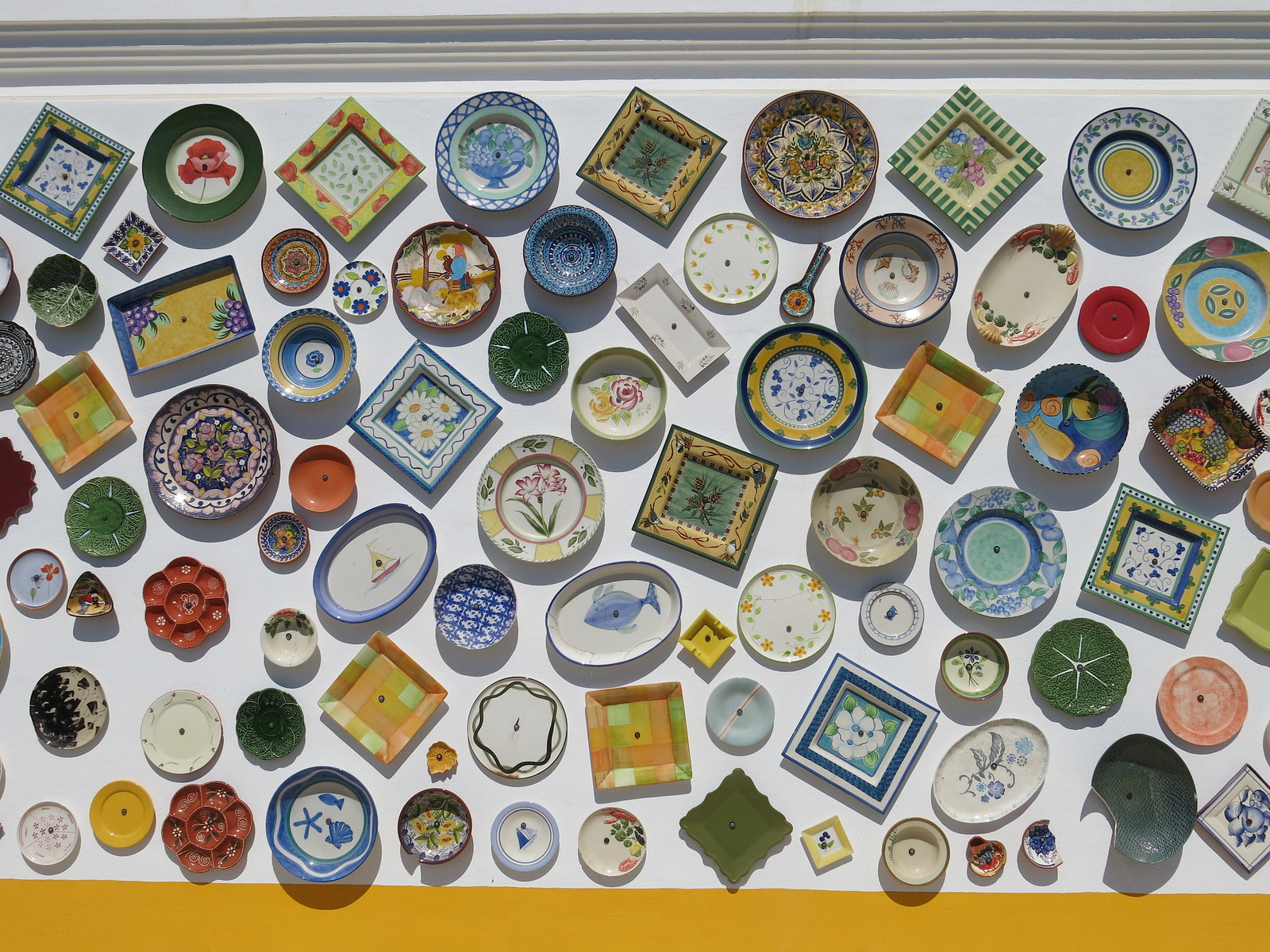 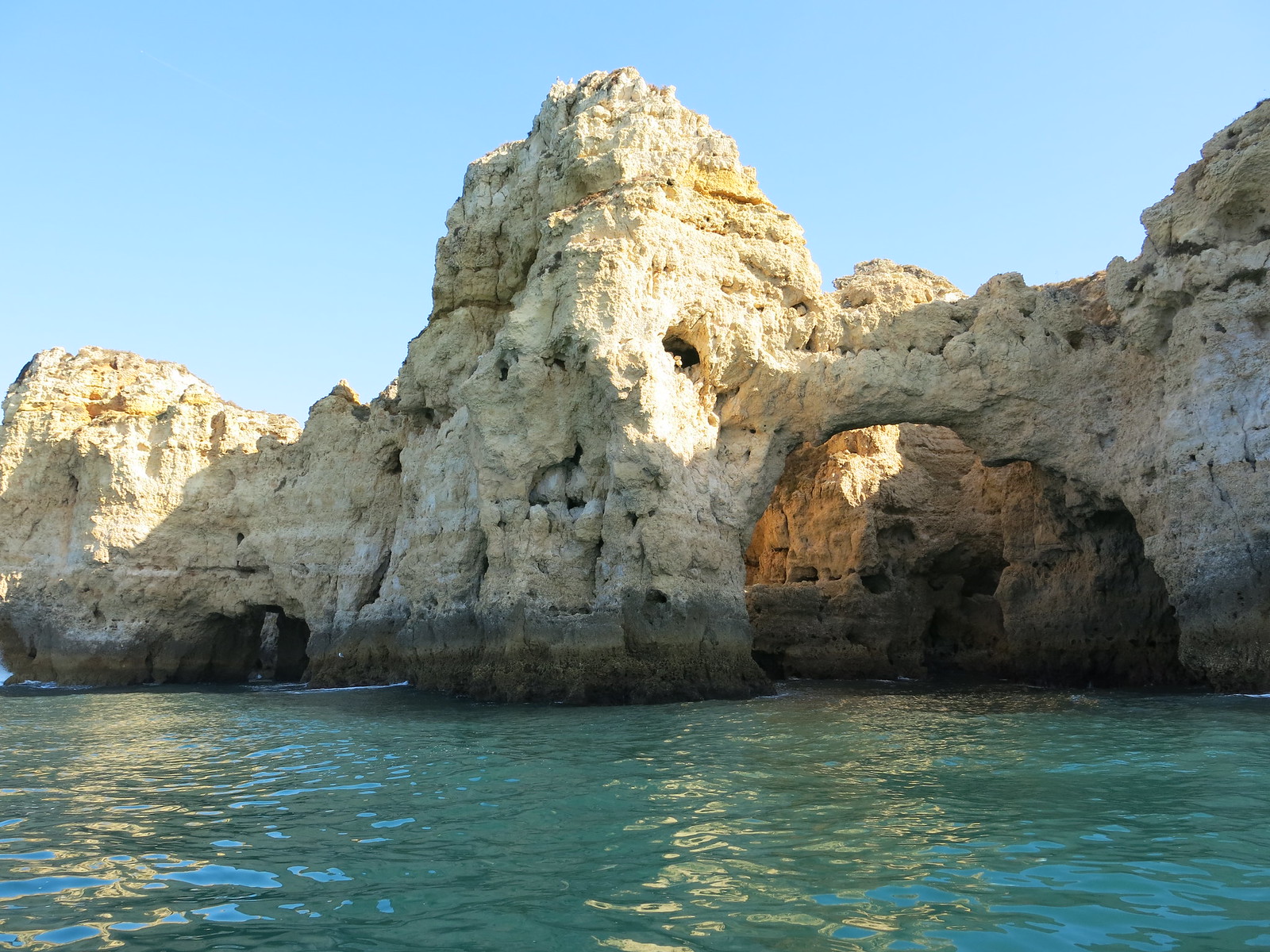 Then one day we were in this current ridden anchorage that was really nice as long as there wasn't much wind but that night it picked up and the boat that we were anchored next to started sailing all over on his anchor because he was on rope rode. It was like he was underway but with no one at the wheel. At 11pm in 30 kts, we had to pick up and move because we were nearly pushing him off of us and we couldn't raise anyone on the boat to come out and see what was happening even though the companionway was wide open. It took 3 tries to get ourselves re-situated again outside the other boats but with enough room to swing without hitting the breakwaters as it is a tight anchorage for depths. Then we set the anchor drag alarm and got into bed with the wind howling and the chain clunking as we sat sideways to the current. We are lying there resting when we hear a knock on the hull and "you gotta get up, you're drifting out to sea!" We come tearing out to see that we were just as we'd left ourselves a few minutes before but this nice man hadn't seen us move and so was alarmed that we were now in a different spot. When he found out, he said "you've got to get back to sleep!" Sleep? Who can sleep? The next day the wind had abated and we were getting ready to leave for someplace nicer and we see the owner of the rope rode boat get dropped off on his boat from shore- he wasn't even there! What an odd night that was.

Portugal is known for its pottery and they had lots for sale all over and even nailed to the walls of the stores to draw you in. Best used in homes that don't heel 45 degrees though.

There were nice boardwalks crossing the dunes to get to the oceanside beaches. 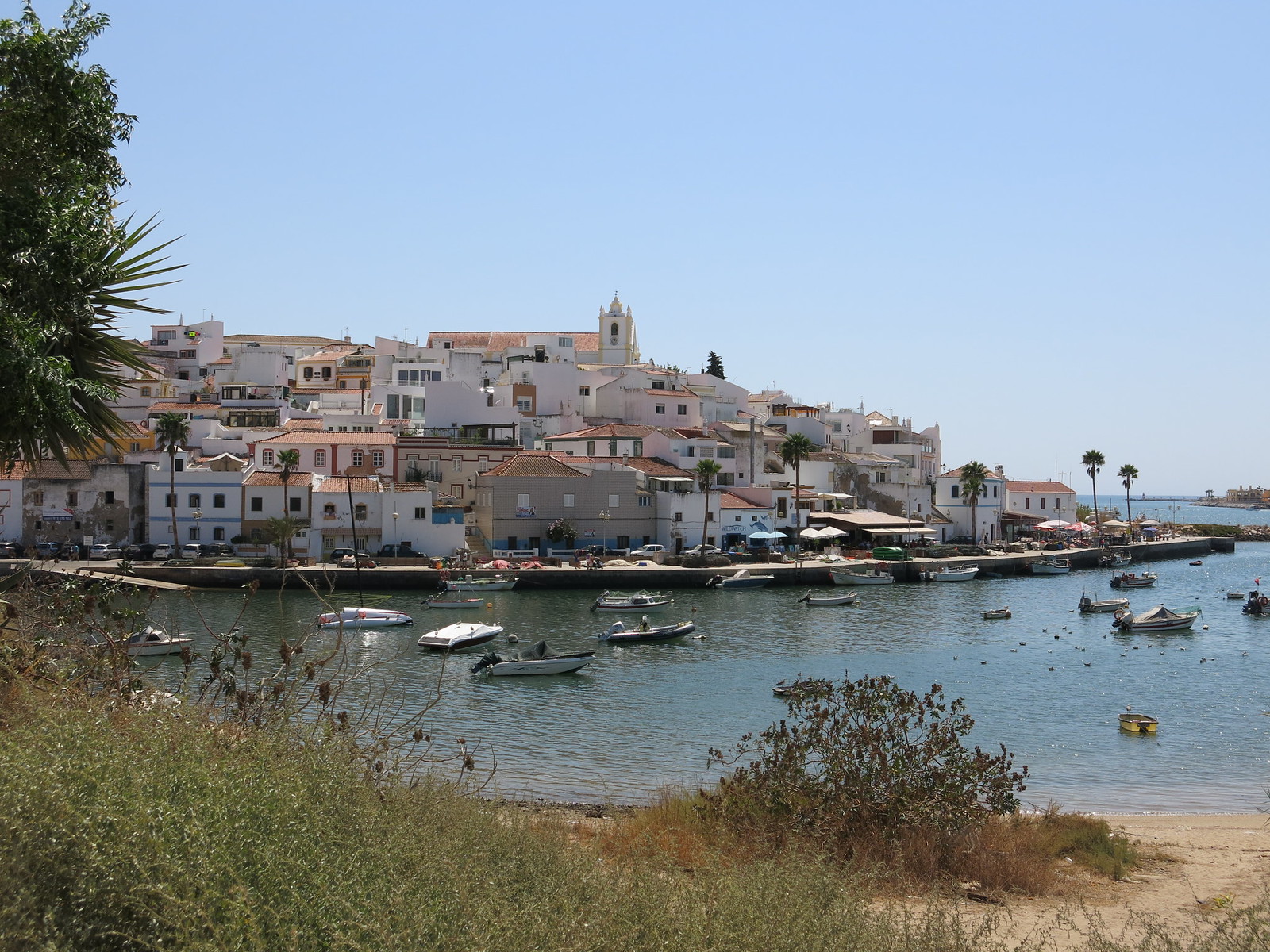 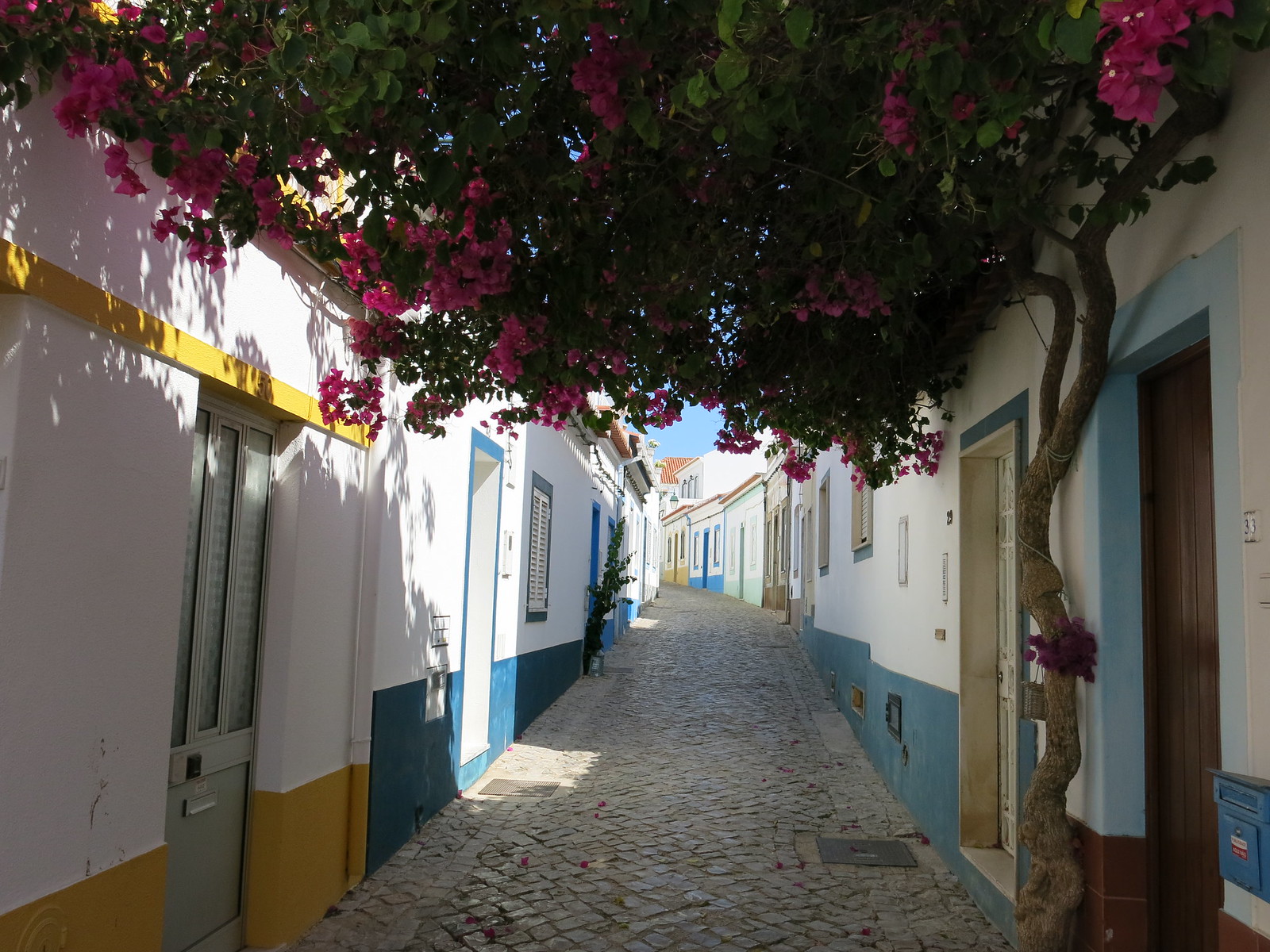 Quaint fishing towns with some tourist infrastructure made for some pleasant walks down narrow streets with typical tiled houses and the ubiquitous bougainvillea draped here & there. And large, sealed bottles of water in people's doorways or adjacent. They are thought to keep bugs away, but I also read that a water bottle on your doorstep will keep dogs from urinating there (and then scores of others) but we never got brave enough to ask a local which is correct. 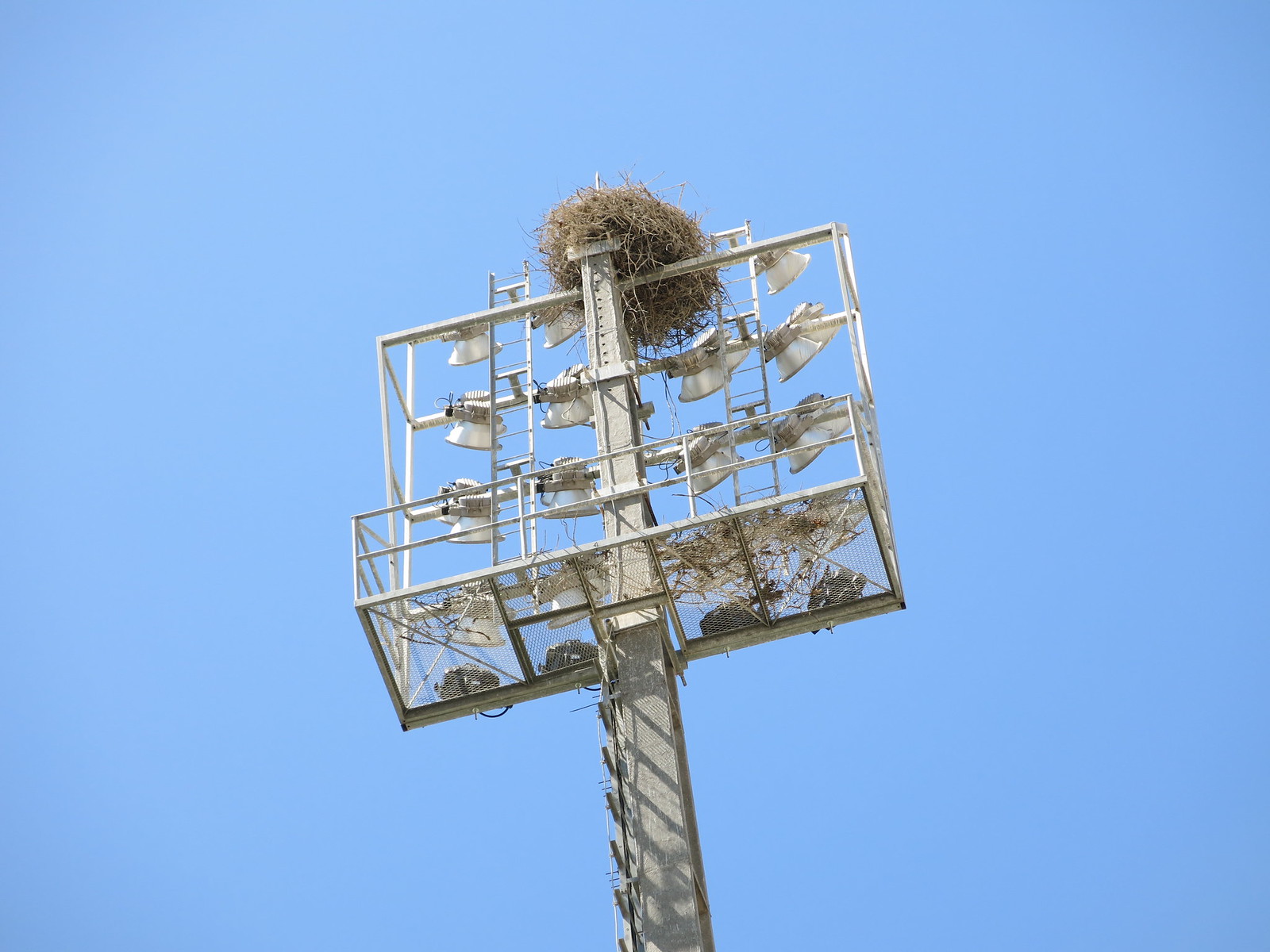 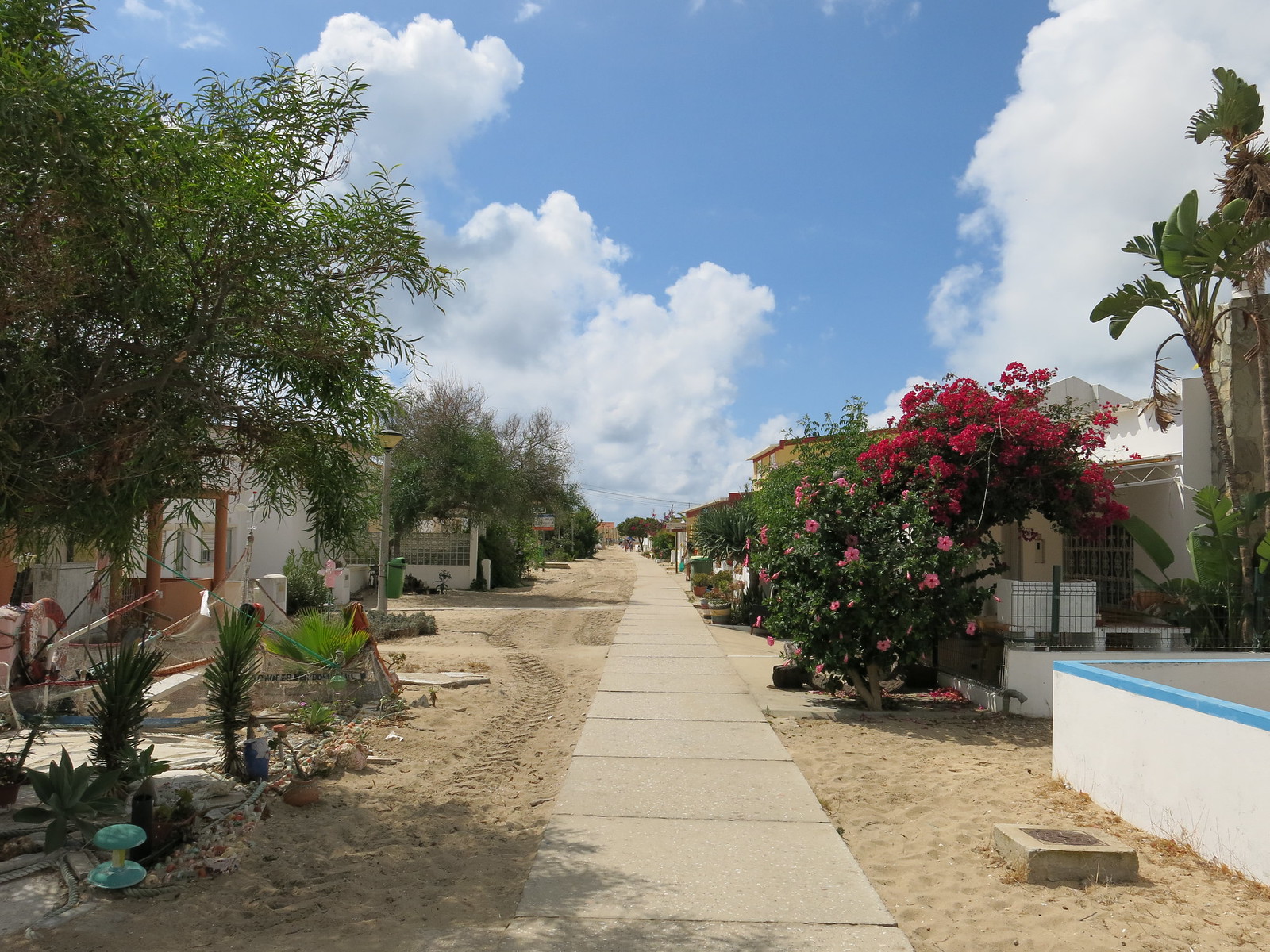 It was interesting to walk on some of the barrier islands where the only roads are made of sand.

We saw loads more stork nests perched on interesting fixtures such as the stadium lighting, and we saw a little owl, some local dogs enjoying the rough doormat of a clothing store and lots of sand with the usual number of oiled up bodies laying everywhere. And that really is about it. 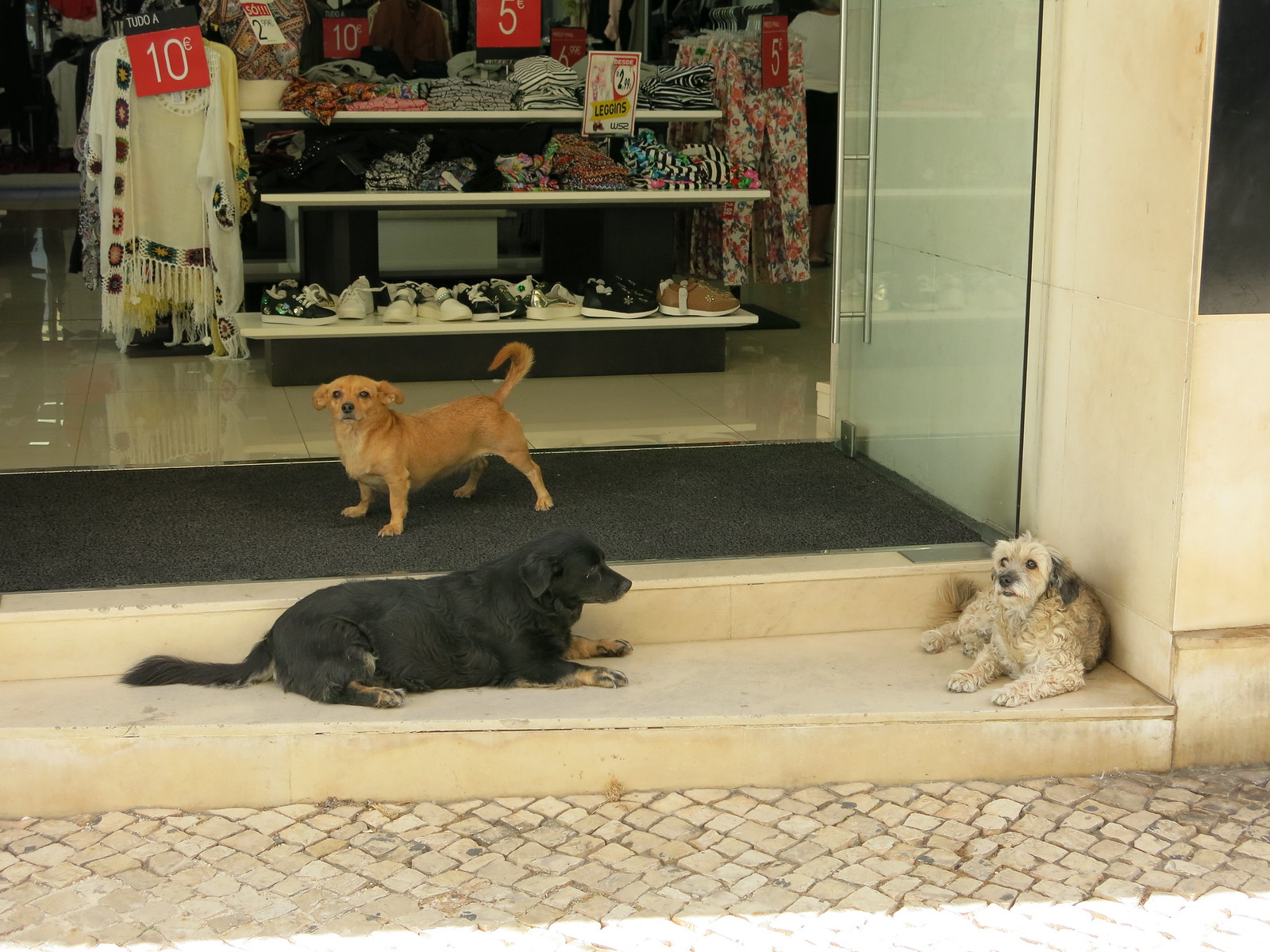 We are anxious to get moving toward Morocco and the Canaries. Jon said to me the other day that we must have a gypsy gene in both of us that keeps us looking forward to new places & new experiences. So that means I don't just have ants in my pants. Phew. 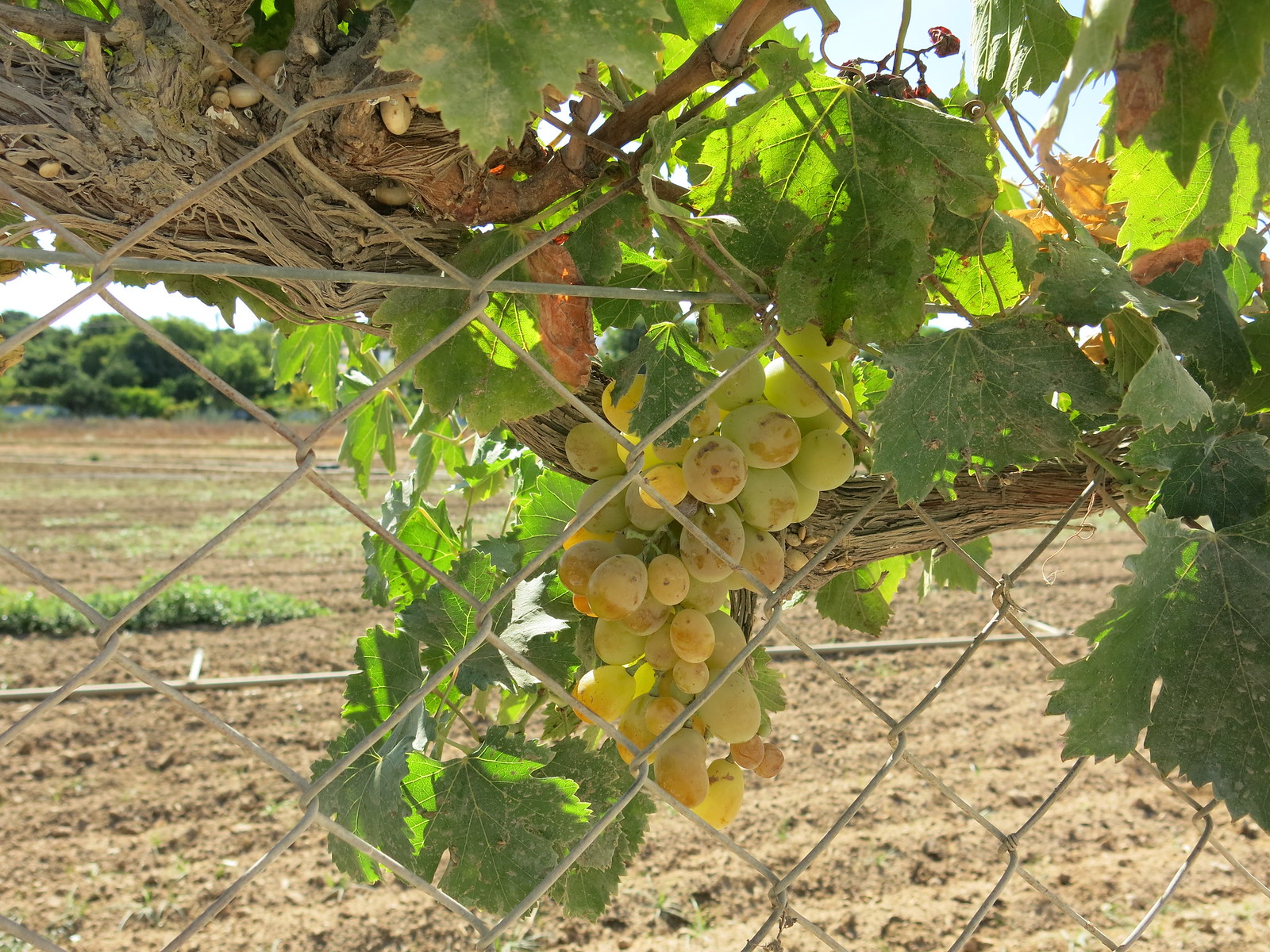