We arrived in the Canary Islands a few days ago after an 80 hour passage with no wind. Mind you, we left without wind in the forecast since there was nothing for more than a week and we didn't feel like waiting around for it. So we sailed for 6hrs and motored for 74! People often keep better track of miles traveled over a cruise than we do (we don't) but we did make a milestone this time which was 3000 hours on the engine!

Other than rigor mortis from not being able to move around and a touch of boredom, it was an easy trip and we saw many seabirds, two different types of dolphin, a whale breaching- probably a humpback but we were too far away to tell, a bit of trash and once again, a warbler joined us for a rest on deck for about 24hrs. He left when we just started seeing the islands. Was he headed to the Canaries I wonder? We saw less ships than we were supposed to and got no weather and no emails. We had two electronics issues- both the AIS and our Winlink onboard email system decided not to work out of the blue so we busied ourselves trying to think of what might be wrong but didn't get to the bottom of it till we arrived. Turned out a small fuse had blown in the AIS system and then the firmware for the Pactor modem all of a sudden required an update in order to work so Jon had those both fixed in a morning. It was OK going without those to get here but we sure hope things go smoothly for the longer trips ahead. 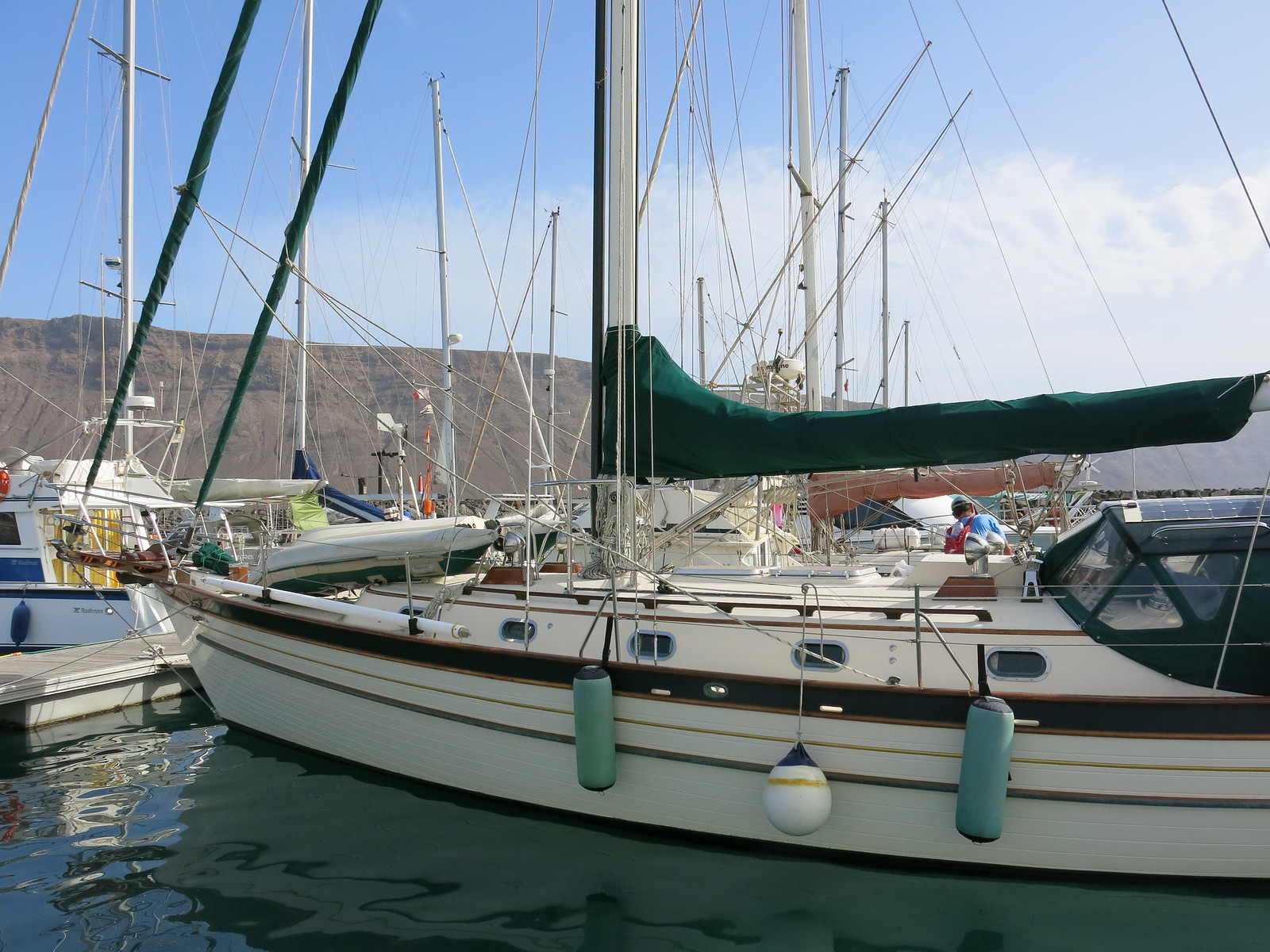 We were able to pull right into a marina on the small island of Graciosa, which is right next to Lanzarote at the top of the Canaries chain of islands. It is primarily sandy beaches and old volcano calderas, no cars except some old Land Rovers that they use for taxis on the all sand roads and a quiet, picturesque, whitewashed town that is very low key. So a great place to walk and relax some in a cute setting and have the boat secure. And the marina is really pleasant. On the day we got here, the wind turned to the east and this brings on what they call "Calima"- boiling hot dry air from the Sahara, laden with red dust and it got windy. So even though we left the Sahara, it had now come to us! It is a kind of dry that makes your skin hurt but laundry is bone dry in an hour! It finally broke today and the wind is back into the NE with more humidity but the vis has yet to clear. We can breathe easier now with some moisture for sure. And we are more comfortable in our skin. 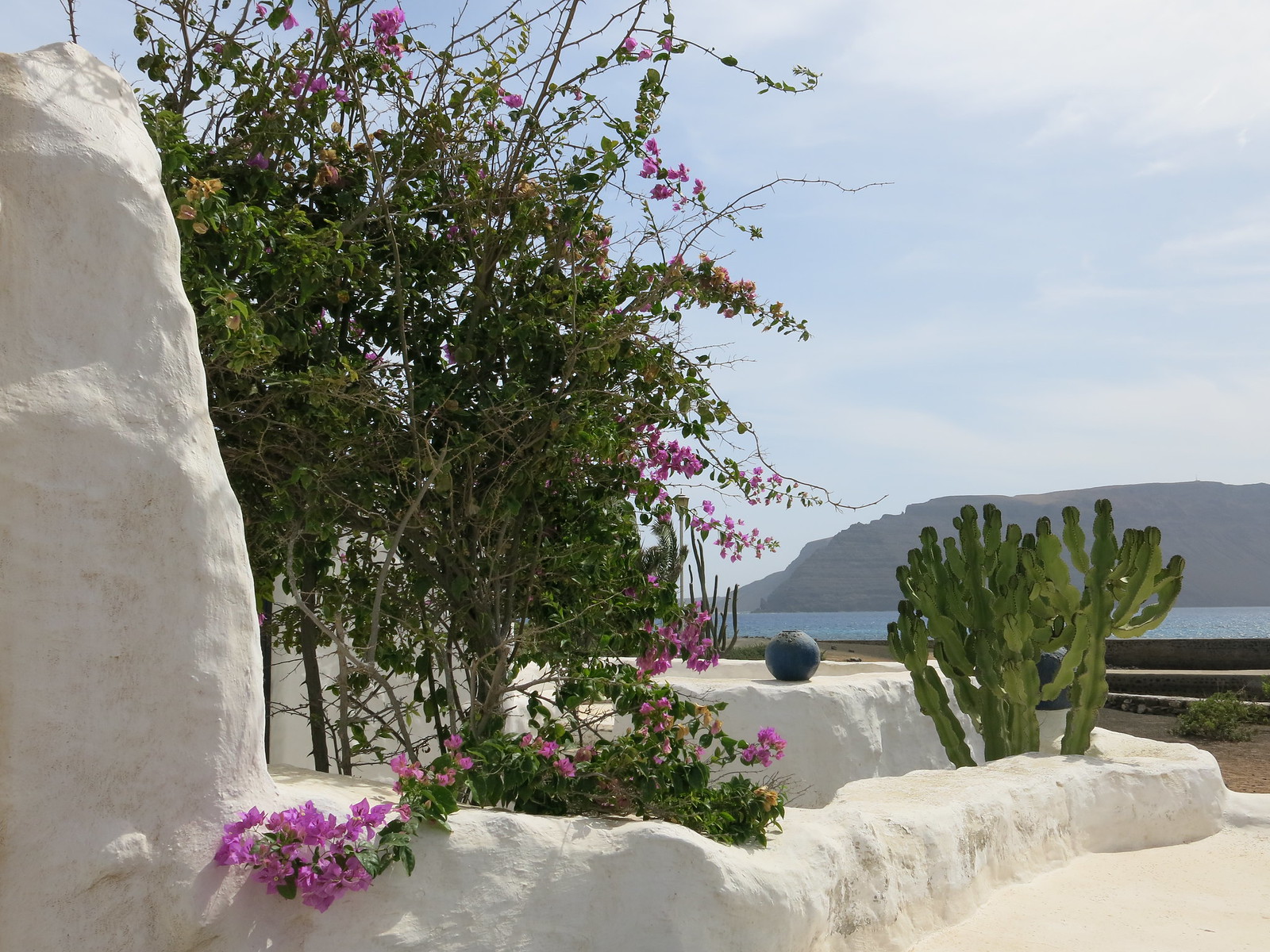 It has been a bit of a mind bender going from Moroccan culture to here, part of Spain. At its closest point, the Canaries are 55 miles west of Morocco and yet, it is a completely different world. We arrived late in the day and strolled the town, which fronts a beach and the marina. Kids were playing naked in the sand, adults were clinking beer bottles toasting the sunset in their swimsuits, people were still in the water and there was this free & easy feeling. The only noise were the laughing voices and the waves lapping along the shore. A whole different place. A whole different way to live. 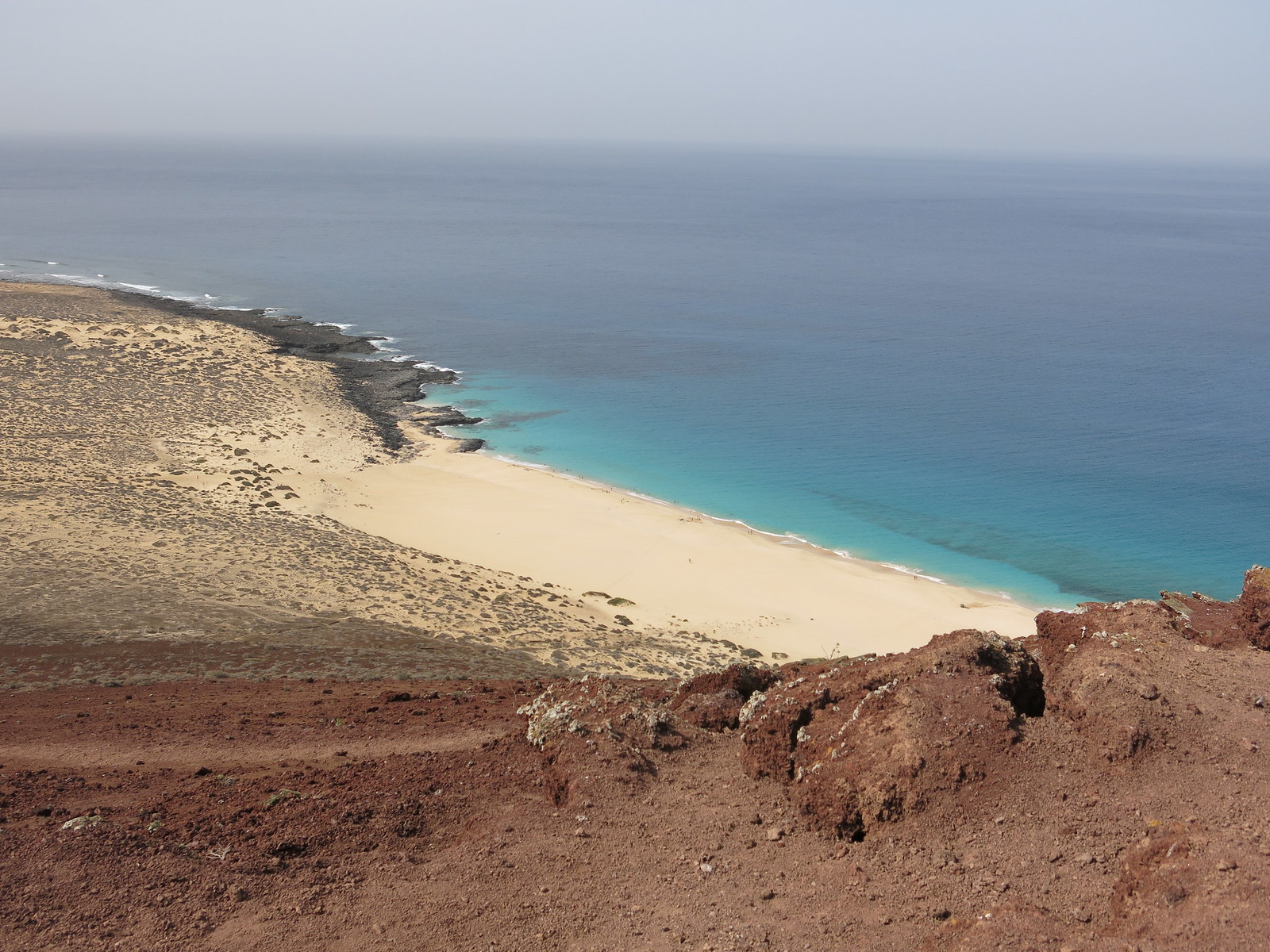 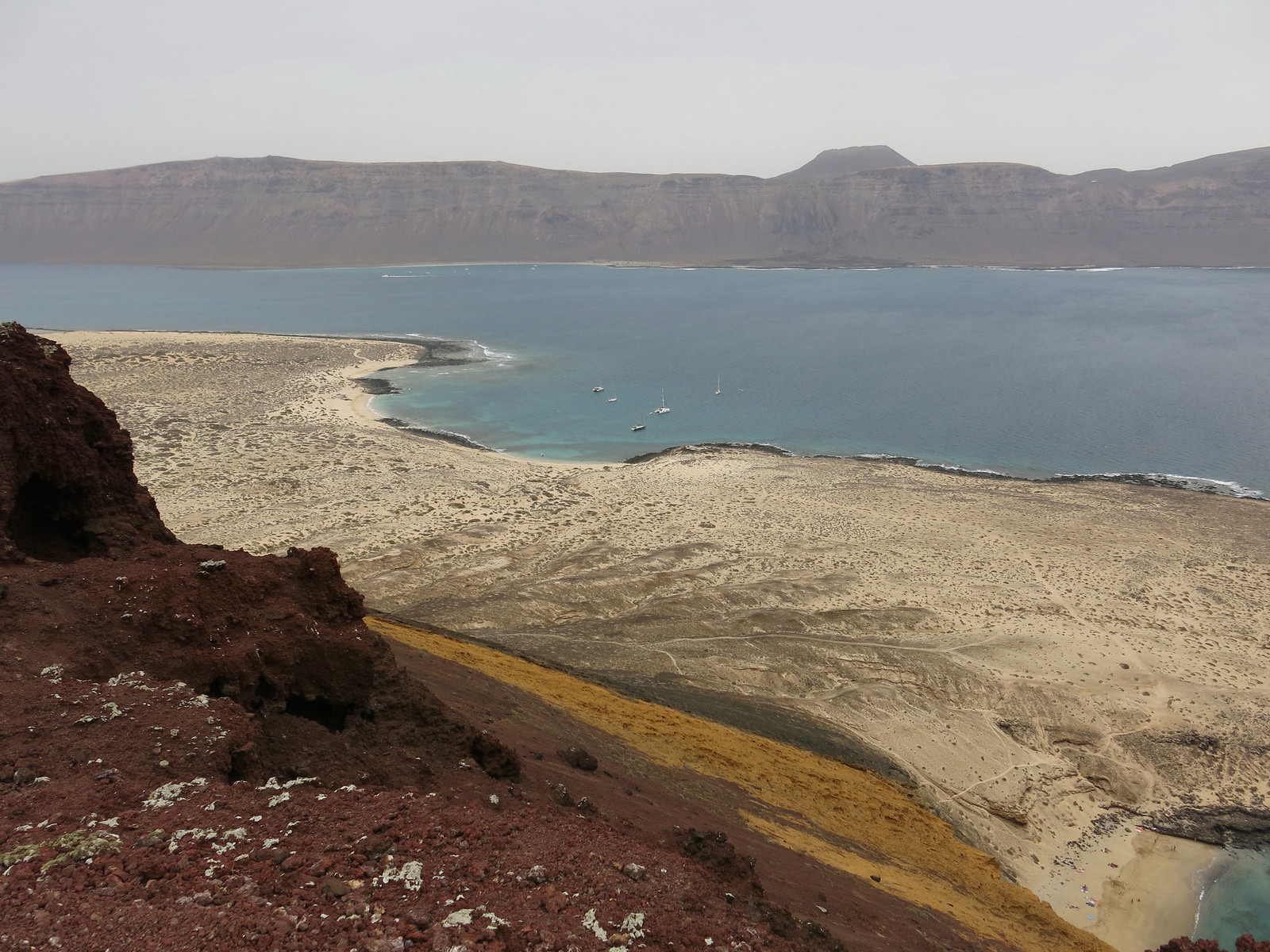 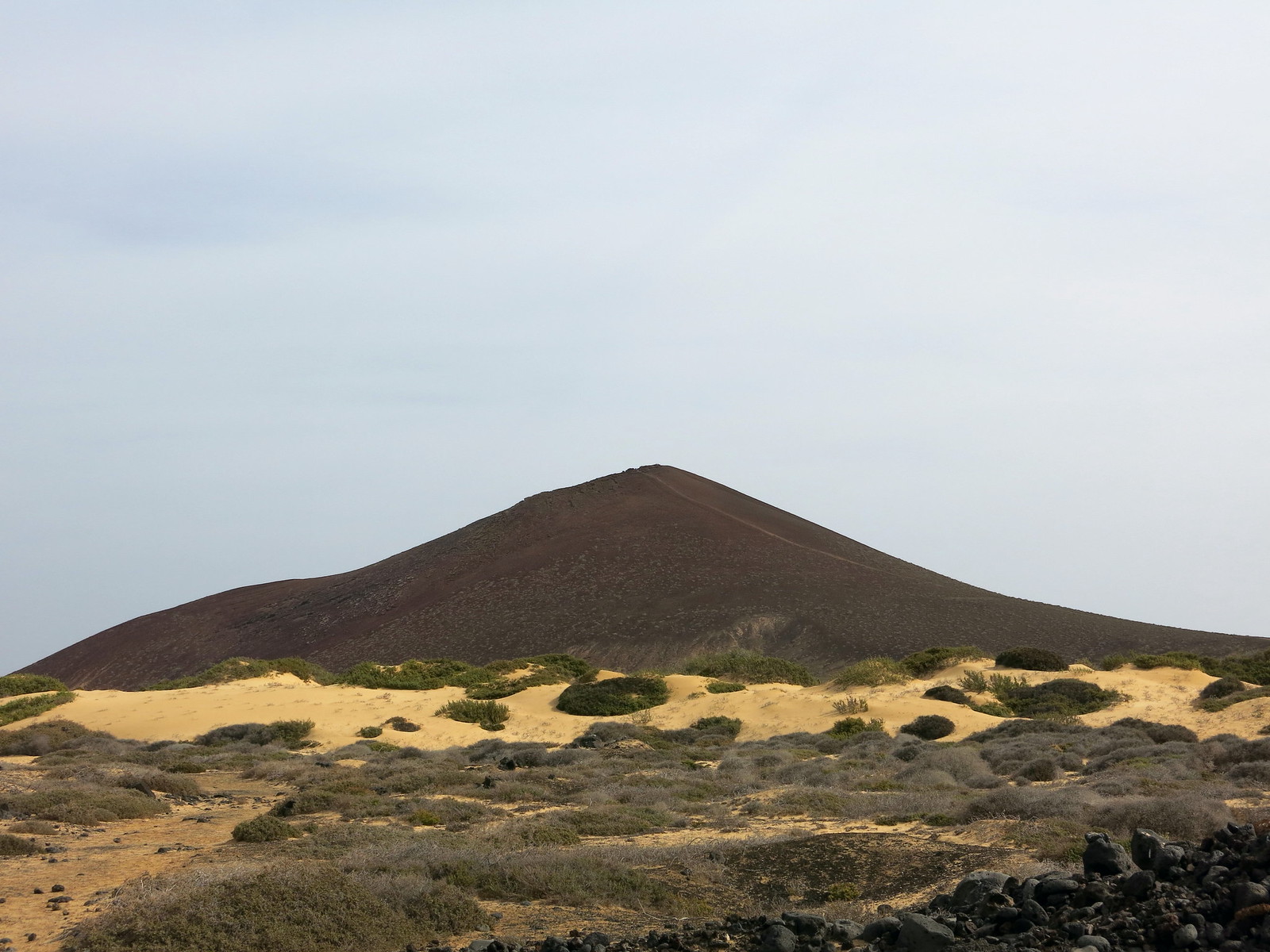 We've been enjoying hiking all around the island and up to all the calderas that have a trail. It is beautiful in its stark way. I read something that said that volcanic landscapes are like Marmite. You either love it or hate it. We are back to chugging large quantities of sports drink and sitting on the seawall after our hikes eating flavor-ice pop-cycles that make us cough. What IS that chemical they put in those things? We've met some other boats and have sampled some Canarian food together- I had limpets last night for the first time. They are basically an aquatic snail. I'm not sure I will ever crave limpets but it was good to try them. I think. 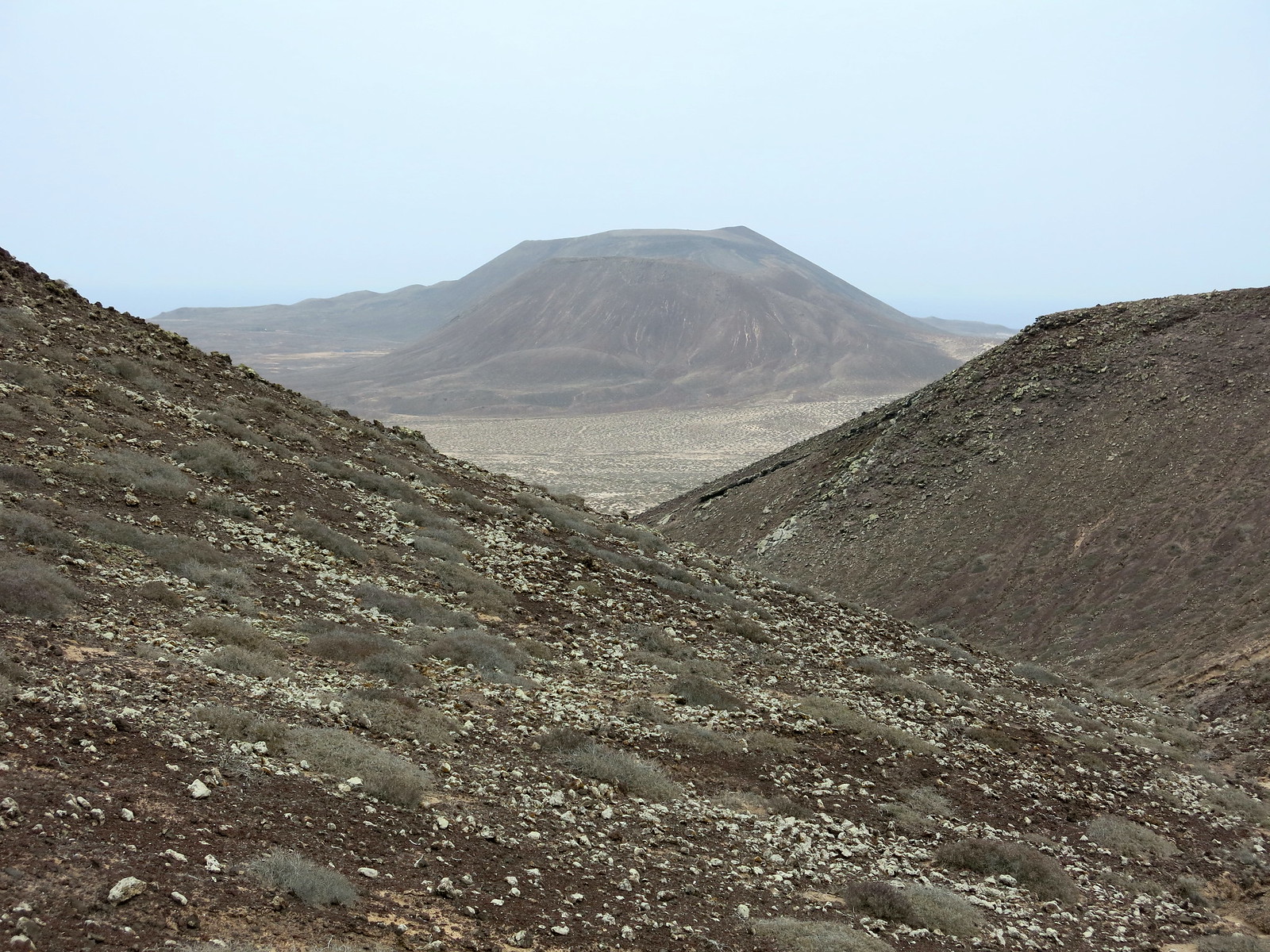 Tomorrow we will move around to the the island of Lanzarote. The car rentals are back to the kind of prices we like- $4/day! So we are going to rent one for a bit to tour around. 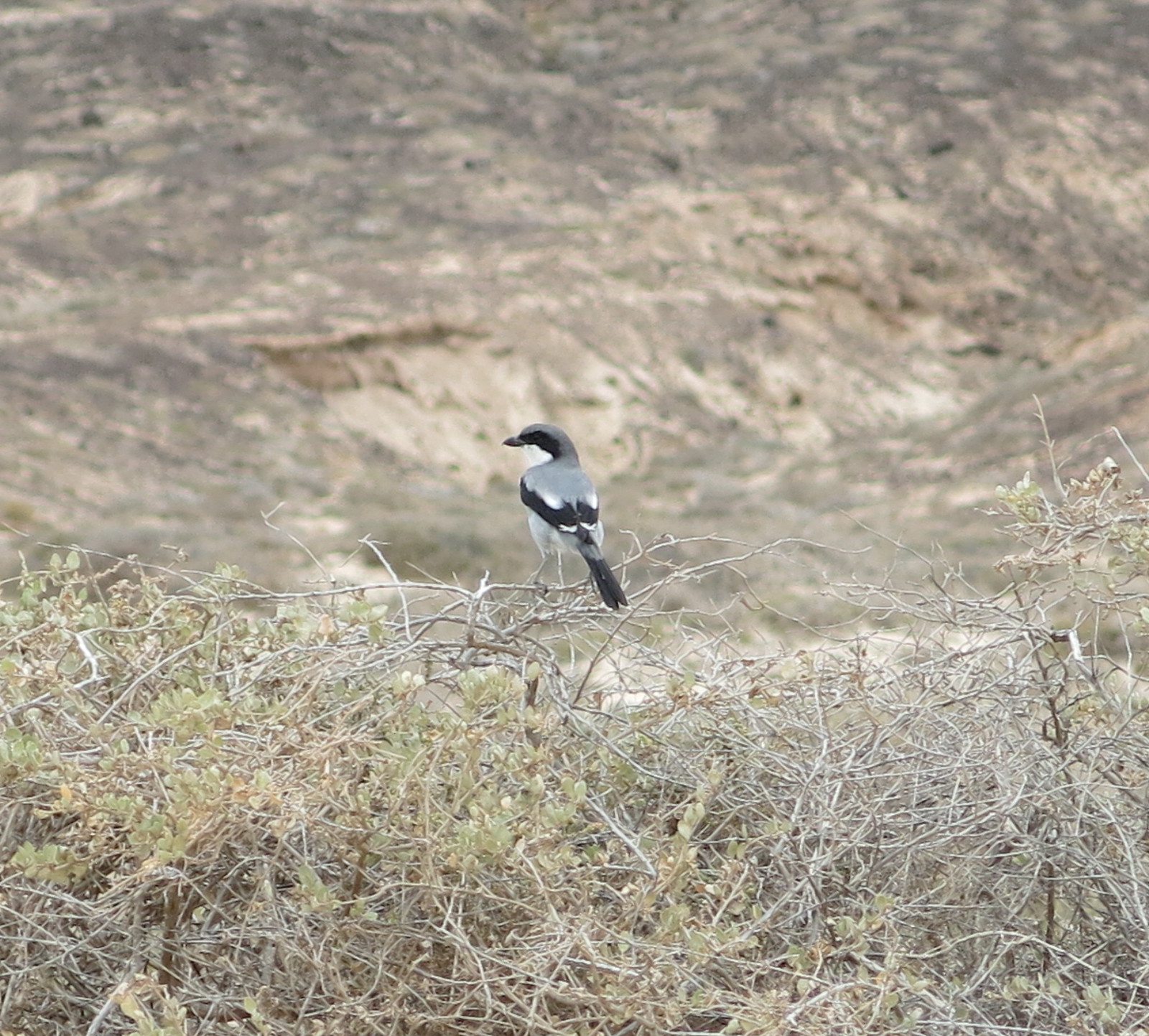