In Between Fixing Broken Stuff Turns out Tenerife is not only a great island to explore & hike on, you can also find what you need to keep your boat going too. We've been quite busy lately staying on top of things breaking and fitting in the fun stuff we want to do.

Santa Cruz de Tenerife is headquarters for Jimmy Cornell's Odyssey rallies and everybody was piling into the marina while we were there to do last minute preparations. We saw Jimmy in the office, taking care of his flock. Wow, we are all looking older- Jimmy too! He is such an icon for cruising though and it is good to see so many boats heading across. Should help the Caribbean get some money rolling in. We were on an overflow dock out with the megayachts enjoying frequent power outages and card key access malfunctions, sometimes the only way onto the dock was to climb up on the gate and push the handle down using a large PVC pipe while Jon yanked on the handle at the right moment to open to gate. Despite this, it is still nice to be right in the city. This auditorium is right at the marina entrance and reminds me of the Sydney Opera House. 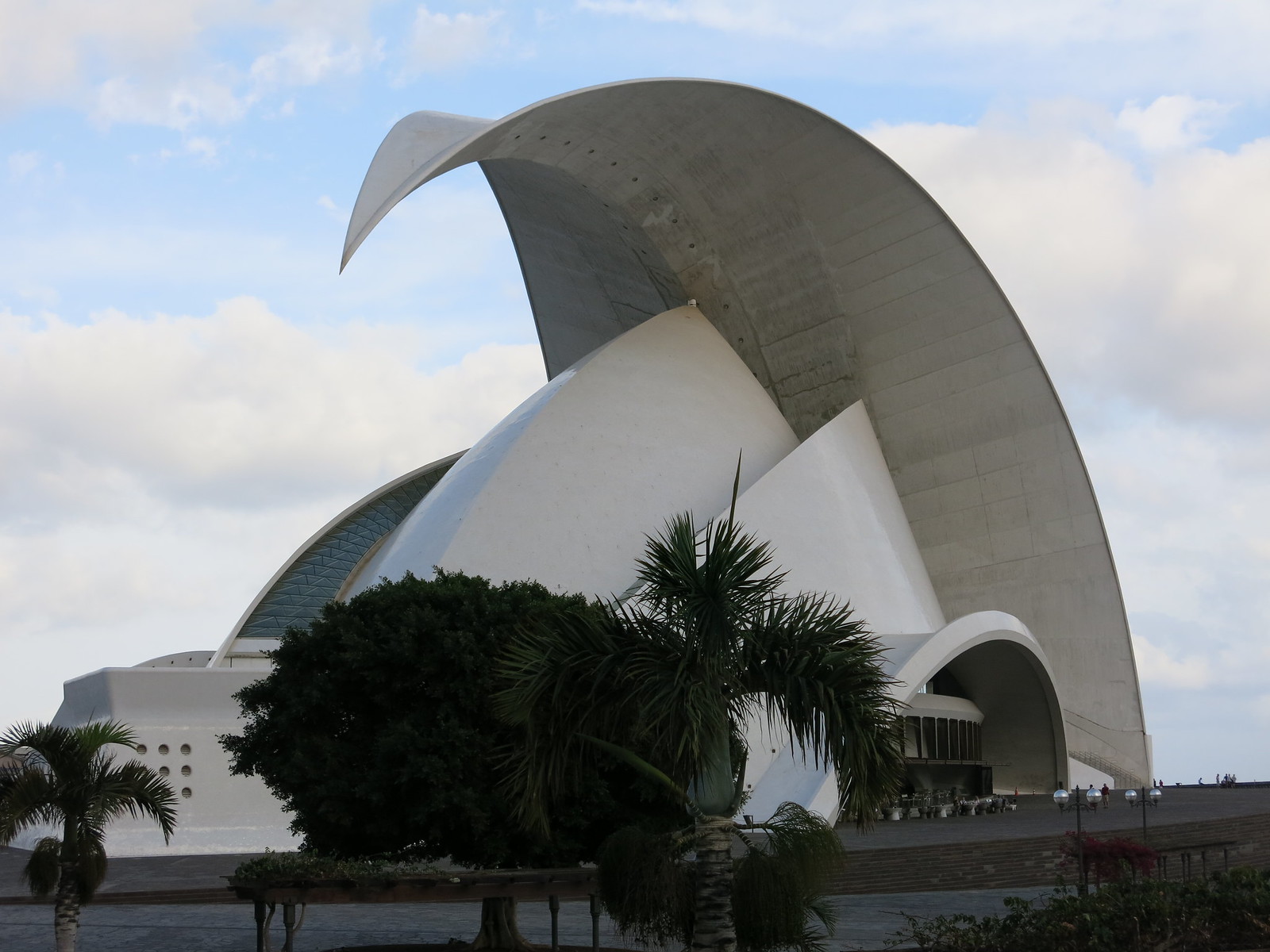 We used the car to get new batteries which took 3 trips- one to order them, one to go get them and one to bring back the old ones and get 80 Euros back for the lead. This after having just added over 5 liters of water to them! We also finally were able to get our USA propane tanks filled since there hasn't been a place since Rome and we'd been making do with a big orange rusty exchangeable cylinder instead. Jon was able to resurrect our Greek phone which had become totally useless with all the bloatware that Alcatel keeps installing on it. It got to where we couldn't do a thing on it nor have it unplugged at all because there was so much stuff running on it the battery would go dead. But he found a program online where you can basically hide all these useless apps so everything sped up again and we can actually use the smart phone again! Then the wifi on my laptop died. We looked for parts but in the end there is no fixing it since like all electronics, the updates eventually render your device useless. So now I have an umbilical cord that attaches an external wifi antenna. Sweet! Then Jon's laptop died- completely dead, we had good warning but were hoping to avoid having to buy a Spanish keyboard laptop here. But no, he will now have to get used to one. Then a circlip fell out of the end of the spinnaker pole so we had to search that out since we are hoping for a totally downwind passage across the Atlantic with the sun out the whole time and so we'll need the pole! The owner of the chandlery just gave Jon 3 of them for free, on his lunch break when the store was actually closed. People are very kind here. So we feel like we made progress with those things and our backs have healed from heaving around 12 golf cart batteries. We even threw in appts to get our teeth cleaned. We were thinking back to the simplicity of our first cruise in '97 when we had a fridge and a GPS onboard at that was it......

By being docked right in the city, we used any spare moments that we were at the boat to enjoy the old buildings, the Plaza Espana with its large green pool of water, and all the pretty parks & museums. The Canarian architecture of the varnished wood balconies is very evident and we like the way the towns on Tenerife and Gran Canaria have been so colorful compared to the first islands closer to Africa where they use only white paint for everything. Time is running thin for our favorite Spanish menu del dia where you get a 3 course meal and a cana at lunch- and here we get Canarian specialties. 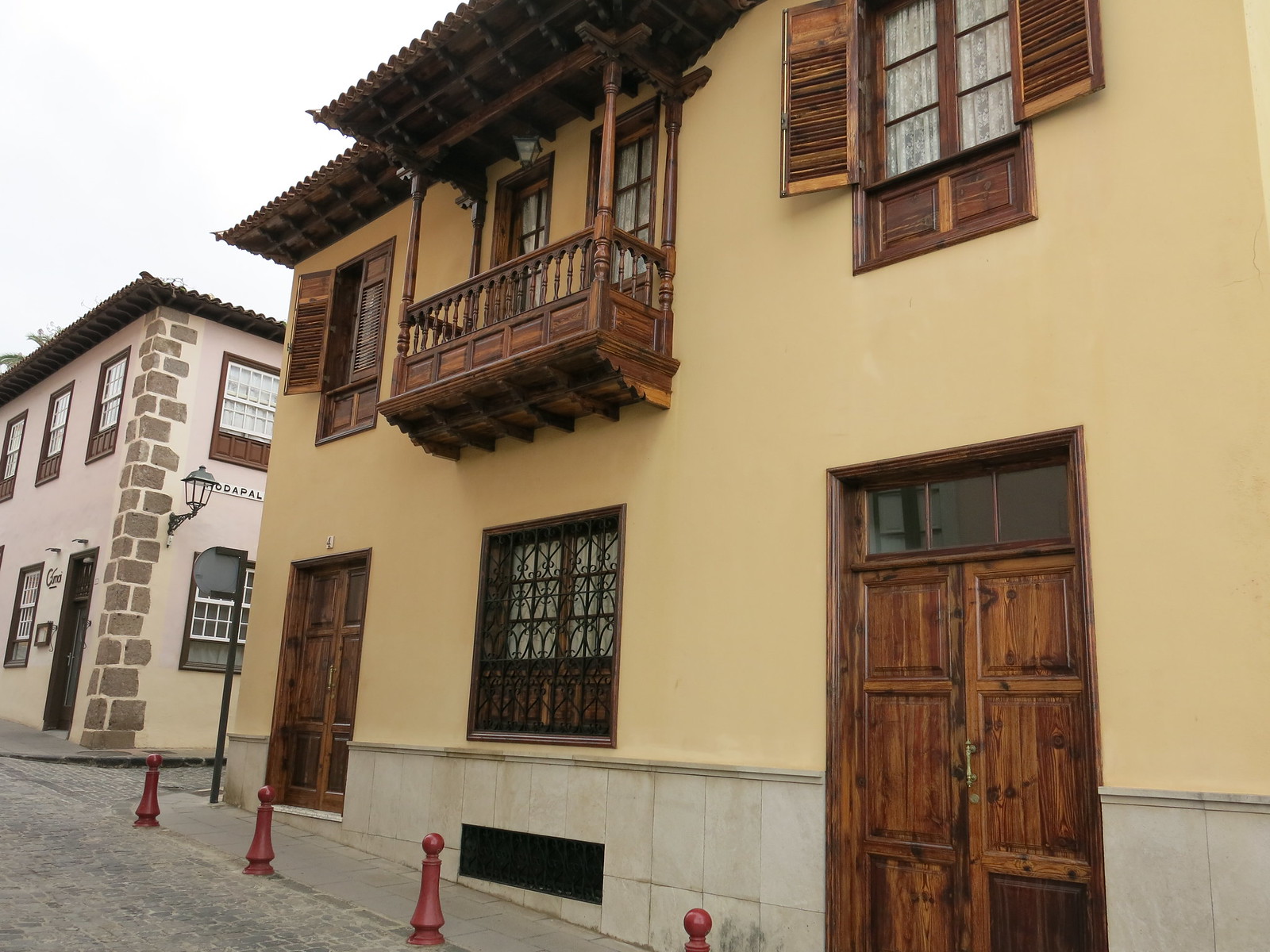 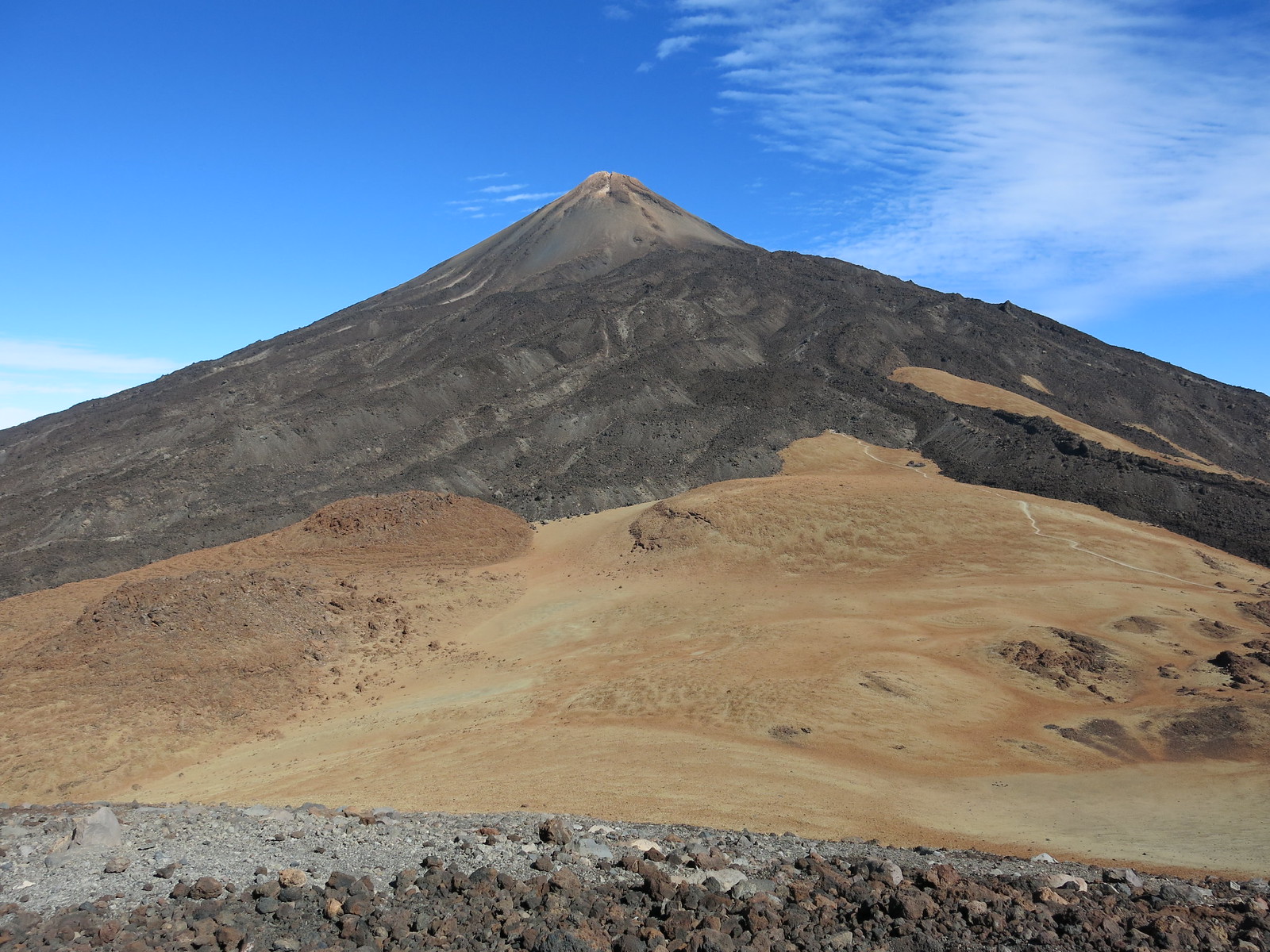 Amidst all the chores, we did a good tour of the island seeing a lot of it. It is so nice to see all the green trees and breathe in the fragrance of pines, flowers and eucalyptus. I only wish that when I looked up into them, I could see the koalas like we did in Australia. It feels like one should go with the other. While it seems a bit uni-dimensional, we keep leaning toward hiking more than anything else. It's just so beautiful with varied terrain and we have a lot to talk about anyway so it is a good activity for that. We did 2 days in the Anaga Mountains, the oldest geographical region of the island and full of trails. They either go straight up or straight down to the sea. Good hamstring & quad work-outs and always lots to see over a picnic lunch. We've met lots of friendly cats & dogs. 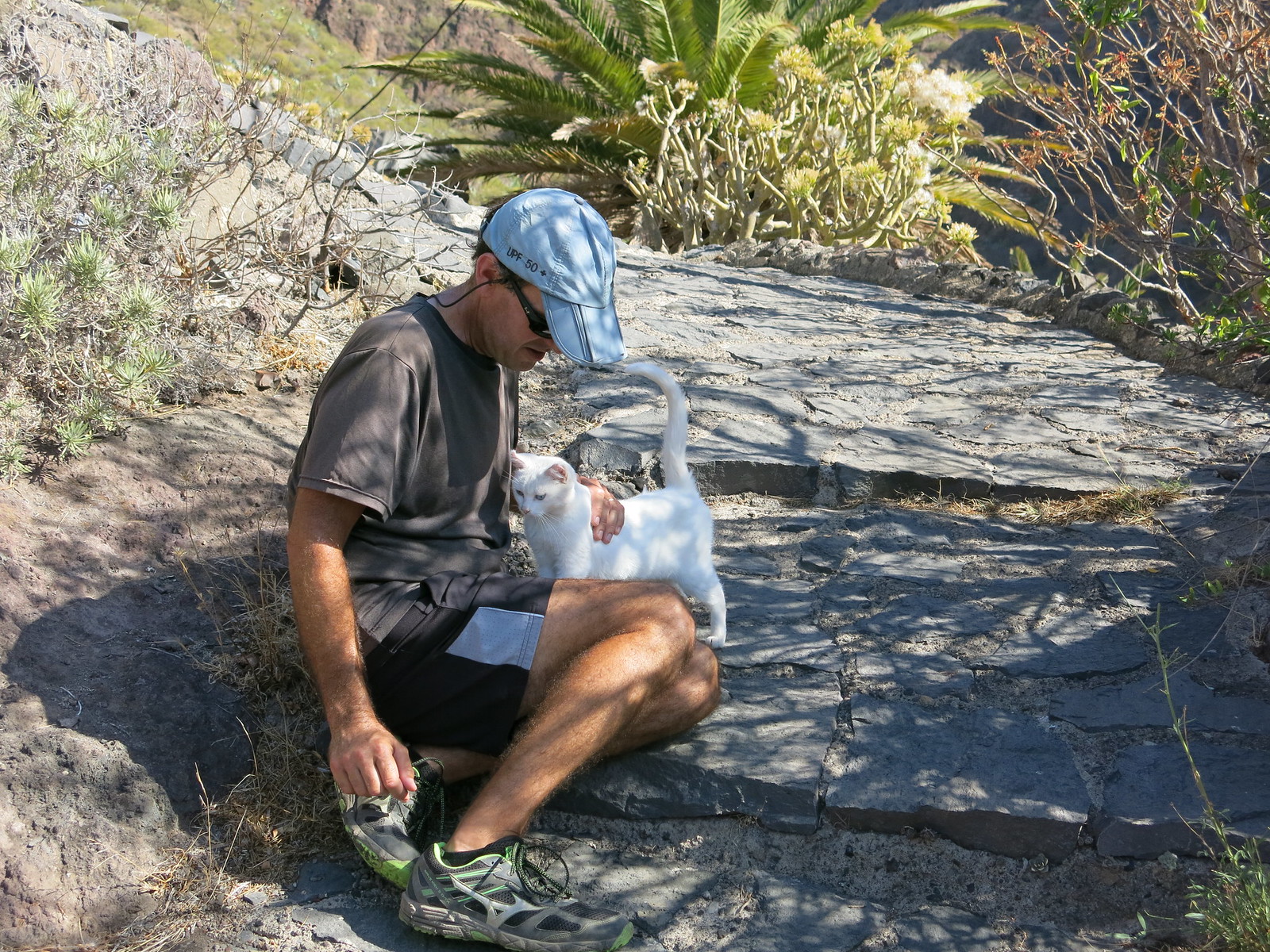 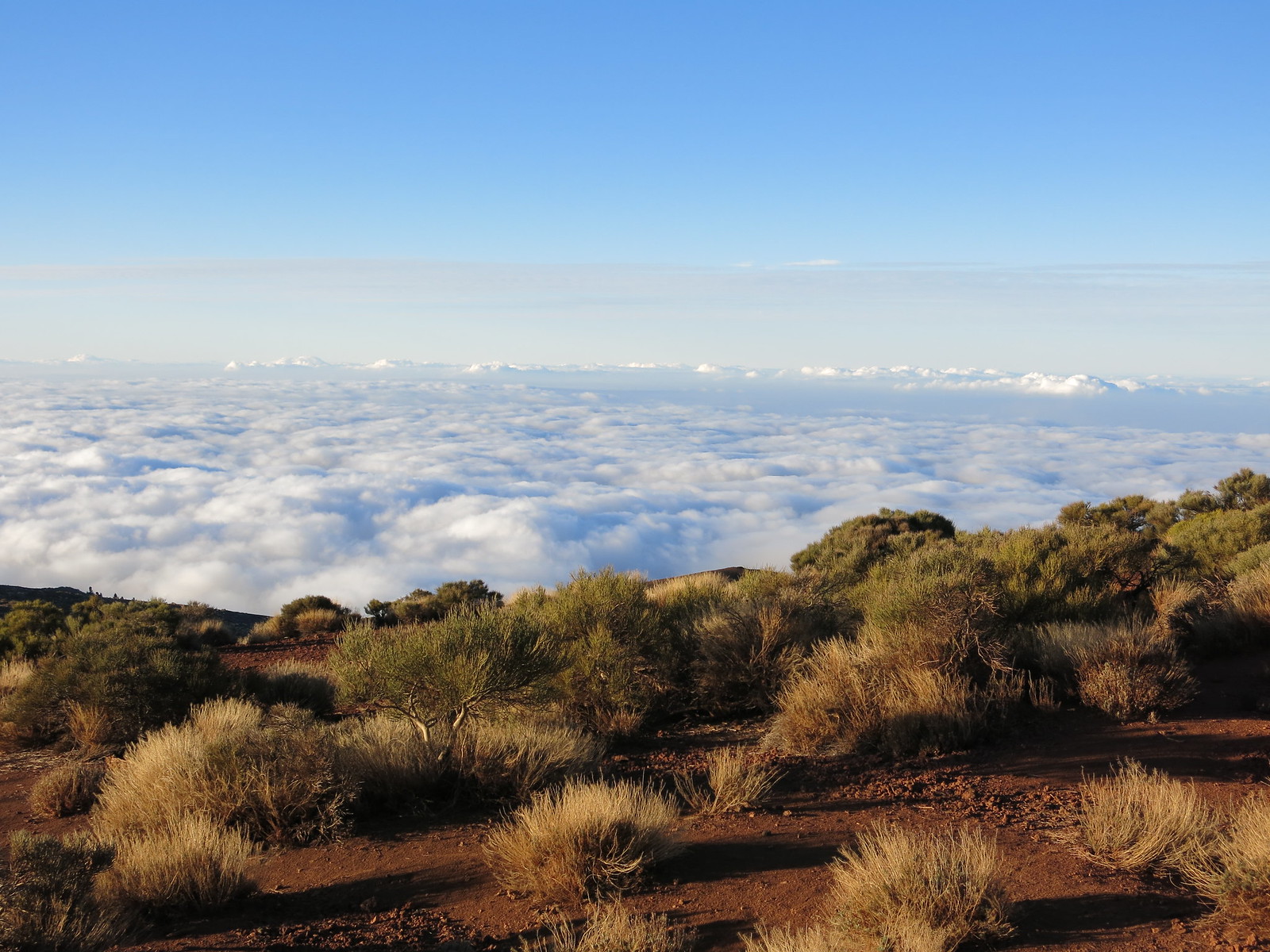 We did another 2 days in Teide National Park. Driving the park road is pretty spectacular especially late in the day when a layer of clouds has formed down low like a valley and you are way above as if you're flying above the clouds. There are sections with old Canarian pine woods at lower elevations as well as raw volcanic scenery up higher where around 4 million tourists a year visit to take in the Spain's highest mountain & its surrounds. You need a permit to reach the summit and for that you have to plan over a month ahead so we couldn't get one, nor a space in the refugio where you could summit first thing in the morning. But we did get to climb adjacent Pico Viejo and still got high with great views of Teide itself at an angle that blocks out the teleferique that carries people to within 600 meters of the summit. And we had this summit to ourselves. Along the way there were a lot of lava bombs & pinnacles of varying shapes & sizes. 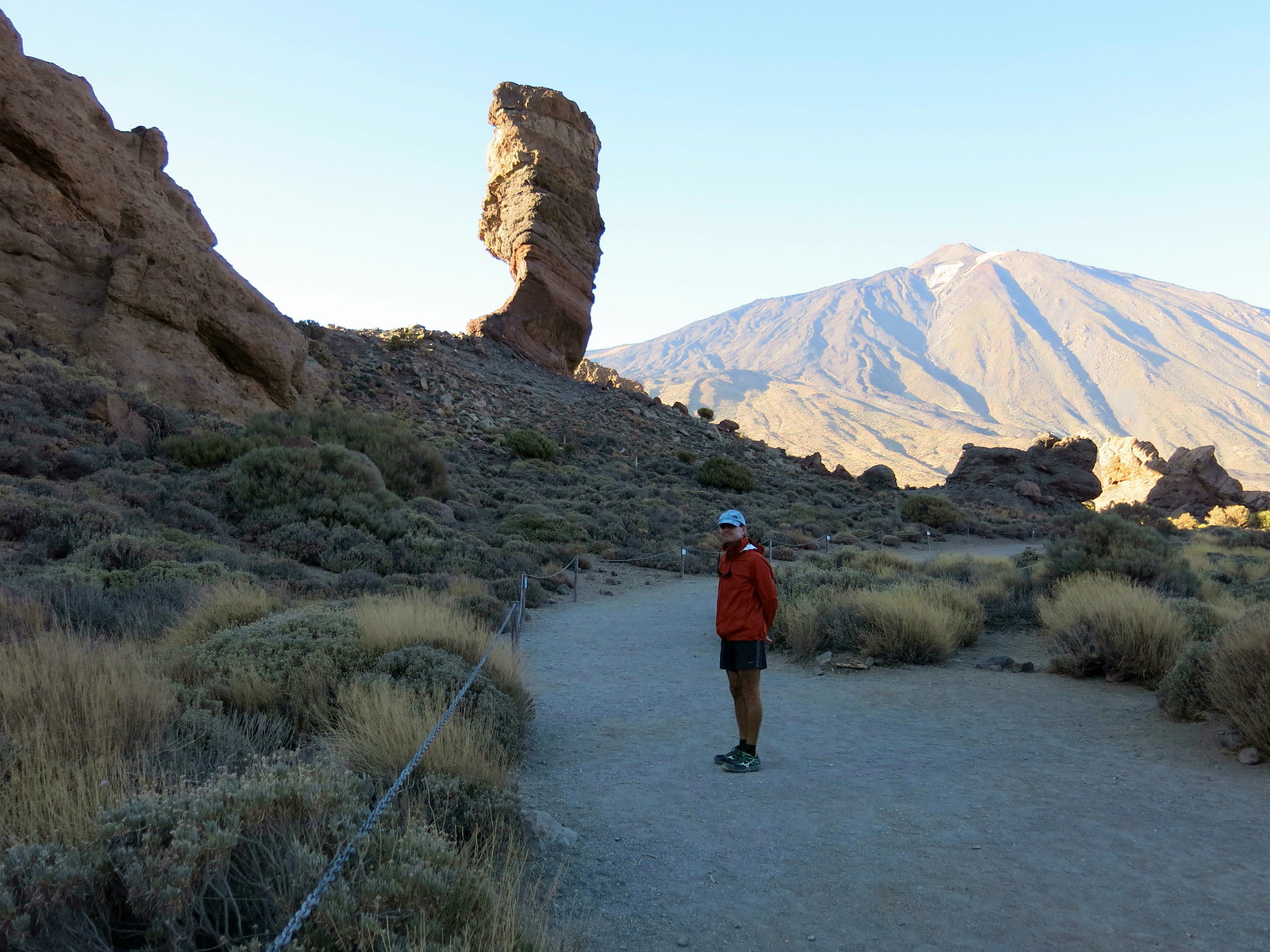 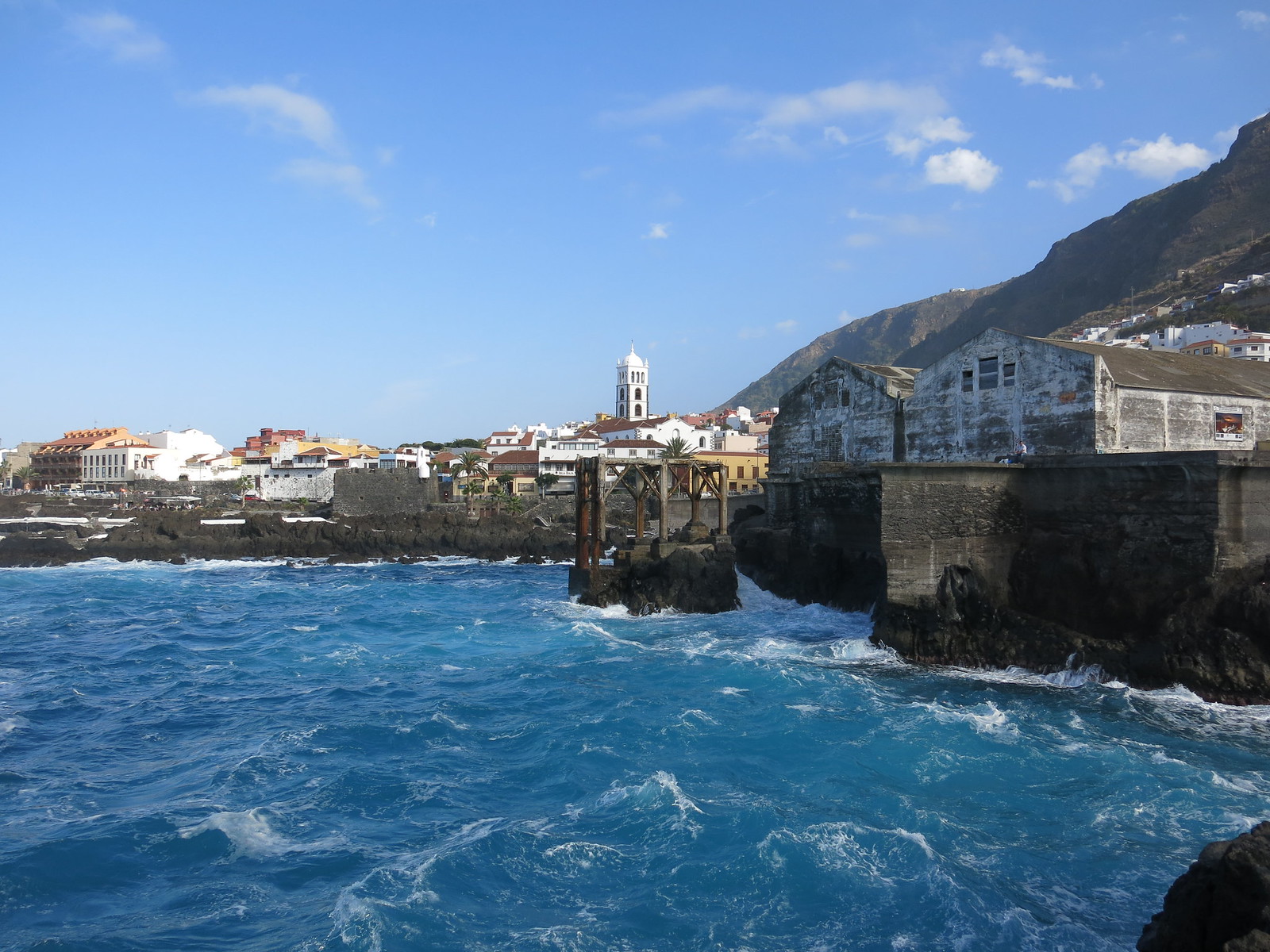 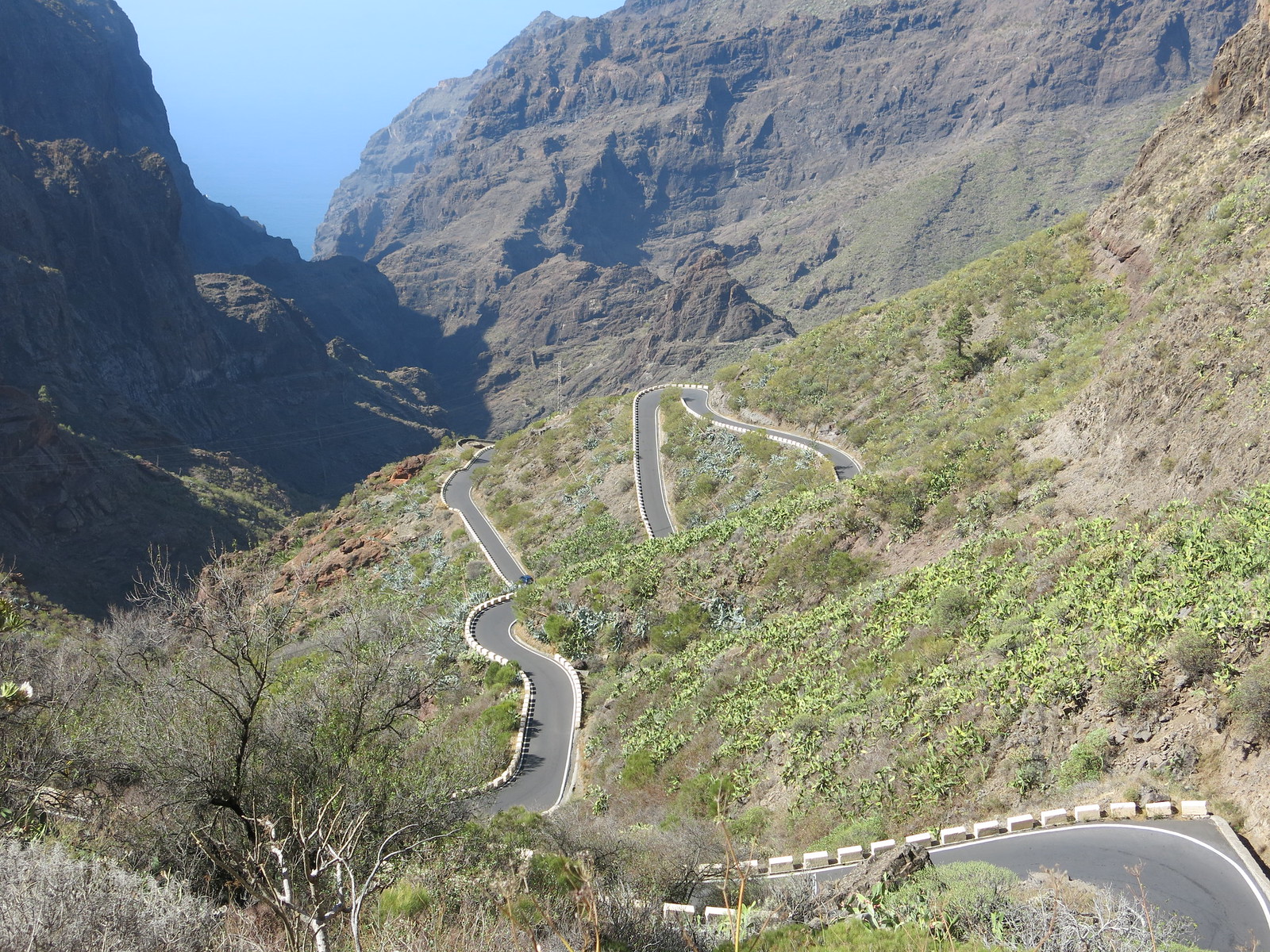 We weren't sure if we wanted to sail around to the northern side of Tenerife or not so we took a great drive over there to check out the marina & coastline. Really steep, twisting roads here! It was a very windy day and the seas were piling up on shore. Then we get to the marina and it's built like a fortress. It's really a work of art as many of the marinas around here are. The cute town of Garachico was once the most important port on Tenerife with great wealth until 1706 when a huge volcanic eruption buried most of the town and filled the harbor with lava rendering it useless. All the wealth moved away and they instead adopted the motto "Strength in Adversity" because they also suffered the plague, a devastating locust bloom, some floods, etc. Since that time, they have never had a port until 2012 when with EU support, they finally got their harbor back. Now it is as loved by the locals for fishing, strolling and doing exercise walks as it is by the boaters. We watched a guy catching fish by feeding them some old baguette, then scooping them out of the water with his hand onto the cement steps and picking them up to put in a bag. Easy dinner. 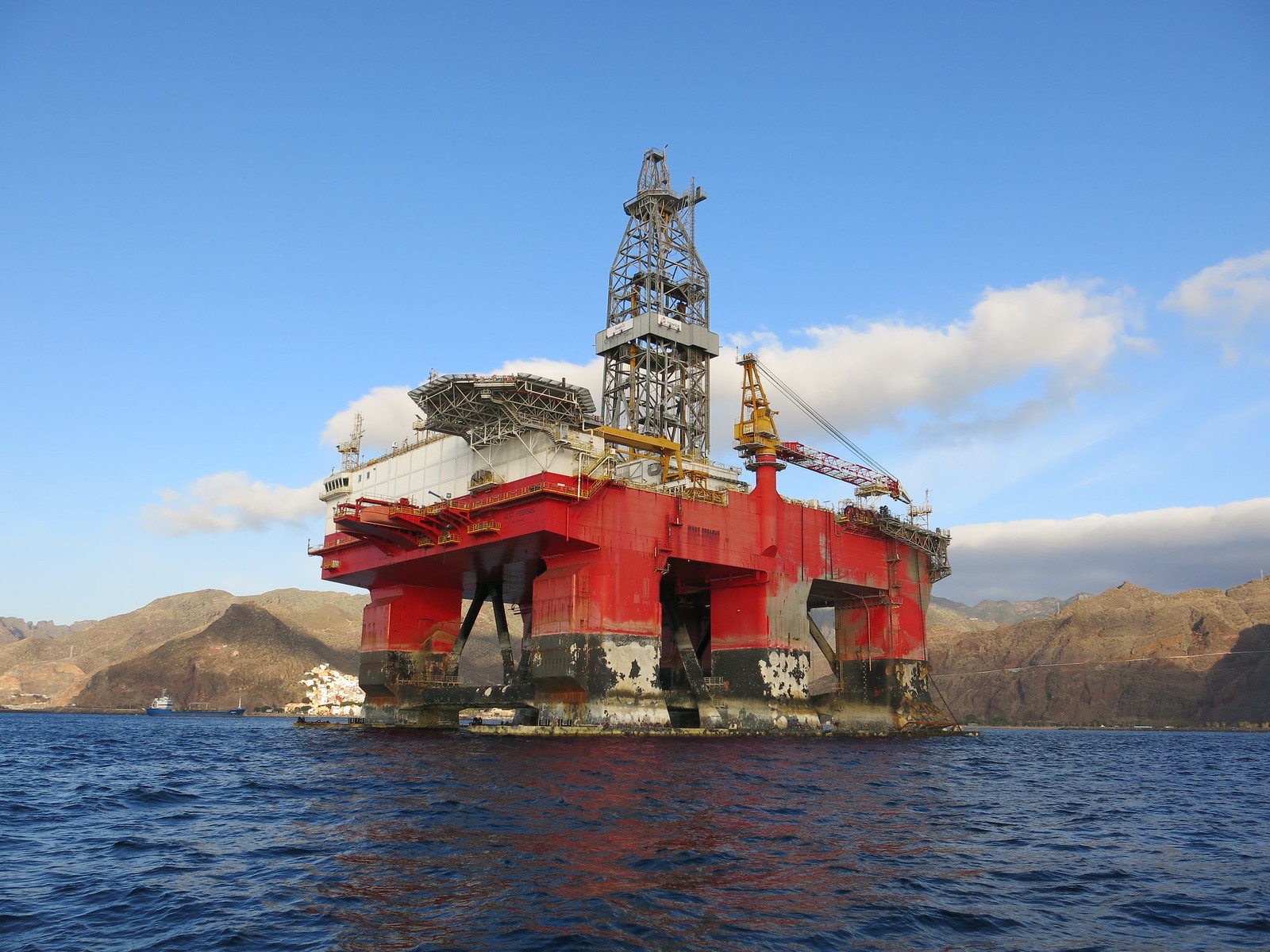 Anyway, we decided we wanted to sail around and spend a few days there. Along the way, we got up close to several offshore oil rigs since for whatever reason there are several anchored near shore. The wind had died so we didn't surf into the marina and it was so peaceful to be there. We did a long hike one day up the old lava flow to the volcano that blew its guts out on the town 311 years ago. This town has a great feel and I love the look of it. They've made lava rock swimming pools out of their old harbor and the old fort, the only building to have survived the eruption, still graces the waterfront. We will really miss all the lovely squares and beautiful buildings of Europe. 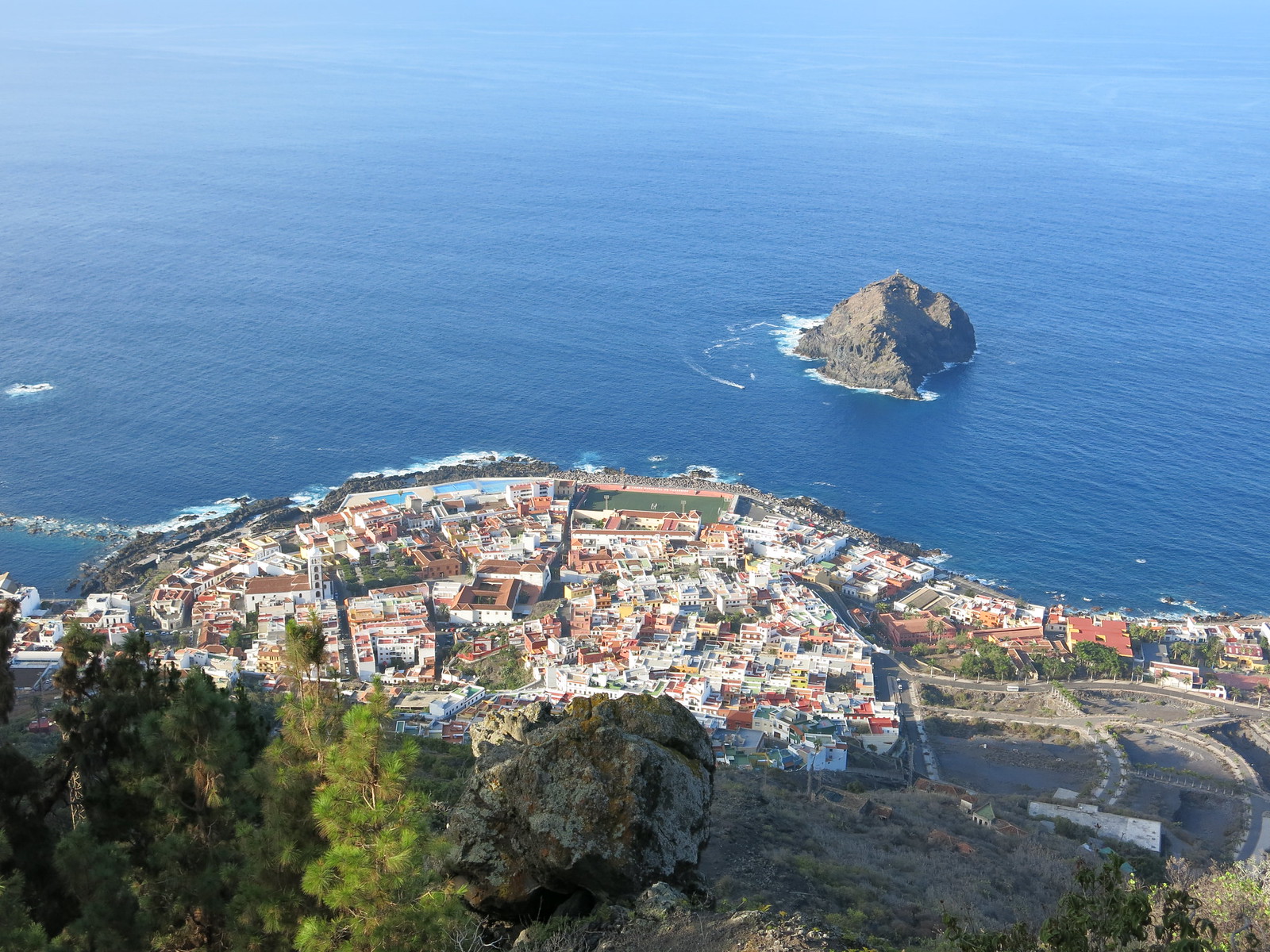 We've been meeting some boats headed across and whether our schedules will line up is hard to say but regardless, its nice to hang out with some new faces.

And now we're on La Palma, motored over here today in calm seas. It is very green and picturesque. We'll try to rent some wheels to get to the best of it. 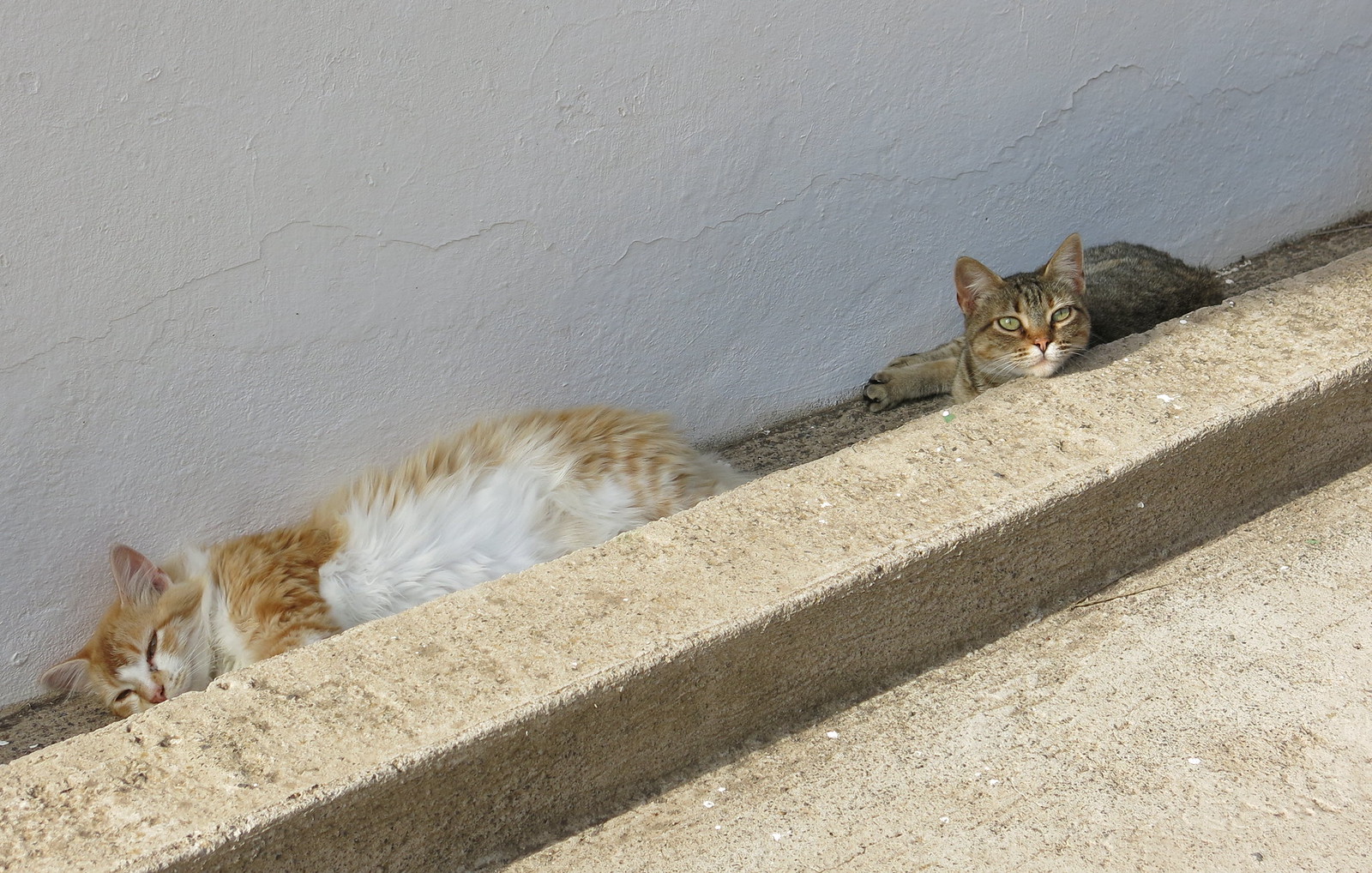