Ever feel like you're being watched? We did the other day while having lunch in the car after a hike.
We met a different raven on a mountaintop and gave him a grape, which he ate. Then we gave him another one which he hid under a rock using his beak, for a minute, before going back to uncover it and eat it anyway. I guess he can't resist grapes! 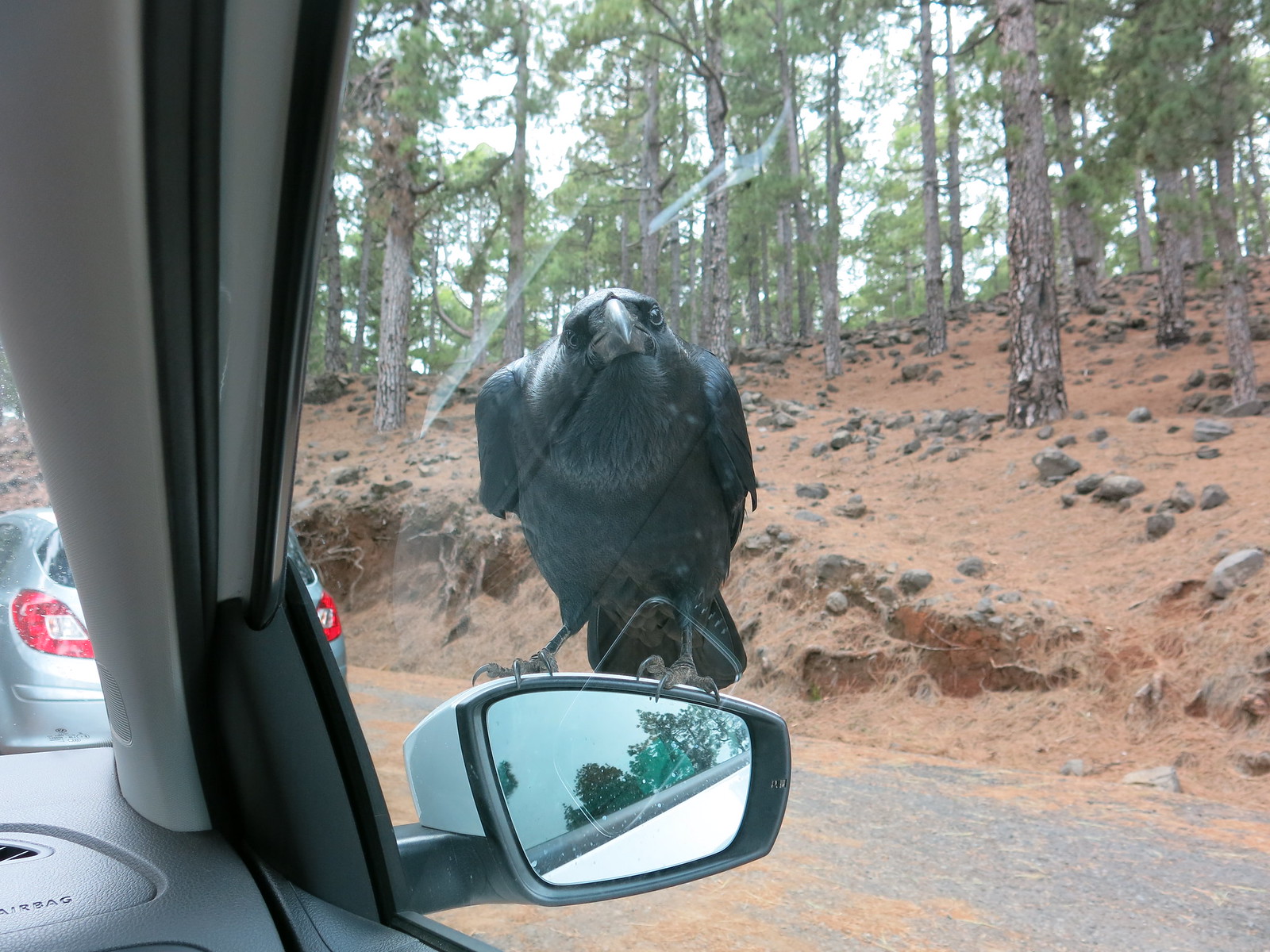 We've been exploring the island of La Palma, the furthest west of the Canary Islands, known for great hiking. It appears to have more weather too. We stayed at a really nice marina in downtown Santa Cruz which is situated such that it gets a lot of swell so the boat is in perpetual motion. You get a double loaded slip all to yourself so you have room to rig a web of lines. We had several days of wind while we were there so we got our sea legs after a few days in the berth. 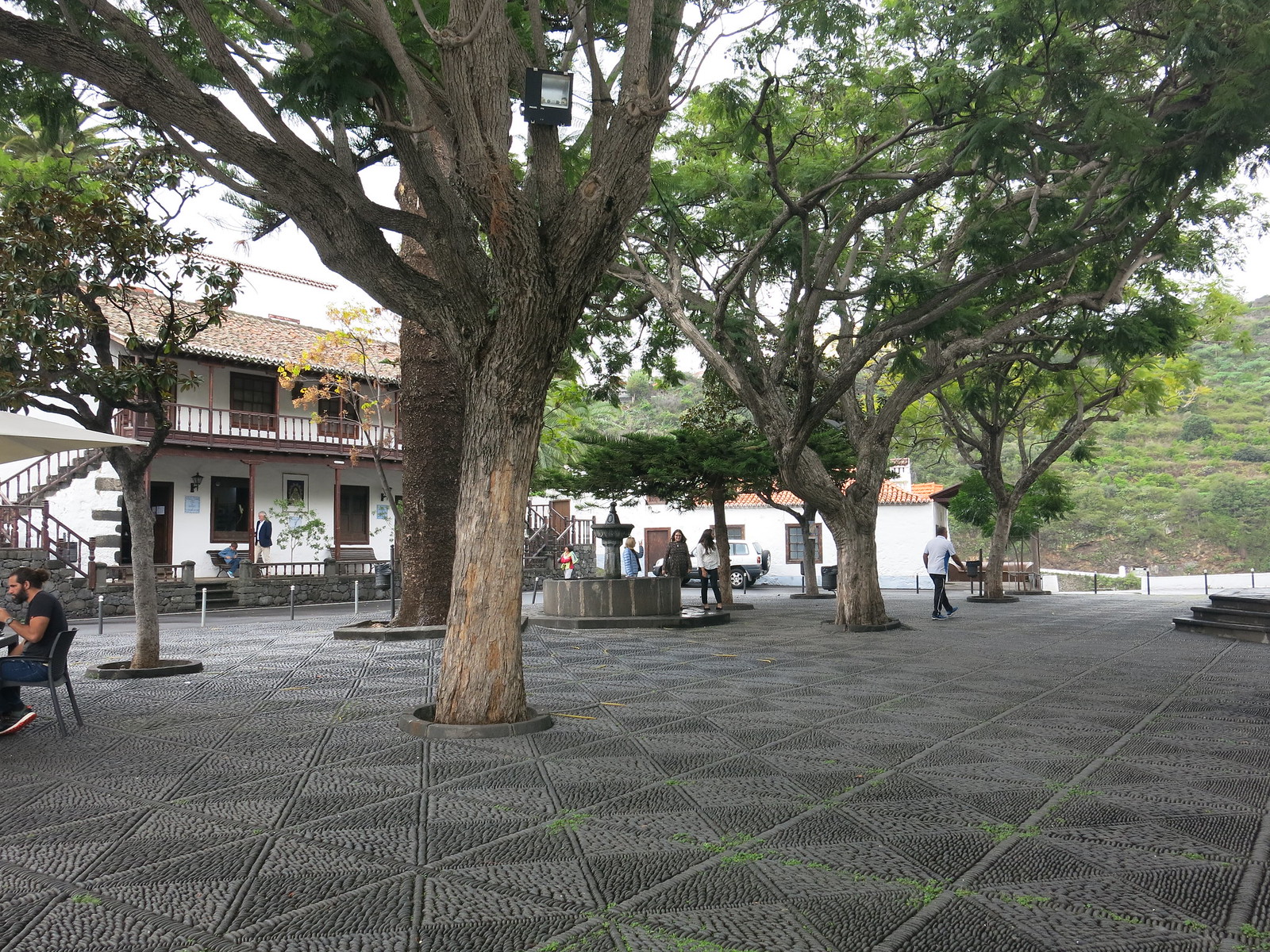 We arrived on a weekend and so got to participate in the Spanish tradition of Sunday BBQ chicken. Everyone is outside, enjoying the day and then eating a big BBQ meal at 2pm with friends and family. Another lovely square to be in... 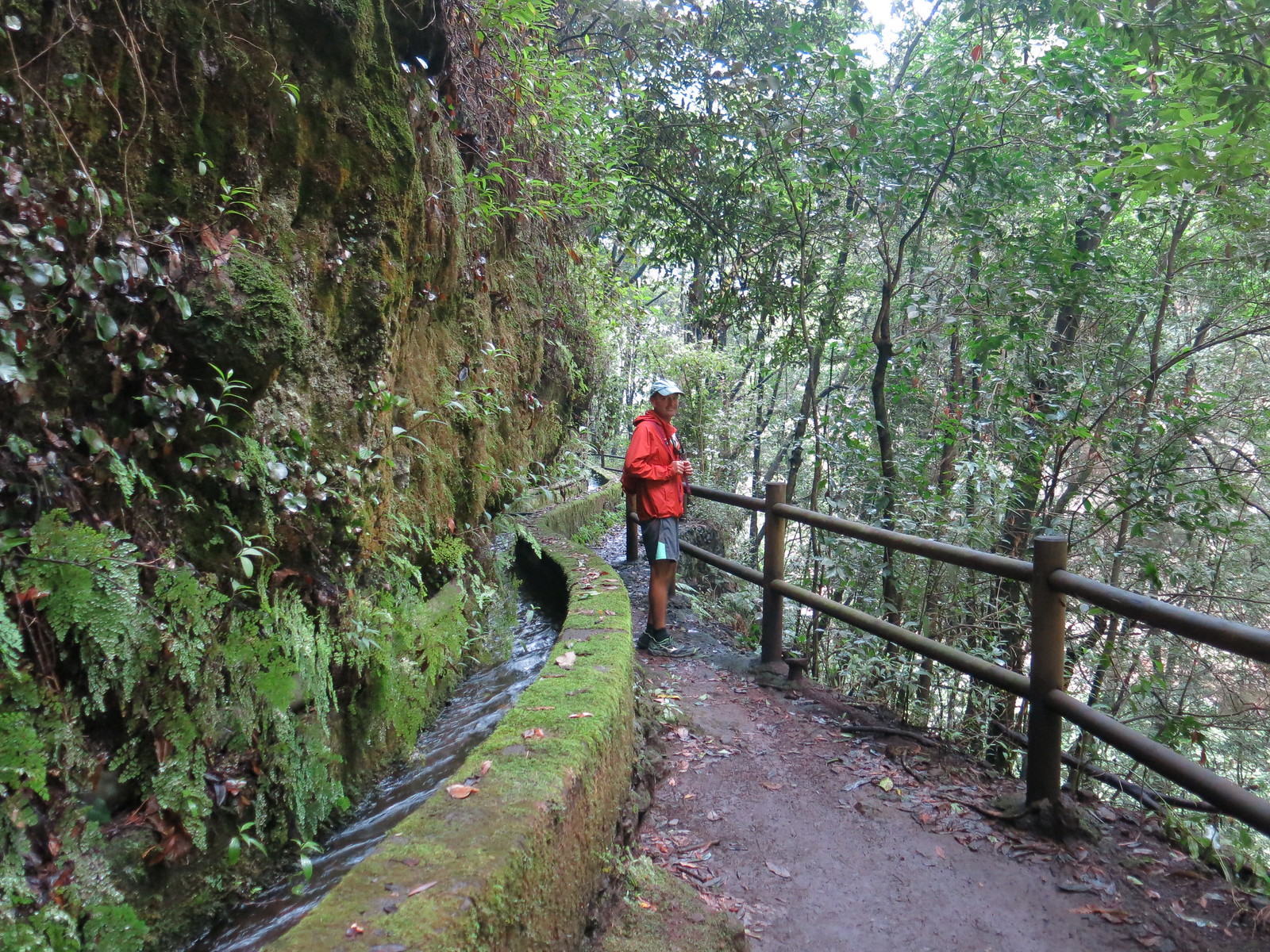 We spent a day exploring Los Tiles, a rainforest park on the northern part of the island. The moist NE trades hit the mountains, get held up there and dump their water continuously on the forest, which grows so thick the understory never sees the sun. From here, there is good water and we hiked along old paths that carried the water down to the banana plantations below. La Palma is serious about bananas. One day when we were walking by a packing house, a man called me over to give me a few bunches. Now they are ripening on our stern. They also grow avocados here and they are delicious. 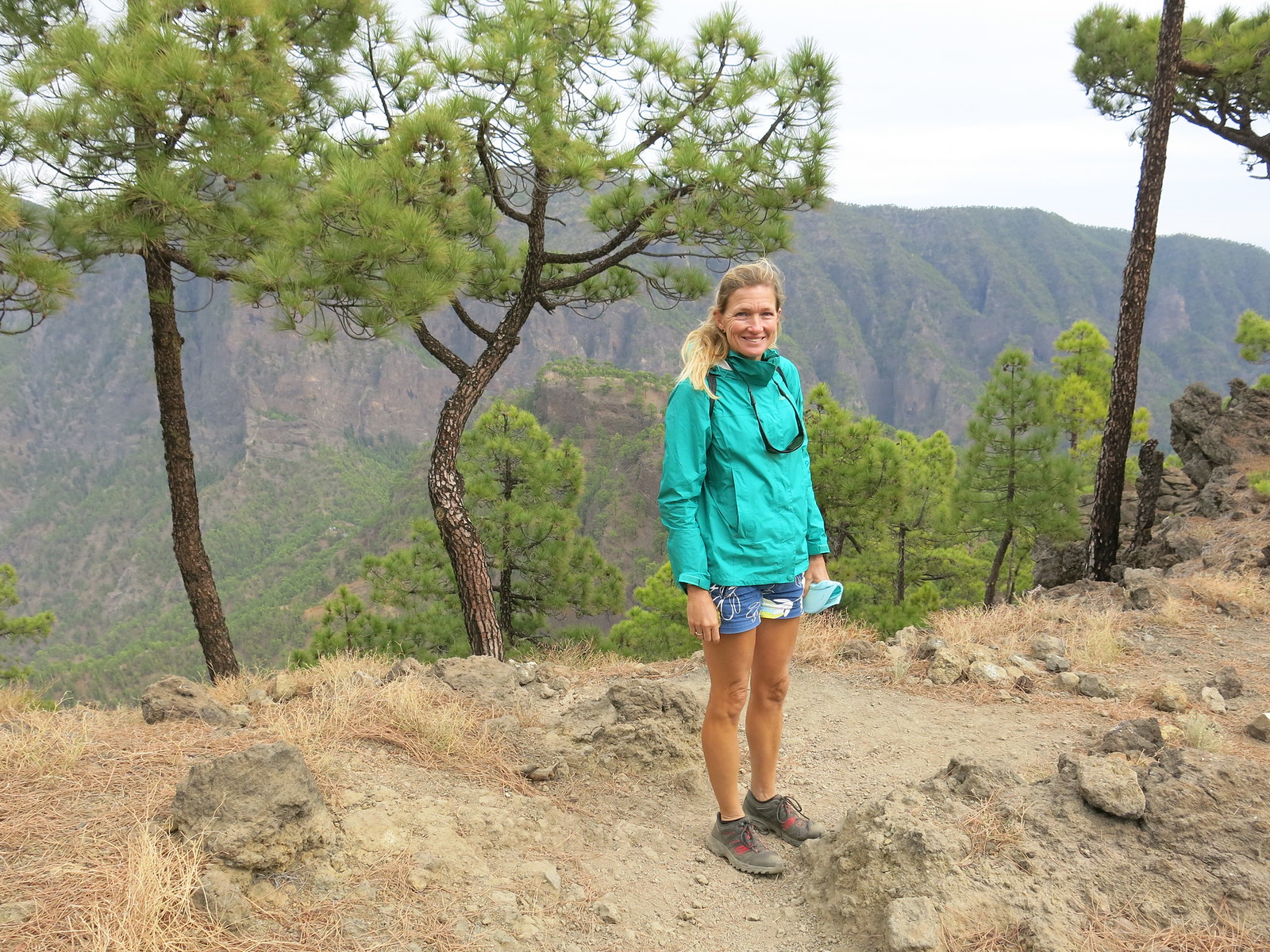 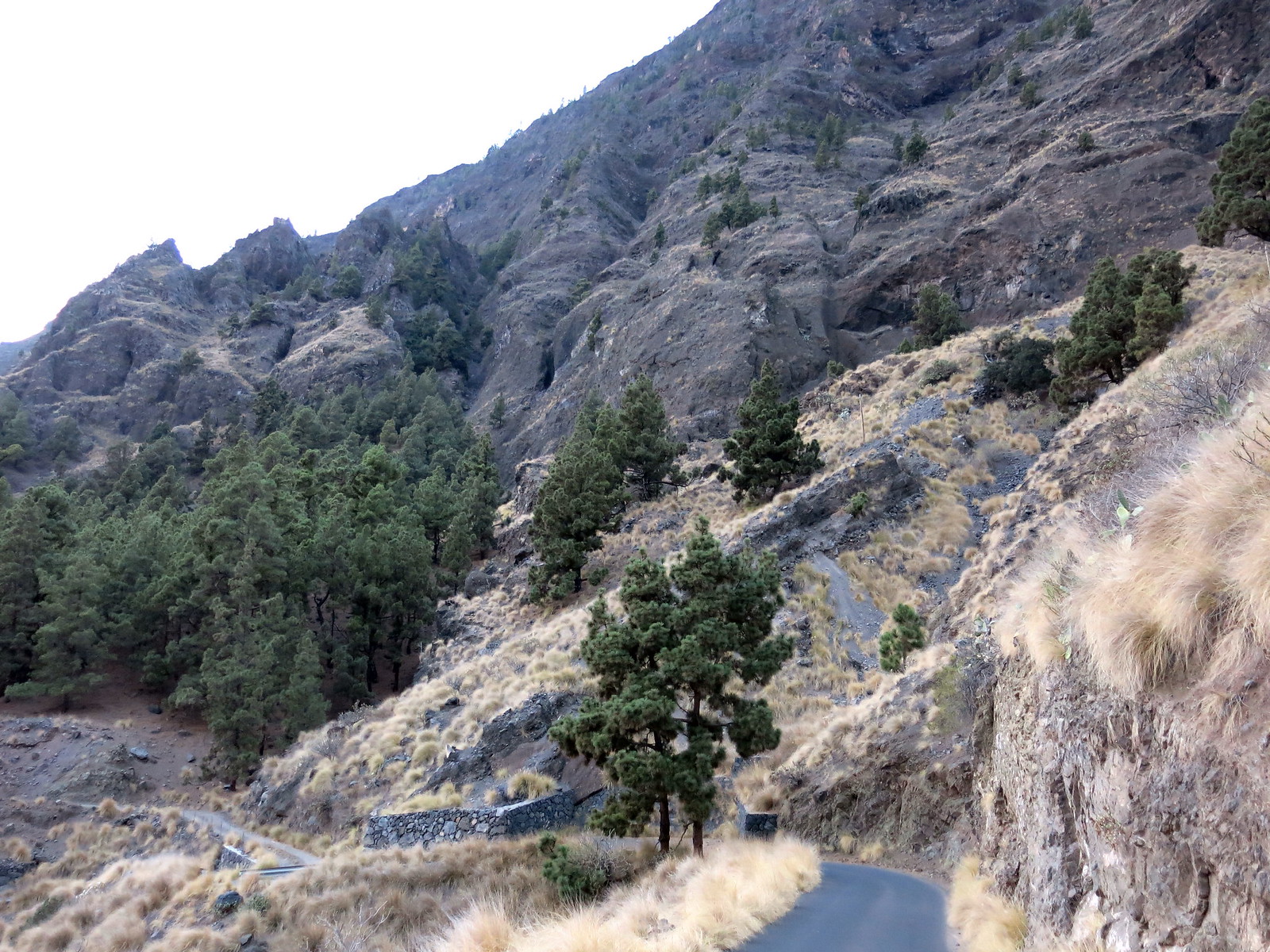 We did some amazing hiking in the national park La Caldera de Taburiente. It has significant mountains surrounding a huge caldera 8km wide. You can hike along the rim, or down into the eroded center way below but on the day we had planned this great trip where we were going to leave the car on top, bike down 15k to the base of the canyon and then hike back up, they closed the canyon because there was a chance of rain in which case it wouldn't be safe. I was so bummed out but hikers have died in the canyon from flash floods. But anyway, in the morning you can be on a beautiful Canary Pine filled mountainside and an hour of driving later you can be walking through a moonscape to a lighthouse with the ground warm under your feet from all the volcanic activity. And I'm not sure how they do it, but bananas grow well here all along the shore too in the old lava flows. 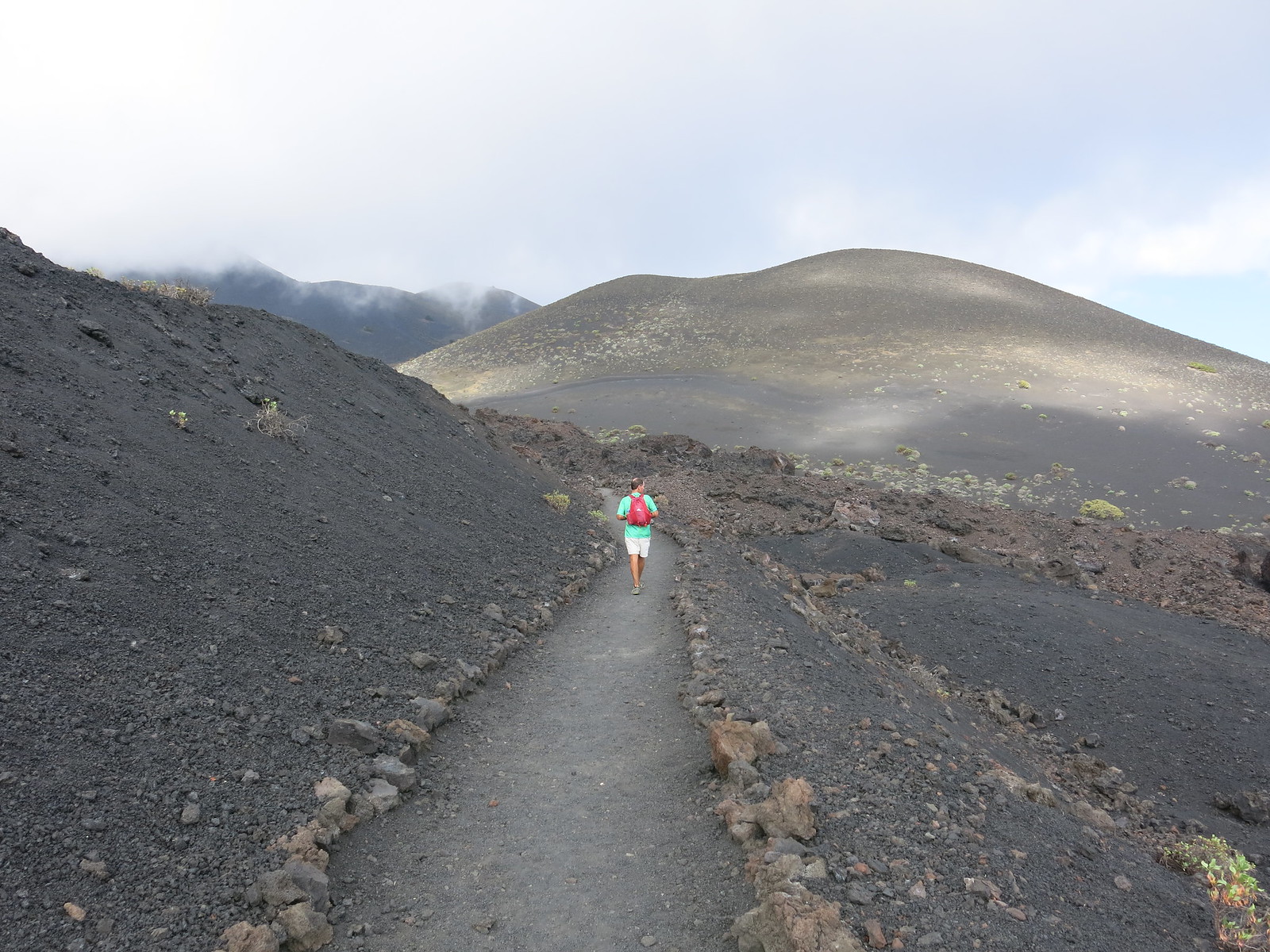 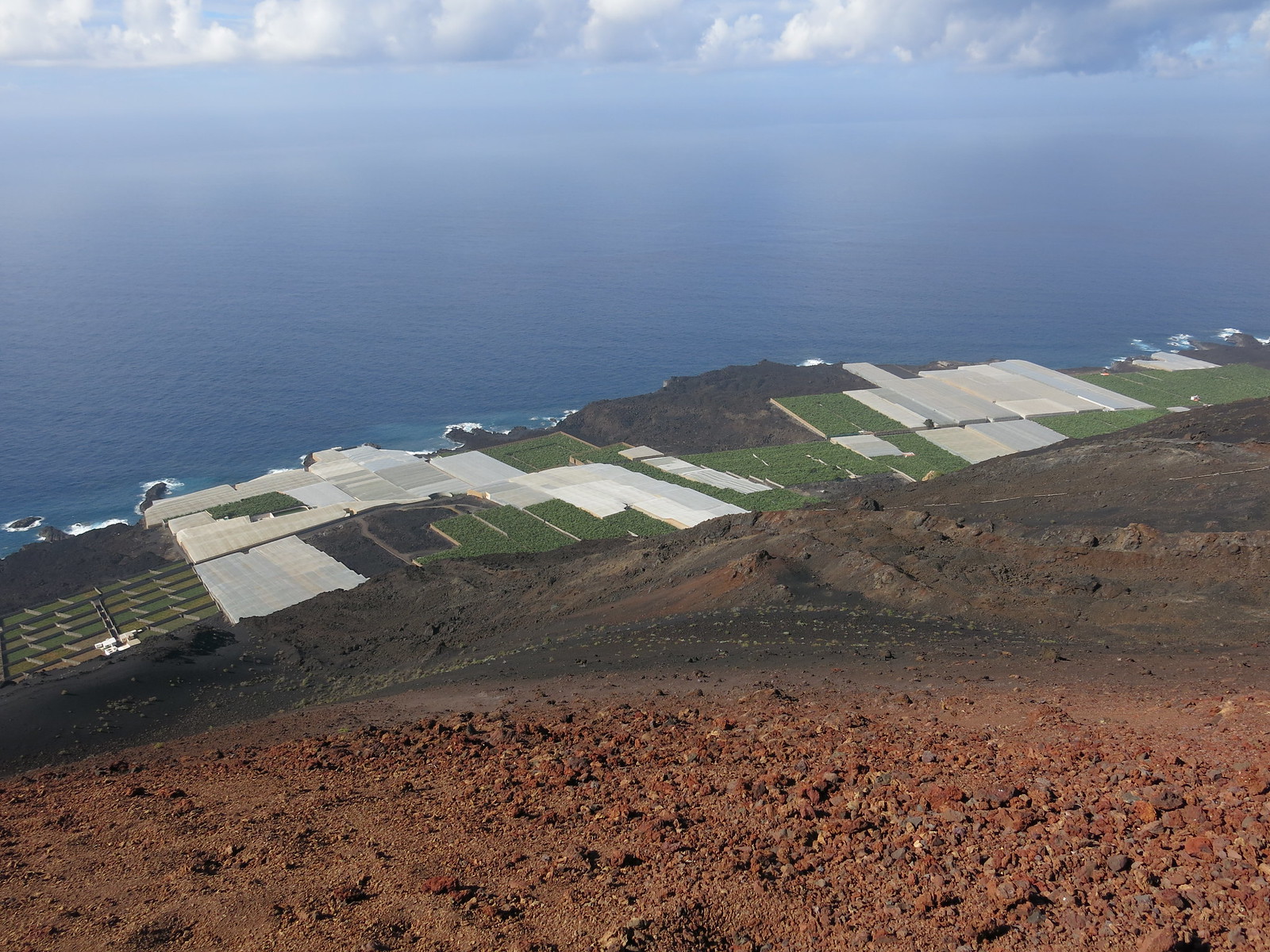 On the highest point of the island there is a starlight reserve. Situated way out to sea and with 1/3 of the island set aside as park, this is a world class place to observe the stars. Something like 18 countries have their telescopes here and the Grand Telescopio Canario is one of the world's largest. You can drive around the area looking at many of them which was very interesting. 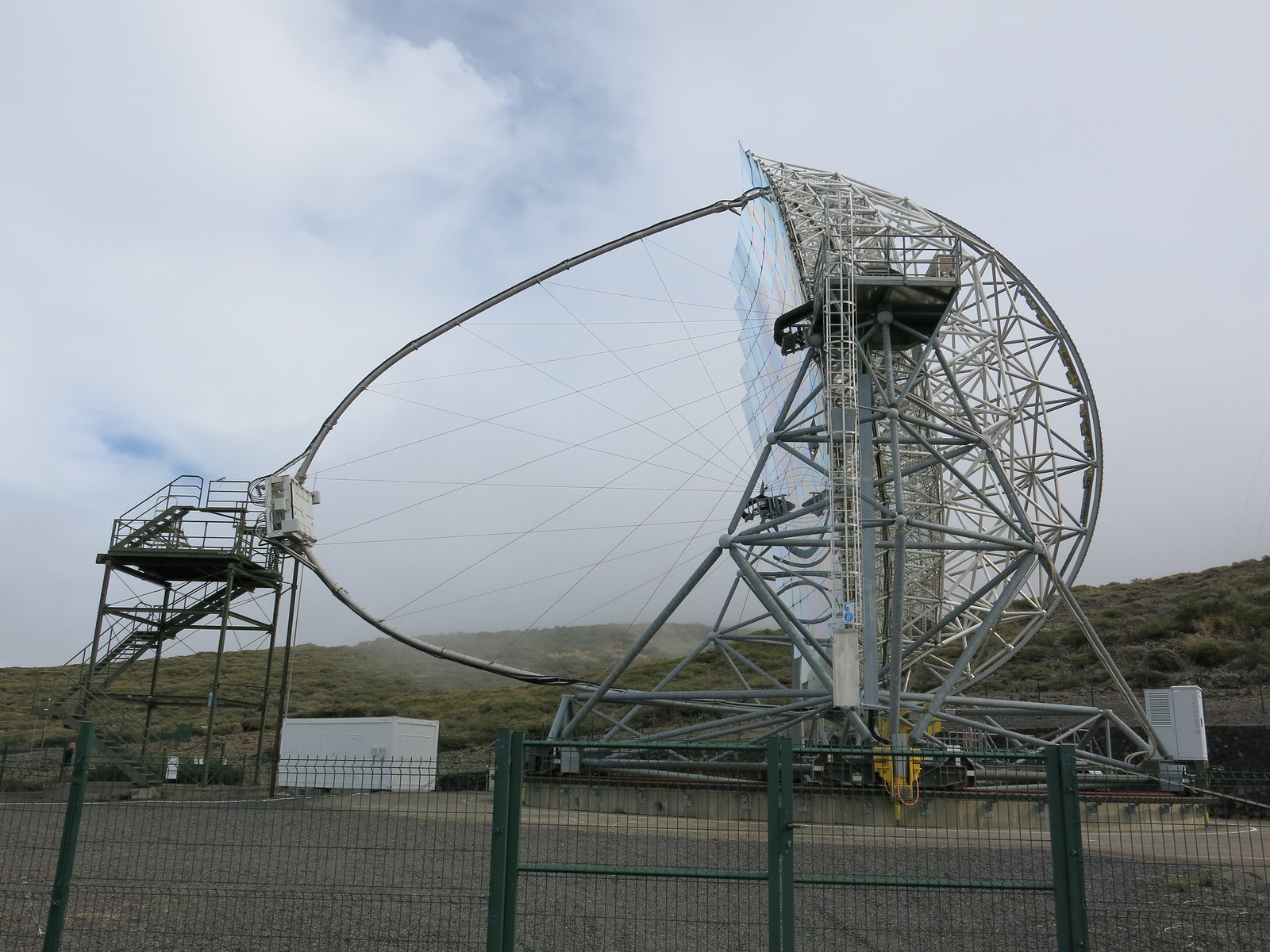 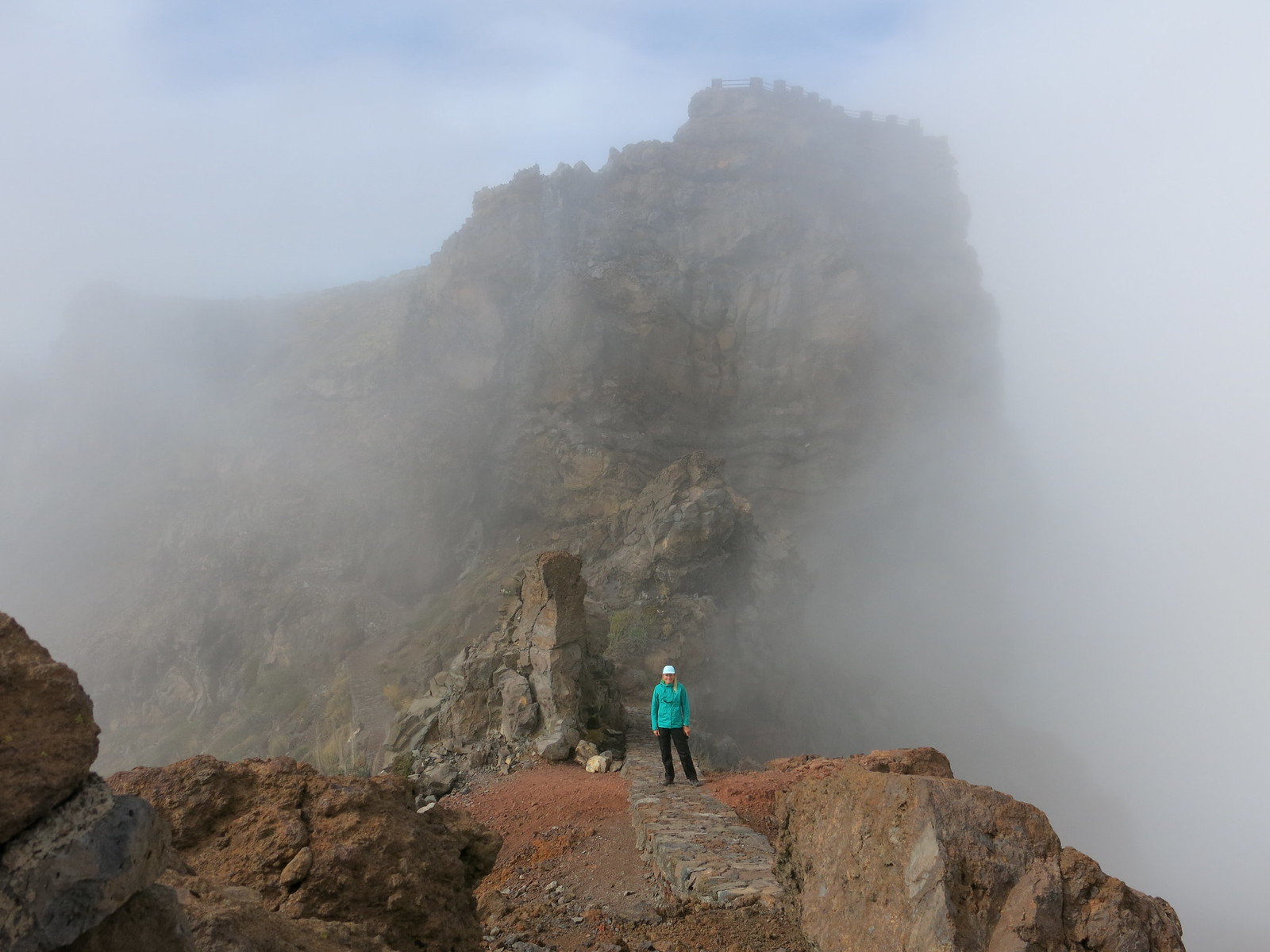 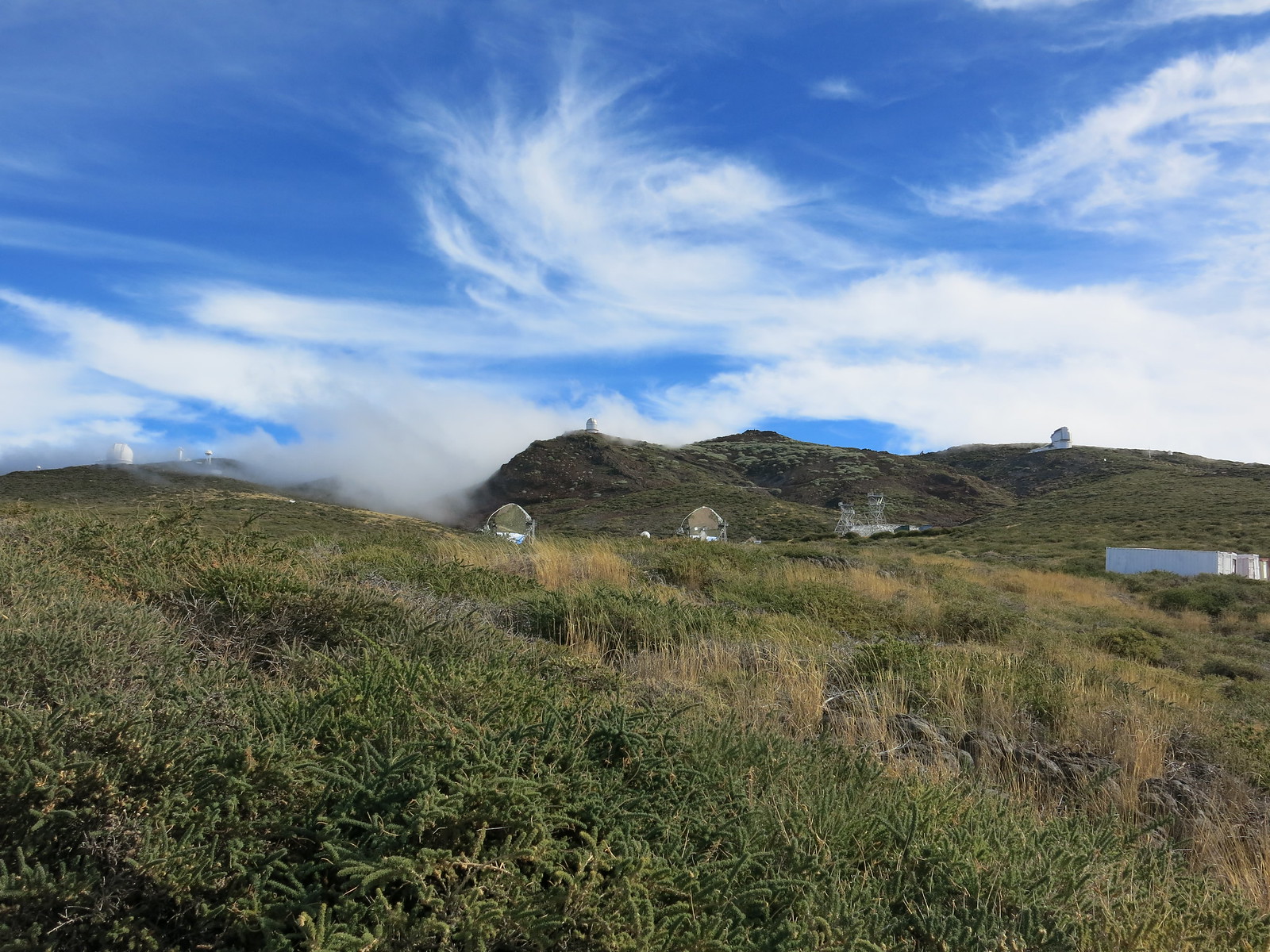 At times we hiked in the clouds, at others, by the colorful sea. I love the foliage, the birds, the way the clouds make pretty patterns in the sky. This island is gorgeous, and filled with friendly people. They've made us bocadillas (typical Spanish sandwich) to eat at viewpoints, local meat filled potato pockets to eat in squares and even dinner a few nights ago with some new friends in an historic building used by the Masons called the Investigator's Club. The food was just OK but the uniqueness of the place and company of new friends made it special. It has been a fun week. 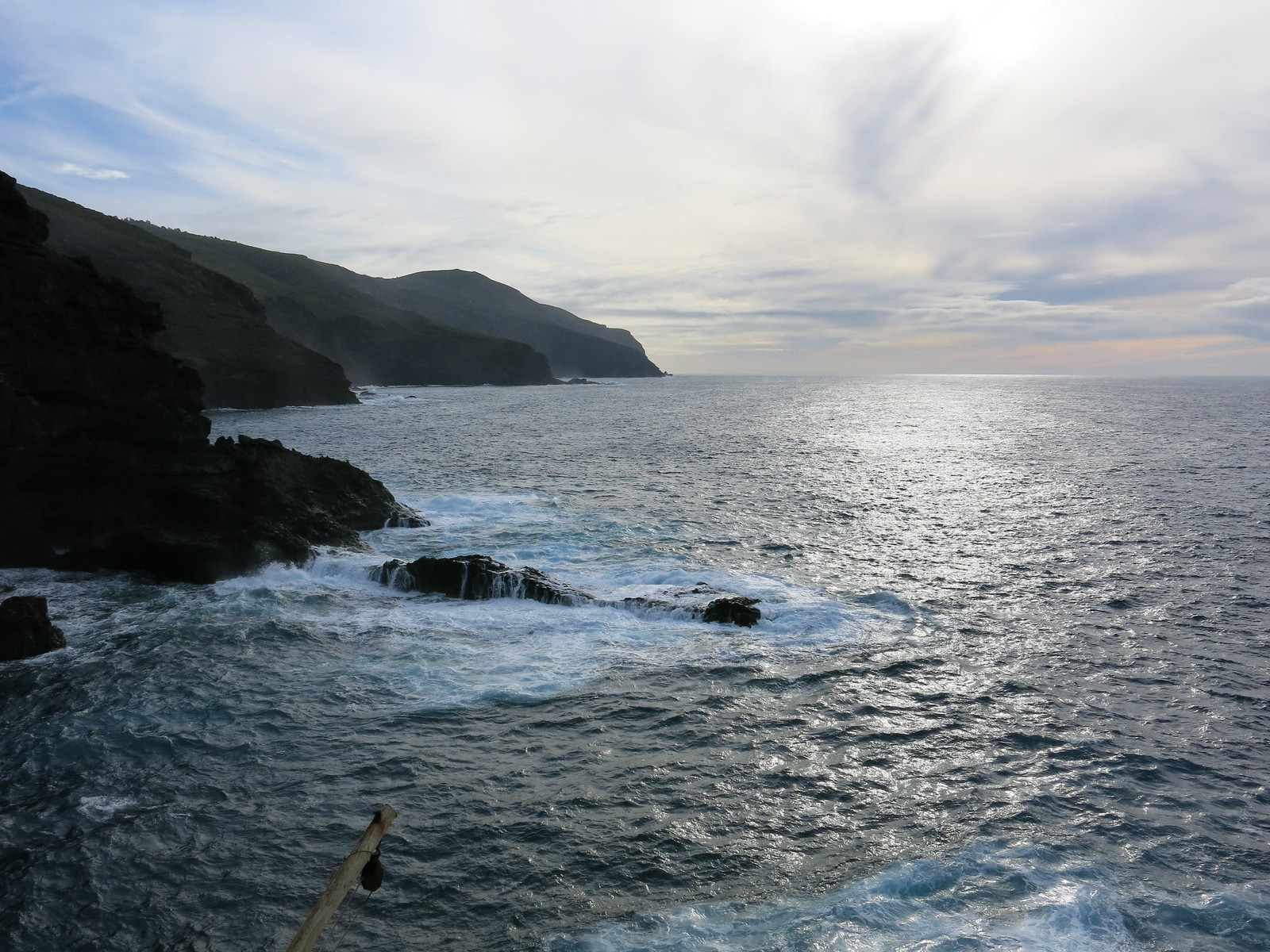 Jon is getting used to his new Spanish keyboard although he occasionally asks me where such and such a key is. We had a boisterous sail back over to Tenerife today to pick up some mail in the city tomorrow and then we'll head to La Gomera. We've both got blisters and I'm down a toenail but our muscles are growing and we're enjoying a 4th meal a day- foursies, which we'll have to stop once this smorgasbord of hiking finally comes to an end. It'll be a sad day for sure! 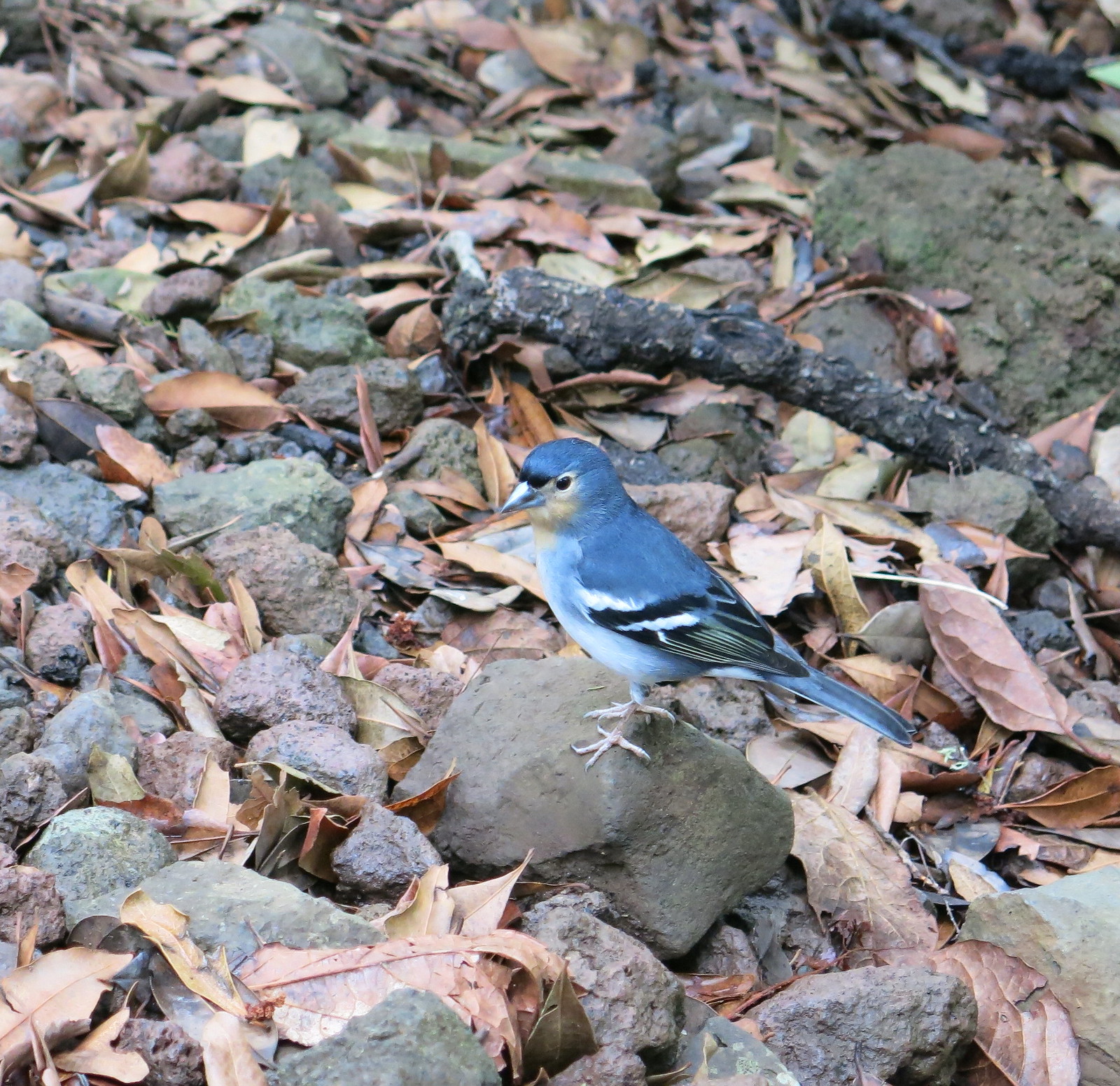