While we won't cross our outgoing track until we get to the Bahamas, it feels like in many ways our round the world trip is completed because we are back in familiar territory. We cruised the E. Caribbean islands in 2003 and surprisingly, not much has changed, at least in Martinique.

People often ask us what our favorite places have been on this trip and they are usually met with a blank stare from us. It's because it's hard to pick a favorite when there have been so many wonderful experiences & fantastic people that made them come to life. And each place has delivered something unique that has contributed to a collection of great memories. But here are a few things that stick out in our minds and some pics to go with them. 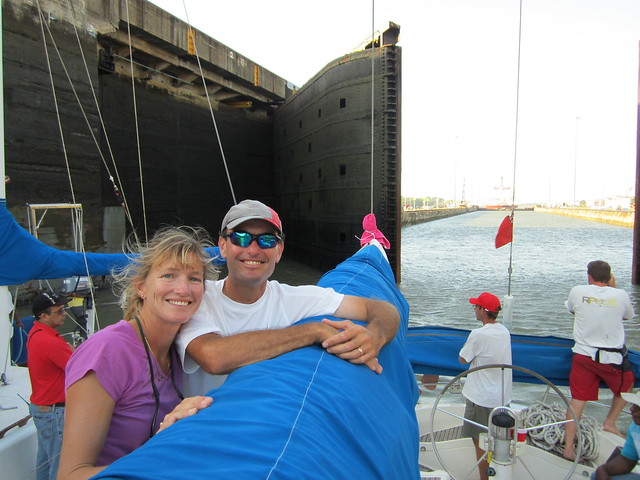 Transiting the Panama Canal was a milestone and exciting because the Pacific Ocean opened up to us for the first time, not to mention the canal itself, which is a marvel of engineering. We passed through it 3 times, first on someone else's boat to help them and figure out how it all works, then ourselves on our own boat and then we helped our friends Tim & Nathan on Slick. 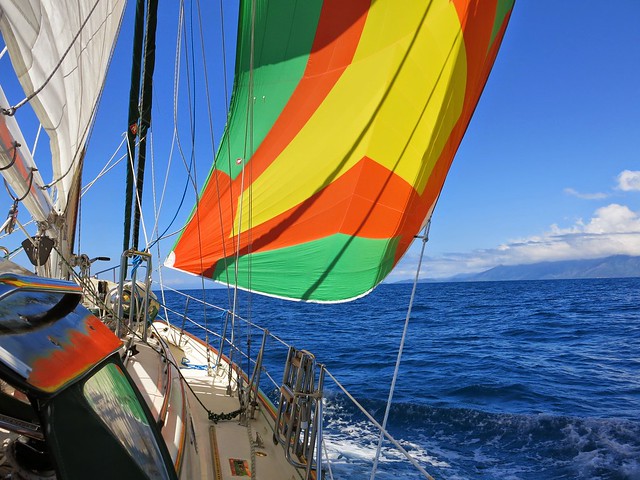 We have really done some amazing sailing over these years. Heading westward, with the wind mostly at your back, sliding down waves on a sleigh ride or blasting along behind the reef or in the lee is a big buzz. Needless to say, we learned how to sail our boat well! While we did get restless on long passages, there are parts about passagemaking that are unforgettable, like crossing the Banda Sea in Indonesia where the sea glows green in a display of phosphorescence unique to that part of the world. Or crossing the lonely parts of the Atlantic or Pacific where you see nothing for days on end but blue, not even a speck of trash. It was as reassuring as it was lonely. We depended on each other and our boat, a good trio.

Making landfall in so many beautiful places was always exciting and much more rewarding than arriving by plane. It felt more like we'd earned it. And while cruising Europe, where technically we could only stay for 90 days out of every 180 as a US citizen, we never got more than a wrist slap because we were traveling by boat. They know you can't get anywhere fast! Our most memorable landfall was the Marquesas. After 21 days at sea, to arrive in a packed anchorage and be brought fresh pamplemousse by fellow cruisers in a backdrop of beautiful spires of rock, that is paradise. 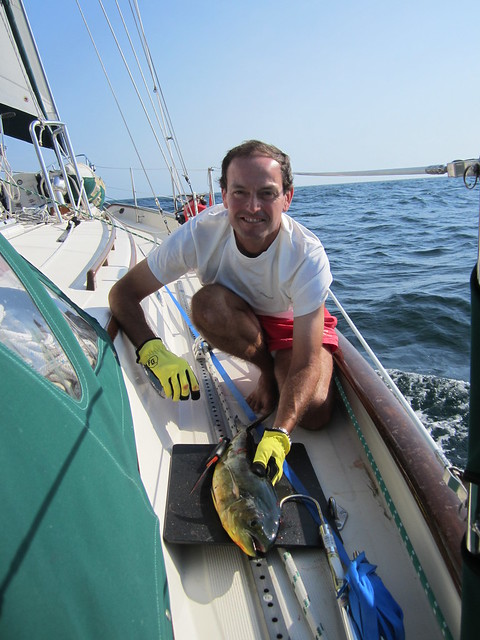 We did some great fishing underway with Vanuatu being the most fruitful for us. Because the islanders love to use the fish head & bones for stew and they can't get out to sea to catch pelagic fish, we felt like superstars giving them those parts of the fish we caught. You didn't have the feeling like you were getting the last fish either. This photo is of a smaller fish but I like this pic of Jon. 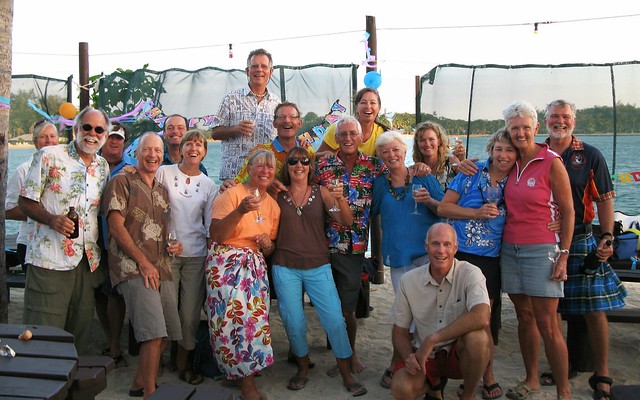 The cruising scene crossing the Pacific and the Indonesia Rally were the richest we've ever known and we made a lot of wonderful friends. Even doing mundane things like checking in & out of places was made fun by doing it together. And then there were birthdays.... Some people even wore their kilts to these events! 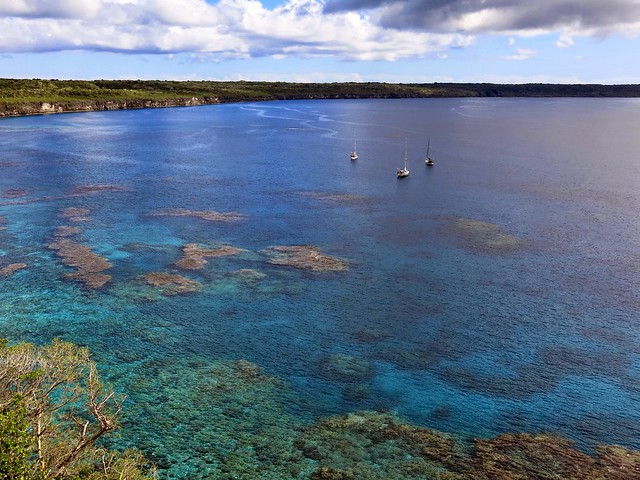 Sharing anchorages together in really pretty spots was the norm. I liked the way all the boats leap frogged so you would say goodbye only to meet up again down the road at another island to pick up where you left off. 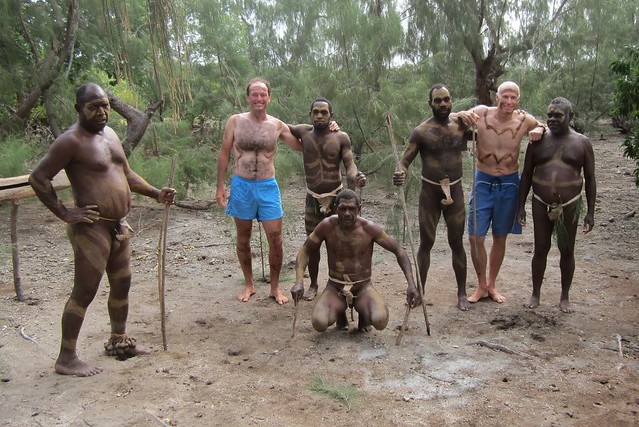 We enjoyed getting to know all the different cultures in the places we sailed to. While we didn't always understand what makes people do what they do, it was interesting to dive into it and live it a little. If it was overwhelming, it was especially nice to come back to the boat at the end of the day (we called it "the oasis") and let it all sink in. We loved the jovial spirit of the Spanish and the sense of humor of the Australians and we were most moved by the people we met in the smaller nations. 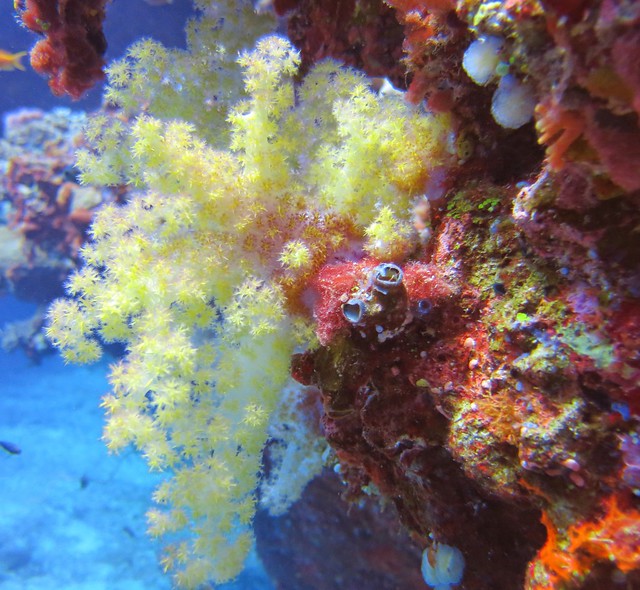 The diving! We did as much as we could and saw some incredible reef. From wrecks to canyons, walls, overhangs and passes, we saw a lot of beautiful creatures. Having our own compressor aboard made us independent, which is how we like to be. Indonesia had the most interesting muck diving and Vanuatu & Fiji the most colorful corals. We got addicted to finding nudibranchs too. They are like finding a piece of candy to me. We dove or snorkeled with mantas, sea lions, sharks, turtles, dugongs, rays and all the other usual suspects. It was great to sit down at happy hour with our dive buddies and look at our pics if we'd had a particularly good day. 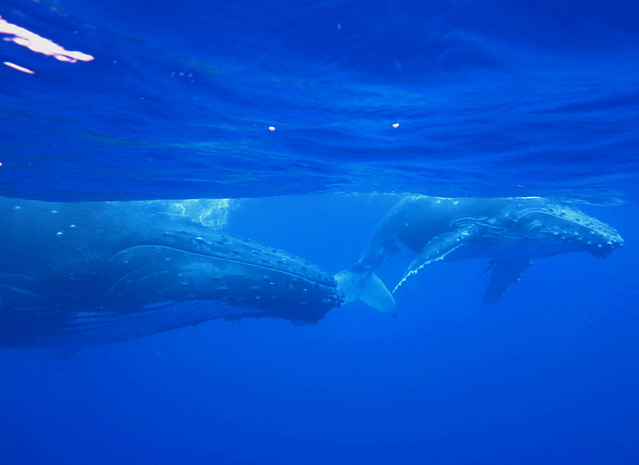 Snorkeling with humpbacks in Tonga was a highlight and I will never forget diving on a reef the day after and hearing their distant song at depth. It's a sweet song and it felt good to know they were nearby. It's the kind of beautiful that makes me sad. 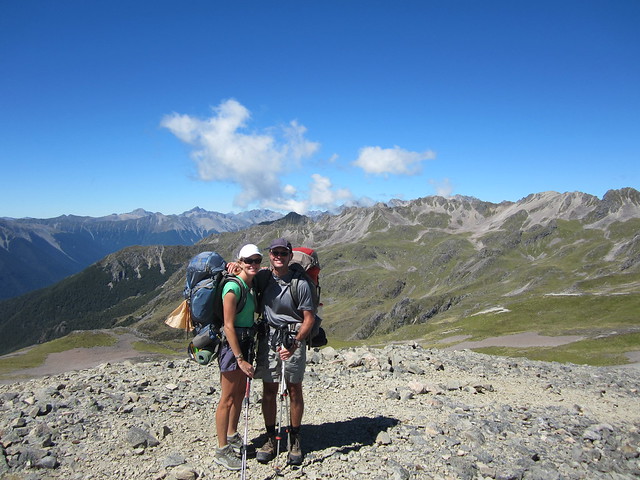 We hiked miles and miles and miles all over, and when we could, we got our packs out and went backpacking. Tasmania, New Zealand and Nepal have some standout beautiful spots and we hope to get back to each of them to do more. 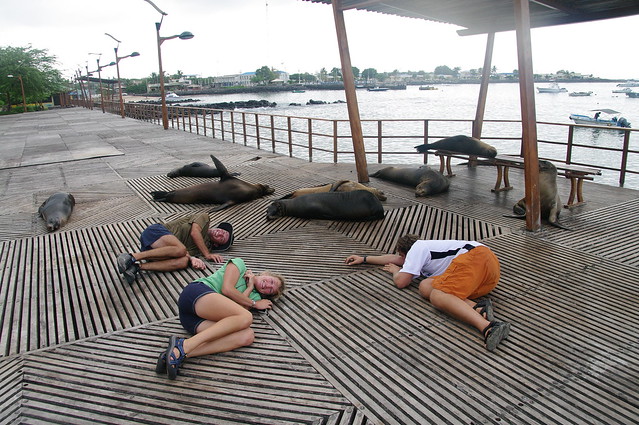 We enjoyed seeing all the diversity of wildlife and their forested or pastureland homes. Australia blew us away and we saw more snakes than probably most Australians do because we were on the trails so much! Pulling in to Bundaberg and seeing kangaroos right as we stepped off the dock was just the start of many months of seeing crazy things. From wombats to kookaburras, koalas, Tasmanian devils, platypus, echidnas, dingos, wallabies- it goes on & on. It was definitely the biggest smorgasbord we've seen. We enjoyed the sea lions in the Galapagos too! 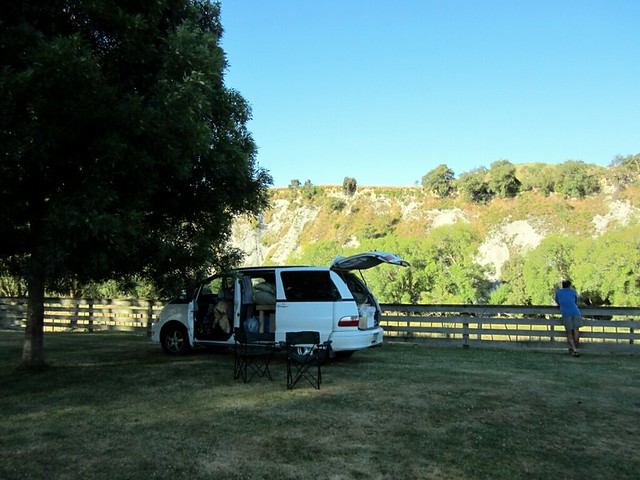 Living in a van for 2 months touring New Zealand wasn't always the easiest and we practically suffocated under the weight of all the blankets we had to try to stay warm but it planted a seed for worldwide overland RV travel that has stuck with us and grown. We were envious of those who were self contained and could stay overnight in the beautiful places that we had to leave at the end of the day to get to a campground. Not next time! 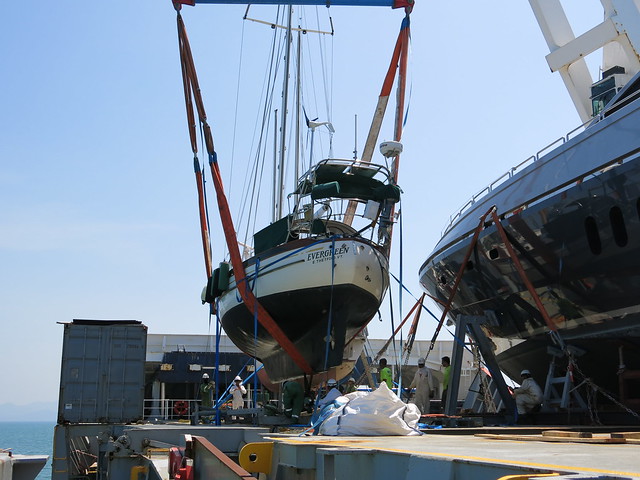 When we were in SE Asia we got a serious hankering to shake things up and see something completely different... so we decided to ship Evergreen to the Med. It was a big decision. We took the boat up to the ship in Phuket, and Peters & May expertly loaded it on and we then visited Nepal & the Taj Majal in India while it was in transit before meeting up with it again in Greece, just outside Athens. I'll never forget the day we got our home back and were walking around an ancient amphitheater looking out to the ship that carried our boat so far to a whole new world. We both feel it was one of the best decisions we've ever made. 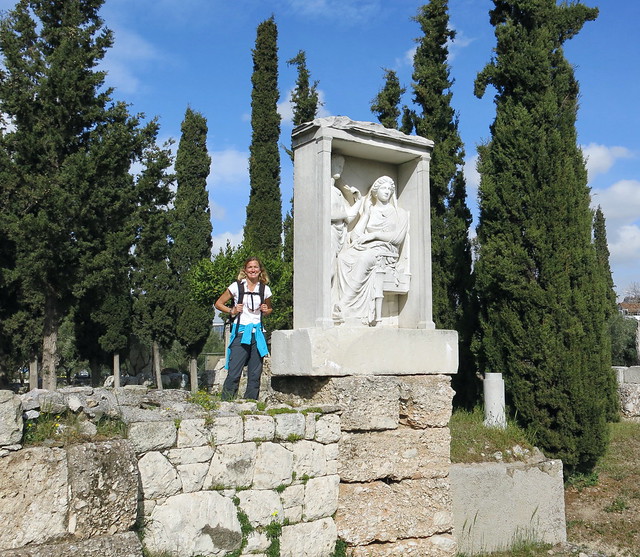 Exploring all the ancient history and mix of cultures in Europe was fantastic. All the stuff that I learned and then forgot in high school I re-learned again first hand. It means a lot more now! There's no shortage of intellectual things to do in the Med which helps make up for the lack of diving or decent fishing. We ate like kings and having our home with us was great. We couldn't get enough of exploring the old cities and Jon especially wished he'd had more time in Greece to find more ancient harbors and park in them for a bit. Unique for sure. I wish the US had these old treasures. 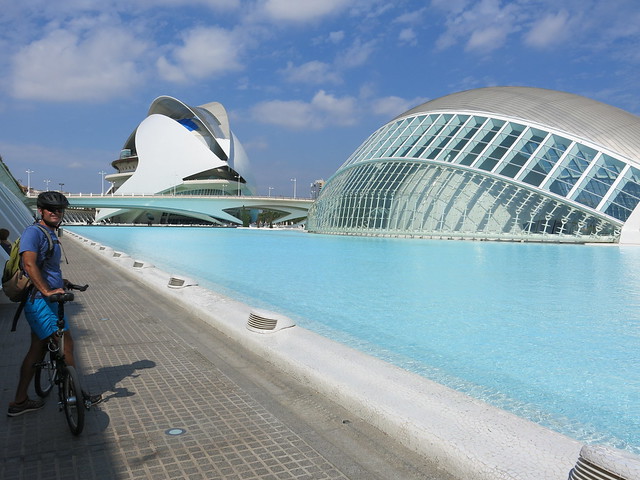 Deciding to spend the winter in Spain was another highlight. We weren't expecting to fall in love with Valencia but once we got there it seemed like everything fell into place and we both were so excited to be there. But the time flew! Staying there allowed us to travel around in Europe over the winter when flights were cheap and explore without worrying about the boat because it was snug for the winter. We biked all over the city and really had time to get to know it well. It planted another seed that we'd like to do that again someday, just move in to places for a bit and stay awhile. For example, I could hardly drag Jon away from Mont St Michel in Normandy, France. We found there was something for every budget in Europe and we had a blast. Who would've thought we'd end up spending over a year in Spain?

We often joke around about where we have to go back to to get our favorite such and such, like back to Kiwi land for their meat pies, back to Greece for gyros & tomatoes, Italy for pizza (of course!), Indonesia for char kway teow, Malaysia for coconut milkshakes, NZ for canned tuna, Spain for the menu del dia & wine, French Poly for pamplemousse, Nepal for fake North Face hiking gear, England for decent bread & cereal, Fiji for kava.. well maybe not!

And we did some other memorable things like run/swim an impromptu duathlon in Samoa, part the sharks hanging out in the pass at Fakarava, bike around the backside of the Tanna volcano to visit the village on the other side where the ash falls like rain (hard on the lungs!), get stuck in the medina in Marrakesh in our rental car, get ciguatera for the second time in the Bahamas, Jon crewed in a traditional Bahamian sailboat race for a day, we biked through downtown Paris practically by ourselves on an early Sunday morning, took an all day horseback ride in the mountains of Panama with a great guide (we were his first customers) then stopped at a bar and tied our horses up, had a couple of beers and then got back on and rode back to the barn. There were many others I can't think of at the moment but they pop up every so often and give us a chuckle. 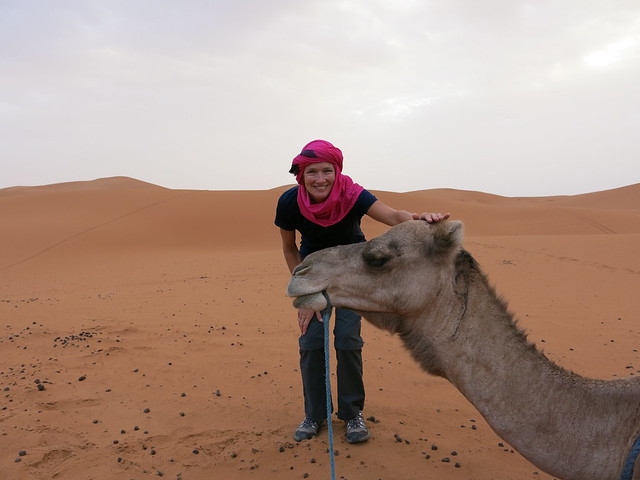 Each country we visited broadened our thinking a little more. We loved seeing all the beauty in the people, the things they've built, the wildlife, plants and underwater world. We learned that there are many ways to get through this life, that everything is just trying to live and no one way is right or wrong. It is just different. We've become more understanding of those differences and are almost addicted to experiencing them. We're thankful to have had the opportunity to do & see all that we have. And we plan to continue building on what we've done. To everyone who was a part of this chapter, thanks for the great memories! It wouldn't have been the same without you. 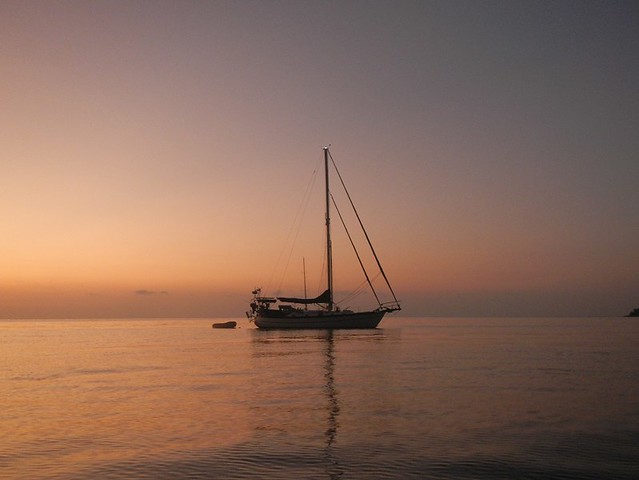