After a 5 day trip in the boat from Vero Beach up to Green Cove Springs, FL we arrived and saw for the first time where we've "lived" since 2007. Our mailing service, St Brendan's Isle is here, and since our sailing home moves everywhere we go, we use this as our permanent address. Although its been good to do this initial work on the truck here and be able to pick up our mail in person once or twice, it will be fine with us to leave soon as it feels sort of claustrophobic being 40 miles up a river and also this area just isn't for us. Can't say enough good about St Brendan's mail service though! 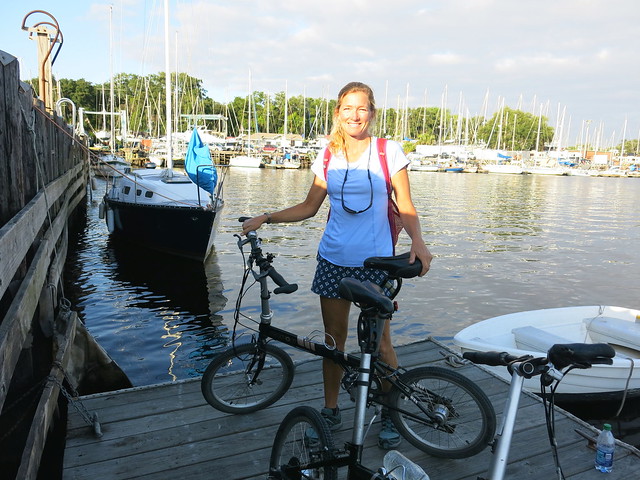 On May 3rd, we biked to Enterprise in town, picked up a car rental, drove to the port of Brunswick, GA and picked up the truck. I had to wait outside the gate as only the driver is permitted inside the secured area. In about 30 minutes and after a $50 bill was handed to the escort (usual policy in union covered ports when picking up vehicles) our truck was finally in our possession. We used Dan Ozdinec from All Ways International Shipping out of Baltimore to arrange all the shipping from Norway to Georgia and he was great to work with. Turns out it WAS as easy as shipping the boat but a lot less expensive! It is OK to import a truck not originally sold in the US as long as it's 25 years old. And because we purchased a fire service truck, the USA doesn't assess the 25% duty as they ordinarily would. We knew this ahead of time which is one reason why we zeroed in on a fire truck, well that and they are generally stored inside at the fire station and well cared for. 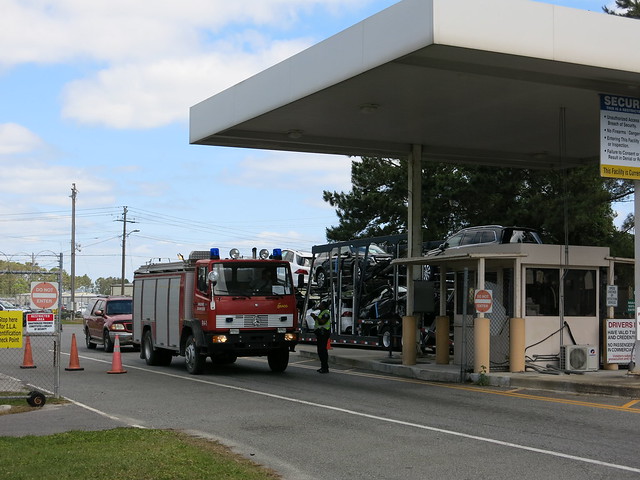 We drove it back to Green Cove Springs Marina where we'd already arranged a trade with the welder there. He could have the firebox which he wanted to use as a storage shed as long as he removed it for us. Along with an extremely heavy duty water pump and a big tank to carry the water, it has nice several spacious lockers with roll up doors. We really wanted to get it off ASAP so we could see the chassis and get things ready to have the subframe built. We spent the weekend pulling off vinyl letters and stickers, getting to know the truck a little, and Jon disconnected a myriad of wires, hoses & fittings that ran from the truck cab to the firebox along with 4 blue lights and several floodlights. Who would've known how much interest there would be from anyone passing by not only about this project, but in the blue lights themselves. During the drive back from the port, Jon said that the truck felt a little swervy at times especially when going over bumpy bridges or the like. Then we discovered that the water tank in the truck was full of Swedish water! We set the valve to drain and then went for a couple hour walk and when we returned there was still more water to come out. Interesting that they shipped it that way...

It took the guys all day Monday to remove the box but it eventually got done. The chassis looked really good, very little rust and we found that the truck had been undercoated with an oily protector and so for better or worse, we'll have to get that off entirely in order to paint the chassis. We both spent some time scraping in subsequent days to remove some of it. We've got more to do. It may be that we get the chassis sand blasted right before we paint but we've decided to hold on this till we get up to VT. The whole next day was spent pressure washing the chassis. 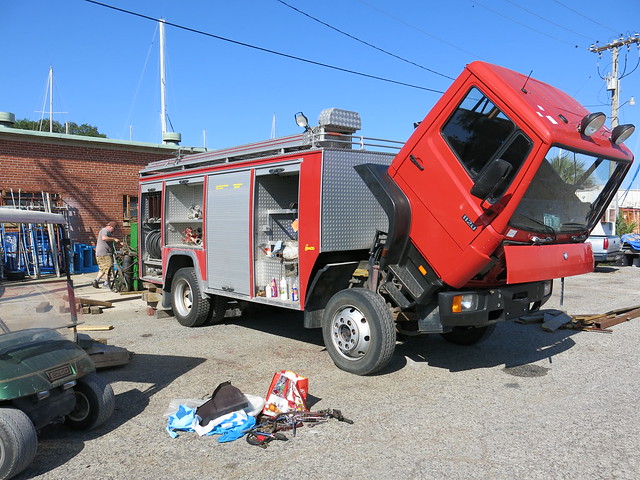 We ordered up some key blanks since we only got one key with the truck. And we've also ordered new rims from a company in Germany since our truck has an 8 lug pattern rather than the usual 10 and you can't get these in the USA unless they're custom made. We'll use Dan as our agent again. With the RV conversion we'll only need 4 tires rather than the dual rear tires and they'll be larger & taller on/off road tires that will give us better fuel mileage and speed than what we're doing currently with studs on the front! 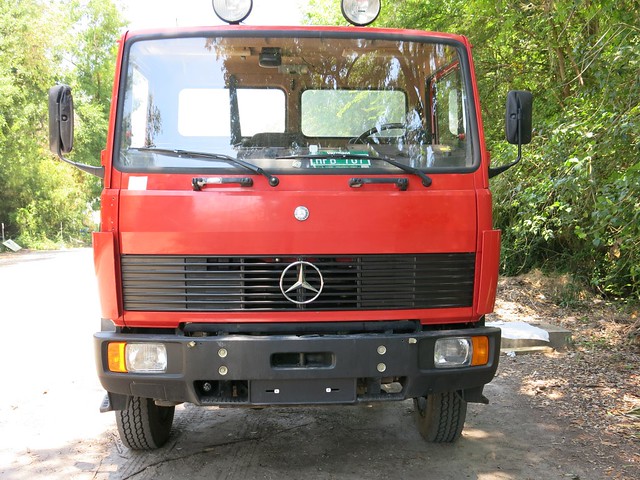 The Total Composites fiberglass box that will be the actual camper box comes in white both inside & out. It's shiny gelcoat actually which is just like the boat and so we're not planning to paint it. So our color scheme is going to be white with black or dark gray trim and underbody boxes. While not our favorite colors it should really help keep the box cooler and we can get on the road sooner. We'll prep & paint the truck cab white also. The front grill of the truck was cracked and needed repair, plus it was white so we took that off and fixed it, then painted it black and put it back on. It felt good to get something small done.

Then we took a much needed break and played for a couple of days- visiting Fort Caroline in Jacksonville which has great trails and interesting history and St Augustine, before heading down to Vero Beach where we are now, having the subframe built. We made decent progress over the past week and a half although we can't wait to redo the inside of the truck cab and get AC installed as it is loud and hot with the windows down. We won't start that till we get to Vermont though. 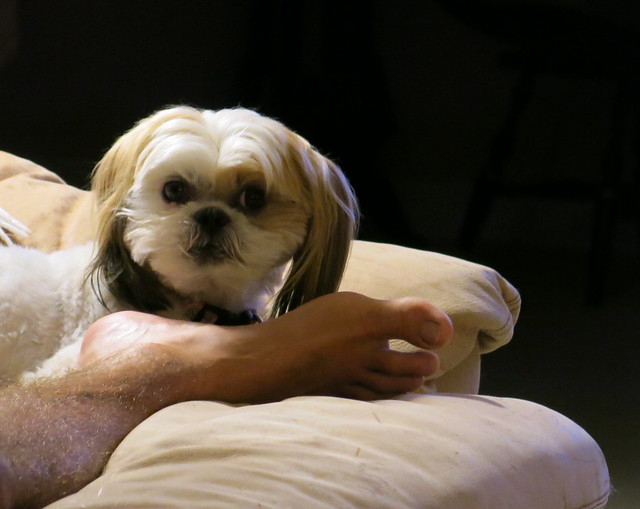