Ready to Get Away! Things are lacking right now in the fun department but we're slowly making progress toward Vermont for the summer. Evergreen is hauled out at Hurricane Boatyard in rural N. Carolina and we are ready to head north in our truck but are waiting for word that the truck rims we ordered from Germany are available for pick-up from the port in Baltimore where they have arrived by ship. We're anxious to get going and have done all we can on the boat for now. We feel like the summer is flying by and before we know it we'll need to be back here to carry on with boat work. Meanwhile, we're anxious to resume the RV build. But we dug in our heels and stripped the whole bottom down to the barrier coat because all that New Zealand paint was not going to be compatible with anything in the US and it was never right from the beginning anyway. We both got rashes on our arms from getting the paint chips under our paint suits which meant we both spent a night awake scratching our itchy arms and hands. Not pleasant at all. But now it is done and after Jon gives it a good sand, the hull will be ready for a new paint job- in the fall. What a relief. In our downtime we've gotten in a few good walks through the flat farmlands of Bayboro and the birds are fantastic including the whippoorwills! We've met some nice folks here and note that this is an area where large, old cars with hood ornaments rule, Cadillac being the most popular. 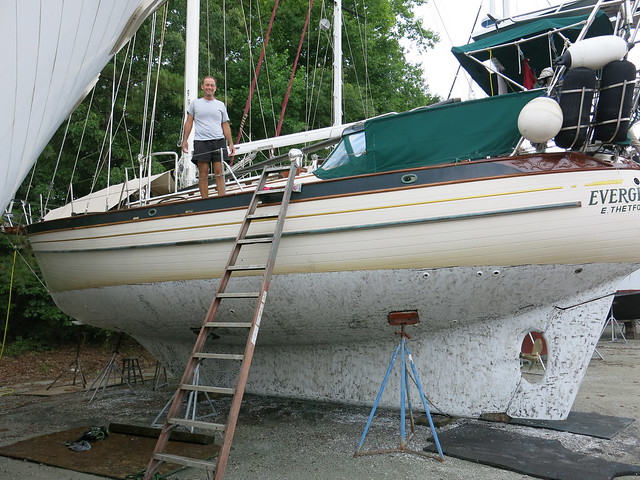 Backing up, we sailed out of St Mary's inlet on the Florida Georgia line and had a decent trip up to Beaufort that took 2 nights. After the first day the wind filled in for good and we sailed downwind wing & wing like Evergreen likes to do. Dolphin kept us company by day and the moon & stars by night. On the second night, we were 45 miles offshore and I had just started my 11p watch when I heard a pan-pan call on the VHF. Apparently, there were 3 fishermen who had taken to their liferaft when their boat sank. Then a conversation between the coast guard and a sailboat who thought they were near. Coordinates showed both he & we were near. There was nothing on our radar or AIS so I just kept listening. The people in the raft were using a sat phone to communicate with the coast guard and had activated their EPIRB. They were going to set off a flare. When they did it was directly in front of us! But I couldn't tell the distance. So I got Jon up and we kept sailing straight ahead scanning the water with binocs and looking for a raft. Shortly after we started seeing the mast of the sailboat ahead of us that was closing in on their position and he popped up on AIS but never radar. A single- hander, he located their strobe and went over to check if they were OK just as we arrived at the scene. By then a rescue helicopter came to hover over us as well and sent a diver in to rescue the 3 men. A cargo ship also diverted and stood off nearby to help if needed. It all happened really fast! So we never had to do anything other than change course so we wouldn't run over the operation! And the single hander on the other sailboat never had to orchestrate a rescue from the water either thank goodness. After the helicopter plucked them out of the water and buzzed off, we were all given the go ahead to leave the scene, the liferaft left there with no one in it anymore, its strobe still flashing. I don't think anyone was coming for it.... Jon went back to bed and for a few miles after we sailed through the debris from the sinking and I could smell fuel on the water but couldn't see much in the darkness. Creepy! There was never an explanation for why the sinking occurred but they sure were well prepared for rescue... the coast guard said it took the "search" out of search & rescue. Doesn't hurt it only happened 45 miles offshore either. Anyway, my watch went fast that night with all the distraction and the rest of the trip was uneventful, just great sailing. 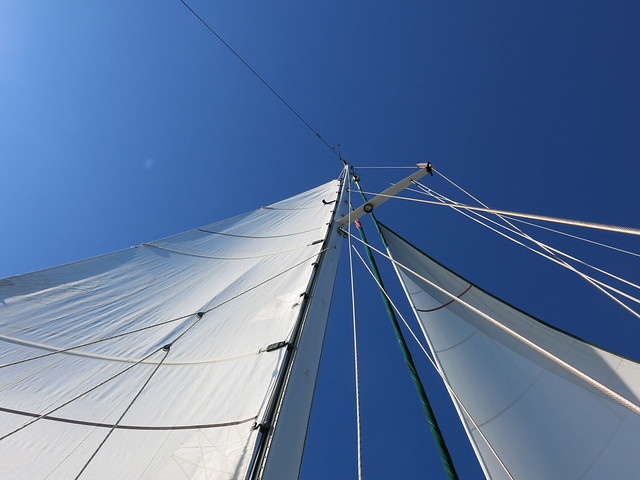 We pulled in to Beaufort, NC at sunset and tried to anchor off the town but there wasn't any space so we moved a little ways away and anchored off Fort Macon state park. Beaufort has changed my gosh! From the water it is a wall of fiberglass from megayachts that consume the docks. You can hardly see the town. I remember staging here at Beaufort Docks back in 2003 for our first ever offshore passage to the E Caribbean. We linked up with 3 other cruising boats to do the trip, one of whom was Ron & Nancy on Always Saturday. We would meet them again in I think it was 2014 in New Zealand. We had lost touch over the years and just like cruising couples do, they eventually wash up again on a distant shore somewhere. Funny how that works. 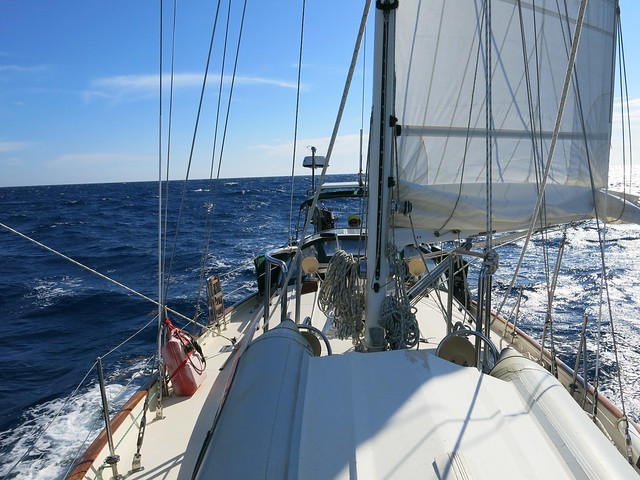 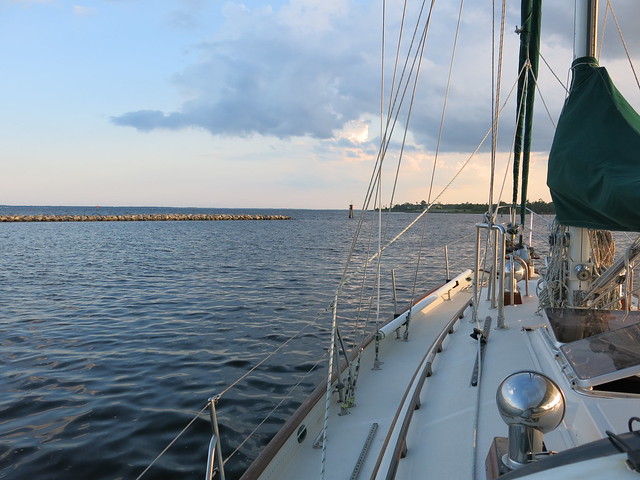 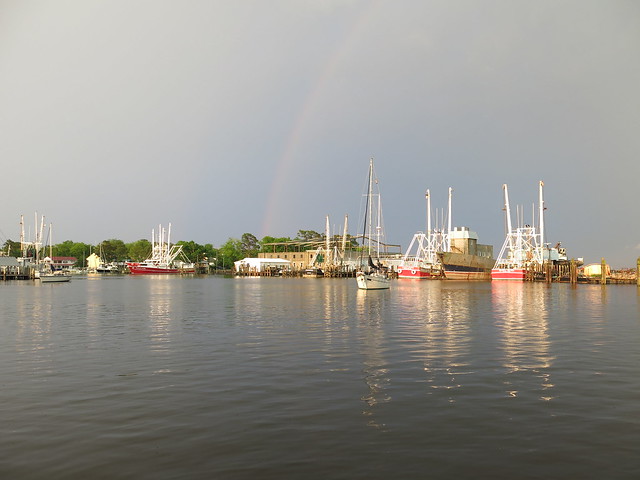 The next morning, we took a walk at Fort Macon State Park and explored the fort which was thoroughly refurbished and interpreted. Then we pulled anchor and headed to the cute little coastal town of Oriental. They call it "the sailing capital of N. Carolina". Why, I do not know but it is a welcoming, sleepy little town with one of the few shrimp fleets left. The tourist info says it was named after a shipwreck off the Atlantic coast, just because the name sounded exotic. You anchor right behind the breakwater or can get a free berth inside. We favored the hook for a breeze. It is warming up for summer in these parts! We spent a couple of days relaxing and exploring the town while waiting for approval from our boat insurance to be slightly below Cape Hatteras. Did a few boat projects to prepare the boat to store, then headed up to Hurricane Marina about 30 miles away, way up a river. A small boatyard, you don't need to schedule your haul out weeks ahead of time, on the spot will do just fine! We're in a great spot in the yard, close to everything we need and the quietness of the place is something we are both really enjoying. We aren't as close to our friends Frank & Deb now since it is a 45 minute drive, but they are the ones who suggested that this would be safer from storms here. The staff are friendly and we feel like the boat will be safe here. Plus they have a paint shed with compressed air so we're planning to prep & paint our mast & hull this Fall if everything goes as planned. The marina even has a nice cat named Oliver.

For the past few days, we suffered through scraping the bottom in our paintsuits at about 90 degrees (Jon really persevered on it), I got some varnishing, cleaning, waxing, packing done and Jon did some maintenance on the truck and worked on designing the camper box some more. He added a foot to the design so the length of our new home will be 17 x 8 feet. Did I mention I am supposed to be getting a washing machine on this baby? If I do it'll be my first since we've never had a house and didn't put one on the boat. Our thoughts are somewhat consumed with the finished product of a completed overland camper. Here's to dreamin'! With any luck, we'll be headed north in the next couple of days.