All About the Truck If you aren't in to truck refurbs or custom RV's our lives would seem pretty boring right now because they are wrapped around this project pretty tightly these days without many interludes.
Have you ever really studied the interior of your car from the headliner to all the little pieces & parts that make up the dash and side door coverings? It seems so perfectly fitted. It isn't to be taken for granted. After several days of affixing Rattle Trap top quality sound deadening material (we felt we needed the best there was!), we started putting the interior parts back in. Not easy! After Jon got me started, I did most of the sound deadening which involves fitting & cutting sticky back rubbery material to most of the interior and then using a special roller to flatten each piece out so that its tightly bonded. We ordered 2 big rolls of it and had just barely enough to cover. After prepping the headliner and rear panels for vinyl and headliner material, we sprayed on contact cement and then Jon tried to smooth out the fabric on the panels without wrinkles while I held the material up. This whole thing is very hard to do! It took over 4 hours yesterday for the rear panel and the best we can say is we did it ourselves! We got some wrinkles.... But it still looks nice and it is installed now. The headliner material looks spiffy too. Parts of the dash are in and there's more ready to go. So many little pieces. 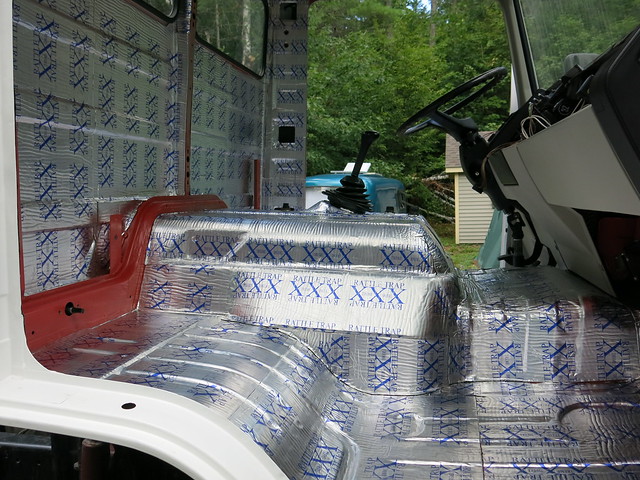 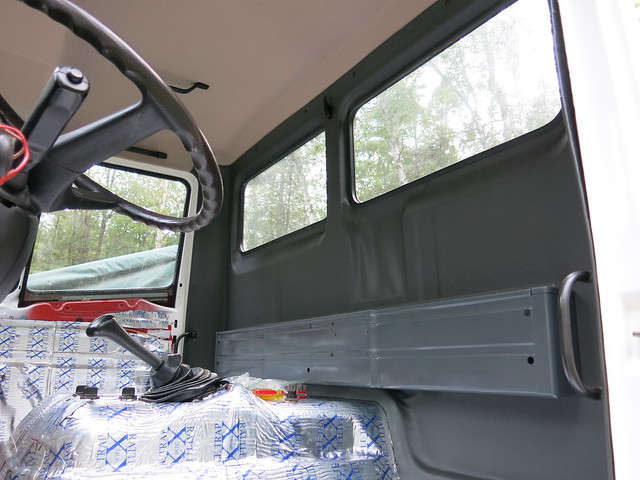 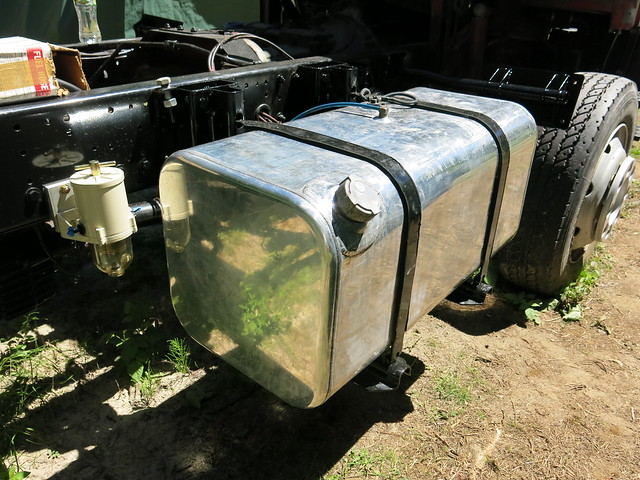 The fuel tank is now fitted and Jon added a secondary fuel filter. We still intend to get another 50 gallon or so tank but are not in a rush as there are other priorities. The fenders, flaps and steps are painted and reinstalled. We got a new tailpipe and painted up the heat shield on the muffler. I've been working on prepping and painting the parts of the chassis, mainly the undersides of things, that couldn't be gotten with the dustless blaster which is a real pain because part of why this truck has very little rust is because it was undercoated with a thick, waxy substance that is difficult to remove. 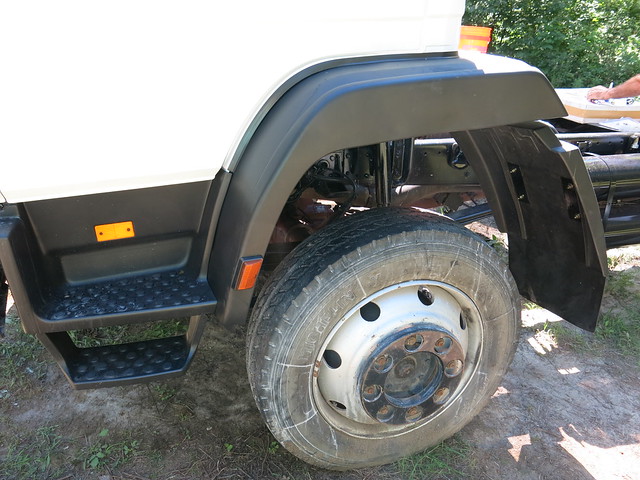 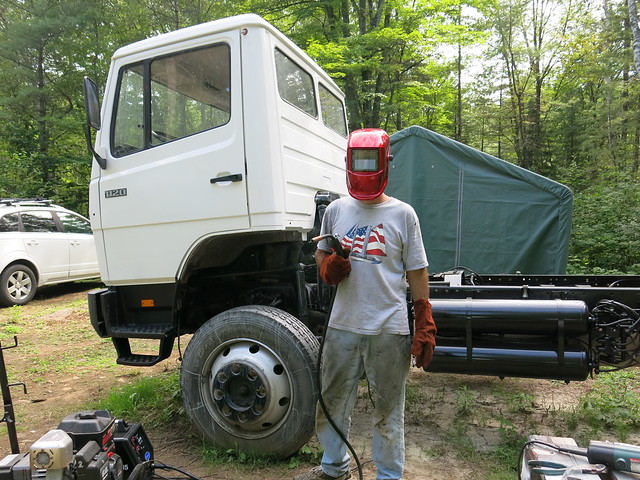 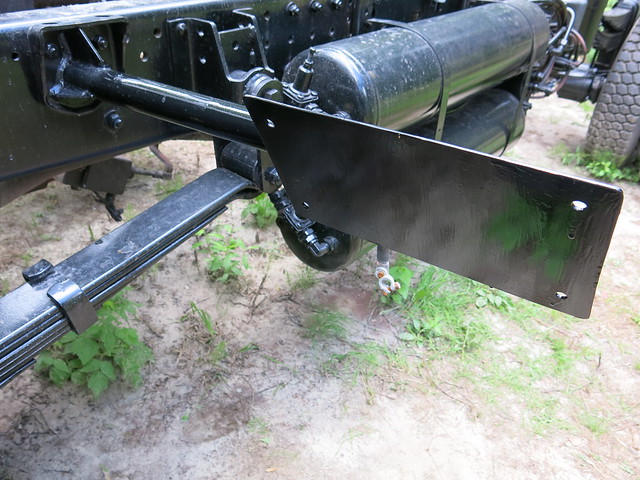 Jon has now entered the world of welding. He welded up some new plates for the fender holders that were rusted out. I think he looks really tall in his helmet. He said he thinks it is either the fact that he has to run the welder off our generator or the reality that he is brand new to welding that makes his welds a little rougher than he wants but they are holding up the mud flaps now and seem up to the task. I'm sure he'll get a lot more experience before this is all over. 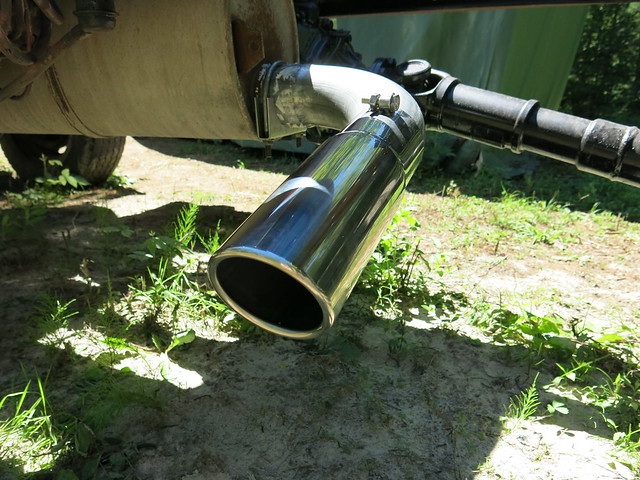 We dropped off the new shocks for bushings to fit the truck, are having new sway bar fittings fabricated and the truck seats should be in this week. Jon even found a license plate converter to fit USA plates because the truck was set up for European ones. The holes& backing plates are drilled for a front overhead roof rack that is in the planning stages. It will hold a set of driving lights and be able to accommodate some roof gear if we need it. Jon hopes to finish getting the new hose run for the fuel system this week so that we can get the truck running again to position it under the subframe. It would be nice to get that back on. 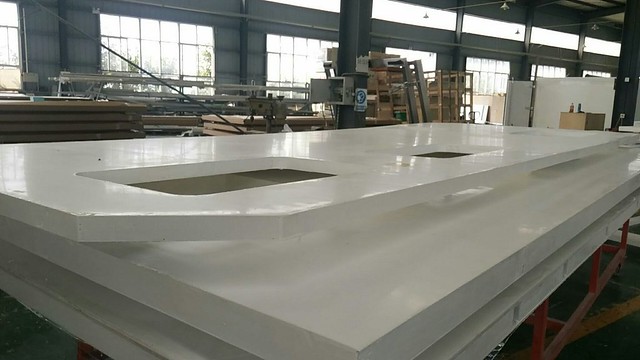 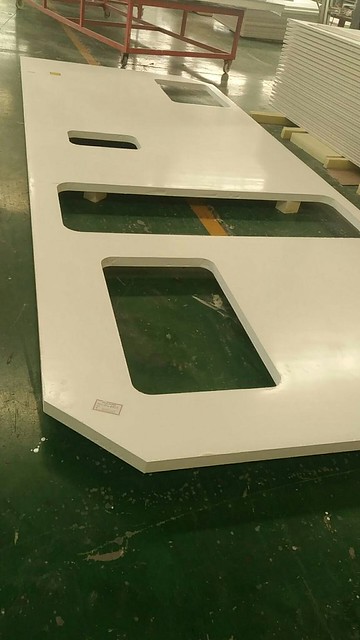 Got an update on the fabrication of the fiberglass CNC cut panels for the Total Composites camper box and here are a couple of pics. The box is being made in China and is almost ready for shipment. Apparently, it will ship to LA then be put on a train to perhaps Albany, NY where we'll pick it up with our truck. We have to iron out those details this week. We're pretty excited for the box, Jon especially since he designed the whole thing. Hopefully it'll be as he drew it. 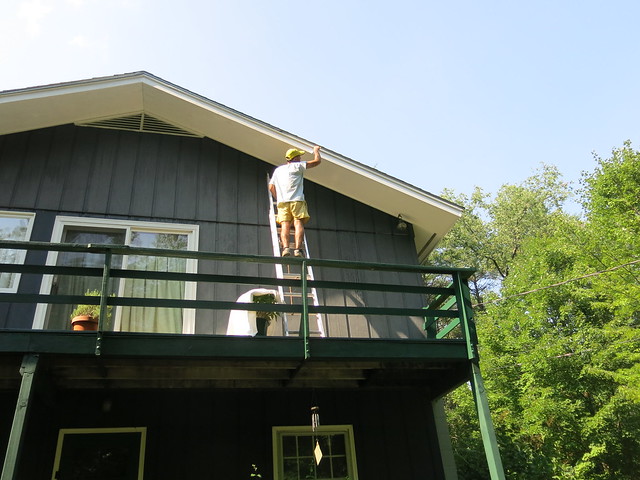 We took a day off from truck stuff and painted all of the eves on my parents' house. Now they're as white as our truck! It's been fun spending time with my parents and getting a homemade dessert fix since we have no oven in the camper and I miss by boat galley. 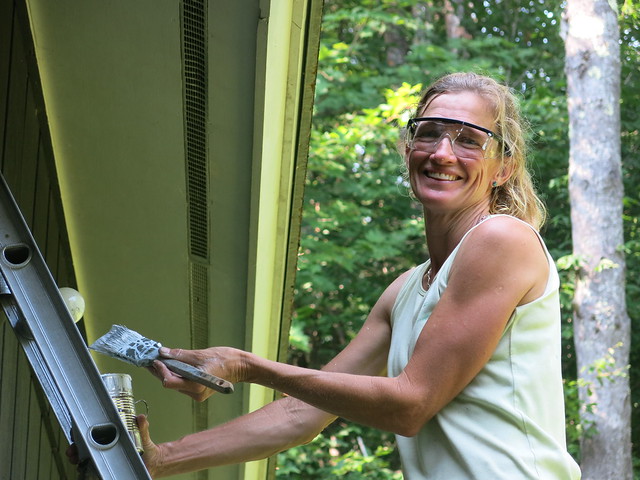 And Jon is getting to meet some of my high school classmates. Its looking really good to rent a building here in Thetford from a classmate Darren that would work beautifully for putting the camper box together, we caught up with Jessie & her family, met up with Cory at a firemen's BBQ, and hung out with old friends Becky & Mike over a campfire at our Bradford compound. I just can't believe its been 30 years but then again, we haven't spent this much time in this area in all those years either. All good fun and a welcome distraction from hovering over the truck. 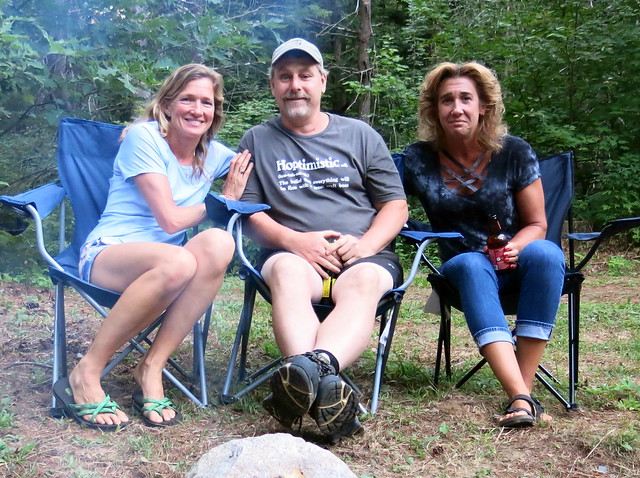 We've also discovered some decent bike loops in our area. There are plenty of offroad tracks that make for quiet trails and we've found that a ride first thing in the morning while the dew is drying helps us stretch out without making us too tired to put in a full day of projects. Its very hilly around here though and our driveway is one of the steepest ones! Anyway, it keeps my head on straight. For now.

A bear has visited our Scamp camper when we weren't home and left her muddy paw prints on our door. Haven't seen hide nor hair since but there's still time!

I guess I'll let the pictures do the rest of the talking. 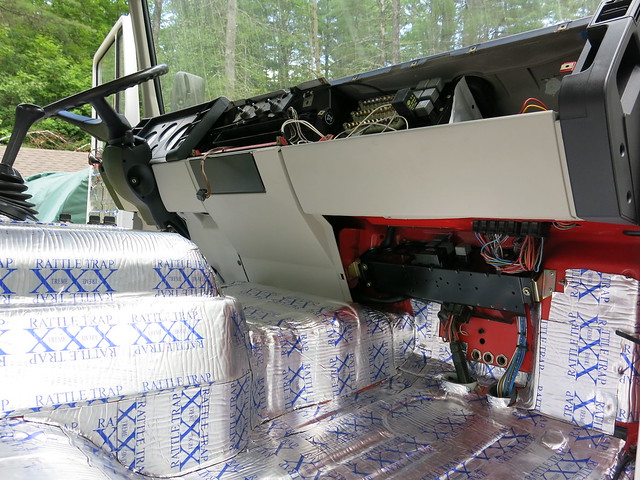