A Truck Update and Getting Through Florence This blog has gotten away from me again but there's been a lot happening. To everyone who was worried about us & Evergreen getting through Florence, thanks for your concern & support. We feel very, very fortunate that the storm weakened & turned slightly away from the direct hit that was predicted. It saved us and many others. We've come up with yet another great weight loss plan. It's trying to get down to your stored boat in time for a hurricane, prepping it, reluctantly leaving it for a hotel and then waiting out the storm not knowing.

But backing up a month..... I wrote this almost 2 weeks ago before we knew about the storm. 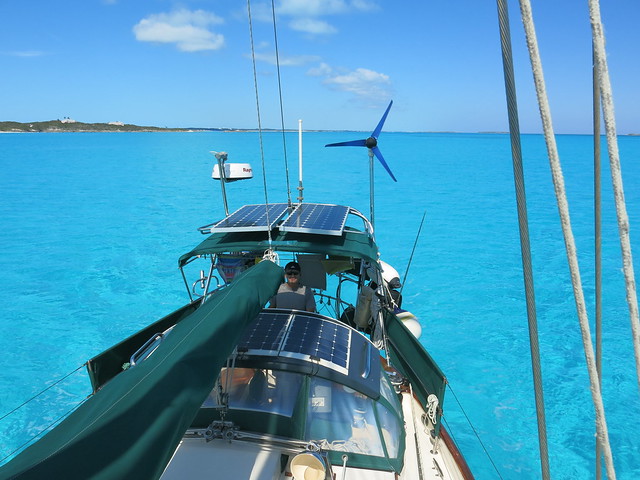 to saddle ourselves with a DIY RV build that requires a whole lot of work like this! 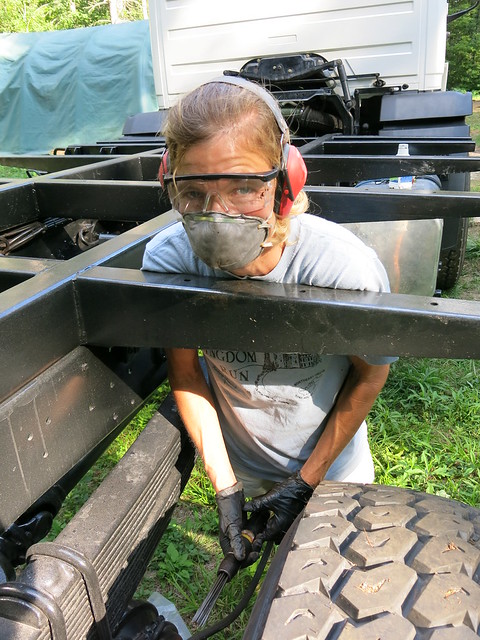 We always have dirt or paint under our fingernails and some body part that is aching. 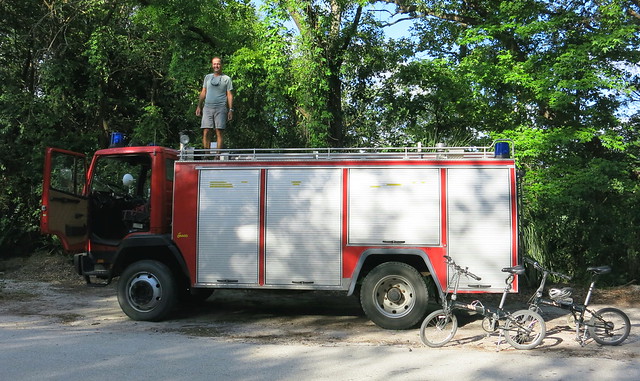 If we were to divide this project into 5 parts, part one was hatching the plan, figuring out which type of truck to get and then zeroing in on one to buy. It also included picking up the truck from the port in Georgia and getting the firebox off the back in Florida, and a rough subframe that would eventually support a fiberglass habitat box. Then driving it up to Vermont for the summer to work on it. Phase 2 was designing the camper box (all credit to Jon) and getting it ordered from Total Composites (a company located in BC, Canada), stripping out the interior and redoing it, painting the cab from red to white, continuing the work on the subframe to shape it, cleaning & painting the chassis, doing the single rear wheel conversion with replacement larger tires and doing a few hundred other things to the chassis. Well, we are nearly done with phase two. 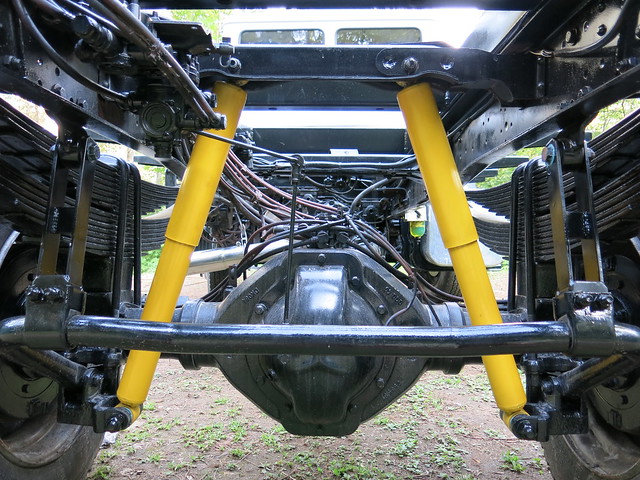 The tire conversion was easy, since this was something we couldn't do and needed to hand off to the tire shop. Of course because the rims are so heavy, we needed to rent a U-haul trailer to take them to the tire shop. We got General Tire Grabbers which are a bigger, taller, offroad tire that takes us from 55mph on the highway to 63 for the same RPM and they are quieter and smoother, plus the truck is now higher. We were getting 12.6 mpg before this change & perhaps whatever improvement there is will help offset the weight of the completed habitat box. Not that I needed to climb up any higher to get in & out of it! It feels nice that the new rims which were once on the ship from Germany and then on the back of the truck for the drive up here from Baltimore are now installed and the lugnuts and covers all sanded & painted. And we only have 4 wheels now! You can see the difference in the tire size in this photo. 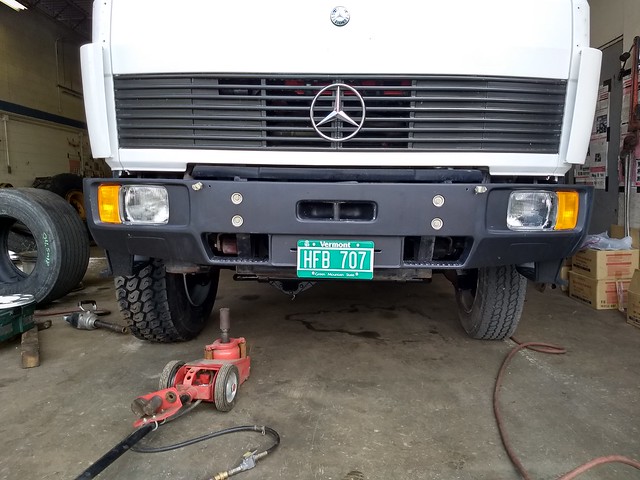 The rear shocks have been replaced and we had new link plates and bushings fabricated to help them fit properly. We got new side view mirrors because one of the old ones had apparently gotten too close to the fire (they were melted) and we wanted the little insert mirrors to help fill in the blind spot. These are also heated so that they'll stay clear in cold weather. We finished compounding and waxing the truck cab from our mediocre paint job. The new seats are in and look spiffy with the gray and black interior color scheme and they smell good too! It only took about 5 times of in and out to get them all situated in their bolt hole spots. The job we did on the headliner was not to our liking but we were going to put up with it. It was a little wavy with wrinkles. But then when we were installing the sun visor screws, the drill caught the headliner material and within a flash, there was a big mousehole chewed out of the fabric as it wrapped around the drill. Well that, we couldn't figure out how to fix and there was no way we could live with it so we took the headliner back out and drove it down to Keene, NH to have the "professionals" do it. It is now reinstalled and much better although we can see how tough a job it was since even they got a couple of wrinkles. Since this was a fire truck, there was no stereo or speakers so Jon fabricated some fiberglass & carbon fiber door pockets that hold a set of speakers and I painted the door cards. I have done more painting this summer than in my whole life. The stereo is also the navigation system, rear & dash camera and in cab computer. 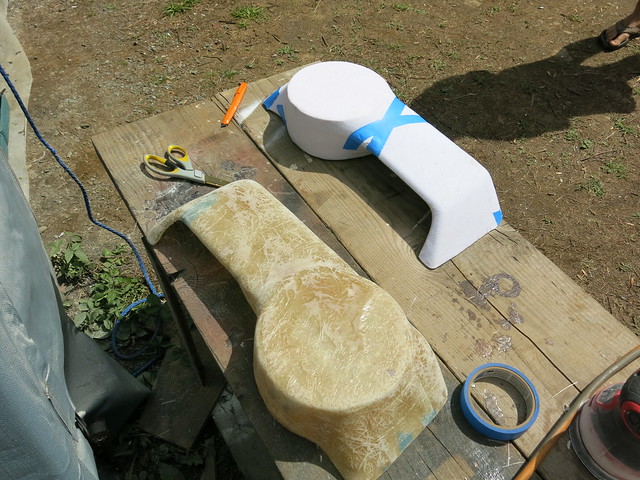 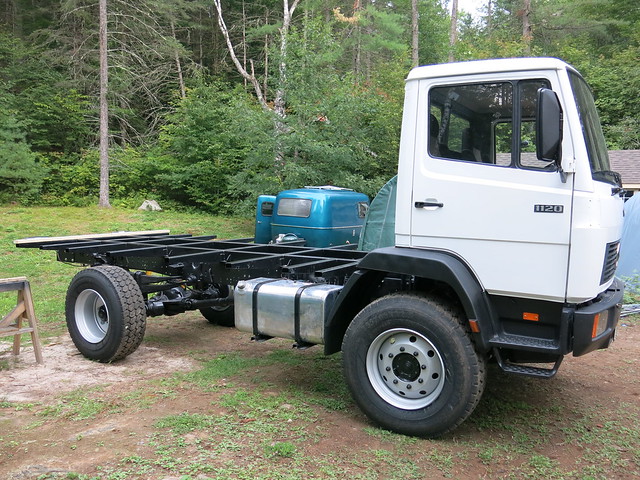 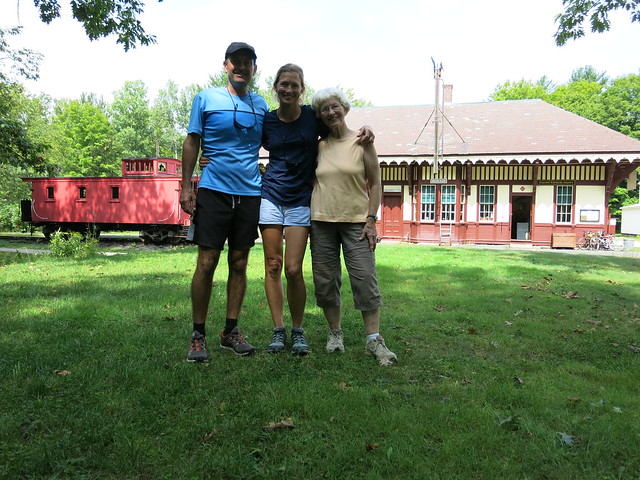 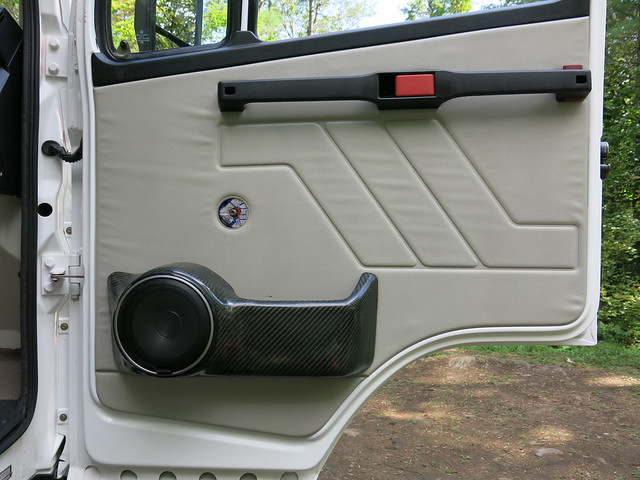 We've done some nice bike rides & walks with my parents the past few weeks and have checked out some new rail trails. They have their own feel, but you can't beat riding without traffic through a corridor of green.

We took the truck down to Osgood Fabrication in NH to get a few things done in prep for the habitat box, which we now have a delivery date for of October 5th. Much later than we expected but I guess China is a long way away! Because we were getting concerned about the lateness of the box delivery and how cold it might be in Newport, VT at that date, we looked around for a place closer to Thetford where we have spent the summer and found a quonset hut owned by a former classmate of mine that we have arranged to use for October. It is big enough to pull the whole truck into and then put together the box beside it so that all is under cover out of the weather. Phase 3 is getting this box put together and on the truck. At that point, it will have become an overland camper with an empty interior... enter phase 4! We will fit out the interior over the winter in NC, while we are back living on Evergreen (thankfully!). We envision phase 5 will be making the underframe storage boxes, tying up loose ends and sorting out anything we've missed. 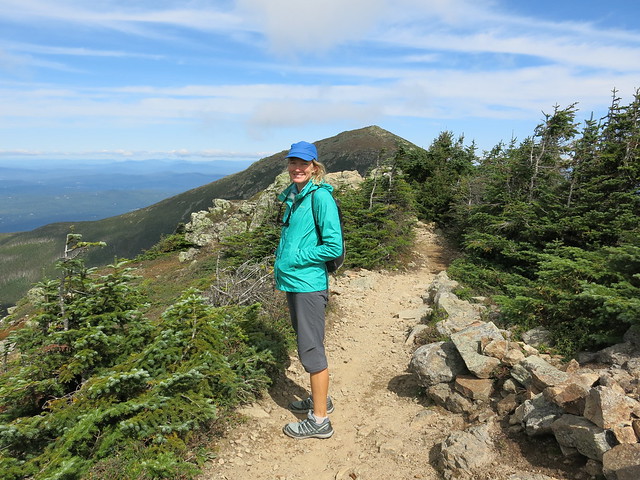 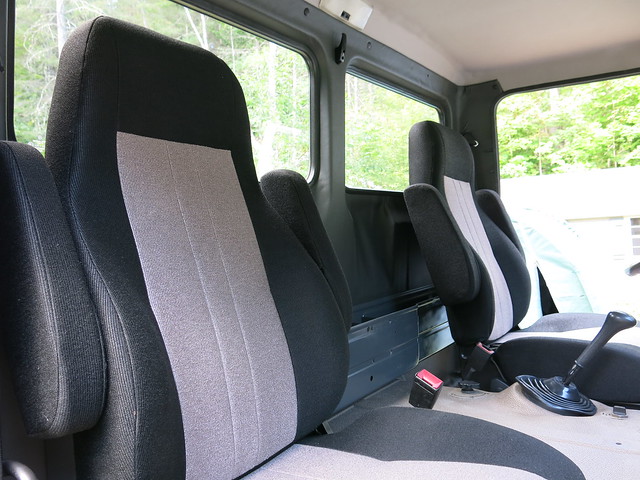 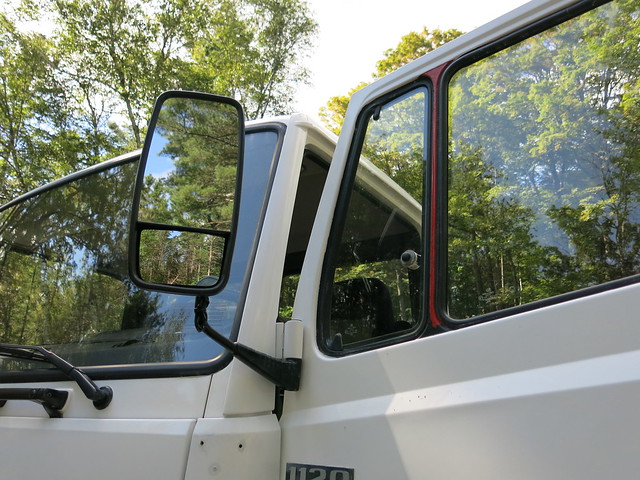 After dropping off the truck and free of any guilt of not working on it, we quick put the Scamp camper on the hitch and skipped off to the NH Whites Mtns for a getaway in the Presidentials. We biked & hiked for a few days, one of which included the peaks of Mt Adams, Madison and Jefferson and another of Lafayette, Haystack & Lincoln. It felt great to be on the trails in alpine terrain on 2 beautiful, warm, windless days. Then we stayed low on 2 days and biked instead, getting drenched on one & freezing in the wind on the other. The season is transitioning. 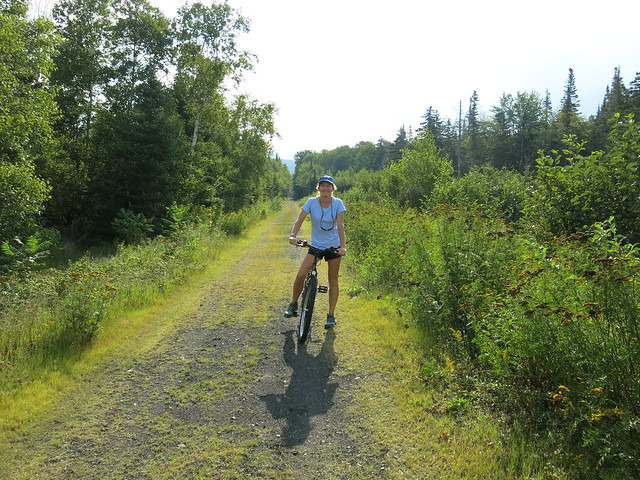 On Sunday, after a great hike, we were driving back and heard the hurricane was coming, literally making a beeline for our boatyard. We have a habit of tuning out the news day to day since we can't take it. Problem was the truck was at the fabricator and all of the windows & doors for the RV were arriving on a Fedex truck from California in 2 days. So Monday morning was a scramble to get things put on hold and then we started driving down to NC to take care of our boat. When we got to Bayboro, NC the next day, the forecast was still looking grim. Prepping Evergreen felt so hopeless. We have a lot of years and memories tied up in this boat and it hurts to think some harm could come to it that we can't control or participate in helping to avoid since we weren't in the water. The predictions were for 18 feet of storm surge at which point the entire boatyard would become invisible and all the boats would float off their stands and become a mass of moving fiberglass. I envisioned every dread scenario many times over in the coming days. We did all we could to reduce windage and seal it up with tape in case it did fall over, maybe we could keep the water out until it could float upright again....

Then we reluctantly left for a hotel in Raleigh for 3 nights to wait & worry while the storm passed. We felt very anxious. The boat means a lot to us, it is beautifully built by so many hands and it has taken us to so many incredible places. It's been our only home for 18 years and it would be terrible to have a hurricane snuff the life out of it. Uhh!

But somehow, as these unpredictable storms do, we were spared the worst of it. By weakening and turning slightly south, we came out just fine. The surge was about 7 feet, which Jon predicted at about 8 feet things would start to get iffy. Not a drop of water entered the boat despite huge amounts of rain. The flooding loosened our stands and floated 3 boats off theirs, littered the marina with debris and the wind tore up the trees and deposited many leaves & twigs on our deck but that was it. It was another sailboat, Freya, who spent the storm anchored out in front of the marina since they couldn't get hauled in time that came in and shot some video of the boats. That was how on Friday night, we could see our boat still standing there, OK. By the time we could get through on the roads on Saturday, the flood waters had receded a lot and most roads were open near us. All of the devastating flooding happened a little further south of us in New Bern. So sad. I95 was closed at our exit heading south but to the north was clear.

Exhausted, we celebrated still having our boats with long time friends Frank & Deb, who live in the next town over, where we plan to spend the winter. Frank admits he was freaking out too and we both vow to try to get the heck outta there if another storm threatens since none of us want to go through that kind of angst ever again. I hope, hope, we never have to. 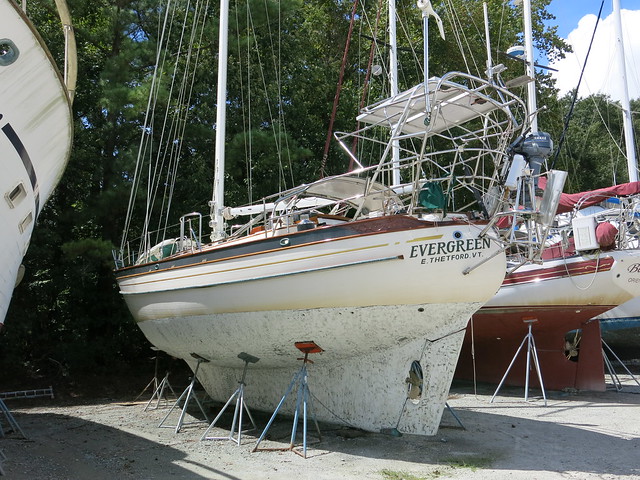 We tidied up Evergreen and tucked it in once again before getting back on the road to head back up to Vermont to do Phase 3 of the RV and hopefully do some fun things this Fall, our first in years. We are both looking forward to returning to our floating home though for the winter. There is so much to do to get it all painted and waxed and all the gear back on before we can put it in the water. It'll feel luxurious compared to the scamp camper and I'm missing my galley really bad. I can give Evergreen some TLC while Jon fits out the interior of the RV. One thing is, we've got our work cut out for us. It can't be done fast enough.