Seaons Greetings! Well, we're back in NC and Evergreen is in the water with a new bottom. We are in our winter slip in Washington, NC and feel relieved to be settled in if only for a few months. Haven's Wharf is a really attractive, small marina and we're happy to have a space at it. And after a LOT of searching for a place to rent as a workshop to continue the build of the RV, we finally found something yesterday that is acceptable which is great. 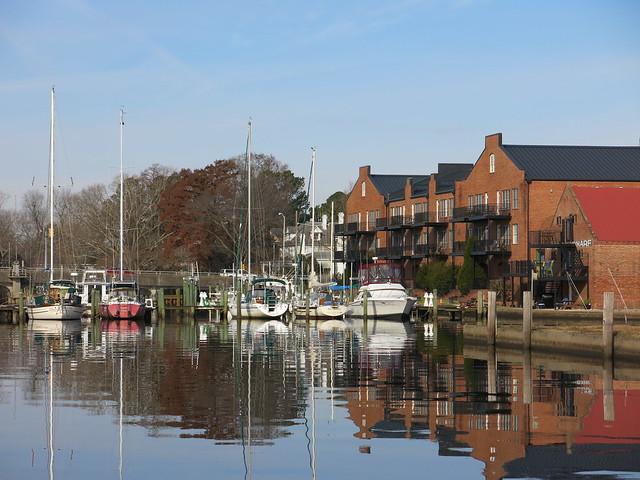 The last few weeks were sort of stop & go. We did get the replacement cargo door and the missing extrusion for our camper box so that we could complete the assembly but we had quite a few down days waiting. We blew through a ton of propane keeping the plastic bubble warm enough for adhesives to cure. The day the crane came we had to roll the whole camper box out to the opening of the building we'd built it in so that the crane could reach it. We used 8 moving dollies and slowly pushed it over, then disassembled the bubble- yay! It was sort of the culmination of a lot of work and while it was exciting to get the box lifted, we also discovered that it sat about 1 inch too far forward on the subframe so we couldn't bolt it down. See, when Jon did the final measurements for the box, the subframe was not on the chassis because we'd removed it for the sandblaster to come. And we felt pressured to get the box ordered since it takes so long before you get it. We paid for the box in mid July and then received it on October 19th... It took a lot of back and forth correspondence between Jon & Total Composites before the box went into production trying to prevent as many surprises as possible, but just like anything you do for the first time, it doesn't usually go perfectly smooth. I know we both aged a lot this summer! 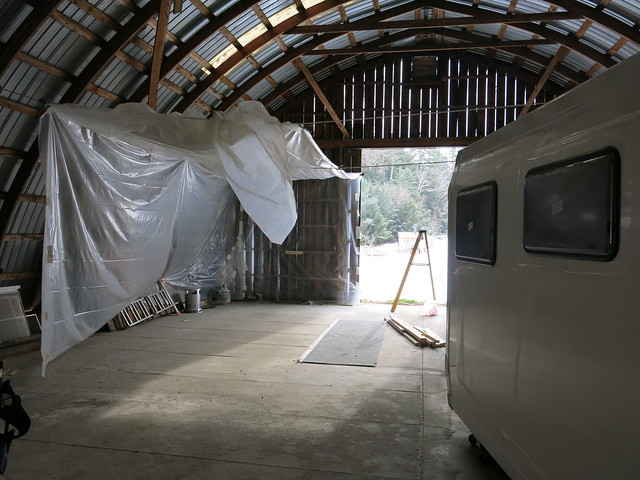 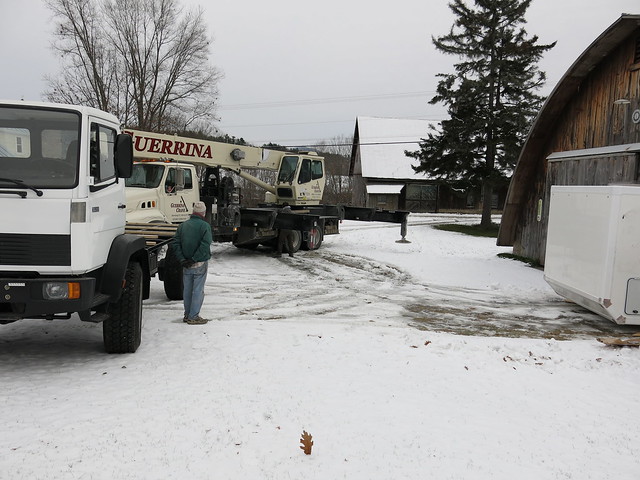 Given that it was the week before Thanksgiving and it is a busy time for Osgood Welding, the fabricator we've been using, it ended up taking a full 2 weeks for the work to be done to slide the subframe back a little and realign the mounts. And all that heavy lifting we'd been doing culminated in Jon's back flaring up so in reality, this delay worked out because he had time to rest up and heal. Although it was stressful at the same time because we knew we needed to get down here and get the boat set for winter. We got to have Thanksgiving with my parents which we were originally going to miss, and witness 3 snowstorms so we got to go snowshoeing several times! It was nice to have that extra time together. And we got our fill of snow. My parents have been nothing short of wonderful this whole summer and fall and have extended every generosity possible. Plus we have had a lot of fun. For some strange reason, all four of us got this really odd illness just after (thankfully) Jon & I had finished putting the box together. We all had profound fatigue and nausea with no appetite whatsoever. It was almost comical when we would convene for dinner and try to force ourselves to eat, only to not even be able to think of having that food ever again. We also would throw in the towel early because we were all exhausted. It took a few days to pass and we were elated when we got our health back again. It really is true what they say, it you don't have your health you don't have anything!

Once the truck was ready, Jon raced to get it bolted down and we both loaded up the truck & car with all of our tools and parts that we've been accumulating for the interior build. After sad goodbyes to my mom & dad we were on our way south. The truck performed beautifully and we arrived to our boat in need of a good wash inside & out, but otherwise basically OK. NC is seriously humid and I would say that mold & mildew grows really well here! All of the interior work we did on the truck has really transformed it, along with the big tires & weight of the habitat, to a very comfortable, much quieter & smoother feel. I love my air ride seat! Very exciting. 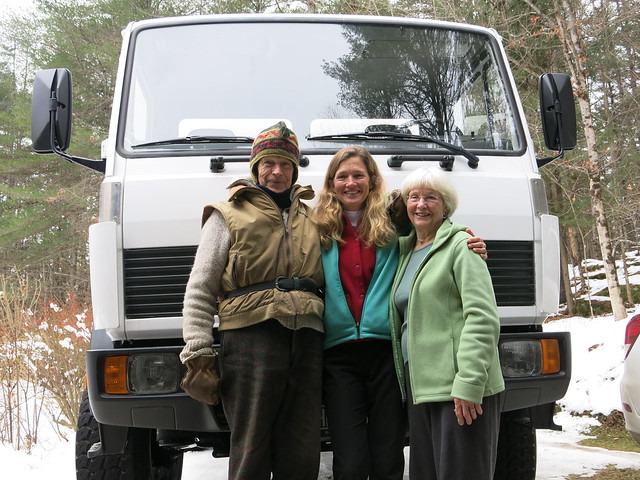 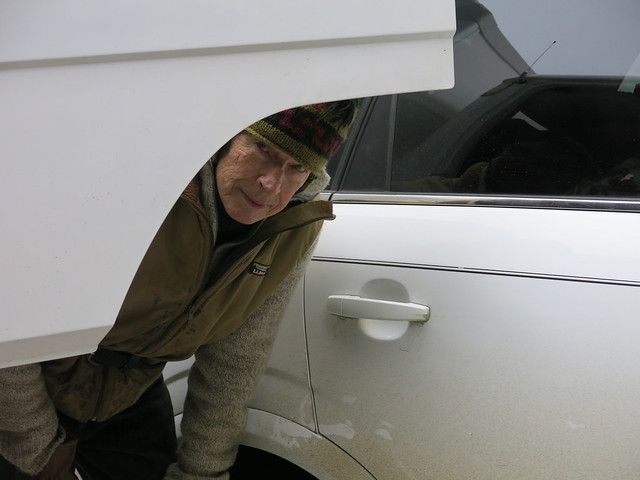 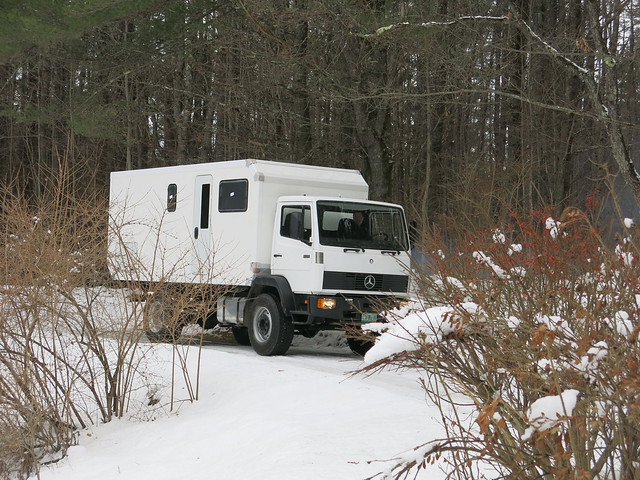 It was a race to get the bottom sanded, barrier coated and painted during the first 3 days because the weather was good and the weekend promised a winter storm. It was deja vu with the cold though for getting paints to dry and heating a boat that is out of the water is really hard to do! It felt so good to launch and once we were in the water, the boat became much easier to heat. The NC grasslands are quite pretty and we stayed at the dock at Hurricane Boatyard for a few days while the storm passed- thankfully we only got rain! 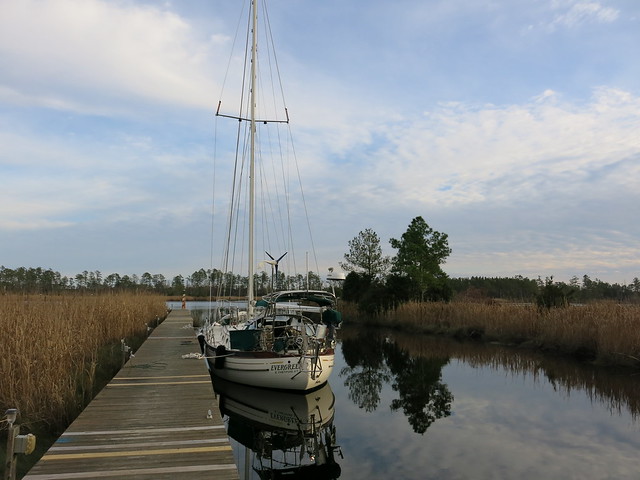 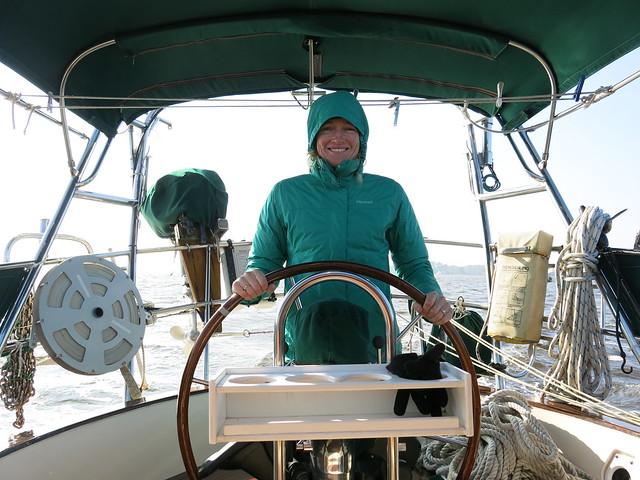 We moved Evergreen the 44 miles from the boat yard to the marina in Washington. It was a cold, windy day but bright & clear. Lots of seabirds. How they do it out in the cold with those spindly legs I don't know. We chugged hot drinks to stay warm and made good time. We can't remember the last time we were moving around in a boat in these temps. But we got tied up and really like the area, right downtown. 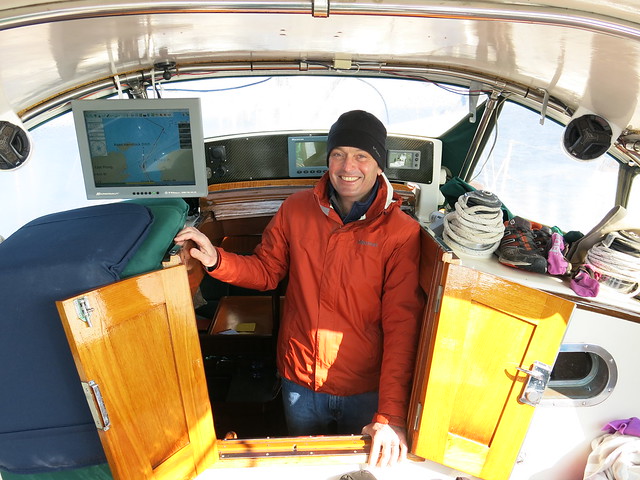 We've taken a couple of days off to explore some, checked out a couple of parks to walk some trails, joined the gym, shuttled the car & truck between the boatyard and the marina in Washington, and we've done some more thinking and planning. We have decisions to make. Should we get a composting head in the RV or a cassette head? Innerspring mattress or foam? The long or shorter version mattress for more cabinet space? Wet bath or small, but dry bath? Which solar panels, which stove? We did order a Maxx Fan so now Jon just has to cut a big hole in the ceiling of the habitat! So, looks like we have our work cut out for us. We'll be headed down to Vero Beach for Christmas to see Jon's family. Looking forward to warm temps and to seeing them. Best wishes for a great holiday to anyone reading this. Happy New Year too! 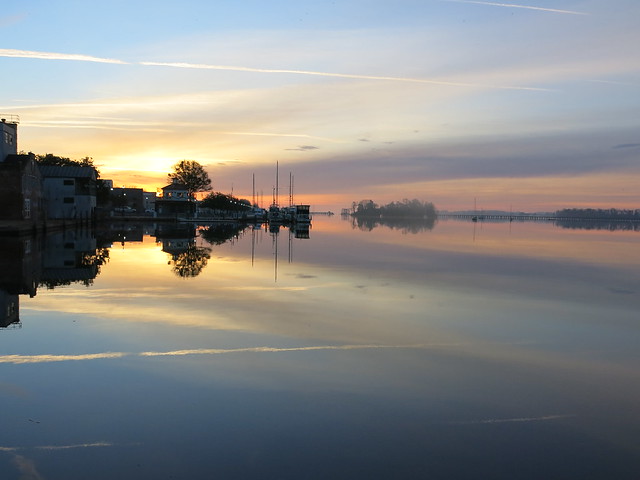