Hope everyone's new year is off to a great start. Ours is going fine. We spent Christmas in Vero Beach with Jon's parents which was nice because we hadn't seen them since May which seems like a long time now that we're on the continent. I can see why so many people flock down to Florida for the winter because the sun alone is so much stronger and brighter than farther north and the air is so much softer. It took us 14 hours to get there because everyone must have left on the same day we did and we spent hours sitting in traffic. Over the days we spent together we made & shared many meals, walked & played with their dog Katie (she's a real ham), got together with neighborhood friends, worked out at the gym and just plain relaxed some. That felt weird. We even had time for some jokes... Mariette's apron says "let's bake some shit" so we are! We got that pile from a practical joke we played on her a few years ago. 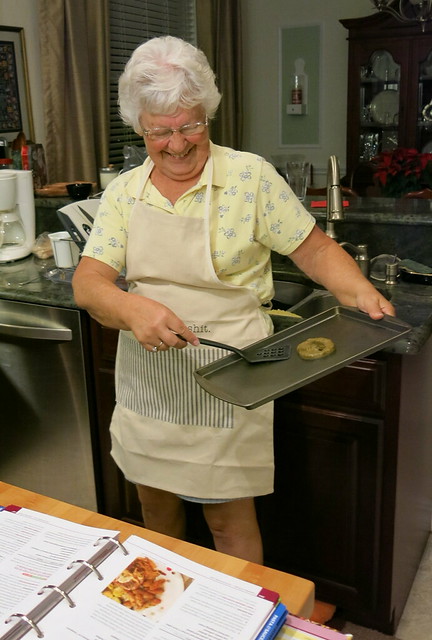 And my sister in law Melissa made these cute family portraits for Christmas presents- here is one of the Turgeon family. I don't think we look this young in real life! 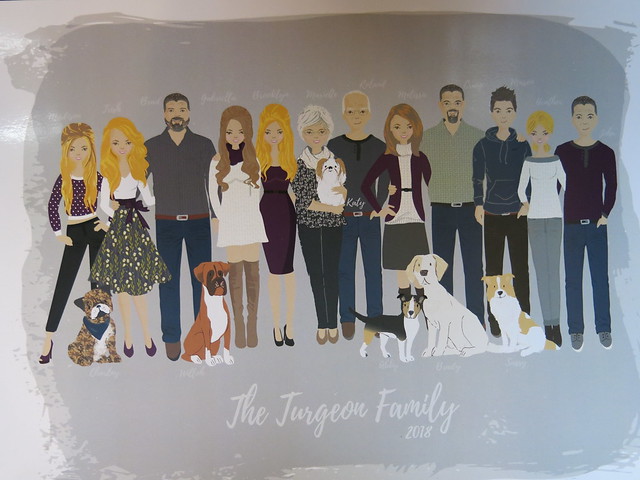 While we were cruising the Canary Islands last year, we met up with Kay & John on S/V Bad Bunny. We leap frogged through the rest of the islands and then met up again in Cape Verde and went to a concert one night with Cape Verdean performers, then sailed across the Atlantic together and had a radio sched but we pulled in to Martinique and they went further south so we had to part ways. We were glad to hear that Kay is back visiting in Ft Lauderdale for a few months so we were able to meet up. We biked through Ft Lauderdale very early on Sunday morning when few people were up besides the birds. Kay showed us around her stomping grounds and we really enjoyed seeing her. 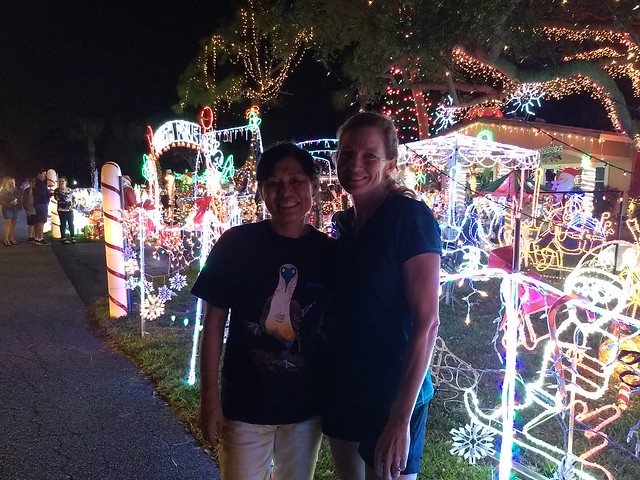 When we told each other we wanted to hit the ground running for 2019 we really meant it because we drove back to NC on NYE in much better traffic conditions to get a jump start on it! It just felt like we hadn't made any real progress on the RV for a month & a half and we don't want to lose our momentum. It is too huge of a project and we want it done as soon as possible. My mom reminds me of where we were last year or the year before at such and such a date and not only does it make us miss all the experiences we've had traveling, it makes us realize that our lives are whizzing by and you only live once (YOLO) so you've got to cram it all in. I remembered recently that a sailboat we knew named their boat that.

Before we left for Christmas we'd driven over to Raleigh to source wood for the build as there aren't any lumber stores in the small town of Washington where we are. We found a really nice, professional place called Horizon Forest Products and did some planning as to how Jon would make the interior cabinets look. We've decided on a walnut & maple mix. Then we went to a hardwood flooring store and ordered up the flooring for the interior. It is made of acacia wood and has a similar light & dark mix. Then we visited a mattress factory thinking all this time we wanted an innerspring mattress after so many years of sleeping on foam. Surprisingly, we both prefer foam after trying out a bunch of beds. So decision made, we'll have a 7 in foam queen sized mattress in the RV and since we're not particularly short, we'll get the 80 in.

Once we returned to the boat from the holidays, we drove back to Raleigh in the truck and picked up a load of wood to get us started. When Jon ordered the fiberglass panels for the truck he also planned for our interior bulkheads to be made of the same material & ordered them up so this first week of January, we spent cutting & bonding in most of the interior walls! It felt really good to see the interior taking shape and to make some forward progress. The layout is that when you first walk in, the sitting area & table is to the right, the head wall is directly to the left and the galley is in front of you. Then to the left and back is the bed, sort of walled in to make room for cabinets and a closet. Underneath the bed is the toy storage area that will hold our bikes, backpacking gear and hopefully an inflatable kayak or maybe that is going on the roof rack?? Because the washing machine is going under there too. Under the sitting area is the water tank, hot water heater, batteries & a freezer. Jon has managed to cram in a shower stall and a separate dry head, for which we have decided will be a composting head- the Air Head. After tons of research it seems the right choice with the least amount of wondering about where to deposit our deposits. We'll have to save room aboard for the coconut husk bricks but maybe I'll make Jon's pillow out of them! I don't think we will ever purchase a more expensive bucket, since that is mostly what it is, but what are you gonna do? Its all in the design. In the galley there will be a 3 burner stove and the fridge is good sized. We wanted a good quality stove because we like to cook and we're used to the size of our boat stove. When I wasn't helping Jon install the panels I was priming the interior profiles for paint which will ultimately be gray but mostly covered up by interior cabinets. And working on the boat since it needs attention too. I re-varnished our table this week. 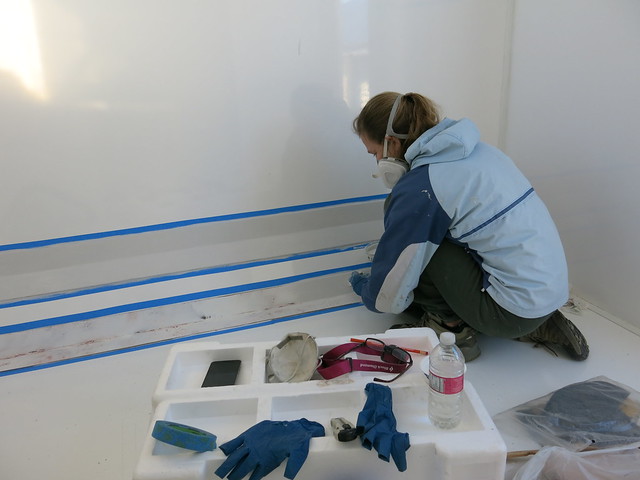 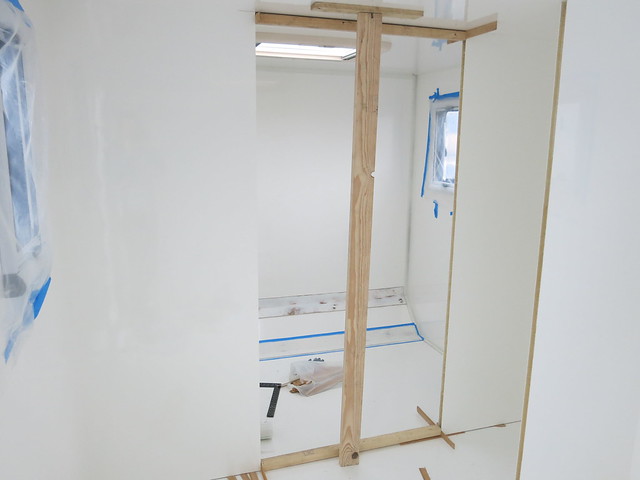 We received the solar panels, Maxxair fan, shower pan and freezer this week. Jon picked out 800 watts of snazzy Bi Facial panels that supposedly can supply up to 25 % more power using their reflective backs if there is direct reflected light hitting them. Given that the camper is white and we will likely have tilting mounts for the panels, we should see this benefit. Jon fortunately found the stove we were trying to special order on Ebay auction instead a few days ago and got the bid so that is on its way. And then yesterday, we drove up to Maryland to a place called Dented Toolbox which sells new, dented toolboxes of course, but also new RV parts with blemishes or dents. We bought a Splendide washer/dryer combo unit with a dent on the side that will be covered up upon installation along with a Coleman overhead A/C unit for the habitat for a lot less than what we were going to have to pay to order all this stuff up. Along with the market downturn, noticeable inflation and the lovely added tariffs that have now taken effect for Jan 1, prices have really risen for these items just over the past few months, often by significant percentages. Buy American? What does that mean exactly when most of American companies source their materials from China? And we really don't make much of anything anymore. Tariffs hurt American companies, American consumers and in the end you pay more for the same thing and ultimately have less choice. And the rest of the world gets on with making alliances with each other. And while we're at it lets wall ourselves into this mess and we can pay for that too, with our health insurance money. But don't touch medicare and social security, social welfare plans put in by the terrible dems that everyone seems to accept & enjoy and even feel entitled to. What is going on in this country? I try to keep my head down.

So while we're eating beans and limiting the amount of superfluous spending on ourselves, we've now purchased most of the major components for the RV interior and there is plenty of work to do to get them all in their place. The workshop is a 20 minute drive from the boat, the closest we could find but it is really working out well and Jon is quite pleased to have his tools all set up and an upright workbench that he made so he can be somewhat comfortable for a change. If I had a dollar for every time he's told me he loves his workbench... aww, it makes me smile. He's doing great things for us. 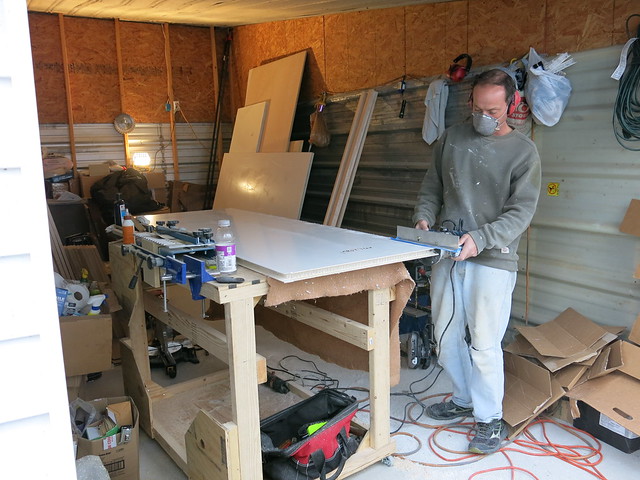 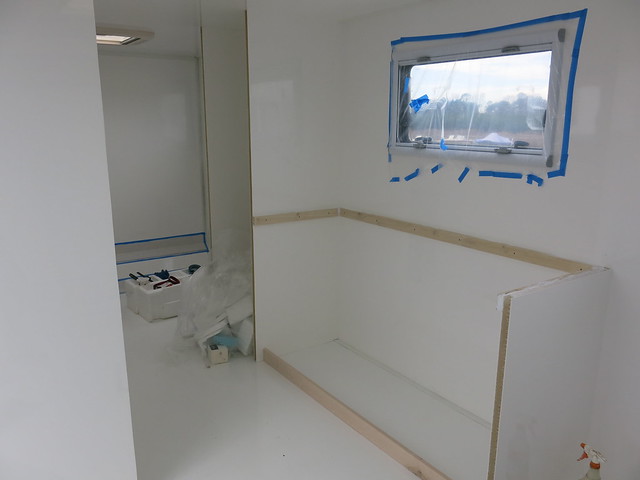 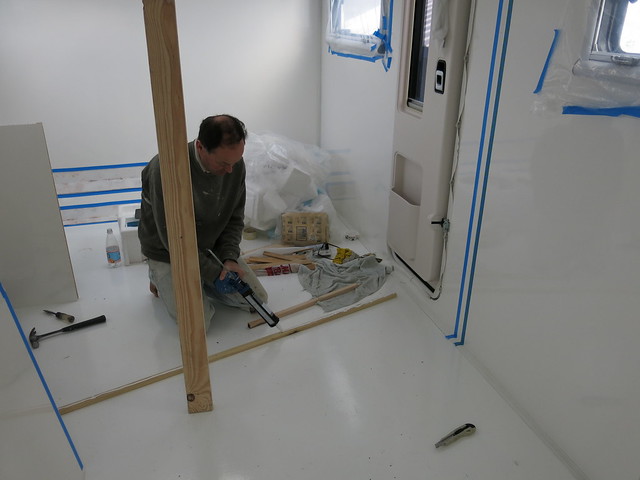 The view from our slip is really pretty and there are so many dead calm eves and mornings in very moderate temps. The gym is 1 mile away and we've gotten into a routine of going there straight from the workshop. This marina has extra fridges & freezers so we can keep a stock pile of ice cream on hand for ourselves (this is like a dream come true), a huge spotlessly clean storage area and a similar workshop where I plan to do some sewing and varnishing soon. Jon milled up all the wooden slats for our bed and I need to varnish them. There are something like 14 slats, made of ash wood and these slats will provide air circulation for the bed similar to what we have on our boat. For many things from equipment to small spaces, and the whole off-grid thing, the RV is very similar to the boat. I guess the main difference is that the RV doesn't need to be ready to go to sea. I miss the sea. Some of the things that we wish we had on our boat such as a washing machine, a larger freezer, A/C & more solar, Jon is trying to rectify for the RV. Now if we could only have the watermaker too....

We bought our car 5 years ago down in Florida when we were 1 year into our cruise and the boat was in New Zealand. We'd only driven it when we were back visiting and it was generally only in good weather. Well over this summer we realized that whenever it rained, the car leaked from somewhere in the back, we had initially thought it was the tail lights. Well this Fall it rained what seemed like a few feet in Vermont and the car began to accumulate a good amount of water. But we were so frantic with the building of the box with the temps dropping below freezing (and the water inside turning to ice) that we couldn't deal with the leak until we got down here. Well, upon digging into the back really carefully on a rainy day here, we could see water pouring in through about 2 feet of unsealed panels in the far back of the car! They just hadn't sealed that area at the factory. So Jon used our adhesive and sealed it all up. Then I shop vac'ed all the water out and worked at drying out the interior over several days. We are pleased to find that the car is now leak free and we don't have to wear our waders in it when we travel all these distances we've been covering. That is progress!

And that's where we're at right now. We have 17 x 8 ft of living space to make a home out of. Making a lot out of a little! Its exciting. I can't wait till the day it is ready to take us beyond the walls.