Having spent nearly a month in St. Lucia last summer, the primary purpose for our visit this time was to replace our broken windless.

As I have mentioned, we ordered a new Lofrens Tigress windless form the Marine Mega Store in England. The windless was delivered on exactly the day we were promised and the Customs's office at the marina quickly and efficiently cleared the package in. Now the fun begins!

You might ask why we would replace our broken windless with the same brand and model? The original only last 11 years and during that time it got very little use - it had a pretty easy life until we moved aboard. The most important reason is because we knew it would fit in the anchor locker. Reason number two, which is just as important, is that after tearing this thing apart not once but twice Barry felt it was really, really well made. The last reason, while important, could have easily been thrown out if not for Reason #2, it was the best price in it's class.

There is one really big difference between an Lofrens Tigress that is installed as OEM equipment on a Beneteau 473 and one you just buy 'off the shelf' that complicates the installation just a bit. The aluminum housing has a cleat/horn cast into it on the 'off the shelf' version. It doesn't take long to understand why the cleat is missing on the OEM version - it won't fit! The cleat sits too high, keeping the door to the locker from closing. 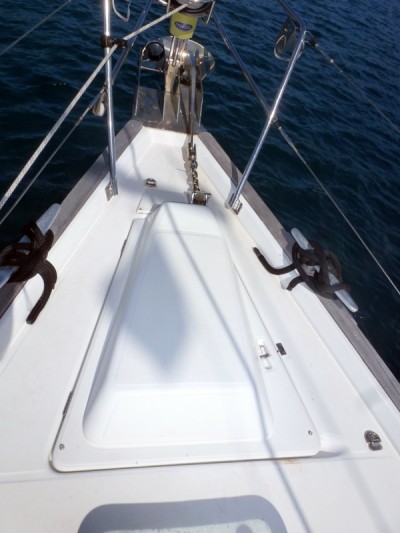 Personally, I'm not sure what you would use that cleat for, maybe to tie off the anchor during passages? Maybe to tie the snubber to? We do those things differently, but maybe that is because we have never had anything there to tie off to? However, even if we could have fit it in, we still could not have used it because we made modifications to the locker door last year - there was a large opening in the front of the locker door (nearly the width) that we glassed in so it is only big enough for the chain to go through. The opening gulped in a lot of water during passages and while there are drain holes in the locker we thought less was less to worry about. 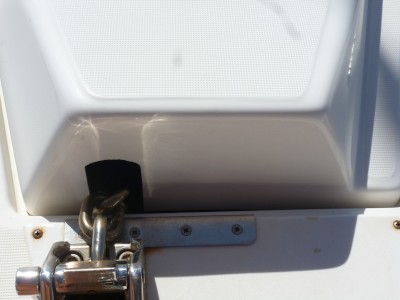 So the first order of business was to cut off the cleat. Unfortunately I did not think to take a before picture, sorry. Barry with the assistance of Gary from s/v Mai Tai's grinder cut off the cleat. Here is an important note for any of you people thinking about doing the same, CUT AS CLOSE TO THE CLEAT AS POSSIBLE! Because Barry had forgotten to measure how much space he had, he cut the cleat off as close to the housing as he could - never dreaming that there would be a void in the middle! The result of the successful removal of the cleat was we now had aluminum filings inside the windless, sigh. Oh! We also had a 2-1/2"x1/4" hole in the exterior housing of the windless.

Now Barry gets his third look at all the insides of a Lofrens Tigress windless as he cleans everything! In retrospect, this was very fortuitous as there were some oversights at the factory. For instance, and this is a big one, not all the internal parts were properly greased - in particular, one side of clutch cone. 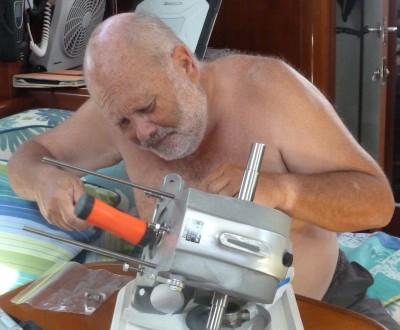 But, hey, what the heck - it's just another two days of total chaos inside the boat while the windless insides are sorted out! 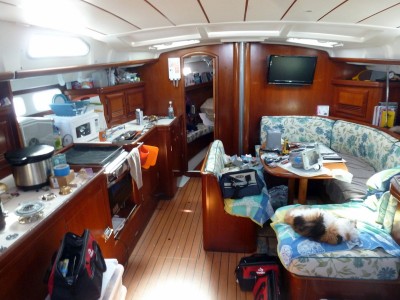 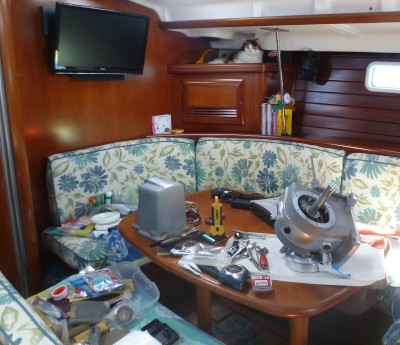 The in the housing was filled with Marine Tex Gray. Everything was pulled out and cleaned. Everything got greased that should be greased before it was put back together. 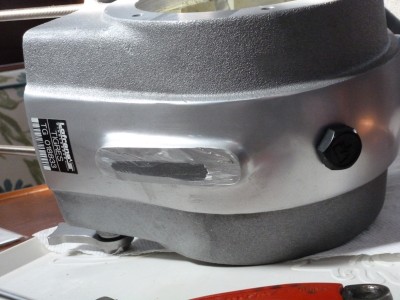 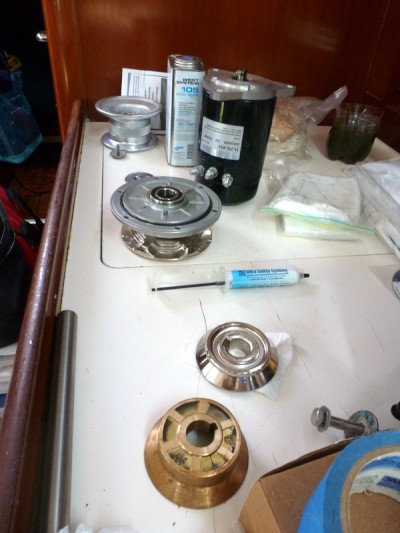 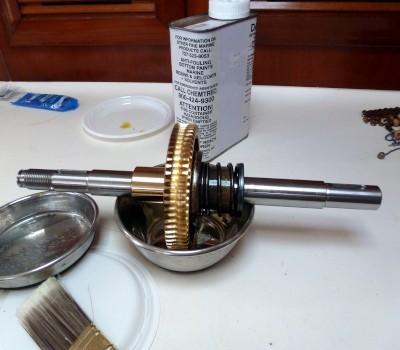 The now newly refurbished new windless was installed while we were at anchor. This meant I had to pull all but 50-feet of our 250-feet of anchor chain out of the locker onto the deck - not a particularly hard job. The salient here was when I saw how much rust there was on our new (installed July 2013) STAINLESS STEEL anchor chain! What the heck!! It's stainless steel, it's not suppose to rust!!! Of course I couldn't leave it like that, so I got out our new (big) bottle of Collinite No. 850 Metal Wax (and rust cleaner) and proceeded to clean off the rust. 200 feet is a lot of chain! Two-thirds of the way through the bottle, I was two-thirds of the way through the chain, when the rain started - I can't tell you how relieved I was and how happy my little arthritic thumbs were! Happily, I got all of the worst sections with rust completely cleaned, but I learned a valuable lesson - some boat projects are better left to others that you PAY to do the job! 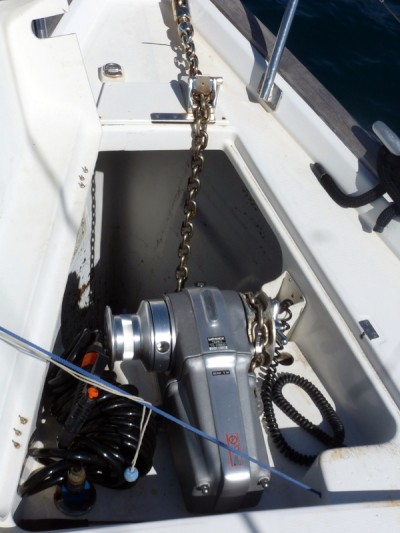 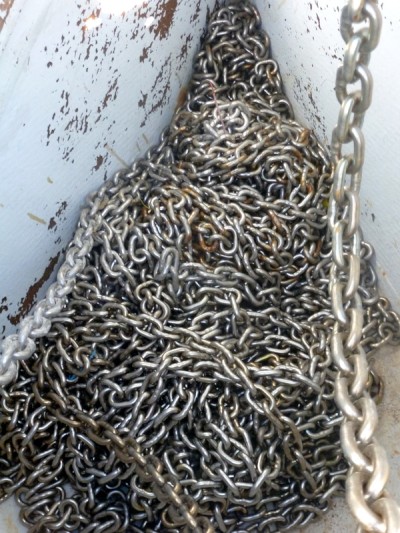 One of the surprises that came up while we were looking for a new windless was the Lofrens Tigress model installed on the boat and the replacement we bought are technically undersized for our boat. They are made for a 38-45 foot boat. Wow, makes us much happier we got a bigger anchor or maybe not, I guess we will just have to see how all of this is going to play out.

One other important note, the original installation was lacking any sort of anti-seize/corrosion inhibitor on stainless steel/aluminum connections. Everywhere we had a stainless steel bolt going through the aluminum housing we had lots of corrosion. A couple were very nearly corroded through! Of all the things you have to check and maintain on a sailboat, I have to say, that wasn't on our radar. On the scale of things, It would not have been catastrophic, but you never want to see stuff like that on your boat.
More
Comments
Newer Older
Contents