I posted a picture on Instragram after a day we arrived in The Saintes that said this was my favorite group of islands yet and that "I loved, loved it". My daughter posted back "Haha!! You say that every time you get somewhere new." I guess that is true, but they just keep getting better and it really is my favorite so far. It is so beautiful, cute, quaint, picturesque, and oh so French!

So here is another side of cruising that you may not think of ... family/children issues. We all have this ideal of what cruising will be when we are dreaming and planning our future, but we never take into consideration how family life will impact that dream. When we left Barry was an orphan already. Both of my parents were still alive but my mother was in the last stages of Alzheimer's. We had not even completed our outfitting in Puerto Rico before my mom passed away. I had spent a lot of time with my mom before leaving and had been able to say my last good-byes to her before leaving, but this had not taken into consideration my father's needs. I took the first plane home so he would know how much I loved him and that I had not deserted him.

When we left all three of our children were married and seemed well established in their lives. Well, as we all know, life is not perfect and our son David's life took an abrupt turn. It all came to a head in the first few days of April. What do you do when one of your children is hurting so much? Well, right or wrong, I flew home to hug him (and help him get on his feet again)!

We all know there are consequences to sailing on a schedule (so to speak) unfortunately I had to get home now and we had to get going! We left The Saintes on Friday morning en-route to Puerto Rico, trying to get a jump on a cold front/trough that was heading our way and scheduled to be in our path on Sunday. Unfortunately it was moving faster than predicted and caught up to us before dawn on Saturday.

What a passage it was! It was like being in a washing machine for the better part of 30 hours -- 8-10 foot waves with 7-second period from two directions (wind driven & large north swell), winds 20+ knots, gusts over 25 knots. We reefed before sunset on Friday and never took the reef out for the rest of the trip (50 hours). The new autopilot has now been named Sonny, short for 'Son of a Bitch'. It had a tough time keeping the course in the large swells pushing us this way and then that way. We discovered (mostly by randomly trying this and that) that with the motor running it helped stabilize things and then Sonny was able to keep us on course better. Apparently there is a way to fine tune Sonny, but Barry couldn't get it to go into that mode during the passage, so I guess we will have to call Garmin.

Oh, and just to add a little more excitement, I discovered a fair amount of water in the bilge during the passage. We have had, sort of, an on going problem with this, but Barry kept telling me it was fresh water (inferring we had not adequately fixed the water tank) and then would run the bilge pump and tell me not to worry. On Saturday, in the middle of the washing machine, water started sloshing out from under the floor boards -- yikes! When I turned on the bilge pump it didn't work -- double yikes!! I told Barry I thought it was sea water not fresh because the tanks showed they still had the same amount of water we let with. He told me to taste the water -- I already do enough disgusting jobs on this boat so I just glared at him with my arms crossed. Well he eventually confirmed it was seawater, so without the primary bilge pump working we started using the manual bilge pump - what a joke. Seriously, where do they get the ratings for these pumps!?! If our lives had depended on the manual pump (well the electric pump too) we would have died if we had been in the middle of an ocean some where! OK maybe that is a bit dramatic but you get my point.

We have always known we wanted to upgrade the electric bilge pump, now we are more motivated to do so. The performance of manual pump is really distressing, so now we will be looking into something that performs better to replace that. The star during this mini crisis was the Super Soaker (& Homer) I bought at Costco for $15 for two (actually called Aqua Zooka) - these are the two most useful items on the boat by far! 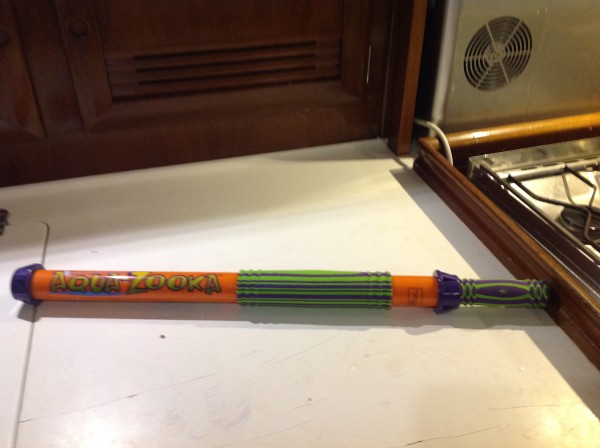 Sleep was hard on this passage. The sea state was the primary culprit but the 'wandering' Sonny and the ingress of water really raised the stress level for both of us and when it was each of our turns to sleep, it was hard to capture. When we got near the BVIs we thought we would just tuck in for a quick rest. We decided to go to Norman Island to pick up a mooring ball (an island we have spent a lot of time at) but when we got there (in the middle of the night with no moonlight) the bay was crammed with masts. Tired beyond belief, we decided to keep going on to Puerto Rico.

Safely tucked in at our favorite Sunbay Marina in Fajardo, PR, I can tell you that it was the shaft seal that was leaking. It has been added to our list of 'Things to do' during haul out in June. I am on my way to the airport and my babies! Dads do not discount this if you go sailing/cruising with mom!
More
Comments
Newer Older
Contents