There is an interesting piece of weather out in the Atlantic that has had forecasters scratching their heads for the past few days, this evening it finally organized enough to be named Tropical Storm Bertha.

The decision to leave Smart Move (located on the east coast of Puerto Rico) during hurricane season in the 'Hurricane Box' was made by circumstances rather than choice. I have been monitoring the weather in the Caribbean daily and for the last three days I've been checking every four hours. It has been somewhat of a nail biter as I have read report after report about what a conundrum Invest93L has been.

When I woke up this morning, the weather models had Invest93L developing into TS Bertha and tracking over eastern Puerto Rico Saturday afternoon. We have done everything possible to make sure Smart Move will be secure and safe in the event that a tropical storm or hurricane passes her way. But jeepers, what a helpless feeling sitting around waiting for updated weather reports and wondering what is happening and speculating what can happen! 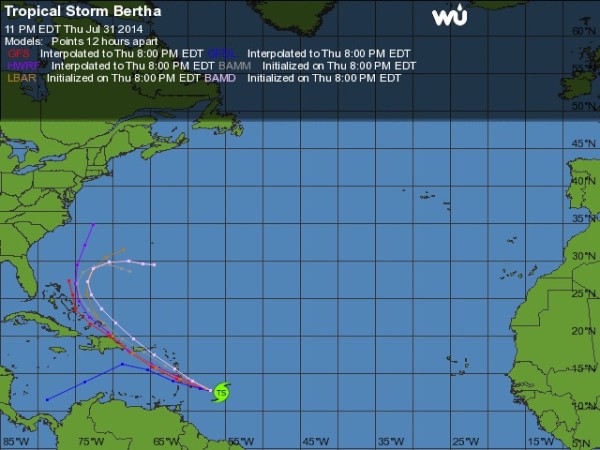 It looks as if Bertha's track has shifted more west than north during the course of the day and four of the six models are now indicating Bertha will pass over St. Lucia midday Friday on her northwest track -- our thoughts are with our friends in St. Lucia. These four models have Bertha splitting the difference between the Dominican Republic and Puerto Rico Saturday night around 8:00. This puts both countries in Bertha's crosshairs, with western Puerto Rico taking the brunt of the storm. However, two models are still showing Bertha heading straight for Puerto Rico, one model passing over the western end of Puerto Rico and the other passing over the eastern end of Puerto Rico. No matter how you look at it at the moment, it doesn't look good! 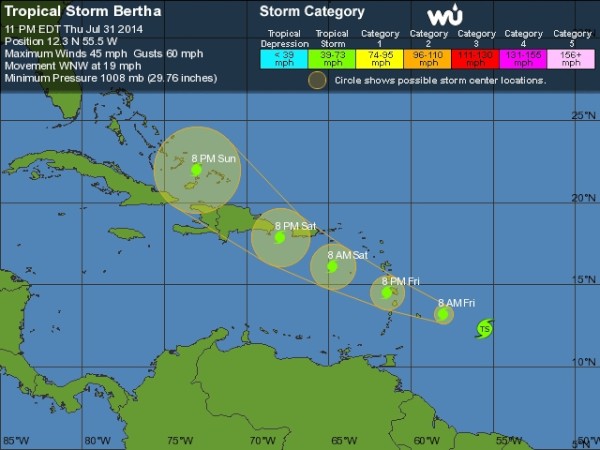