We have arrived in Grenada -- happy dance! We were trying to get out of Puerto Rico the day after Thanksgiving to take advantage of some unusually light east winds to make as much easting as possible before the winds built again. To keep things exciting, there was also a major frontal trough moving into the area and we wanted to put some serious miles between us and it. However ... I'm sure this will not come as a shock to anyone, but we had a few hiccups trying to get out of Dodge.

Our smiles could not have been any bigger as we watched the Puerto del Rey Marina shrink into the distance in our wake. Relaxing in the cockpit, we set a course that would take us along the south side of Culebra Island and we were happily motor sailing east. After a few hours, it occurred to us it might be prudent to take a look at our brand-new, drip-less shaft seal from Tides Marine and make sure everything was dry. Like everything else on a boat, first you have to the remove everything from the cupboard so you can remove the access boards into the compartment so you can get down on your belly and hang your head in. Drum roll please ... Our brand-new, drip-less Tides Marine shaft seal was dripping at a rate somewhat more than a drip per second ... Really?!? It is now after 4:00 PM on the Friday after Thanksgiving and no one is answering the phone at the boatyard, go figure! We decided to pull into Culebra for the night and give the boatyard a call the next morning. Meanwhile, the weather was being a bit contrary and not sticking to its predicted path -- over the next 36-hours we would formulate four different sail plans based on the latest weather. On Saturday we did a round trip between Culebra and Puerto del Rey, the consensus was "Yep, it's leaking, good thing it's a sailboat". For people who may not know, the shaft seal only leaks when the engine is running and the boat is in gear, but more on this story later.

We were finally able to set sail on Sunday morning around 8:00 from Culebra. I will save you the suspense, the sailing was fabulous, 3-1/2 days of clears skies, 3-4 foot seas, and a consistent 15 knots of wind mostly ENE -- it was just awesome sailing! We motor sailed east into light east winds until we got to the east end of St. Croix and then hung a right and turned off the engine. 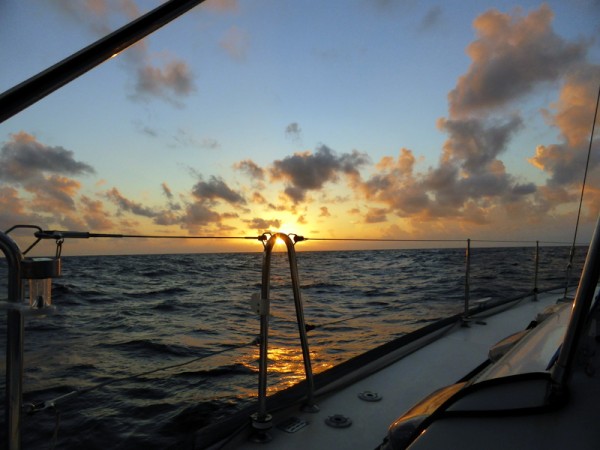 As night fell the winds shifted to ENE and began picking up -- awesome! We put a reef in the main, set our course and settled in for the night. Throughout the night we maintained a speed of 7-71/2 knots. In the morning, we were still making 7-7-1/2 knots so we left the reef in to balance our speed with our arrival time. We continued sailing in this manner throughout the day on Monday and into Tuesday zipping along at 7-7-1/2 knots. 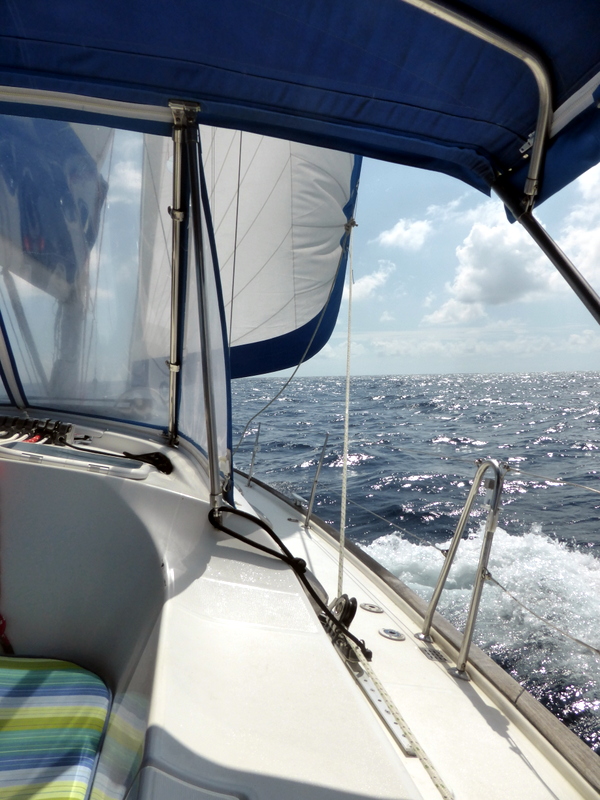 But nothing ever goes as planned, and the powers that be hate it when we get too sure of ourselves and have to put us in our place. Around noon on Tuesday (100 miles offshore) our head sail parted company with it's halyard and went for a swim. Our head sail is gigantic, a 140% genoa that is over 600 square feet in size. Getting the sail back on board was no easy feat and it took us about two hours to get the sail recovered and stowed. Both of us were soaked in so much seawater that it was amazing our PFDs didn't deploy. We had also managed to drag a fair amount of seawater throughout the interior of the boat. In our inexperience, we decided to stow the sail in the port cabin -- what a mess (I wish I had thought to take a few pictures). The sail wasn't even close to being folded and filled the entire cabin all the way to the ceiling. At one point, I feared I was going to be trapped at the back of the cabin. My overactive imagination was having a field day as it ran through many scenarios in which I would die in the back of that cabin, trapped by a huge, menacing wad of cloth!

We then continued on our way, now motor sailing again with our main fully up. While we were sitting there feeling quite glum a pod of dolphins came over to say hi and cheer us up, they hung with us for about half an hour. When I went below to make us our much overdue lunch, water was leaking out at the edges of the floor boards. I'm sorry to say that at times like these some not very lady-like words escape my lips, in this case it was "OH MY F^*K@$G GOD, WHAT NOW?!!!". Barry was up on deck anxiously saying "what, what?" Then the light came on 'oh yeah the shaft seal is leaking' ... sigh ... note to self, remember to run the bilge pump every hour ... sigh. 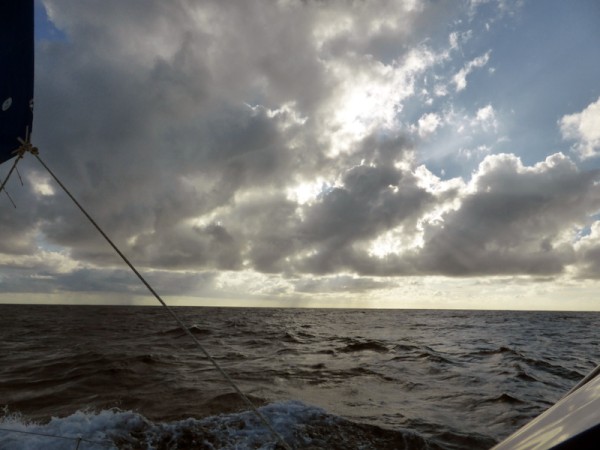 We pulled into Prickly Bay, Grenada around 8:30 in the morning on Wednesday. It is good to be back!
More
Comments
Newer Older
Contents