Mr. Point A to Point B Tacking is not something that comes naturally to Barry, I guess it is kinda like being in rush hour traffic for him -- he just has no patience for it. I, on the other hand, have endless patience, in these kinds of circumstances, I just turn up the stereo and sing along. I do have to say, in all fairness, that Barry has developed GREAT patience (in general) since we started this adventure. For instance, at the grocery store (or any retail outlet) -- me (Miss Endless Patience) goes nearly bonkers while Barry is just chillin' (or limin' as it is known in the islands) waiting for the slo-mo cashier to get around to HIS turn. Anyway, tacking is not something we have done much of since arriving in the Caribbean nearly three years ago. Normally, we wait for the 'right' weather window which has the wind blowing in the right direction to get us from Point A to Point B. If, after we set off, the weather is not what was predicted (and that happens a lot!) we just turn on the engine and motor sail to our destination -- I guess we have gotten a bit lazy.

We have had the honor, this season, of buddy boating with sailors that have challenged us to become better sailors -- Donna and David on s/v Merlin (a Beneteau Oceanis 473) 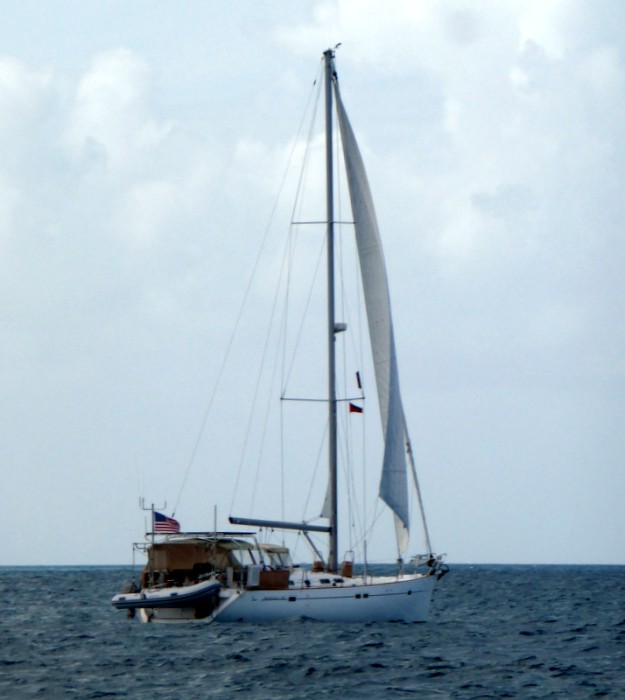 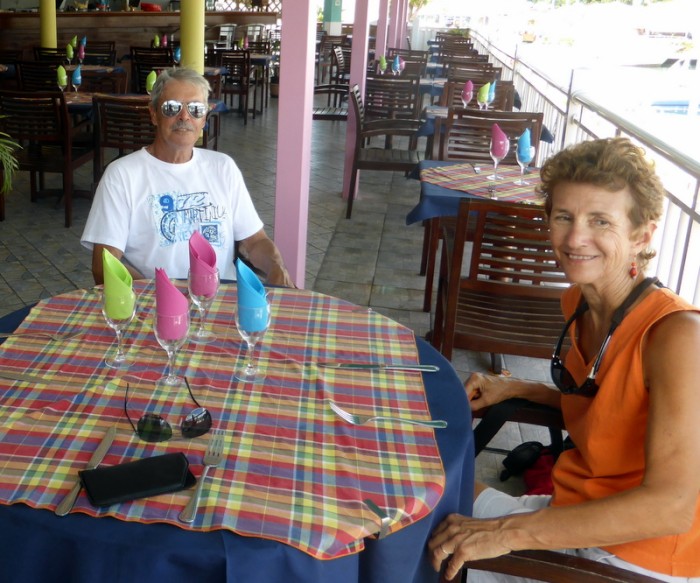 and Jim and Sharna on s/v Second Spray (an Island Packet 40). 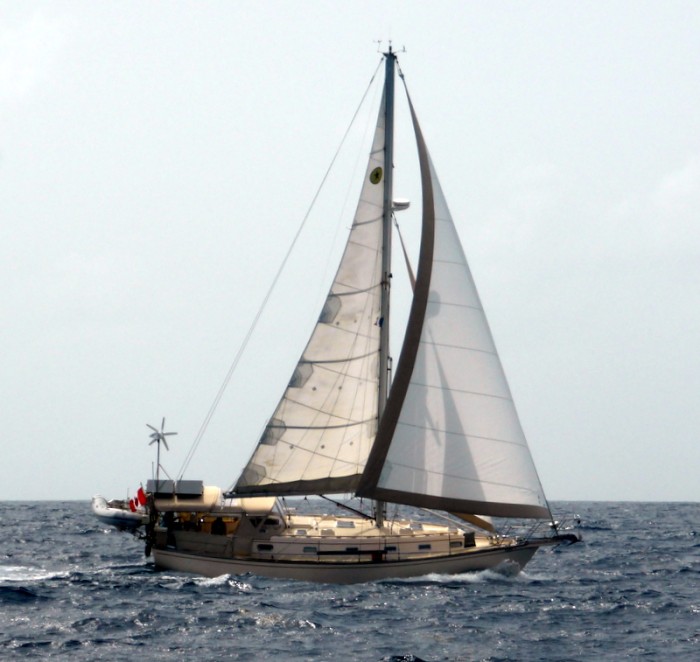 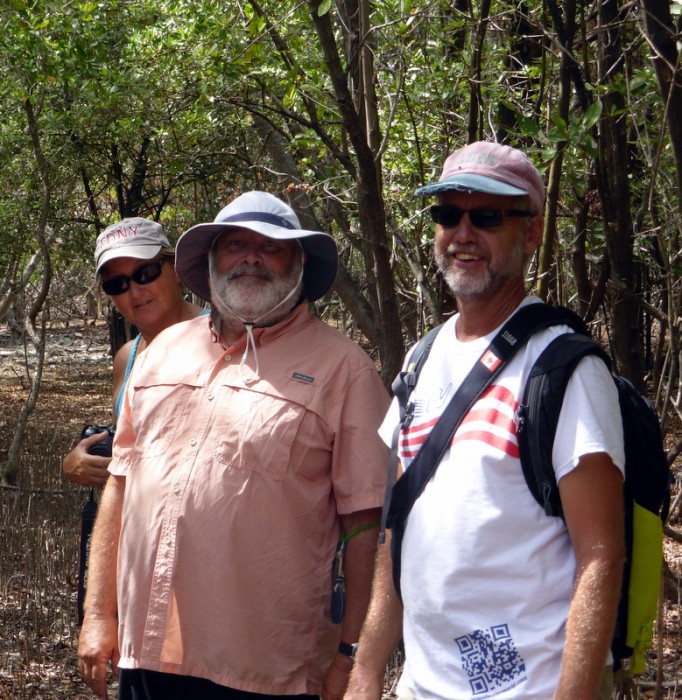 While traveling up island with David and Donna, tacking was not really an issue as the winds (for the most part) were working with us. What we learned, by the seat of our pants and the help of the crew on s/v Merlin was how to make it through (to us) heavy weather (30+ knots) sailing. I know this may be shocking to most of you, but we came into this adventure with A LOT of book learning in heavy weather sailing but not much practical experience. We have had a few years to figure out how much sail we need in different situations, but I think we may have scared Donna a bit when we carried our full main and huge (140%) genoa into some of these situations. David (a former sailboat racer) also tried to impress upon Barry the importance of taking charge of the helm while under sail. However, even with all of David's urging, Barry persisted to defer to our autopilot, Sonny. This can get a bit exciting, as Sonny is slow to respond, especially when the winds are over 30 knots!

Traveling down island with Jim and Sharna, both very talented sailors, has been a very humbling experience. On every level we should have just smoked Second Spray -- yeah, well not so much! The blame had to be taken by the crew of s/v Smart Move and not by the boat herself (she tried to tell us what we should do -- we just didn't listen). In our continuing effort to get from Point A to Point B we were slowing ourselves down by trying to sail too close into the wind, all the while I was working really hard to keep the unhappy sails trimmed but to no avail. Meanwhile, Jim and Sharna would just throw a tack into their course (adding more miles) and beat us into the anchorage nearly every time. The only exception were the rare days when we were sailing on beam or broad reach, with our extra length, fin keel and big sails we could carry 8.5-9+ knots of speed to Second Spray's 7.5-8 knots.

Coming down the lee of Martinique the wind was just straight on the nose -- our day of tacking reckoning was upon us. The only way to get where we wanted to go was either to motor the entire way or start adding tacks into our sailing plan. Not wanting to look totally inept we raised the sails and plotted a waypoint for our first tack. At this point, maybe motoring would have been the better part of valor -- at least we would still have our dignity! That first tack was not a pretty sight! It seemed as if everything that could go wrong did. Both of us (more than a bit rusty on the execution of this skill) mishandled our respective sheets, we managed to get the clew of the sail hung up on the baby stay which resulted in a tug of war between Barry and myself as we tried to free the sail, then Sonny (in auto-tack mode) went crazy turning us so that we back winded the sail before he swept us in a perfect 360-degree turn!

The first day, from Ste. Pierre to Fort de France, the wind was blowing 19-22 knots. Once we got ourselves sorted out after our first tack the rest of the day went quite well, we reached Fort de France in three tacks -- not too bad. 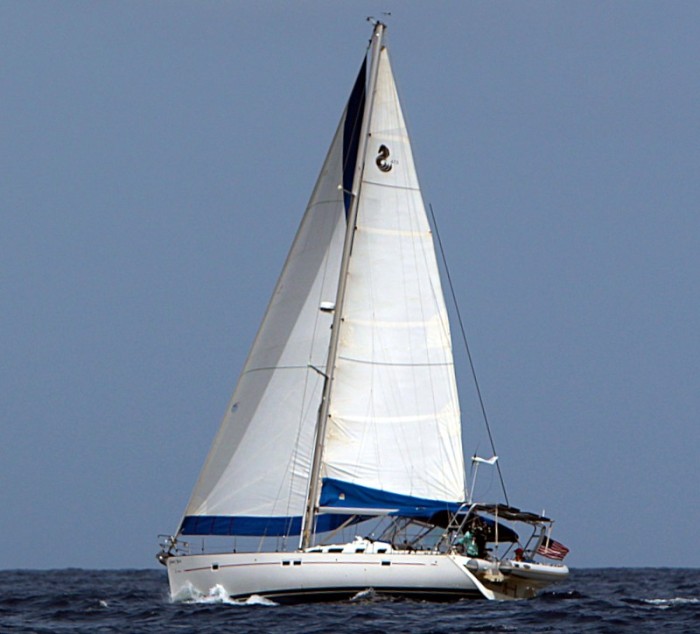 The second day, from Fort de France to Ste. Anne, the wind was still on the nose but was now blowing steadily in the 20s. It was really hard making any progress, for every mile toward our destination we sailed six miles in a less than optimum direction and our 11-mile trip turned into nearly 60 miles. As the day progressed the winds kept picking up, the low 20s, mid 20s, high 20s and we kept tacking. By the sixth tack the wind was blowing 30 knots, we were practically sailing on our ears we were heeled over so much, all the while gallantly dodging lobster pots, and we were EXHAUSTED -- we had been sailing for close to seven hours. With three miles still to go and the prospect of at least two more tacks, Mr. and Mrs. Point A to Point B threw in the towel, dropped the sails, started the engine and motored into Ste. Anne! 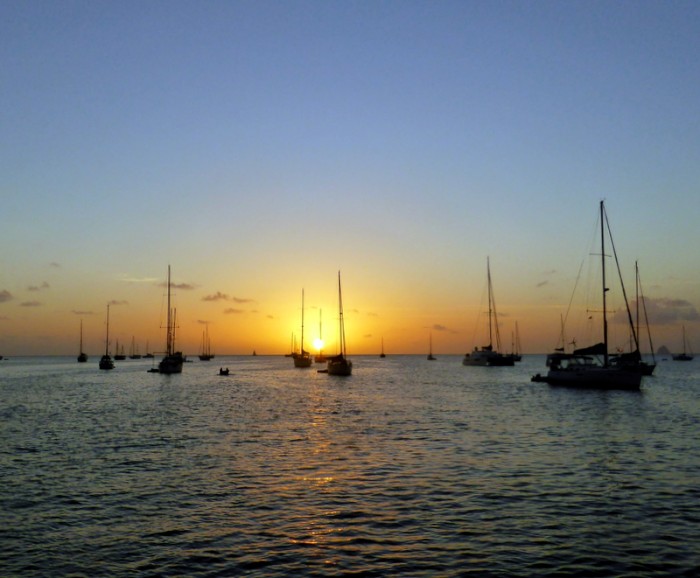