20 June 2015 | Fakarava-South Pass
Steve
Just finished my first dive, this year, in the South Pass at Fakarava this year. It was spectacular as always. The wx has laid down with 4-5 knots of wind out of the NE today. Kim, had another equipment problem as always when diving this pass. Interestingly, when I crawled back in the dinghy I told Kim that there were only about 80-100 sharks during the entire drift dive. Last year we estimated easily 400-500 that you could easily see, probably just as many off in the shadows. Maybe it's a time of year thing because we were here much later last year. I saw several that appeared to be pregnant and one that had his dorsal fin bitten off. Also, saw a fish behavior I've never seen before. A large green moray eel kept head bumping this 8-10 pound grouper. He'd butt him in the side several times and push him off the entrance to his hole. Then the grouper would just drift back sideways over the hole. Wish I'd had the Go-Pro but didn't since I was by myself and towing the dinghy.

Anyway, an awesome dive. Hope to repeat it tomorrow. Oh yeah, Happy Fathers Day to all the dads out there.
More
Comments
Newer Older
Contents 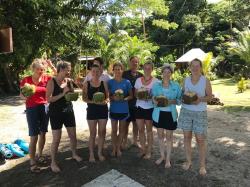