Here There Be Gremlins Old English maps are reputed to have had the phrase "Here there be dragons" marking certain unknown or unsafe places in the emerging world. We haven't run into any dragons along the way, but for sure, here there be gremlins. We have a serious infestation which has quite literally stopped us in the water. Our triumphal departure from Port Vila over two weeks ago was short-lived. We had to return after barely a week out, most of it spent locked in combat with quickly multiplying and mutating trouble-makers. And more than a week after returning to the dock, we're still here. Even as I type, Jim is once again pretzeled into a small space trying to figure out what's going on with yet another malfunctioning gizmo.

When last we left off we were trying to leave from Havannah Harbor and work our way a little farther north, to the island of Nguna. We did eventually get up there to the lovely bay on its northern end, dominated by a small dormant volcano peak. A dramatic reef--much bigger than we first thought when we arrived--emerged from the shore as the tide receded. 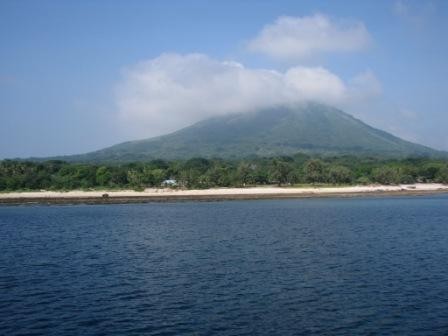 It was a beautiful day, and time for a snorkel, so we hit the water and as we always do, checked out the anchor first to make sure it was securely dug in. It wasn't. In fact, not only were the chain and anchor sort of lazily draped over coral (which we try to avoid and hate to have happen), Jim noticed that we were hanging very close to a wall of reef that rose to within 6 feet of the surface. We needed to move, but it was OK while we snorkeled, and Jim scoped out a nearby sand patch to aim for when we returned. We were immediately treated to a school of about 25 huge bumphead parrotfish meandering and pooping their way through the reef gulleys and fissures that had the look of bygone lava flows or earthquake faults. 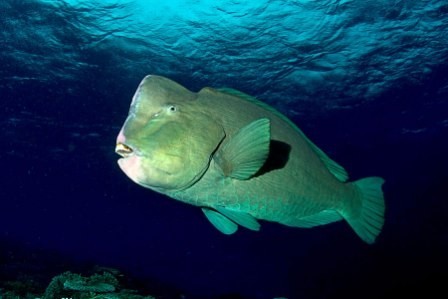 Imagine 25 of these swimming by!

Back on board, we raised the anchor and headed for the sand patch. When Jim hit the switch on the windlass to drop the anchor it started to go but quickly stalled. It would go up but not down. It's supposed to have a manual free-fall function, but that didn't work either. We motored around for a few a minutes while Jim tried to get it to go, but it was done for the day. Gremlin #5 had struck. (See previous blog for numbers 1 through 4.) We had no choice but to return to Havannah Harbor, where at least there was a mooring we could pick up since we weren't going to be able to drop the anchor. That was Saturday afternoon.

Sunday was spent disassembling and reassembling the windlass and by mid-afternoon, Jim thought he had it working again. The motor was going through the motions of going up and down, but when we actually tried to drop the anchor, it refused to go. The freefall part now worked, however, so we moved on Monday to another spot in the harbor that had better cell phone coverage (to be able to confer, if necessary, with a local mechanic) and let the anchor fall the old fashioned way with gravity doing the work. We'd been in this spot before so we knew the holding was good and Jim would continue to try to figure out what was going on. Turns out that on Sunday he hadn't gotten far enough into the guts of the machine to find the real problem. It wasn't the motor, but rather a badly damaged part (which functions as a type of clutch) deep inside the main shaft. In making that diagnostic breakthrough and removing the buggered up part, he rendered us even worse off: now the anchor wouldn't come up either. We was screwed. We had a 55 pound anchor at the end of 125 feet of heavy chain sitting on the bottom and only man/woman power to get it up.

Tuesday was spent on the phone trying to locate the part in New Zealand, Australia, the US, and ultimately successfully in Scotland. I quit saying bad things about the fancy phone Jim had purchased in the States that also, by some form of techno-magic, serves as a wifi hotspot in the middle of nowhere, so we were even able to get on the internet to help chase down a fix. By Tuesday night parts were ordered and we went to bed, somewhat relieved, but also totally stalled in the water. In the middle of the night, a boisterous squall blew through, with high winds that make anchored sailors nervous even with a functioning windlass. Had we dragged in the blow, there was nothing we could have done to move in a hurry, and we were finally forced to acknowledge that this gremlin had won. We was whupped. We had to go back to Port Vila to wait for the part.

Wednesday morning we faced having to haul up all that chain and anchor by hand. Jim had just stepped into the cockpit and declared, "It's gonna be a bitch," when a boatload of Ni-Vans pulled up to Asylum. We recognized several of them from previous visits and vegetable deliveries. 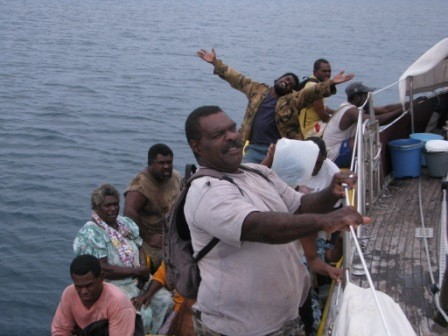 In his best Bislama, Jim told the group, "Machine blong anchor i buggerap!" (the anchor machine is broken). They didn't hesitate in offering to help and a bunch of guys leapt aboard and headed for the bow to haul in the chain. How does that saying go...? "Many hands make small work..." 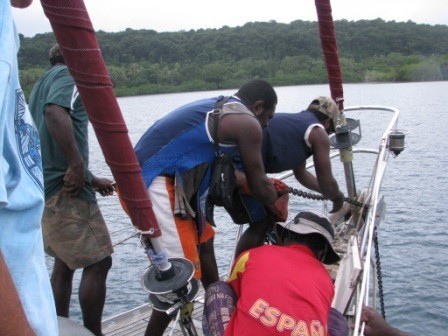 Even with all those hands it was hardly small work, but the anchor was finally stowed and we were loose. If not for them, we might still be there, huffing and puffing as we dragged that chain up inch by inch... Timing is everything. They had actually stopped by to ask for oil to mix with a soda-bottle full of gas they had for their outboard but what they did was well worth the 2 gallons of mixed gas and the bag of chocolates we sent them off with.

Back in Vila we started tracking the progress of parts and decided to tackle another potential problem that I'd been gently suggesting we should check out and Jim had been hopefully ignoring: the insistent and persistent clicking of the device that manages battery charging. Gremlin #6 had struck--"though we're not exactly sure when it actually infiltrated; we had just become increasingly aware of and puzzled by the formerly quiet "combiner" that slept under the quarter berth. Jim finally relented and hauled all the junk from that berth to be able to get at the buried batteries and their combiner. Two days of testing, head scratching, poring over manuals, cleaning connections, emails to tech support, and finally calling in a local expert who, in the end, suggested simply removing a tiny capacitor to shut it up. I asked it if was like Jim's gall bladder: originally there to serve a purpose but we could live without it? It's gone. The clicking is over. Gremlin 6 squelched. 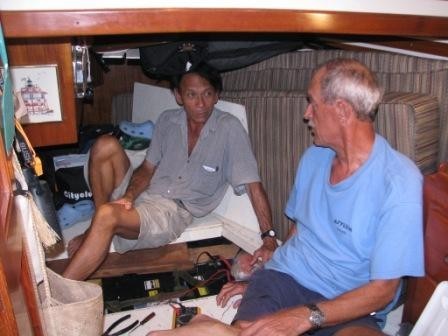 Meanwhile, the new membrane for the watermaker had arrived so Jim's next task was to extract the old one and insert the new. Easy, according to the manual. Except that in the manual there is no salt buildup and corrosion on the endcaps, making it impossible to get them off the way the book says. Fortunately cruisers frequent bars with other cruisers, where they all compare their woes and exchange ideas, tall tales, and tools. And fortunately that day, leaving a helluva mess and the stubborn membrane casing behind, we were kibitzing with four gnarly Kiwi guys and the chief engineer for a major fertilizer company in Florida. They all had ideas and the Kiwis had some useful tool, so leaving their beers on the table, 6 guys headed down the dock determined to prevail over auxiliary gremlin #5. They won. Old membrane out. 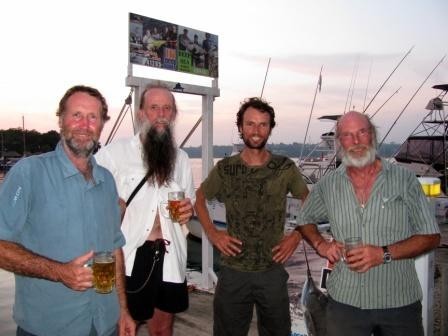 New membrane in. For at least the 8th time Jim reassembled the watermaker system and we fired it up. It needed to run for about an hour to purge the new membrane of its storage and shipping solution; after that we should be seeing readings of less than 500 on the PPM tester. Maybe even under 400! But after nearly 2 hours of flushing and purging and running, we didn't even crack 900. Hasty calls to west coast to confer with the tech rep. "Sometimes it takes a while. Let it run for a few hours." But Gremlin #7 was already at work in the new membrane, and after 5 hours the PPM reading never even made it as far down as 800. The tech rep said casually, "Sometimes the membranes are bad. We'll send you another..." We're now waiting once again for a new watermaker membrane.

Shortly after we arrived back in Port Vila our friends on the Nordhavn trawler, Special Blend, arrived from Australia. We'd said goodbye to them last year, figuring we'd be long gone when they got back to Vanuatu (but at that time we didn't know about Port Vila Glue) and were delighted to see them again. I'm not sure whether this gremlin thing is contagious or they brought their own, but they've had their own spate of trouble this past week, to include a fire in the engine room and the near death of their main generator. To help them out while they were powerless, we loaned them our little portable Honda generator and a "pigtail" plug to be able to hook it up to their boat. Jim Special Blend stuck the pigtail in his pocket as he headed back to his boat in the dinghy. But Gremlin #8 had crawled into his pocket as well, and as he arrived at his boat and reached to tie off the dinghy, the gremlin pushed the pigtail out of his pocket into 60 feet of dark water.

Yesterday morning was cooler than usual so I decided to fire up the oven and use some seriously overripe bananas that needed to go overboard or into banana bread. Jim lit the over for me (a get-on-your-knees guy task on Asylum) while I finished whipping up the bread. Our oven holds temperature reasonably well but not perfectly, so we always keep an eye on it when we bake anything. About 15 minutes into the hour, Jim checked the temp and groaned. There was no temp. Gremlin #9 had taken out the oven control valve, a necessary but temperamental piece that regulates gas flow and temperature. We'd had similar problems with these valves back in Panama and knew the symptoms well. When this happened before, Jim had taken out the innards of one of the faulty valves so the gas will flow but has no temperature discipline. Instead, we have to watch the temp even more carefully and fiddle with the dial to keep it close to where it should be. For all you banana bread bakers out there: it's very forgiving. The temperature ranged from 325 to 475 while I finished baking it and the bread was fine. But there won't be much baking on Asylum for a while.

It's now Friday and we actually had a fairly gremlin-free day today. Never mind that we're afraid to open anything or turn anything on...

Will we hold at 9 or break into double digits on the gremlin count?
Stay tuned.