If you've read the last two blogs you know we had something of an unexpected welcome to Papua New Guinea, but then, postcards here say "Land of the Unexpected," so I guess it lived up to the slogan. Since 8th grade geography, I always thought New Guinea was just about the most exotic place in the world, so even though it's off the standard cruiser track, visiting here has been high on our "intentions" list. I'm not sure if anyone reads these little history/geography "Welcome to..." digests, but just in case anyone does, here's a short primer on Papua New Guinea.

Another one of those South Pacific island nations that sits precariously on the Ring of Fire, PNG stretches from just below the equator to the northern tip of eastern Australia. 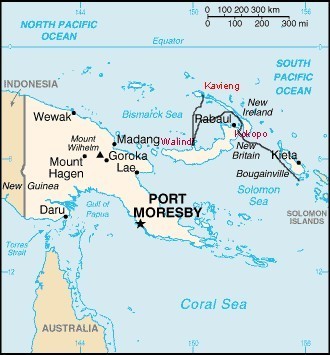 Papua New Guinea, with Asylum's route from the Solomons and around the islands so far


It has at least 15 active volcanoes and plenty of earthquakes. 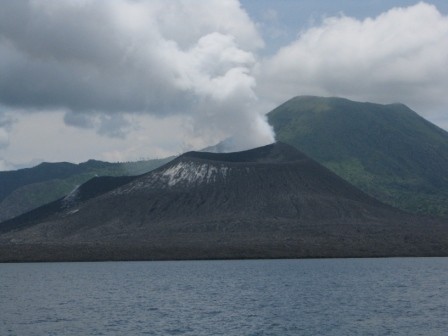 The still-simmering volcanoes near Rabaul


PNG doesn't have as many islands as the Solomons (only 600 or so) but they cover nearly a million square miles of water and when added up are a bit bigger than California. The main island of PNG is the second largest island in the world (Greenland is number one) and is shared with Indonesia on the west side. It has some of the wildest and most densely impenetrable terrain in the world with exotic plants and animal species (some still undiscovered), not to mention some of the most isolated people: in the 1930s a couple of gold miners stumbled across villagers living in the remote highlands who were as surprised to discover people other than themselves as the miners were to run into them. It was from PNG's main island that Amelia Earhart took off in 1937 and seemingly flew into the ether. There's been much buzz in the local press lately that her plane may, in fact, have been found near Bougainville, PNG's easternmost island. And there's even speculation that she was running gold...

Like the Solomon Islanders, the people of PNG are largely Melanesian. The vast majority still live in small tribal villages of a few hundred people with a largely subsistence lifestyle: gardening, fishing, weaving their houses from bush materials, and making babies. Even now, traditional ceremonies are still performed and PNG is one of the last countries in the world to use 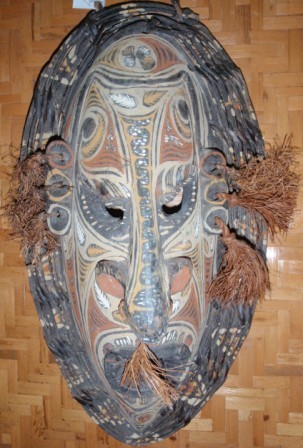 non-cash currencies. Men still pay bride prices in shell money and fines are levied in cash, shell money, and pigs. In a recent newspaper there was a story about a man who was sentenced to jail but "also he was ordered to pay 500 fathoms of Tolai shell money and K500 cash [about US$200] to the victim." Another article reported that "the Sagura tribe was penalized with K500,000 and 250 pigs...," a serious fine, indeed, as a big pig can run you K1000... about $US400. 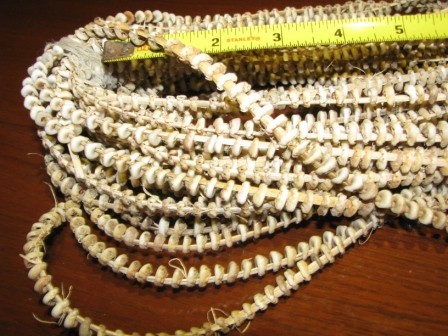 There are some 800 indigenous languages still spoken in PNG, more than in any other country in the world, and at least as many active "cultures." Central to Melanesian culture in general is the "wontok" (one talk) system. Your wontoks are the people who speak your language: your relatives, your clan, your tribe. From the moment you're born, you have the inalienable right to be fed, housed, and cared for by your wontoks but, by the same token, your wontoks have the inalienable right to anything you have or earn. You don't say no to your wontok, and members of a clan are fiercely loyal -- and usually beholden -- to their own. Petty jealousies abound (we've been warned to be careful about showing favor or giving gifts) and there's no such thing as a "petty" grudge. Payback's a... well, let's just say that obligations are taken very seriously here. Another recent article in the local paper reported that "Clan violence is widespread in PNG, where arguments over women, pigs and land can easily spiral into murder, mayhem and civil conflict." Land disputes especially are rife, may last forever, and can be over something as small as the boundary of a garden plot or as large as the location of an airport. Just recently it was a land dispute that closed the airport in Kavieng, where we are now, for more than 2 weeks when the "kastom" land owners brought operations to a halt by dragging trees across the runway until the government paid its overdue fees to them.

So, back to a bit of history. PNG got its name from two 16th century explorers, one who was reminded of Guinea in West Africa (hence "New Guinea") and another who was sufficiently struck by the local people's hair that he named it "Ilhas dos Papuas": Island of the Fuzzy Hairs. 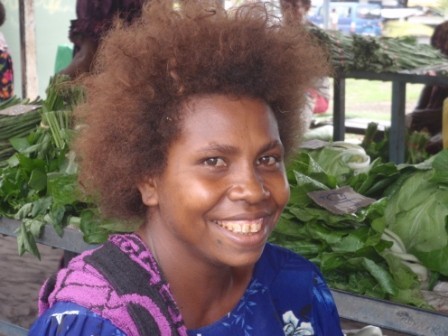 The country was known simply as New Guinea until its independence in 1975, when the two names were combined.

After the islands were "discovered," the usual parade of colonial activity moved in: plantations were planted, miners started digging, and missionaries corralled their new flocks. For a while, cannibals and mosquitoes had the upper hand making life in PNG a tenuous chore. The cannibals finally quit (though some sources say only as recently as the 1970s!?) but the mosquitoes are still at work (malaria is the major killer here). There were riches to be had, however, and the English, Dutch, and Germans (among others) squabbled over territory and carved the place up to suit their pursuits. The Dutch got the west (now Indonesia) for their Dutch East India Company and the English and Germans divided the rest until the Germans lost out in WW I and Australia took over.

And then came WW II. Like the Solomons, PNG saw heavy deadly action in the war. The Japanese took over Rabaul (which is more or less where we were when we were robbed) barely a month after wiping out Pearl Harbor and were here in PNG for the duration. Near Rabaul are extensive networks of tunnels carved deeply into the hills, much more sophisticated than the low clay tunnels we crawled through in the Solomons. Some were even big enough to hold barges. 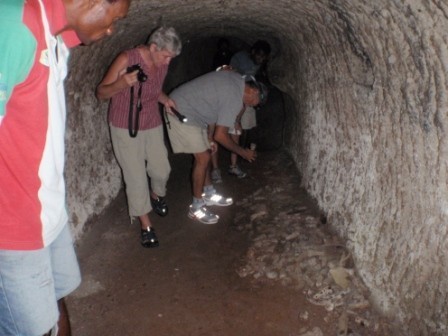 Examining bomb fuses in a Japanese underground tunnel near Rabaul

Japan's Admiral Yamamoto, who originally opposed war with the United States but then saluted smartly and designed the attack on Pearl Harbor, eventually had his headquarters in Rabaul, right under the volcano. The allies were anxious to get rid of this master strategist and, after breaking the Japanese code in the "Ultra" project, knew where he was headed and shot his plane down over PNG's island of Bougainville. Perhaps the most notorious of the PNG war campaigns happened on what's known as the Kokoda Track. Thousands of American, New Zealand, and Australian soldiers were wiped out -- mostly by disease and starvation -- in an ill-conceived and ultimately unnecessary march across the treacherously jungled main island to keep the Japanese from Pt Moresby, considered the stepping stone to Australia. (Jim just finished a page-turner about this campaign if anyone's interested: "The Ghost Mountain Boys" by James Campbell). Today that track is an "extreme" hiking adventure for tourists.

After the war Australia was pretty much in charge, both economically and politically, and continues to have a heavy hand in both even now, 35 years after PNG gained independence. But independence never comes easy and PNG has had its share of problems: land disputes over mineral riches, a bloody civil war with a secessionist province, border disputes, political scandals, crippling corruption, and volcanoes wiping out provincial capitals. Persistent tribalism and the deeply entrenched wontok system don't help. Malaria is not getting better and HIV/AIDS is getting worse. But, everyone has a cell phone!

That was a little like presenting US history as the pilgrims landed, there was a revolutionary war, then a civil war, and now here we are with iPhones. But now you can spin the globe and find PNG! The longer we're around these marvelously interesting, complex cultures, the more I realize how little I know and understand and the more I kick myself for not taking more classes in anthropology, history, sociology, musicology, developmental economics, etc. etc. For now I stumble along like something of a kindergartner trying to learn and appreciate what we're seeing. Even visits to the grocery store can be fraught with experiences we don't begin to fully comprehend. Our rocky start notwithstanding, we're very happy to be here. The people are friendly and pro-American, always amazed and even a tad grateful that that we've sailed so far to get here. 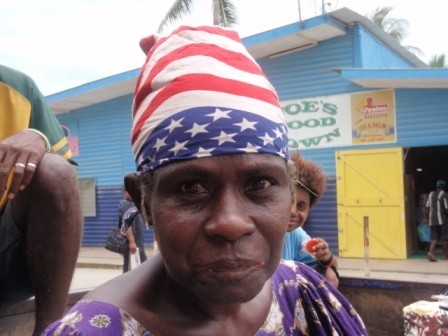