I never read Milton so don't exactly know what Paradise he thinks was Lost, but I'm sure he would be happy to know that a little corner of paradise still exists in the Hermit Islands of Papua New Guinea. It's been 6 months since we sailed away from the Hermits, but our too-short visit there remains a highlight of our voyage.

The Hermits are little blips of islands - I'm not even sure how many there are...maybe 6 or 7? - dotting the Pacific about 150 miles north of PNG's main island. There is one small village of about 200 gentle SDA (Seventh Day Adventist) souls on the largest of the group's islands, Luf. It was our last stop in PNG on the way to Palau. We thought we'd be there a couple of days, stayed 10, and would have stayed longer but for the lure of a good weather window to continue the sail north.

Like so many Pacific island clusters, the Hermits are ringed by a formidable reef with narrow passes that the prudent sailor only negotiates in good light. We were timing our arrival for morning light but with the help of a generous following current on the route from Kavieng we arrived at the pass at the end of day 3 rather than the beginning of day 4. We still had enough light to clear the deep water cut and then wound around several more miles to the anchorage off the village, which we discovered was either very deep or scarily shallow. Enoch paddled out as we circled like a dog looking for a comfortable spot to snooze and directed us to a safe place to drop the hook. (Check out that reef in the photo above!)

Later, during a stroll through the tidy little village, I asked Enoch if they had a store.
Yes, a small one, but only if a ship comes in.
When was the last ship here?
What month is it?
Late May.
Maybe... in January...? 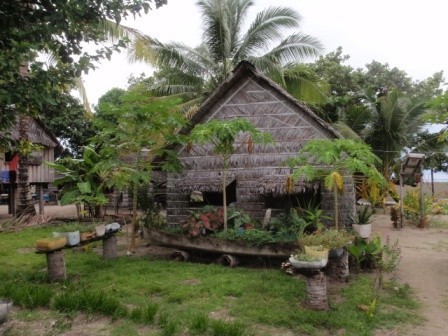 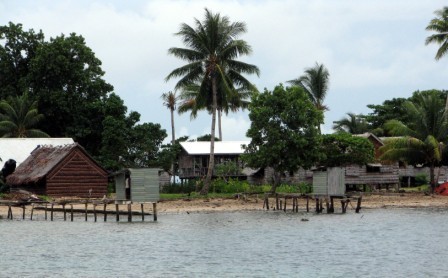 
Several outboard engines were mounted on stumps in the sand, as if they'd sprouted from seedlings poked into the ground to grow new ones. Outboards generally signify a degree of wealth and Enoch explained that the villagers collect sea cucumbers to sell to the Chinese for their seemingly insatiable appetite for beche-de-mer. Harvesting had been banned for some time, however, to allow the dwindling sea cucumber populations to replenish so there had been no collecting - and therefore no income - for a while. "But it's ok," he said. "I'm happy even when I don't have any money. I have my garden and I can catch fish." The outboards, it turns out, were all in for repair, and like the little store, waiting for the ship to arrive with parts. 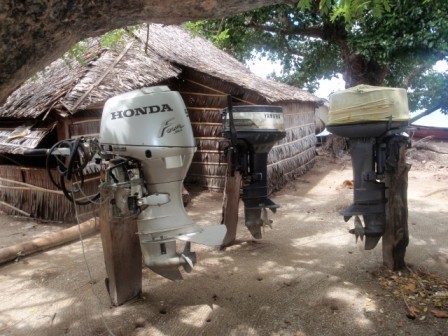 The villagers were immensely proud of their new church - a true labor of love slowly assembled over 14 years whenever a ship showed up with supplies. They built it without any formal plans, natural architects that they are, from timber they cut by hand from the surrounding hills. They were very grateful, however, for input from a "real" architect on a visiting sailboat who helped design the electrical/lighting system, all generator run, when the supply ship arrives with fuel.... On Saturday, the SDA Sabbath, we attended the Children's Graduation Ceremony at the church. Everyone was gussied up in their Saturday best and every child in the village was called forward to be officially promoted to the next level of Sunday, er, Saturday school. The graduating classes.
(Most of the kids and many of the adults are barefoot.)

The pastor, a diminutive little Leprechaun of a man (whose name was even McLean), was not a Hermit Island native but clearly carried a lot of stature in the village. We had saved a number of trade and gift items for our stop there and as we tried to figure out how best to distribute the stuff, the village elders all said, "Give it to the Pastor." But there are no secrets in these villages so after giving one old lady a pair of reading glasses the word was out and everyone needed glasses. We rooted around the boat, our bags and backpacks to extend our stock of specs and set up shop in one of the villager's houses. The old chief wasn't so much interested in readers as he was with a snazzy pair of sunglasses Jim had added to the giveaway pile. Every time we saw him after that he was sporting his new shades. 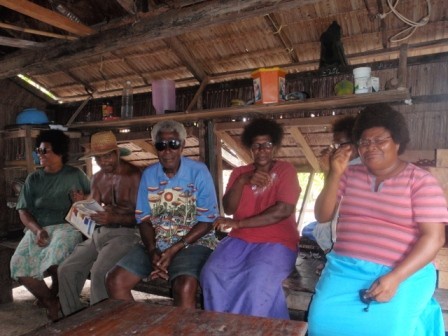 Happy customers at the optical shop

Another item on the give-away list was an electronic keyboard we'd been carrying around like a silent stowaway for 12 years. Never used. All my good intentions to practice long since blown away. It turned out Pastor McLean actually plays the piano so this was the perfect place to leave it, as long as the power hurdle could be cleared: the piano needed 110 power, their generators all produced 220. But Jim rummaged some more and produced a small transformer we didn't really need, so we left behind the piano, transformer, and a pile of sheet music for the village. The good pastor had already taught several of the village boys to play the guitar and was now signing up piano students. 
Even birds have a corner of paradise in the Hermits. About a half hour's boat ride from the village is tiny pristine Bird Island, home to boobies, terns, frigates, and others I don't recall. 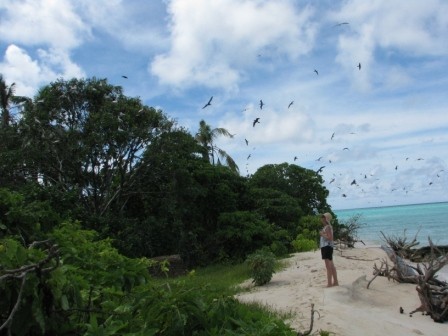 Katie tries to figure out who's who up there 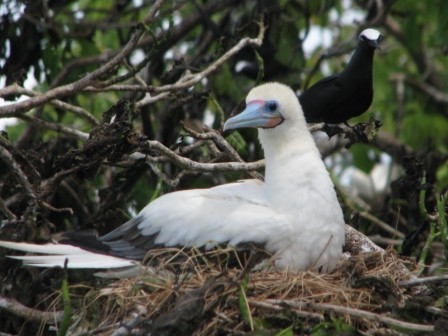 While we circumnavigated the island along its pristine beach, no-doubt annoying the birds along the way, Enoch and his crew built a little sun shelter for our stay (you can do anything with a bush knife!)... ... refrigerated the watermelons freshly picked from his garden... 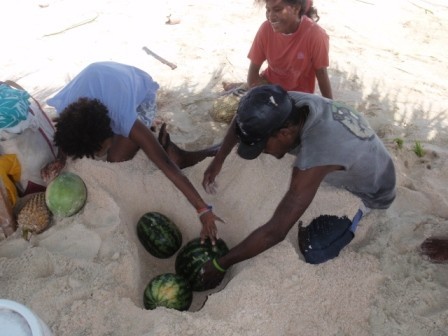 ... and fired up the grill to cook the day's catch. Meanwhile, we visited a densely jungled nearby island where the guys did a little crabbing... ...and came up with enough lunch for everyone. 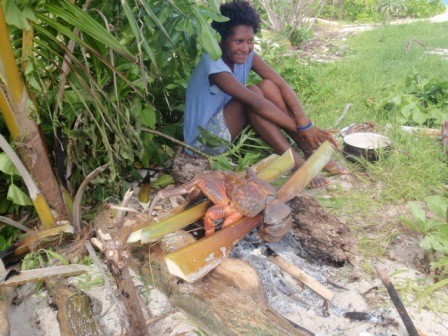 The villagers were incredibly generous to us during our stay. Not only were we daily lavished with more freshly plucked fruits and vegetables than we could ever eat... Sharing the bounty with our Aussie friend Al from sailboat Zeke


...the village ladies also delivered a fully cooked banquet to the boat (and then stayed and serenaded us with perfectly harmonized church songs). Dinner and entertainment arrive at Asylum

And as if all that weren't enough, the village threw us a feast as a farewell thank you for the piano. Grilled fish and all manner of local delicacies, most cooked in freshly grated and squeezed coconut cream, filled the table. We chipped in a couple of chocolate cakes, always a hit in these oven-less villages. After Jim sang for the kids... And the chief was there in his cool new shades... Namu, the wonderful mechanic; Al from Zeke; the cool chief and Jim


Even in Paradise we kept one eye on the weather to catch a good window for the eight-ish day trip to Palau. We were hoping to score a little more diesel for this second and longer leg of the journey, which would take us right through the windless doldrums, so Jim visited a small disabled fishing boat moored near us to see if he had any to spare. Sylvester, its sole occupant, had been towed in sometime in February, stuck there indefinitely while he, too, waited for a ship to arrive with parts. It wasn't clear whether anybody actually knew to send the parts he needed or whether he was just hoping they'd show up, miraculously, on a supply ship one day. We wondered if his family in some distant village had any idea where he was... He was able to spare about 4 gallons and was happy with the small amount of PNG cash we had left. And, well, was there any chance we had a 1 amp fuse? His GPS didn't work. Jim spent some time on the rattle-trap little boat, helped him diagnose and rewire the offending circuit, and left him with 2 spare fuses. A couple days later Sylvester paddled over to Asylum and shyly asked if we could remove some of the old movies from his flash drive and put new ones on it.

Flash drive??
From a dugout canoe??

Technology definitely had found its way even to this remote little outpost of Paradise. A bit like water, it seems electronic gizmos will seep in wherever they can. Sharon, the headmistress at the primary school, had a portable DVD player that she asked Jim to fix. Enoch had a small MP3 player that he wanted us to load with new music. Pastor McLean had a digital camera (I'm not sure where he puts the photos he takes; don't you need a computer for that?). Most of this stuff has come from visiting yachties like us who have a spare this or that to leave behind (we also gave them a cell phone to use when someone goes to the "big city"). But all these contributions do seem a bit incongruous in a village that has no electricity except from a community generator (when the supply ship comes with fuel) or wee solar panels attached to their thatch houses... ...where the women still haul water from community wells... ...and cook with hot rocks on an open fire. ... and many of their tools are, well, finely crafted from available materials... What was so remarkable to me -- and humbling -- was that none of this was particularly remarkable to them. They live contentedly as they always have, not opposed to modern stuff with bells and whistles but also not particularly covetous of it. An occasional dip in the gadget pool seems to be enough for them.

Perhaps what we have in these lovely people in this tidy little village in the middle of nowhere is really Paradox Found.