Where? you say. You thought the Inmates had long since sailed off the edge of the earth?

Not quite... But by landing in Palau almost 18 months ago, we did arrive at the western-most edge of Micronesia, the third of the Pacific's "-nesia" groups (Polynesia, "many islands"; Melanesia, "black islands"; and Micronesia, "small islands"). When you have your atlas or globe in hand, look carefully into the vast expanse of blue about 500 miles east of the southern Philippines. If you get to Yap, you've gone too far. Avid divers will know where it is. Palau is considered one of the top dive sites in the world, plunked down here in the middle of oceanic nowhere. 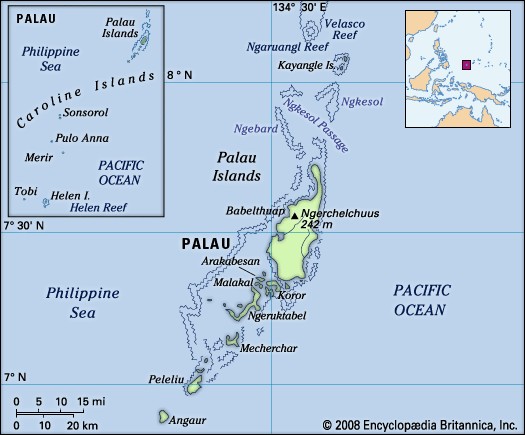 We arrived here in early June, 2011 after a relatively uneventful 8-day ride from our little nub of paradise in the Hermit Islands in Papua New Guinea (if you missed it, check out the "Paradise Found?" blog post). Most of the trip was a slow slog through the doldrums, starting from just south of the equator in PNG to our destination at 07* north, so most of the trip was a motorboat ride. It got so that we welcomed dark squally clouds on the horizon because they generally brought wind, even if only briefly. At about 5*N we finally found steady wind, often more than we would have wished for (like Goldilocks, we want our wind just right) but the quiet sailing was welcome after days of steady diesel engine drone. 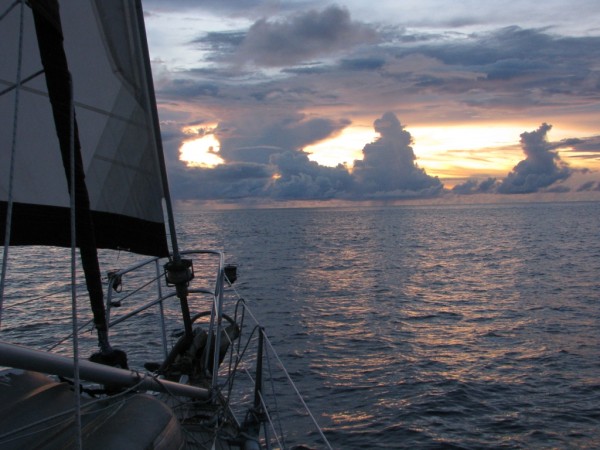 We waited for daylight to enter the long, reef-rimmed channel leading into Palau's commercial harbor where we had to clear in but it hardly mattered: it was raining so hard visibility was nil. The unforgiving channel was once well-marked but now you have to know how to interpret bare poles along the route. As for the rain, we now know that those conditions are fairly normal here, especially during the summer SW monsoon months. Our water tanks are always full.

As a country, Palau is both tiny and young. It's made up of more than 350 islands, only 7 of which are inhabited and many look not much bigger than green gumdrops tossed on the water. 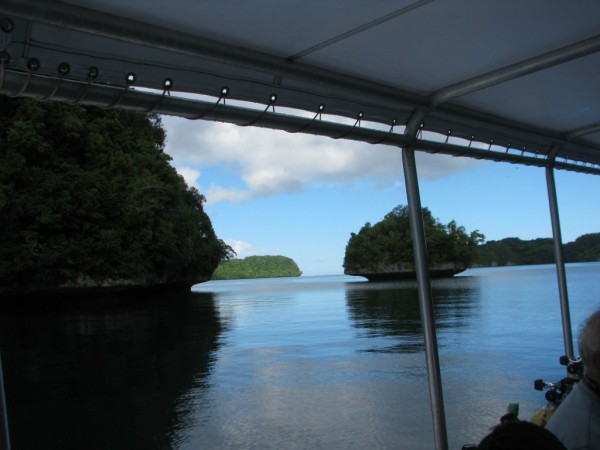 View from a dive boat

The entire land area is barely 150 square miles, about one-sixth the size of our tiny Rhode Island--and Palau has 16 states of its own. Most of the population of 21,000 live in the capital (and only) city of Koror. To our great delight there isn't a single traffic light in the land (though to get a driver's license you have to answer 3 questions about what they mean). The roads are right-hand drive but most of the cars come from Japan (where they drive on the wrong side of the road) so it's a bit odd being in a car. I still go to the wrong side. Perhaps they prefer the wheel on that side so that when the driver opens the door under way to spit beetle nut juice on the road they won't be whacked in the head by an oncoming car?

Before Palau was "discovered" by Spanish explorers in the early 1500s there were about 50,000 native Palauns (no one's quite sure where they came from originally) living in the islands in small clan-based villages. The village chief came from the most powerful clan. The culture is matrilineal and matriarchal. This may be one of the few places in the world where girls were considered more profitable to a family than boys: men paid a stiff price to their future in-laws for a bride. Women inherit land but it's owned by the clan, which can make decision-making about what to do with the land difficult. As in all the other island nations we've visited recently, land ownership is a big deal in Palau. Family and clans remain very hierarchical and a powerful force. Palau is about to have its own presidential election on November 6 and we've learned that you're pretty much expected to vote for your clan member, even if you think the other guy is better. 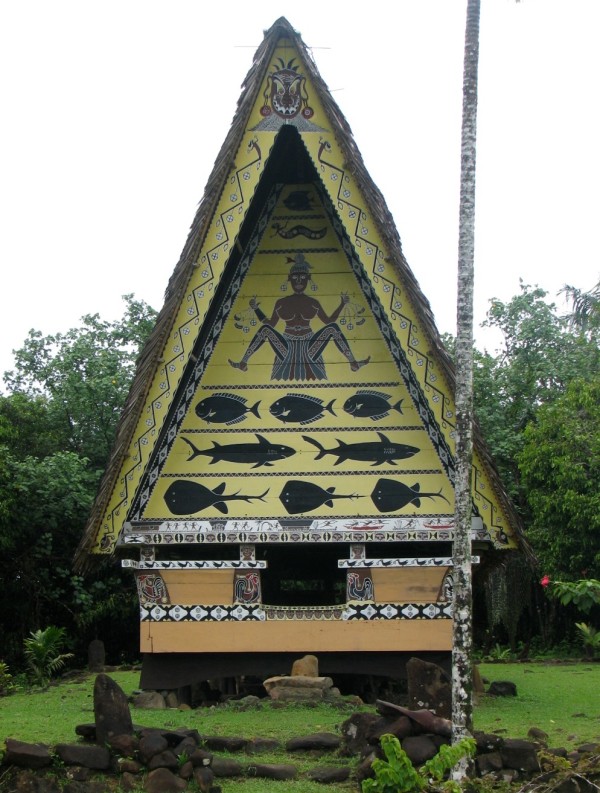 Despite sharing their women from time to time, the villages also apparently spent a fair amount of time at war with each other. I love the way one book put it: "In general, the men stayed busy with local warfare, head hunting and fishing." No doubt they fished from their war canoes...

Local warfare was particularly intense between the two High Chiefs of the land and it took a peace treaty negotiated by the British warship HMS Espiegle in 1883 to get them to stop bashing heads. Before the British arrived, the Spanish had claimed the area but didn't do much here except introduce Christianity and the alphabet. The British became Palau's chief trading partner for a while, even stirring up some of the inter-clan warfare and making things worse by introducing firearms. But then Spain kicked England out, later having to sell Palau to Germany to pay for the Spanish-American war. Germany then lost it to Japan, which lost it to the US in World War II.

For such a tiny place, Palau saw major action in the Second World War, primarily in the southern island of Peleliu. Japan was well-entrenched in Palau (and all of Micronesia) by the time the war started. In September 1944, after the US bombed Palau for a few months, a sea invasion was launched to clear the southern island of Peleliu of more than 10,000 Japanese troops and secure the airfield to make a Palau a stepping stone for MacArthur's return to the Philippines. The Peleliu battle was expected to take only a few days, but 3 hellish months later more than 8000 Marines and soldiers were dead or wounded in what has been called one of the most needless battles of the war. MacArthur, in the meantime, trudged ashore in the Philippines.

Peleliu is still riddled with WWII junk, a network of Japanese tunnels (one of them called "Thousand Men Cave"), and significant amounts of rusty live ordnance that's still being discovered (just before we visited, a fisherman had found ten 1000-pound bombs wired together and buried in the sand as a booby trap--all still alive). We've gotten to know the owners of a small bomb disposal business who have been working there for several years to find, identify, and destroy all the live ammo still lying around and spent a weekend with them exploring the tiny island's painful and overgrown history. The bomb crew accumulates piles of rusty old leftovers in sandbagged cubbies and then sets a date to blow it all up. 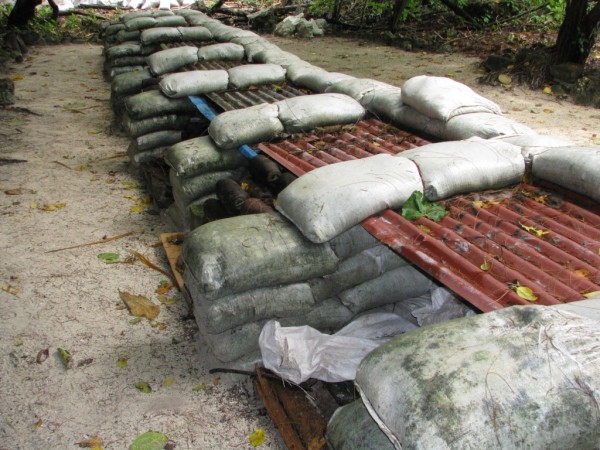 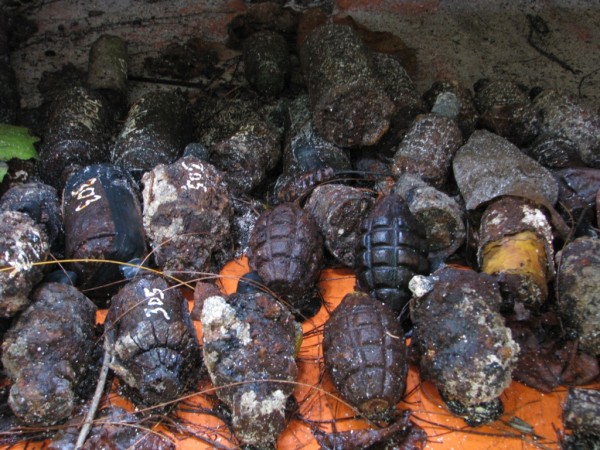 Old hand grenades waiting to be exploded for good

During the war, the island had been denuded of all its tropical greenery. In old photos it looks shorn and bare, as if it had been given a military buzz cut. Now, nearly 70 years later, the jungle is relentlessly working to hide any memory of the mess left behind. 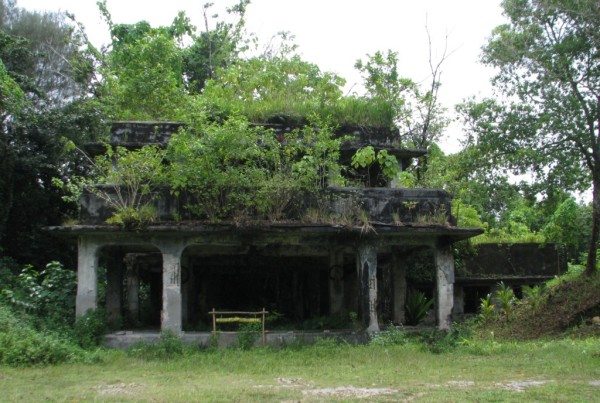 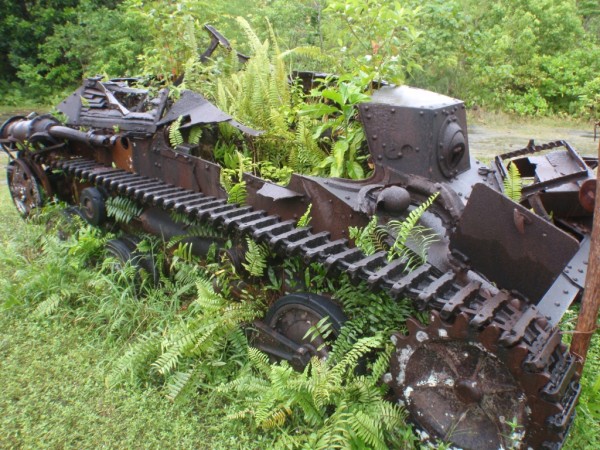 Japanese tank being overtaken by jungle 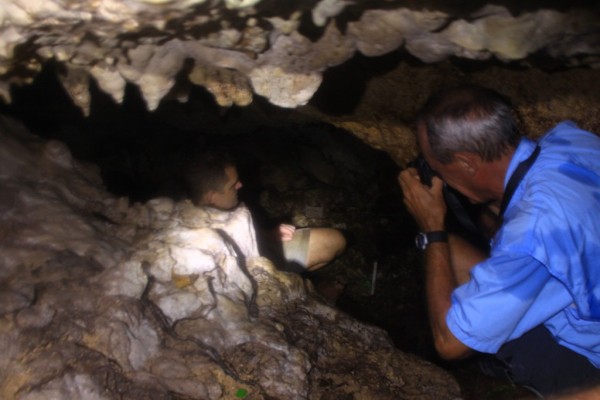 A recently discovered cave where remains of Japanese soldiers had just been found. The area around these excavation sites is carefully examined and cleared before anybody enters.


Between WW I and II Japan had "administered" all of Micronesia--some 2000 islands strung out across more than 2500 miles--and used the chain as its stepping stone across the Pacific. After the war, Palau and the rest of Micronesia became part of the Trust Territory of the Pacific, a United Nations trusteeship administered (and funded) by the United States. Over time, however, rumblings of independence grew and by 1986 the Trusteeship was dismantled and the island groups began going their separate ways. One group (the Marshalls) became a commonwealth of the United States; another formed the Federated States of Micronesia (FSM). Palau opted not to join the FSM, choosing to go the independent route instead. They became the Republic of Palau in 1994, entering into a "Compact of Free Association" with the United States. This means, among other things, that we provide money and their defense. The local currency is the US dollar and they also have a US zip code. The grocery stores are full of U.S. products, all shipped in.

As in the other 3 newly-independent countries we've recently visited, independence didn't come easily here either. There were 15 years of haggling and bloodshed over the terms of the new constitution, including whether to let the US bring nuclear-powered ships in. Palau's first (anti-nuc) president was assassinated and his successor committed suicide. The old traditional chiefs didn't like this new-fangled election stuff either so there was a bit of a tussle there, too. But money talks, and in the end the Compact of Free Association was accepted. On Oct 1 we joined in the celebrations of Palau's 18th birthday. We liked the greased pig-chasing contest the best.

Today Palau's economy is pretty much all tourism and that pretty much means diving. Google "world's best dive sites" and Palau will be on the list every time. It's dramatic diving: lots of currents and sharks and other big pelagic fish hanging out at corners in the reef when the current is ripping, looking for prey. When the currents are right, you hook on to the reef (otherwise you'll be whisked away) and fly like a kite watching all the action. 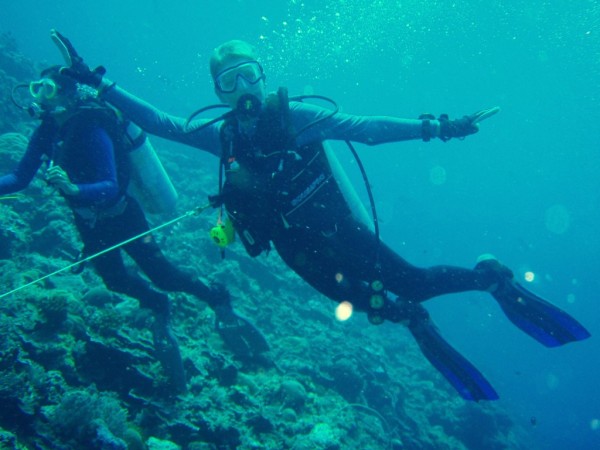 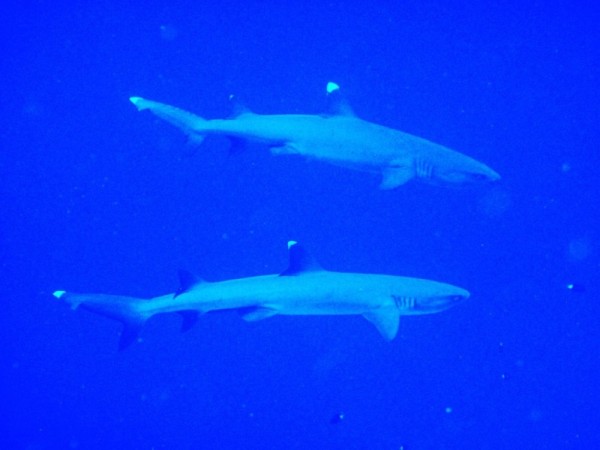 Palau had not been on our original itinerary (to the extent we had one), but it offered a safe place to leave the boat for a home visit. Because that visit became somewhat protracted, our "intentions" to head south to Indonesia were upended and now we're hatching a new plan, which will probably include a totally unintended return to the Philippines, where Asylum can get a much-needed haul-out and buffing up. I promise to be more timely in welcoming you to wherever we end up next!

(If the dreadfully slow internet cooperates, there will be a few additional photos in the Welcome to Palau photo gallery.)