I haven't exactly been the better--or more frequent--blogger that I promised to be, but my intentions are still good. To get back on track, I'll stay with the topic of tracks (as we call them) one more time. A recent blog (before Asylum went to the spa) showed our track so far, so the next obvious question after where we've been is where we're going: Where to next?

This is actually a topic of considerable discussion around these parts because Thailand is "something of a crossroads," as one of our cruiser friends put it. Just about everyone, including us, arrives in Thailand--the go-to place for boat work--with a long list of projects. It doesn't matter whether you started cruising as nearby as Australia or New Zealand or as far away as the U.S. or Europe; by the time you get here, stuff needs to be fixed. That's why Asylum is at the spa now.

But once the work is done, the question on everybody's mind is, Where to next? People you meet for the first time, before their names have even registered, will say, "So...what's your next destination?" I quickly came to realize there's more to the question than just idle curiosity or polite conversation-making. Lots of cruisers in these parts are wrestling with this issue and in asking the question, they are often looking for some combination of advice, information, confirmation, or a even a potential buddy boat.

If you're headed to the Mediterranean or the Caribbean or the east coast of North America, how to get there from here is a big decision these days. In the good ol' days of cruising it was easy: Up the Red Sea and into the Med, and then across "the Pond," if that's where you're going. But those pesky Somali pirates changed all that and getting from here to there isn't that clear cut or easy anymore. It got me thinking about just what the options are. As I see it, there are eight:


1. Up the Red Sea to the Mediterranean
This was the route of choice for (mostly) everyone trying to complete a circumnavigation in Europe or the U.S. You stop along the way and dive the pristine waters of the Red Sea, go on a safari, wait out sand storms, pay the necessary fees and bribes to transit the Suez Canal, and voila, you're in the Med! That is, until Somalia fell apart and disgruntled fishermen took up more lucrative seafaring work in the form of piracy. Most of their victims have been big ships--tankers and freighters with expensive booty (if you haven't seen it, check out the movie Captain Phillips)--but then they started picking on sailboats as well. After the capture and deaths of several cruisers from 2009 to 2011 this was clearly no longer the route of choice, forcing everyone to scramble for alternative options. But things are changing a bit, so it's becoming, once again, a potential route. More on that later.


2. Via South Africa, around the Cape of Good Hope
As the Red Sea route became impossibly dangerous, this alternative course, across the Indian Ocean down and around South Africa, dangerous in its own right, became the lesser of two evils. There's a northern route (from Thailand) and a southern route (usually from Indonesia), but either way it's 5000+ boisterous sea miles to Africa. 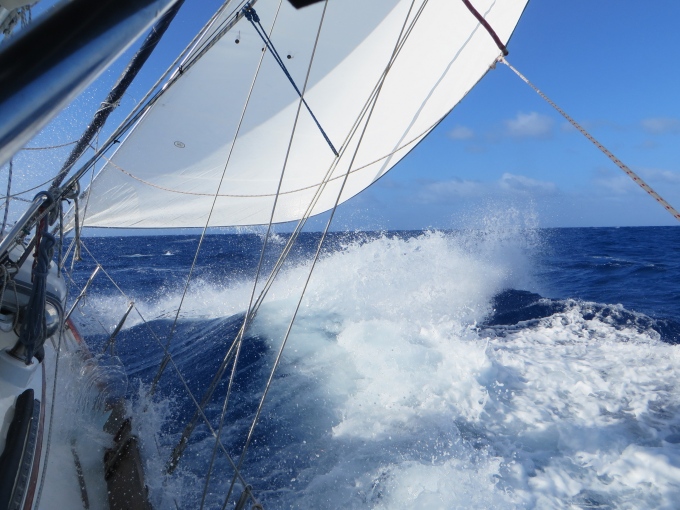 The view from 9 of Cups, our intrepid cruiser friends who took this route earlier this year.
The sky is blue and the sailing exhilarating, but those are big seas and that's a lot of water washing over the decks!


Many of our friends have opted for this route over the past few years and we don't know anyone who hasn't taken a bit of lickin' somewhere along the way. The rewards of arrival are immense, with all of Africa at your doorstep once you're there,. Most people take advantage and do some exploring while they're there. But unless South Africa is your final destination, there's still a long way to go to get to the Mediterranean or the U.S. The route to the Med usually involves a long tack to Brazil and then another long tack back to Europe. From South Africa to Annapolis, where we started this whole thing, is about 7000 miles. (Remember: we think Asylum is going fast at 7 mph!)


3. Japan to Alaska
We know five boats that have taken this route in the last couple of years and more who are planning it. It's a good route if your goal is the northwest U.S. or Canada. And if you like long passages. And the cold. And sailing in relentlessly strong winds, contrary currents, and big seas. In fog. 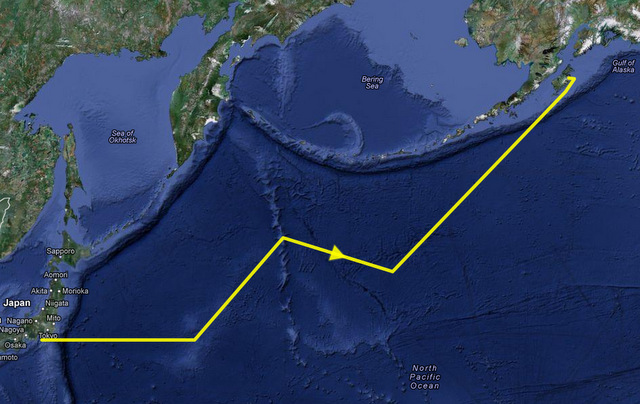 From Bosun Bird, who braved this option a couple of years ago: how to get from Japan to Alaska


People usually plan on a good 6 weeks at sea for this passage, depending on where in Alaska they intend to make landfall. And that can change depending on how much broken stuff you have by then, how far off course you've been blown, or how desperate you are for fuel. I like to think we have an adventurous spirit, but probably not that adventurous. It's a tough 3500-4000 sea miles. I greatly admire our friends who have laid this track!


4. Japan to Hawaii
We know of one boat that took this route and another that planned to and then went to Alaska instead (hard to believe that was the easier course!). Like Japan to Alaska, you take this one if you're headed to the U.S northwest, which is where the wind and current want you to go when you leave Hawaii. Except that the weather may be warmer, I'm not convinced this route is really any easier than the one to Alaska. The seas can be rough and contrary; technically you're going the wrong direction for prevailing conditions. It's another tough slog, but at least you end up in Hawaii!


5. Ship the boat from Thailand to the Med
Yet another option that that many are choosing these days is to put your boat on a ship, usually in Thailand, and then fly to Turkey to meet it there. Our friends' boat, Sabbatical III, waits to be loaded on her transport ship from Thailand to Turkey


This is a tempting but expensive way to accomplish the dangerous transit from Thailand to the Mediterranean. Depending on the size of your boat and the shipping line, the cost is $30 - 40,000+++. That is, plus the extra insurance, plus your airfare and lodging while the boat is in transit, and plus the costs of repairing the damage done underway. Besides being a real wallet-drainer, according to some purist circumnavigators, it's also cheating!


6. Go back the way we came
It is theoretically possible to turn around and retrace our steps, going back the way we came, but there's a good reason old trading ships and pirates and current day cruisers sail the direction we did: that's the way the "trade winds" blow. Going back the way we came would be a little like walking up the down escalator with a giant wind/wave machine blowing in our face. Like the other options, we know people who have done this but it can be a long hard slog. Best not to be in a hurry. "Wait for weather" would have to be your mantra.


7. Sell the boat and fly home
Judging by the number of boats for sale in the marinas in Phuket and Langkawi (another cruiser mecca just south of Phuket, in Malaysia), selling and flying is an increasingly popular option. When the others are too scary, too hard, or too expensive, I can see where calling it quits, leaving the keys with a broker and hopping a plane home would have some appeal. Boats for sale in a Langkawi marina


The downside of this option, of course, is that lots of boats on the market is good for buyers, not sellers. Your beloved home of many years will not fetch the price you know in your heart it's worth.


8. Make no decision and continue to cruise indefinitely in this area
That twirly red line on the map above? That's for this option. And frankly, for us at the moment, this one has the most appeal. There are still places to go and people to see in this part of the world. Indonesia gets great reviews and is rich with great cruising, village, and dive opportunities. We've just scratched the surface of coastal Malaysia and Thailand and we keep hoping that places like Vietnam and Myanmar will loosen their restrictions on cruising boat visitors.

All that being said, we're not getting any younger (especially Jim), and eventually we'll have to think about pointing the bow homeward. Which brings us back to Option #1, up the Red Sea.

We've been watching with great interest over the last couple of years as boats have quietly begun transiting the Red Sea again. The intriguing twist is that they're doing it with their own little micro-armies: guys with very big guns for hire who spend a couple of weeks on the boat with you as you pass that tricky area around the Horn of Africa where the pirates have been so active. You collect your little army and their arms in the Maldives and drop them off in Sudan. We're not quite ready to book a squad yet, but of all the options out there, even though it's less than ideal, this one has our attention. Several boats (that we know of) made it without incident earlier this year. More are going in the 2016 transit season (Feb-April). We'll call it "Option 1b, Up the Red Sea with hired guns," and keep an eye on it. Will keep you posted as well. In the meantime, if you want to read more about Option 1b, check out this story from one of the boats that took it earlier this year:

http://www.noonsite.com/Countries/Maldives/se-asia-to-the-med-in-convoy-through-the-gulf-of-aden
(If the link doesn't work, just copy the address into your browser.)

More soon, I promise. I'm still resolved to be a better blogger...