It was 17 years ago today that we became full-fledged, live-aboard boat bums on Asylum. As I noted in a previous blog, had you told us then that we'd still be here now I would have waved you off. But never say never: here we are, still afloat, still boat bums.

When this anniversary date dawned on me I saw the opportunity to combine it with our ongoing efforts to edit and organize our woefully messy photo collection and take a brief nostalgia tour. In slogging through thousands of photos we are reminded how lucky we are to have been able to live this life and see the places we've seen and how lucky we are to have met so many memorable people, both fellow cruisers and "locals," everywhere we've visited. We laughed out loud at some of the old pictures of us and were delighted to see old friends again.

So, welcome aboard for a short cruise down memory channel.


One of the things cruisers always talk about is the enduring friendships made along the way. Our "Class of '99"--those of us who left the east coast of the U.S. for the Caribbean in the fall of 1999 and met that first year--included a fabulous fleet of fellow sea-farers. Some, like us, are still at it 17 years later, scattered all over the world. Others have "swallowed the hook," as boat-folk say, and are now dirt-dwellers, and we've stayed in touch with a bunch of them.

Heading down the Intracoastal waterway from Annapolis, among our earliest friends were Don and Sue on Suzannah, whom we first met after a squally night in Virginia where just about every boat in the little bay where we were anchored dragged. Here we are with them in Savannah, November 1999--one of the earliest boat bum photos of us I came across. We saw them again a couple of years ago at an impromptu reunion of a few members of the Class: formerly of Suzannah, Serenity, Pelagic, and Windborne. All but Asylum are now dirt-dwellers. When we set off, Jim shrugged off 30 years of Navy rule and let his hair grow. His squirrelly little pony tail got this far before he lopped it off in Venezuela in 2001... ...to the hearty approval of the two old ladies in our home stay in the Andean town of Merida where we did a Spanish immersion course. When he returned from the barber without it, Aunt Tata on the left with me and Gioa's mother on the right (whose name I can't remember) broke into applause as he came through the door, shorn and now respectable-looking. Since we were there, Venezuela has slid inexorably into political and economic chaos. I've wondered how those special people have fared, who offered such gracious hospitality, nurtured our fledgling Spanish, showed us rare Andean condors, and connected Jim with a surgeon who removed the painful bursa sac on his elbow. I hope they're doing ok.


In Panama's San Blas islands, one our favorite people was Puna BB, a diminutive great grandmother who didn't make very good molas and never said much but, as it turned out, had an impish sense of humor. In one of our many visits to her tiny island/home, I laid my sunglasses on the bench where she was working. I don't know what I was doing, probably visiting her ailing frail husband, Jim, inside their dark hut, but when I returned, she had slipped the oversized glasses on. 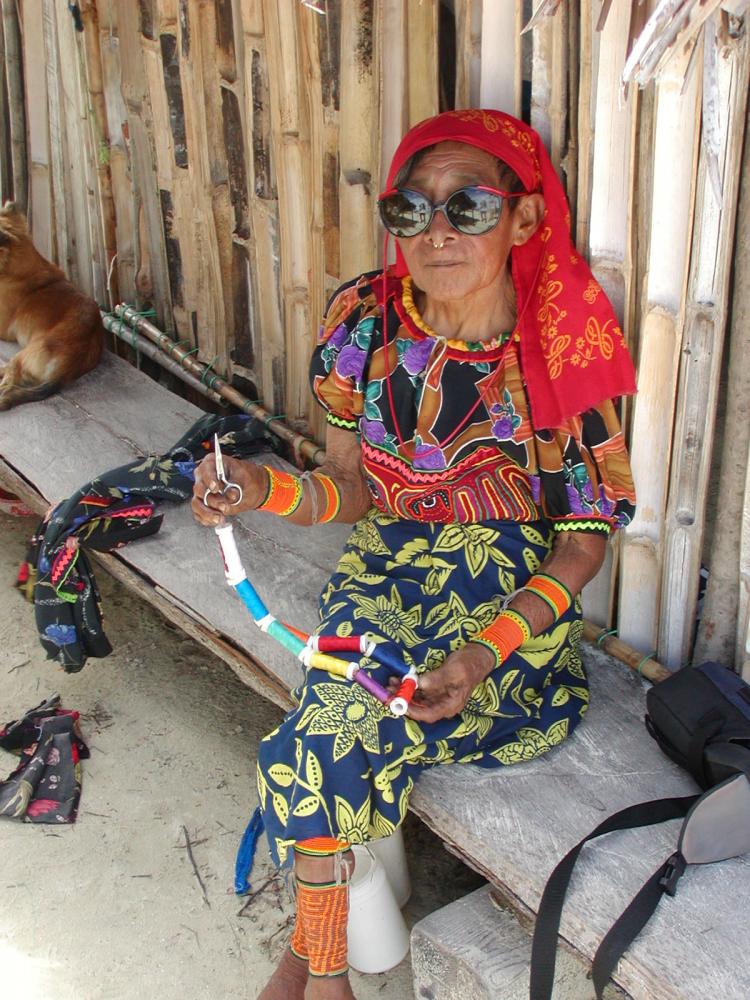 Jim, her husband, rarely left his hammock. He couldn't see much (despite the bright green glasses someone had given him) and could only walk with assistance. But he always seemed happy to see us and loved it when we brought him bottles of cold water from the boat. He spoke a few words of English and we spoke just enough Spanish by then to put together that he'd worked as a cook at a U.S. Army base in the Canal Zone a long time ago. 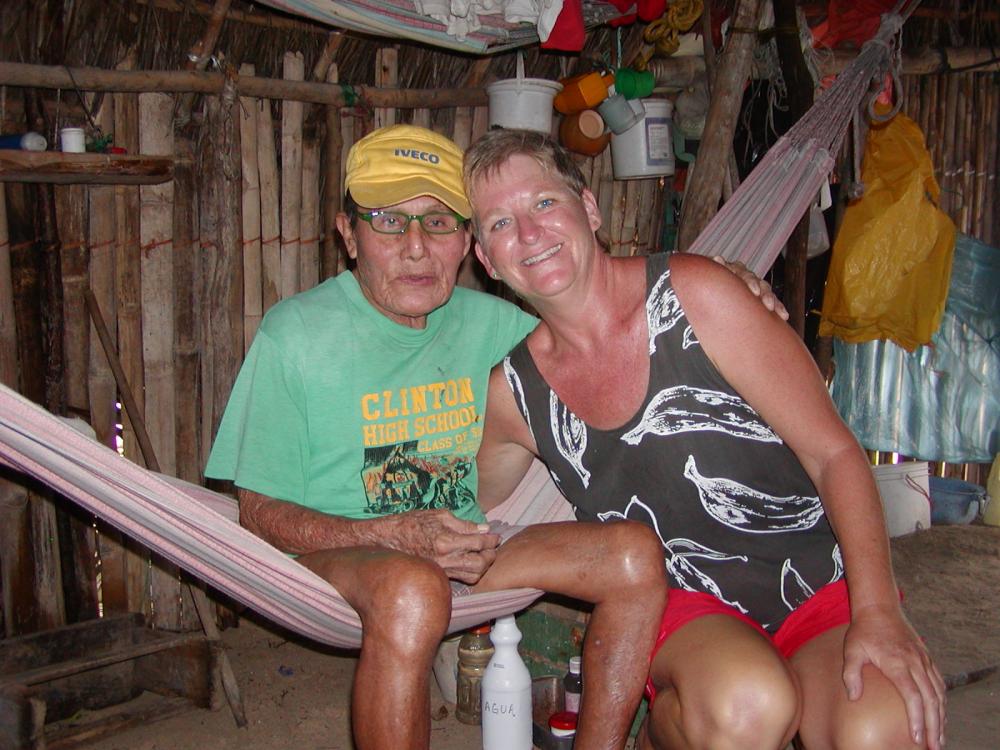 We heard that both Puna BB and Jim died a few years ago. Having been able to attend two Kuna funerals when we were there, I can imagine the family assembled around their hammock-borne bodies and then lowering her not-so-good molas and his favorite green glasses into their graves, where special things go with them to the after-world.


On the other side of Panama, anchored on one of the rivers in the remote Darien province, I wanted this guy's paddle and he wanted Jim's T-shirt, so everyone left the deal happy, except perhaps Jim, who went home shirtless. 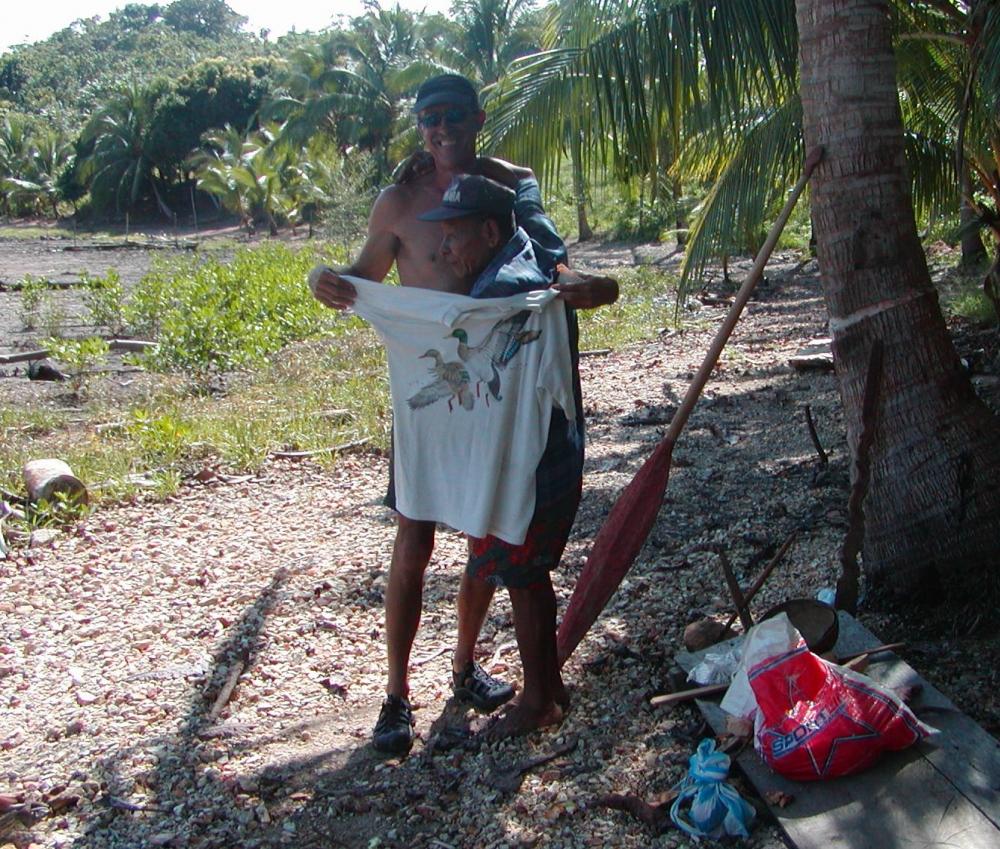 The Vava'u island group in northern Tonga was a hub for Pacific-crossing cruisers and we had the good fortune to be there with a talented group that rocked the place with two open mic nights at a local bar. The first was such a hit that everyone wanted a second. I was the Em Cee (which basically meant saying "you're next!" and holding a flashlight for people who couldn't see their music). Jim sang a couple of songs and also joined Hans, our wonderful Dutch friend from the boat Happy Monster, to sing a Dutch folk song that everyone loved. 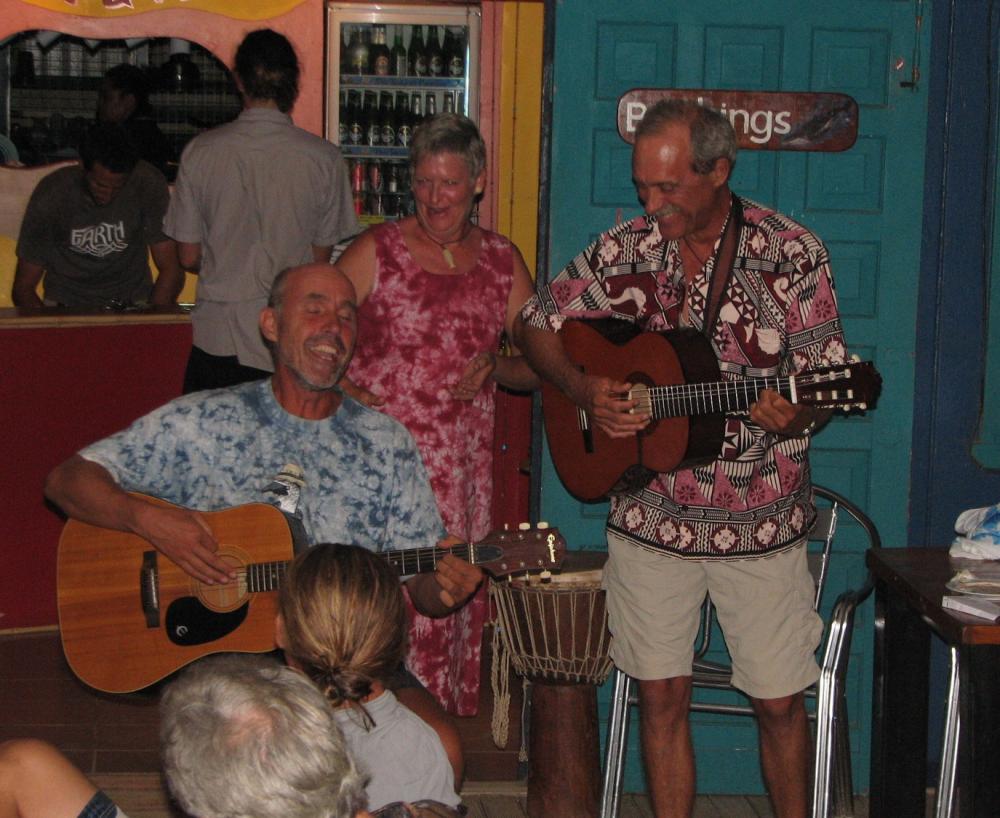 Hans and Dory have since swallowed the hook and are building a house on land that overlooks the sea in Fiji.


Vanuatu remains one of the most memorable stops in the voyage of Asylum. It dished up everything: eye-popping scenery above and below the waterline, earthquakes and erupting volcanoes, real-life anthropology classes, people whose generosity humbles you, kids who charm your socks off, spirits and black magic, and well, yes, even weasely government officials. It was terribly frustrating to be limited to a 4-month visa there. Among the many interesting people we met were these two guys from the mysterious Ambrym island where "black magic" was practiced and feared. Here they're dressed for an important "kastom" ceremony where men advance in hierarchical "grades" of importance. Sekor, on the right, is one of the highest ranking chiefs and working to restore kastom rights and traditions in Vanuatu. The other is Norbert, whose day job is a secondary school principal! 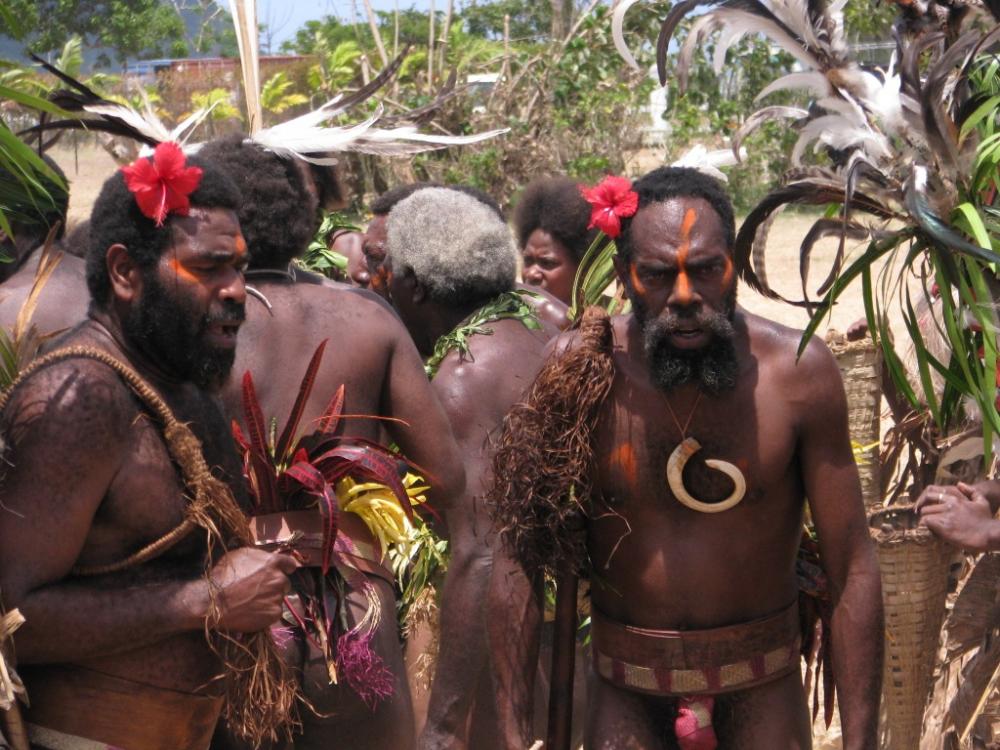 In Vanuatu Jim spent a fair amount of time being Mr. Fixit. He worked on this little generator under the hopeful eye of a lovely family who then shared their dinner with us. 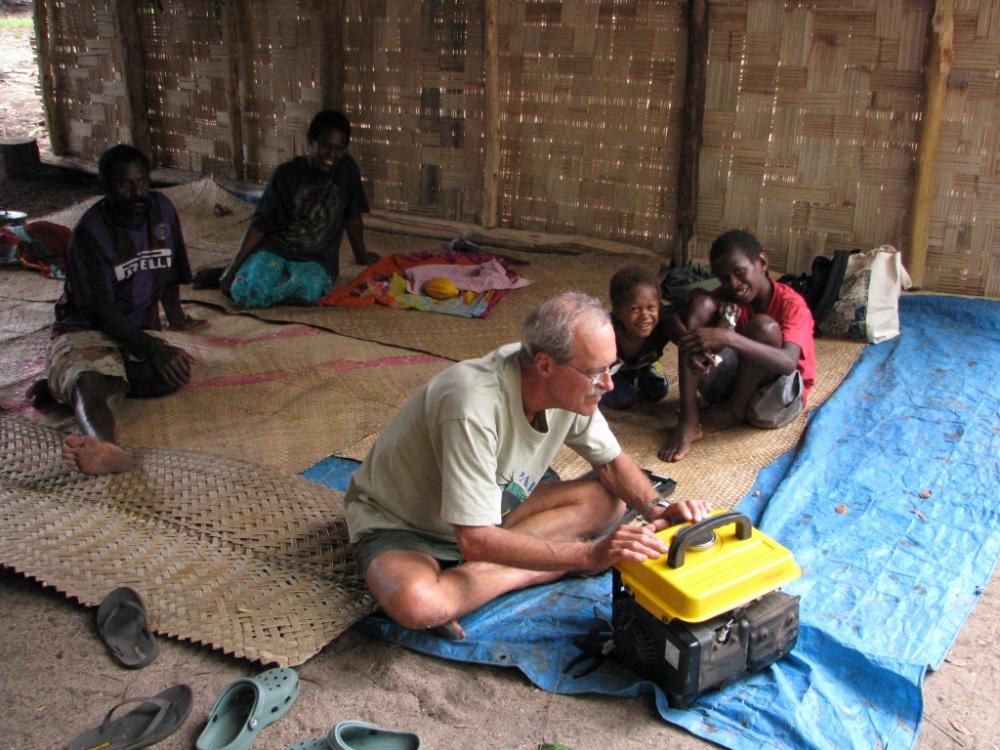 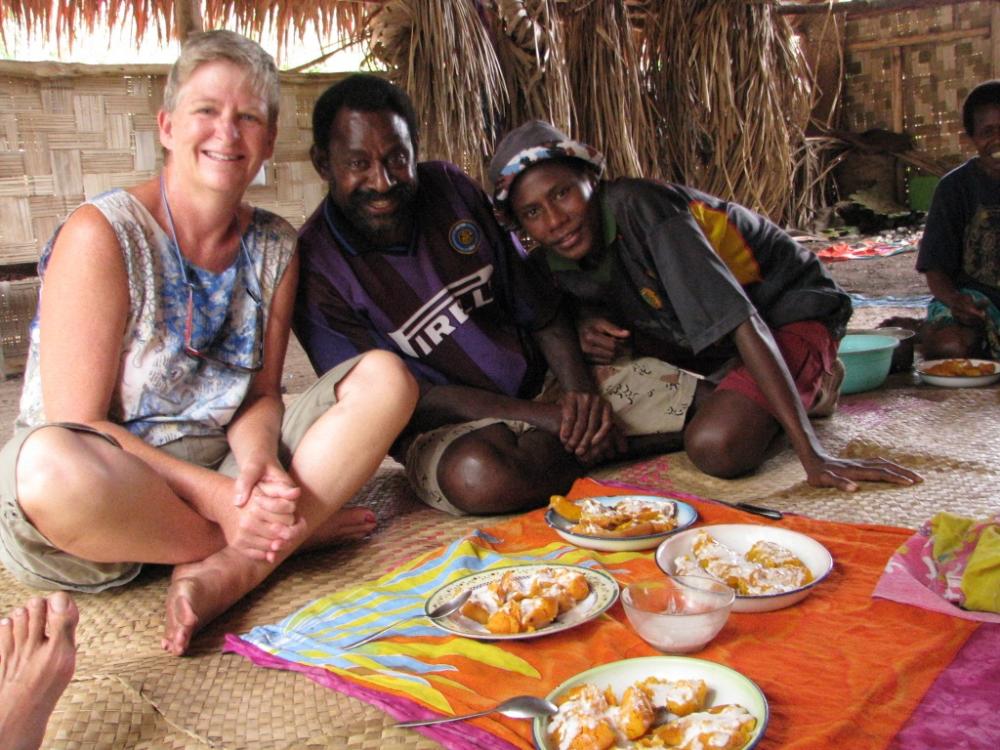 Last year poor Vanuatu, listed by the United Nations Institute for Environment and Human Security as "the world's most at-risk country for natural disasters," was pummeled by Pam, the "largest cyclone in recorded history to make landfall in the Pacific." It likely would have blown away many of the small fragile homes and villages we visited. The cruiser community there (to the extent they were still afloat) took to the seas and delivered supplies to many remote villages. The overall death toll from the storm was thankfully low but the recovery process can't have been easy given the isolation and remoteness of so many places--which, ironically, is one of the things we liked best about them.


Sailing to the Philippines more than 20 years after living there we found our old house in Manila... ...but even better than life in a gated community, we found people and places you'd only see from a sailboat. (No clue what makes their little make-shift raft float!?) In all these years afloat we are most grateful for enduring good health, although we've managed to have a few medical issues in exotic places along the way: I had my first-ever root canal in Raiatea; Jim had surgeries in both Venezuela and Borneo, and was med-evac'd from Vanuatu for another in Australia. He came close to lopping off the tip of his finger with the anchor in northern Thailand. Does this nurse look like she's 14 or am I just getting old? For the last couple of years we've done more city hopping than actual island hopping, which I do miss. But when you land in a place like Penang in Malaysia, where we are now, the benefits of city life can be seductive: great local markets full of exotic stuff, western supermarkets full of familiar stuff, even the occasional classical music concert. You don't have to go too upscale though, and Jim maintains this is what a hardware store should look like. He always finds what he needs at this jam-packed gem on "Cheapside Lane," his favorite shop in Penang. It's now July 17. Like the last 17 years, these last 17 days have flown by and as usual I'm behind. Just to round things out, though, since we started with a "before" shot of us from 17 years ago, I guess I should end with an "after"--or least one that bring things up to date: 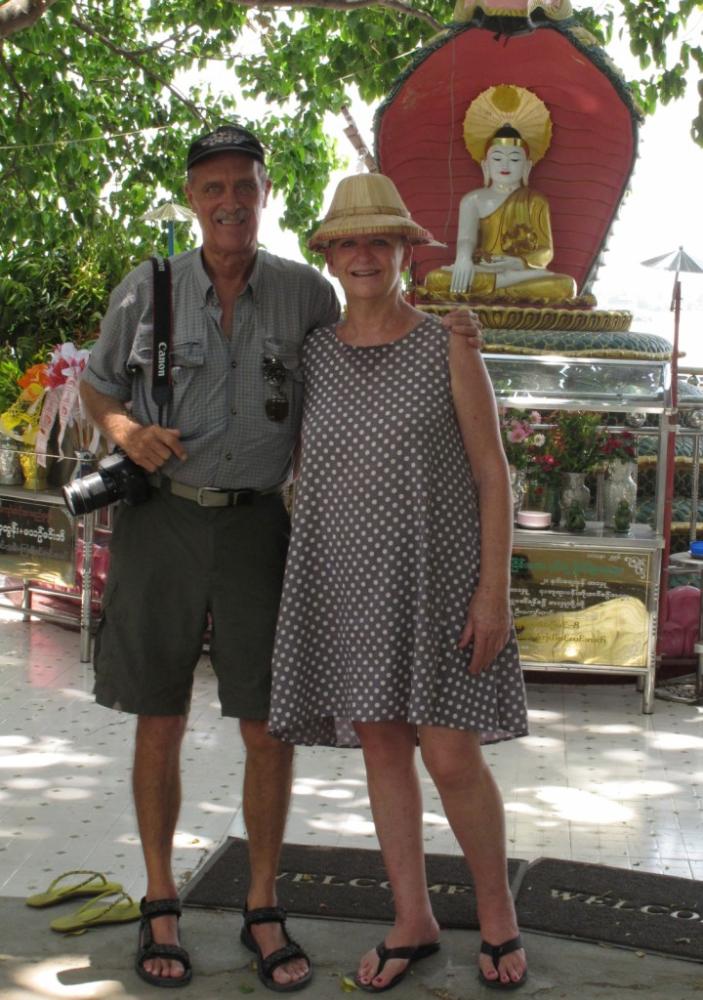 Now back to photo-editing...