I'm sorry it's been so long since I posted a note, but we have been working 10 hours a day, 7 days a week, trying to get everything done in the month we allowed for the haul out. I've been too tired to do anything more than eat and go to bed most nights. Check out the photo gallery to see what we've been doing.
I began working on getting the paint off Allegria and soon realized it would take forever so we had the hull sand blasted, which is a scary thing for a fiberglass boat. The good news is the guy doing the sandblasting was an artist and did a great job in getting the paint off without removing too much gel coat. I also opened up about 8-10 blisters and let them begin to dry.
Looking at the prop shaft showed the cutlass bearing was in need of replacement so I pulled the prop, shaft and old bearing. They all came out but not without a fight, as you can see in the photos. We also noticed some play in the rudder between the shaft and the rudder body and so I decided to drop the rudder to investigate that as well.
There have been a few of these boats which have had problems with the rudder shaft fracturing inside the rudder which then renders the rudder useless. Obviously we wanted to be sure we were not among those unfortunates in the middle of the ocean so I opened the rudder to inspect the shaft. As you can see in the pictures it was major surgery, but the shaft was in good shape and the source of the play was some delamination of the glass from the superior part of the shaft. I was interested in reinforcing the shaft at the bend which is where the fractures have occurred. After speaking to welders who know about these things we determined that the shaft would need to be removed from the rudder to weld it and that would require a more complicated reorientation of the whole affair during the reconstruction. As my old Dad said "if it ain't broke, don't fix it", so I decided to reinforce the weak area by tabbing in a large amount of fiberglass cloth and rebonding the shaft to the rudder body, and then putting it all back together again.
Another project on the list for this haul out was painting the topsides of the hull. Allegria is showing her age and the fiberglass gel coat is badly faded. Commonly boats are painted by spaying them (similar to cars). This requires specialized equipment and experience and also deep pockets. The other option is to use a technique called roll and tip, where one operator rolls the paint on and the second operator tips it off with a brush. The 2 part polyurethane paint flows so well that it can create a very smooth finish. I did this technique last year on the deck and cabin top and it came out pretty well so Molly and I were determined to give it a try on the sides of the hull.
We started by filling all the gouges and scrapes on the hull sides and sanding everything very smooth. We then prepped the glass to removed any wax and contaminants and put on 2 coats of primer. There is much sanding in between coats to get a smooth surface. Then 3 coats of the final color with sanding between and the job was complete.
We then began work on the bottom. I had filled all the blisters and we planned to coat the bottom with an epoxy barrier since we had sandblasted it to add thickness and protection. After 4 coats of epoxy barrier we applied one coat of hard antifouling in black color to serve as a marker and then 2 coats of our normal ablative antifouling paint.
The other jobs done were to install new thru hulls for the watermaker and 2 heat exchangers (called keel coolers) for the new refrigeration system. Now I plan to paint the boot and cove stripes and service the other seacocks, put in the new prop shaft, coupling and put on the new prop and we're scheduled to go back in the water this Friday.
Stay tuned for further developments. 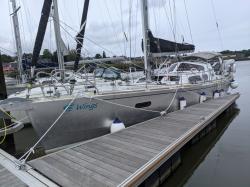