We got an early start and let go of the mooring before dawn. It was light by the time we cleared the mouth of the bay and we headed west to clear Cape Sable at the tip of Nova Scotia. We enjoyed a fair tide that helped us along cleared the islands before noon. Despite the fore cast the wind was light so we were motor sailing along. Even on the track to Cape Cod we experienced a lot of current going into and out of the Bay of Fundy. There were many upwellings and eddies which made the sea surface rough for the first 24 hours. The wind filled in a bit and we were able to sail for a good bit until we closed in on the cape and the wind died. We hit the Cape Cod Canal at around 5 AM and had a fair tide so in we went and by the time we were at Onset the sun was up and we pulled in for a rest.
I called the number we usually use for checking in with Customs and Immigration and found out that it now only works for Florida. The guy I spoke with also told me that we must use the ROAM ap now for check in. I downloaded the ap and went through the process, but found that it doesn’t work north of the Chesapeake at this time. So I found another number to call and got in touch with a local officer and after a lot of wrangling finally got cleared in. It seems that with all the changes going on in the clearance procedures, no one knows what is going on. Hopefully as time goes on and the new procedures get fully implemented the process will be much easier.
After all that (3-4 hours of fooling around) I was too tired to do anything else so we went to sleep and the next day headed out for Block Island. We got an early start to beat the wind but it was up before us, so we beat our brains out getting over there, but did make it in one piece. The place was still crowded from Labor Day so we anchored right before sundown and were up and out early the next day.
We headed over to Greenport NY on the northern peninsula of eastern Long Island, an area we have always wanted to explore. We also had friends, Diane and JP, who were there as well. We had a nice visit and dinner and strolled the town a bit, sightseeing. This area is close to Sag Harbor and it is a place where all the beautiful people spend their summers, so we fit right in.
We were up early again the next day to catch a fair tide through Plum Gut and into Long Island Sound. Then it was west to Port Jefferson and a visit with Lisa. It was good to see her again, although she is very busy finishing her dissertation for her PhD in Art History. We had been watching hurricane Florence and it was fore cast to head toward the US east coast and looked as though the New England area might be a target. The last place I would want to be in a hurricane is New York and the weather was such that we needed to leave or be stuck there until after Florence did her thing. So, with heavy hearts, we bid Lisa goodbye and headed early up the sound and through the city, then down the NY harbor and past Sandy Hook. We had a fast sail south and found ourselves off Cape May and rounding it at sunrise. We had a reach up the Delaware Bay in 25- 30 knots of breeze and hit the C&D Canal at the end of the flood and got through in record time. The weather was rapidly deteriorating as we pulled into the Bohemia River and got anchored, back in the Chesapeake. We sat the next day as the weather was blowing and raining. Then, the day following, we had a nice sail down passed Baltimore to Harness Creek near Annapolis. By now it had become evident the Florence was, in fact, heading towards the Carolinas and could mess with us in the Chesapeake Bay. Now I was really aggravated after leaving Lisa and sailing all the way down here to get in the way of a hurricane. We made plans to get the boat secured in a place we know and enjoyed a couple of days walking around Annapolis, getting groceries, and boat parts. Today we moved to Galesville and pickup a mooring, but now it seems the storm is playing with us again and plans to take a southerly turn so we will hopefully not get any weather. Since we are on a mooring and we have time we are now planning to rent a car and run over to Cleveland to visit Molly’s Mom, who we haven’t seen in a couple of years.
We’ll see how the weather develops over the next couple of days and then go. When we return, we plan to knock around the Chesapeake a bit and then go to our Whitby Owners Gam and then the Annapolis Boat Show. 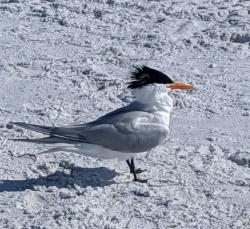