NYC, The Hudson Experience and the start of leg 5 NYC was fantastic. EJ and I toured the 9/11 memorial, it took almost a day, a lot to see, and many memories rekindled. I left Newark bound for Raleigh NC at about 7:50 AM on 9/11/2001, I landed in a different world and mood. Silence and solitude in a normally busy airport. Then we saw TV Monitors.

We saw Jersey Boys, and had a great early anniversary dinner at Tribeca Grille, recommended by Jake's mom, traveled the subways, saw Wall Street and took the day long BigBus tour. We loved NYC. Anniversary picture are on EJ's Facebook.

Liberty landing Marina was very safe and secure, I had to walk a mile and a half for groceries, but the secure marina with great access to the city made it worth it. The ferry to the city left from a dock 200 feet away, and dropped us right in town.

Next we started the trip up the Hudson, while close to the city, the river traffic was heavy and busy. I saw 356 AIS targets at once, the most since Ft. Lauderdale, and again, we were the smallest. We also encountered our first AIS tagged Aids to Navigation, so now radar in busy areas is supplemented by AIS, great when navigating tight places in the fog, and we had some of that.

The Hudson above the city was a mixture of old and new, and reminded me a lot of Europe. Waterside homes, train traffic and many bed and breakfast places. 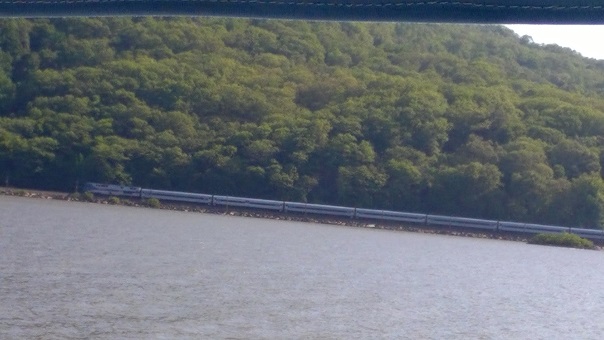 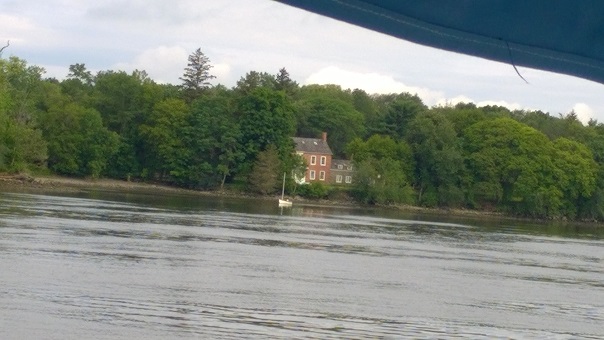 In Catskill it was time to turn the EdE J into a trawler again and prepare for leg 5. The team at Riverview was fantastic. At Riverview, they keep cradles and wood from previous cruisers, and you go grab what you need and build. Engineering and building a cradle to support the 65 foot mast on a 42 foot boat was a challenge, but in the end I did it, and after a day of labor EdE J was ready. It took the crew 45 minutes to drop and set the stick, and we were ready. 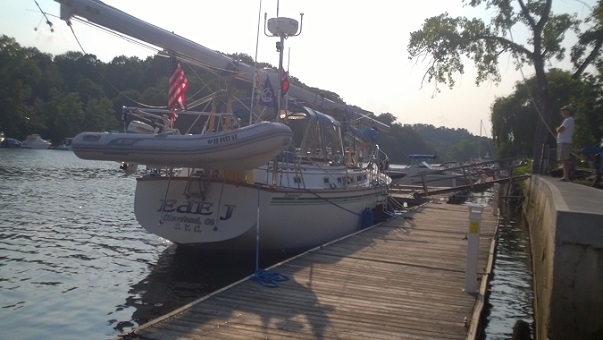 Off to the races the next day, we cleared Federal Lock 1 in Troy and made the turn to the Erie Canal officially ending leg 4 and starting leg 5, only about 600 miles to go. I found out how much more difficult it was to maneuver with that big stick sideways, but EJ was a great Admiral calling out distances, and letting me know before I hit anything. We learned a lot in Lock 1. 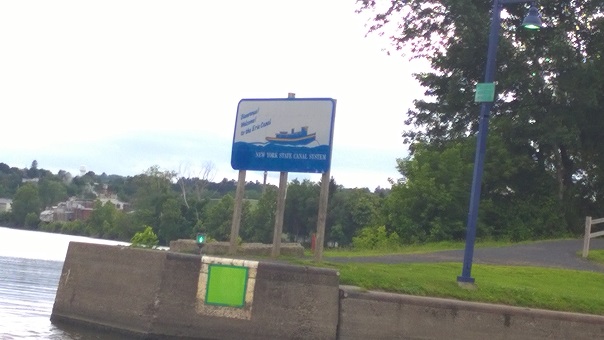 More on the Erie canal and the challenges of it later.

See all of you soon, Ed and EJ