Happy New Year to All.

30 December 2015 | Tierra Verde Florida, the EdE J is on the hard in Cleveland
Ed/Fantastice here The last few months have been a mixture of Boredom and Craziness. Ending a boat trip of 366 days does not set in until you start putting the boat on the hard for the winter, and then the depression sets in.

Fortunately the depression and boredom were broken by the fuel smell investigation, and receiving the Yachtsman of the Year award from the Cleveland Yachting Club. Meghan and Jake flew in for the award, and since I certainly could not have done it alone, I had an award plaque made for EJ for Christmas. 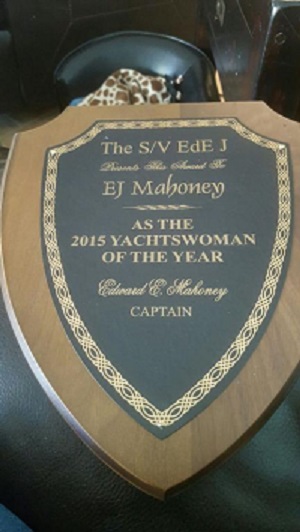 Meghan and Jake followed that with an invitation to stay in Florida after Thanksgiving and take on a few Daddy-Do projects. Like most young professionals, their time to do small projects around the house is limited by the demands of work and social life. I remember those days, so I was glad to come and do some projects at their home.

One of the things I like most about the St. Pete area is the abundance of Boating supply stores. They have a West Marine super store, with a real working display of electronics, and they have inverters, battery chargers, solar panels and about everything you need in stock. There is also Fiberglass Coatings Inc., with some of the greatest technical staff I have ever met, and a great stock of resins, glass and supplies.. Down the road in Bradenton, is one of the Endeavour Owners Forum buddies who happens to build boats for a living, a phenomenal resource for any DIY guy.

So I was able to fix some things at Meghan and Jake's house and fill my brain with Trivia about boat repairs..

Now for some gory details on the fuel smell. The smell original occurred shortly after a fuel fill up. I did not see anything in the bilge, but as we traveled I noted that the Bilge sock got a little pink, after a few hours of travel we docked disposed of the soiled sock, and the smell was gone. For haul out in Rocky River, I filled the tank, and the next morning the smell was back. Searching the bilge, I found nothing, and the bilge was dry. After putting the boat on the hard, a small pink film showed up in the bilge, and the bilge sock had a small area of pink. I began the process of emptying the tank into 5 Gal cans, removing 30 gallons. Changed the bilge sock and went home for the day. The next morning no smell.

At the suggestion of my boat building buddy, I cut a few inspection holes in the keel, and using an inspection camera, I found a cracked weld at a bend in the tank 3 inches from the top. Since I never filled the tank completely during most of the trip, who knows when the crack appeared. I removed the tank and took it to Florida with me for inspection and repair. 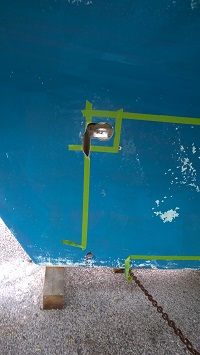 We plan to head north again after the first, and I am hoping for some el-Nina to keep Cleveland warm enough for some boat work.
Comments
Newer Older
Contents