Isla Coronados. Our favorite anchorage in the Sea. More photos in the gallery.

I think we all agree on one thing. We feel extremely blessed to have been able to spend our last month in the Sea of Cortez. The pace here in Baja seems dramatically different than that of the mainland as well as an obvious drop in population of humans, however, there is no shortage of sea life and tranquil anchorages. What a perfect place to be as our minds and bodies gear up for our return home. 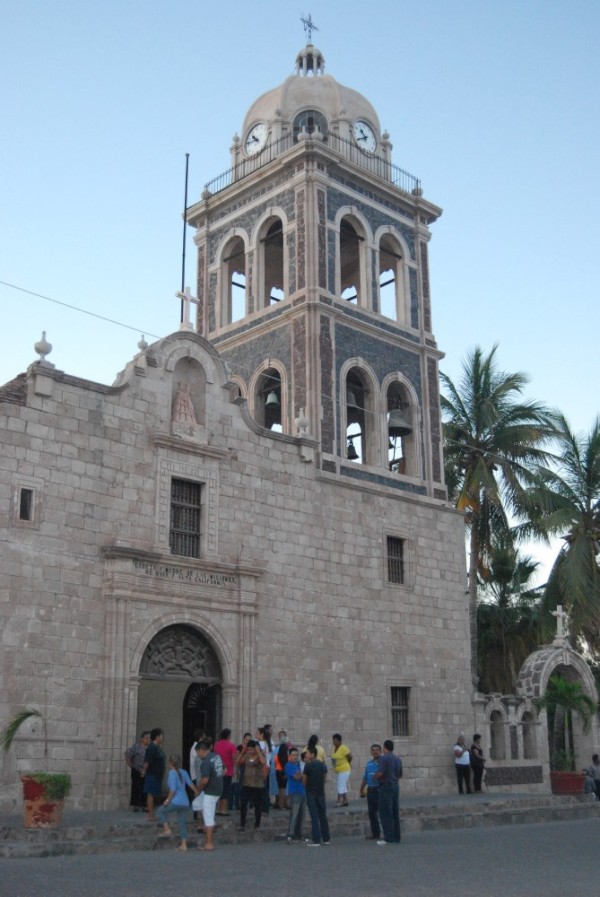 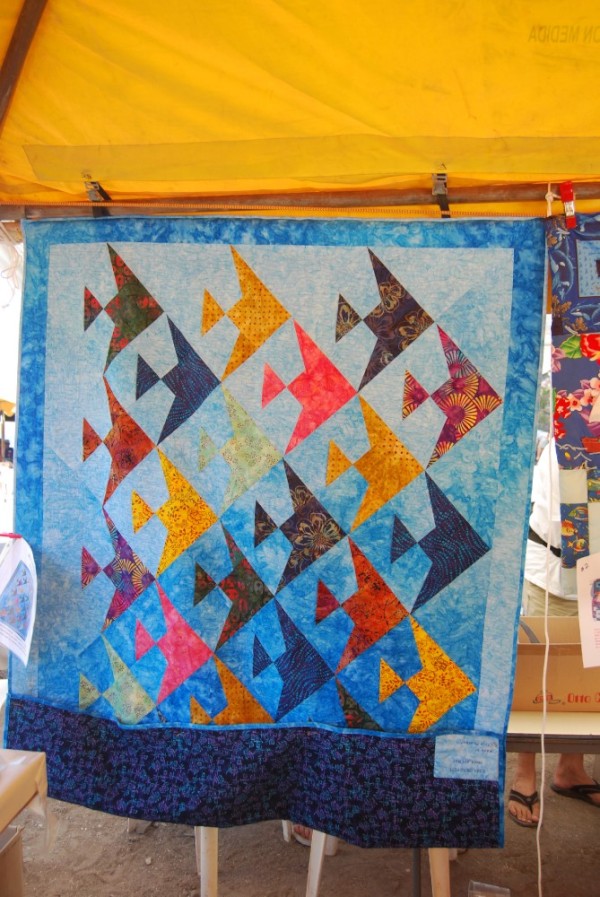 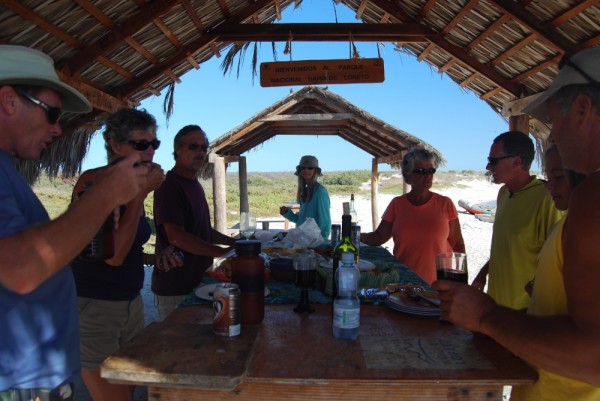 Gotta love cruiser potlucks! This one with Seycelles, Kanga, Bella Brisa. Capt. Rick made a yummy clam dip with these beauties. 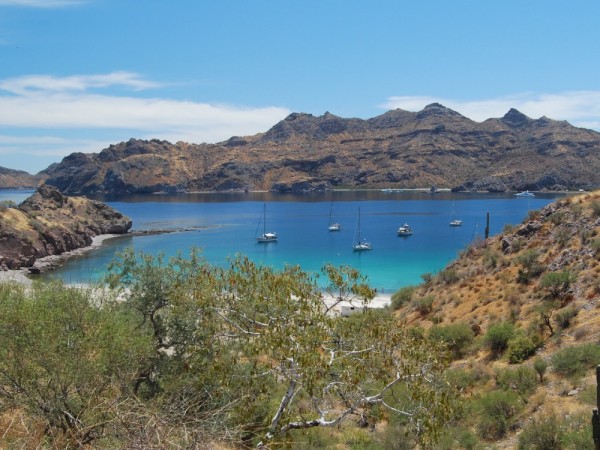 Local goats in Agua Verde on their daily stroll..... 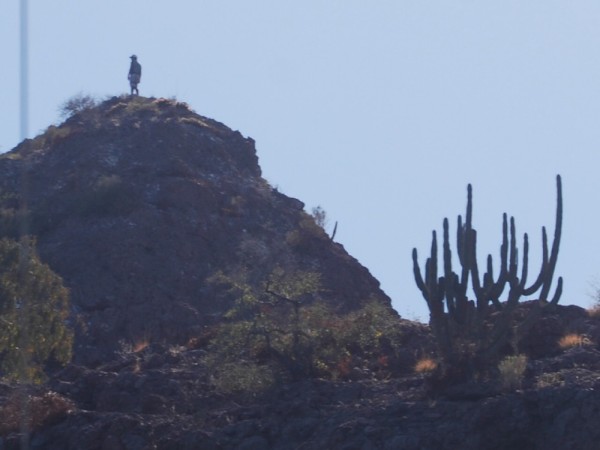 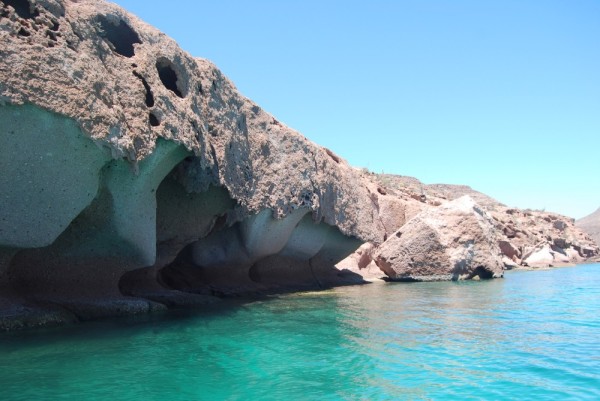 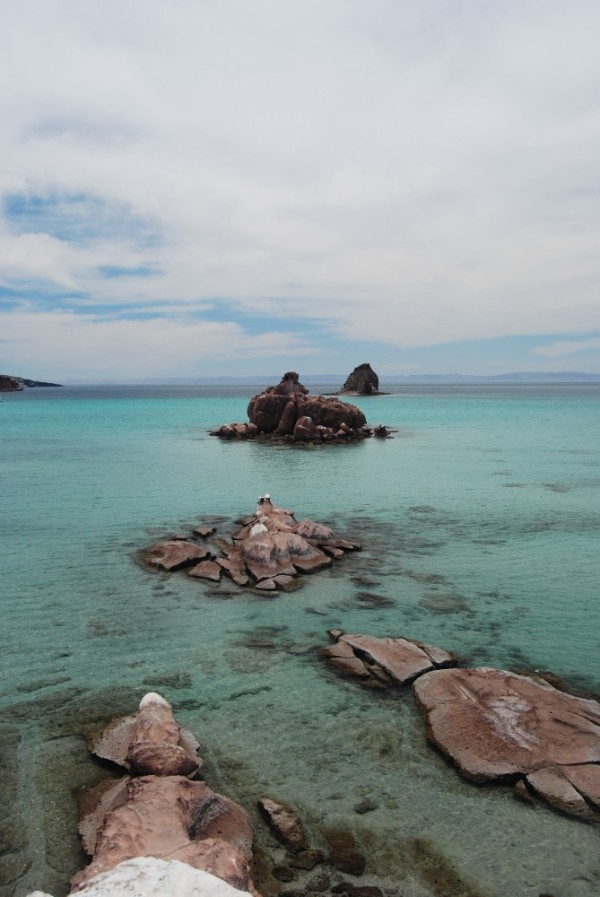 Folks ask us if we feel sad or anxious about our cruising life coming to an end. My reply is that some of us are definitely more ready than others, but I can't say I feel sadness. We set out knowing we had 2 years to travel on our sailboat; living, learning, experiencing a completely different way of life and culture, exposing our kids to a different "normal", and we did it. We have definite differences of opinions on likes and dislikes, different appreciations of our culture vs. Mexico, but I can't help feeling we will all be taking with us something valuable from this experience, even though it may not be realized until later in life. I have loved living in Mexico on a sailboat with my family and I leave feeling content and ready to jump back into life at home. However, if you ask me again next February, I might be feeling a pretty strong tug from southern latitudes! It may inspire Rick and I to put another date on the calendar and start planning our next sailing adventure....

Splash Down and Go! After a frustrating delay with Total Yacht Works on the morning of April 23rd, Endeavor finally splashed at 1045am. Ron, James, and Captain Rick took her to the fuel dock and returned to the Fonatur dock and washed her up. After being in the boat yard for 2 weeks, she was filthy. In the meantime, Sydney and I unloaded the freezer, fridge, and the rest of our belongings from the condo into Larry & Danice's minivan, which they were kind enough to volunteer, and unloaded it all back onto Endeavor. It was somewhat of a race with the clock there at the end. Low tide was at 2pm and it was looking like we wouldn't be crossing the bar until 1pm. When we finally pulled away from the dock and were close to the entrance, Capt. Rick put the hammer down to get through the shallow breaking waves. I am grateful there was nothing to hit but sand when Endeavor's keel slammed into the ground before the next wave brought her out. There goes the new paint from the very bottom of the keel. It was pretty quiet for the next several minutes and then everyone exhaled. All was well. 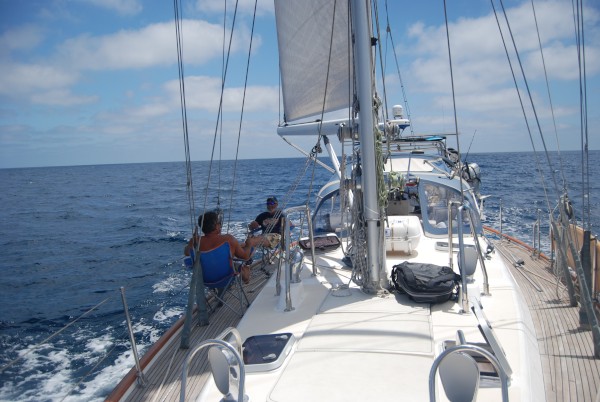 As far as crossings go, this was pretty sweet. The first day we were able to sail for several hours without the motor. After that, it was a motor boat ride with a light southerly breeze all the way. The kids, being unable to pull the "I feel queasy" card, did not miss any school work. Having calm seas, a full moon, and an extra person made night watches so enjoyable and left us feeling well rested during the day. 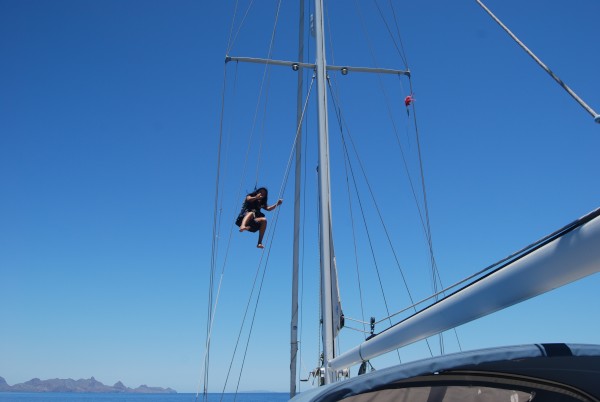 
Day two ended up being a sports fisherman's dream. At about 10am, Ron hooked and brought in a 25-30 lb. Dorado! Ok, my freezer is officially overflowing with my favorite fish. No more! After that James wrestled with what we believe was a Marlin. It took his line and almost emptied the reel, jumping and twisting out of the water. Luckily for all involved, it finally broke free. Shortly after that, we had another Dorado on the line. This time James brought her all the way in and Dad successfully released her. The last catch of the day was a nice Yellow Tail Tuna. It was tempting to keep but I was the bad guy and talked the boys into letting it go. 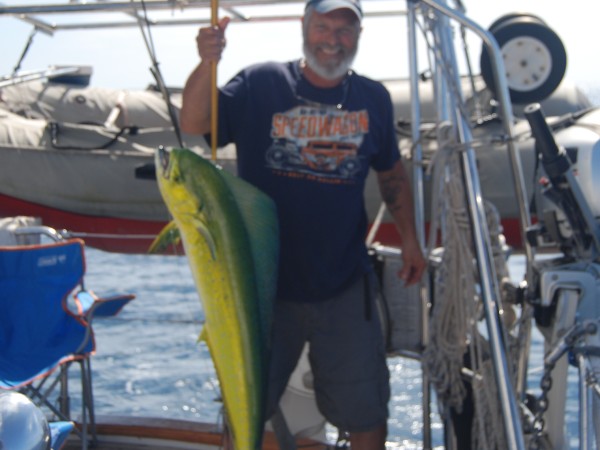 Our calm seas came to an abrupt stop. About 2 hours from our destination, the wind piped up to 22 knots at our nose with rolly beam seas and 3-4 ft. waves. Capt. Rick was on watch and I got up after being bounced around the aft cabin to find Ron buried in a mountain of books that had fallen from the shelf above the settee where he was sleeping. Pretty comical sight! We finally pulled into Isla San Francisco right at dawn and dropped the hook. We have arrived! View from the roof of Costa Bonita

Our purpose this year for going to and spending time in Mazatlan was mainly to haul Endeavor out & put her on the hard at Total Yacht Works for a new bottom, but also to enjoy spring break and spend a few final days with Terry & Diane before saying farewell. Their newborn grandson in Colorado was anxiously waiting to meet them. 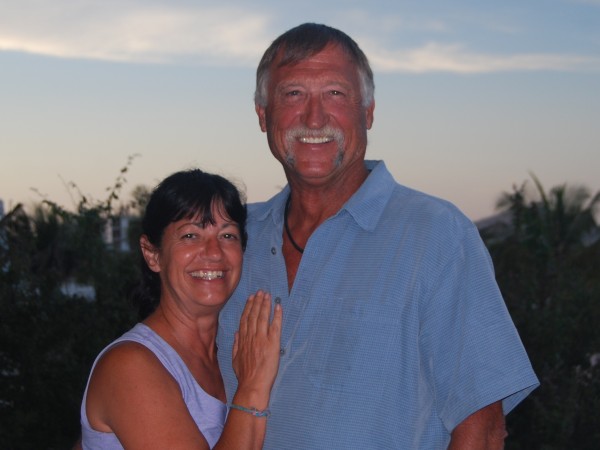 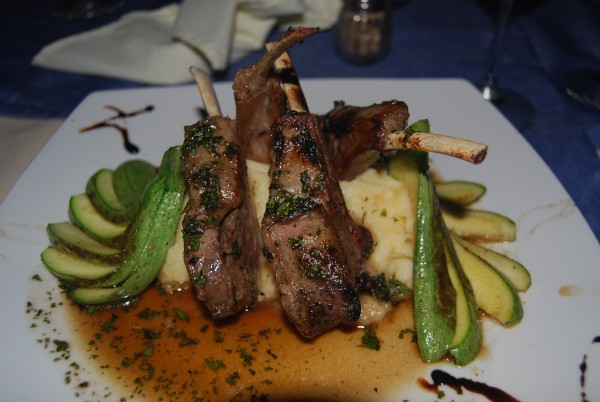 Farewell dinner at the Seafarer was delish!

Crossing the bar into Mazatlan wasn't quite as exciting as last year even though the harbor master closed it for all boats going in or out of the harbor. Well....it didn't seem too bad to us and the tide was high so Captain Rick gunned her in between sets of rollers and we flew through without incident, landing safely at the El Cid Marina. Let spring break begin! It felt decadent to be a "tourist" at a resort, but even Sydney agreed this was legal and deserving since we were legitimately on spring break. While spending 4 nights here, we took advantage of the pool, amazing internet (streaming Downton Abbey!), and did some exploring around town. Sydney and I stole Diane for a day and took her down to Old Town. We spent several hours wandering the streets admiring the old architecture, perusing the art galleries and the historical Basilica, and had lunch at our favorite restaurant, Molika. We strolled through Plaza Machado and passed the Angela Peralta Teatro where Syd was thrilled to see that the Mazatlan Ballet Company was on the schedule to perform Don Quixote again this year on April 12 & 13. Perfect timing! 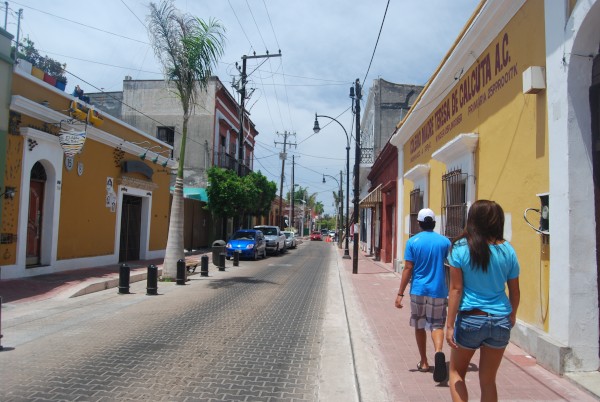 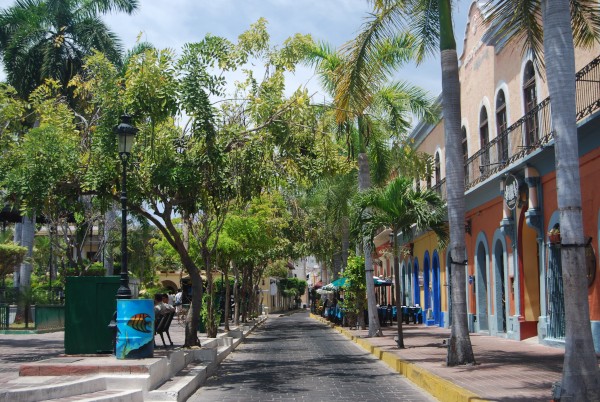 Harmony & Endeavor were hauled out the morning of April 9. Harmony will be on the hard until their return in June, and workers began scraping many layers of paint off the bottom of Endeavor. Finding blisters between the gel coat and the fiberglass after a few days of work, Captain Rick decided they better take it all off, down to the fiberglass hull, to apply 5 coats of epoxy. This delayed our departure by a few days, making Endeavor stay out a total of 13days. In the meantime, the Phillips family was forced to endure living in a beautiful 2 bedroom condo at the Costa Bonita (which was half the cost of a hotel room at the El Cid) that friends Larry & Danice Rauh were kind enough to hook us up with. They own the unit next door to ours so when they are not on their sailboat Ladera Star or at their home in Pleasant Hill Oregon, you'll find them here along with their sweet pup dong, Gunther. Thank you Larry & Danice for ALL of your help, driving me to Mega twice for provisioning, and being such fun neighbors! We loved spending time with you!

The last few days were kept busy with readying ourselves and Endeavor to leave. Having the extra-large galley in the condo and no concern with overheating our living space, I spent a few days cooking meals ahead to freeze for our passage into the Sea of Cortez. Some more highlights of our stay in Mazatlan include an evening at the ballet with Sydney and Danice; an off shore fishing charter where we caught a Dorado and a Marlin; condo living in all its glory; the arrival of Rick's brother Ron who came down for another excursion on Endeavor; and spending time with great people. I think the kids were most excited about having a toaster, microwave, dishwasher, and unlimited showers. Having a washer and dryer was pretty indulgent too. Simple pleasures! QUOTES ABOARD ENDEAVOR "I can see the attraction here!" ~Rick~ everytime we drop the hook
“Men go back to the mountains, as they go back to sailing ships at sea, because in the mountains and on the sea they must face up.” Henry David Thoreau