We are finally back in full working order after the saga of the contaminated fuel tank. I promised to document this so here goes.
The Bristol 38.8 has a tricky fuel tank. It is inaccessibly located under the cockpit floor with no inspection port. Consequently, this one had not been internally inspected since 1983 - asking for trouble... It has been on my worry list for a while but, without an obvious solution, I kept putting it off - mistake. The consequences were documented in my last post so this is about the fix.
The first thing we did was create a temporary fuel tank using a 10ltr plastic fuel container so that we could run the engine if we needed power or had to move suddenly. I also got off my butt and finally made up the proper cable to connect our multi-voltage battery charger up to 220v dock power. Naturally, since then the sun has shone pretty much continuously so plenty of solar power, but best to be prepared.... 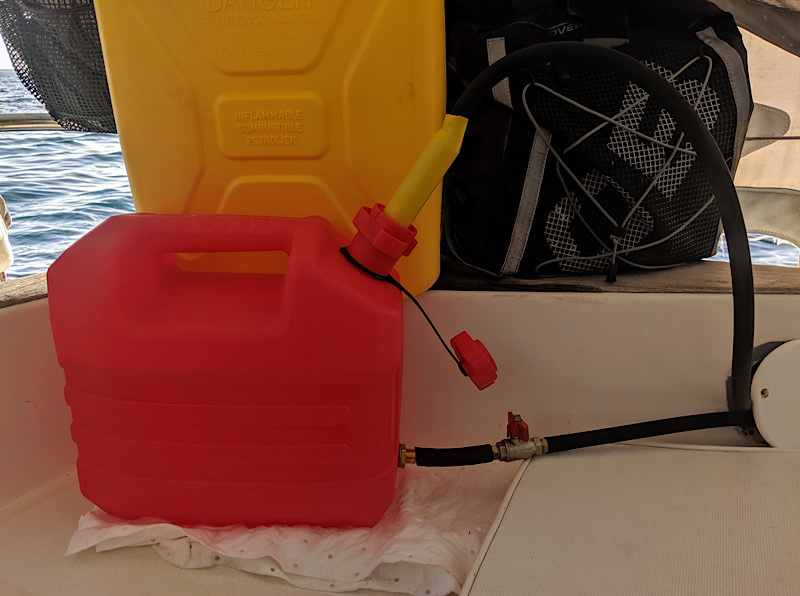 Plan A was to repeatedly flush the tank and hope for the best but there was no way to be confident that this had solved the problem. Plan B was to get the tank out to clean it but that involved removing the water heater system, the exhaust system and probably some of the steering system with no guarantee that it would come out then. So, onto plan C. We found that we could get at one side of the tank by removing the side wall in the port lazarette so we felt that we could cut a hole in the side of the tank and install an inspection port there. There was absolutely no access to the top of the tank. A side port is a slightly dodgy move because it is hard to prevent inspection ports leaking but the characteristics of the Bristol tank made this less of a concern. The tank is fairly thick Aluminium and very structurally stiff, so the flexing likely to occur in thinner steel tanks was not a big issue if the project was well executed.
This is trickier than it looks. You cannot put your hand inside the tank to do up bolts. One option is to tap the tank wall and bolt into that but we decided it was not thick enough to support that method reliably so we went for a doubling ring with pre-installed bolts. The doubling ring can be maneuvered into the tank (hence the rectangular shaped hole) and the bolts pushed through from the inside to the outside for tightening. To make sure the bolts did not leak or slip they were tapped through the doubling ring and Loktited into place. A double nitrile gasket seals the whole thing up. 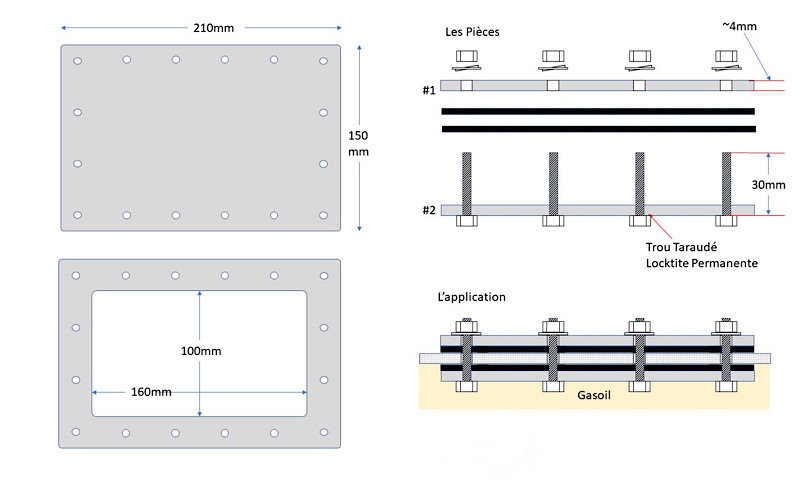 The bolts need to be perfectly vertical to feed through the holes in both the tank and the flange. Because of these tight tolerances we decided to have this manufactured at the local shipyard, Techni Marine, rather than a DIY project. Given that they build quite large boats there I was concerned that they would see this as too small a job to bother with but that could not have been further from the reality. An engineer spent quite a bit of time with me discussing the project and making thoughtful recommendations before the work and they had it finished and waiting for me the next afternoon. It was not cheap at @$290 but awesome value considering the fiddly nature of the work. They did a lovely job. It is shown here with the Nitrile gaskets in place.

Before drilling holes in the fuel tank we had to make sure it was completely free of potentially explosive fumes so we drained the grubby fuel into jerrycans, flushed the tank bottom with gasoline, drained it again, flushed the bottom of the tank with degreaser then did a couple of cycles of filling the whole tank with soapy water. All the steps before the soapy water required a 10km dinghy ride to and from the closest oil disposal facility - such is the cruising life.... Having got to the point where we were confident it was safe it was time to drill the tank. We taped the flange in place to drill the first two holes then ran bolts through to position the flange and used it as a hole template which worked fine. 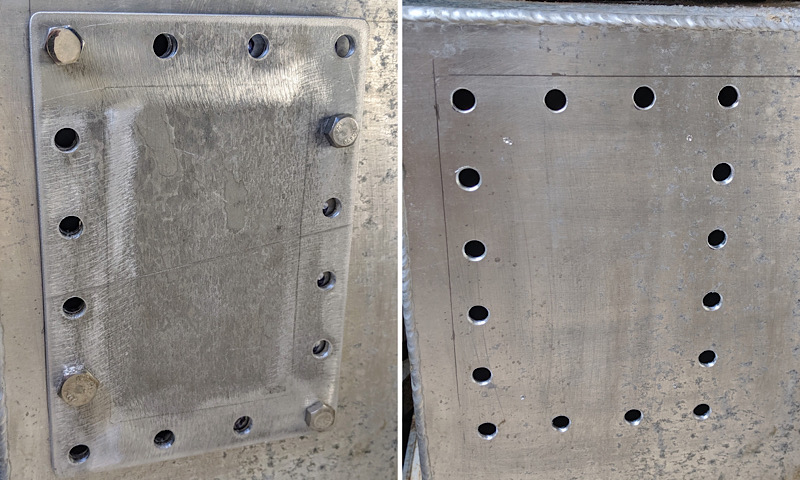 Next step was to jig saw out the access hole. It went OK but you can see why we got the rest done by professionals. This is the tank after cleaning and getting rid of a lot of fibrous crud. The central baffle is a pain but we managed to get a pressure hose behind it and then inspected it with an endoscope so we are happy it is clean. I cannot decide if the staining on the tank walls is from it being left empty for too long (not a good thing) or the lower line is where the degreaser got to. In any event thirty-five gallons of industrial degreaser was not an option so the staining remains. In the event that it is biological we address that later in the process. 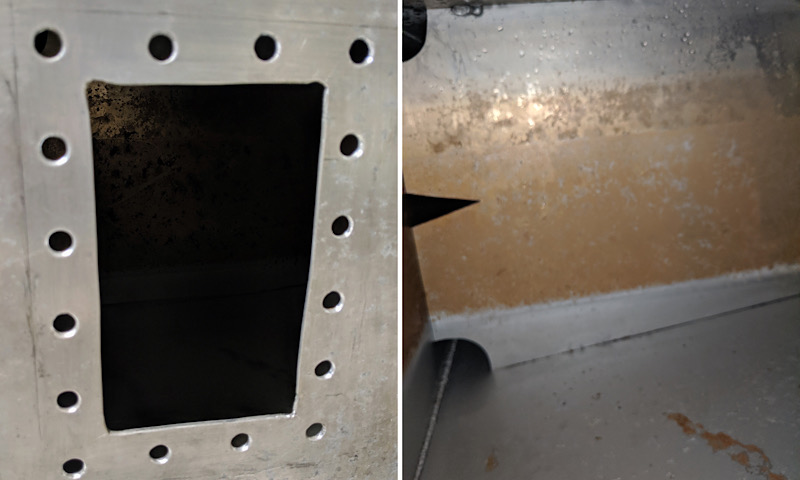 Getting the doubling plate into the tank went well thanks to the fine manufacturing process. 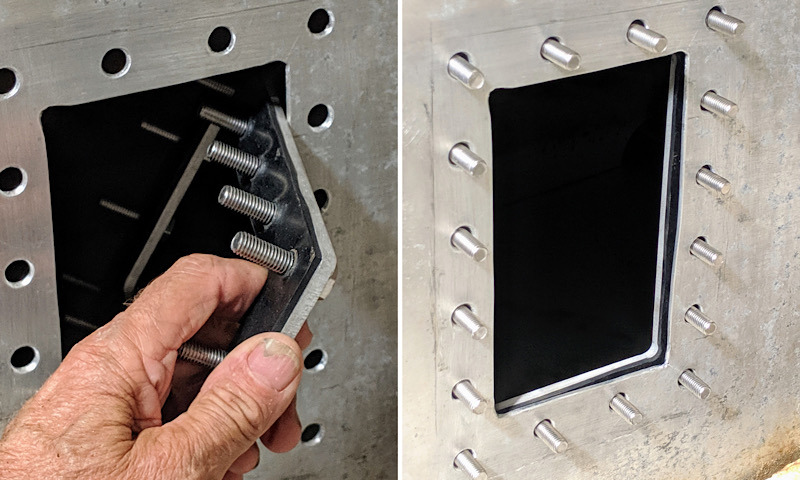 Here is the finished flange. We did a water-based leak test then removed the flange again and thoroughly dried out the tank before putting the fuel back in. Clearly the fuel was a little suspect so we put it back by a complex process of pouring it into the temporary fuel tank through a simple cone filter then pumping it through one of the engine Racor filters and into the tank. We then hit the tank with a shock dose of biocide and changed all the fuel filters in the system to make absolutely sure we had not reintroduced the problem. I failed to mention that most of this project was executed from inside the port lazarette - such is cruising..... 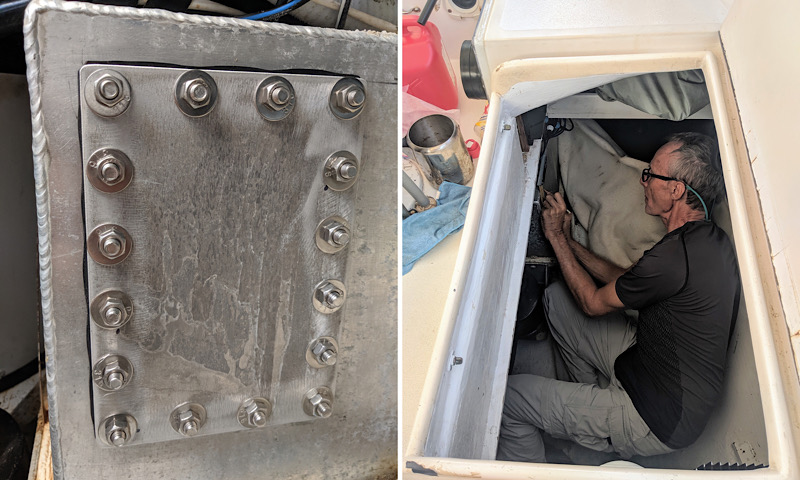 So far so good. The flange does not leak and the engine runs fine. The fuel filters look clean. All you could ask for. We are now hanging out in Marina Pape'ete waiting for our new batteries and solar panels to arrive so I will put a post together about life here soon. The view is different but still dramatic. One day there might even be more fish pics although that seems to be becoming a distant memory.