We have finally found some internet access so I have posted a new album here but I shall tell a bit of a story below.

This is part of the view from the anchorage in Hirifa, at the SE end of Fakarava. The red building is an occasional cafe/restaurant. When the owners are there you can sometimes get a meal. They organized a pig roast for the kite surfing school while we were there. We went with no great expectations, for one thing Janaki does not eat pigs.... Anyway, we were delightfully surprised. The owner is a really good cook and there was Marlin carpaccio and really nice vegetable dishes. The gathering was reasonably relaxed because everyone there had been in the out islands for several weeks but this is going to get less easy as Covid19 inevitably creeps towards us. 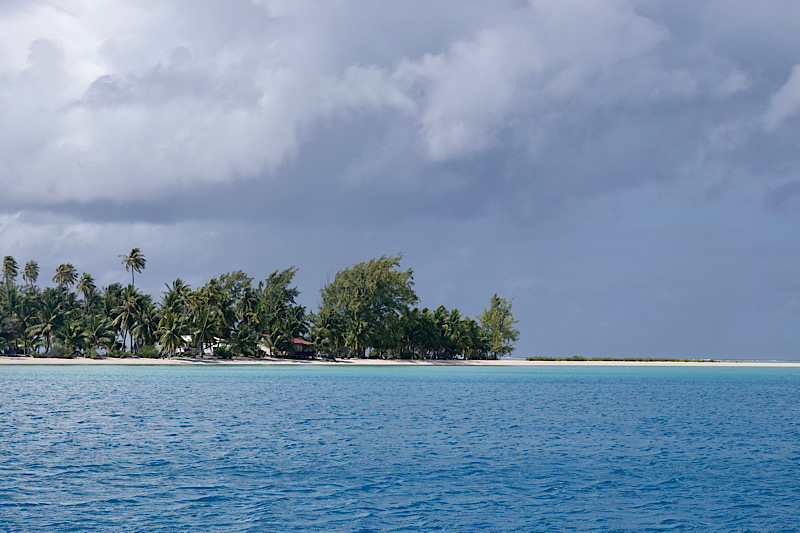 We also had a couple of fish barbeques nearby. 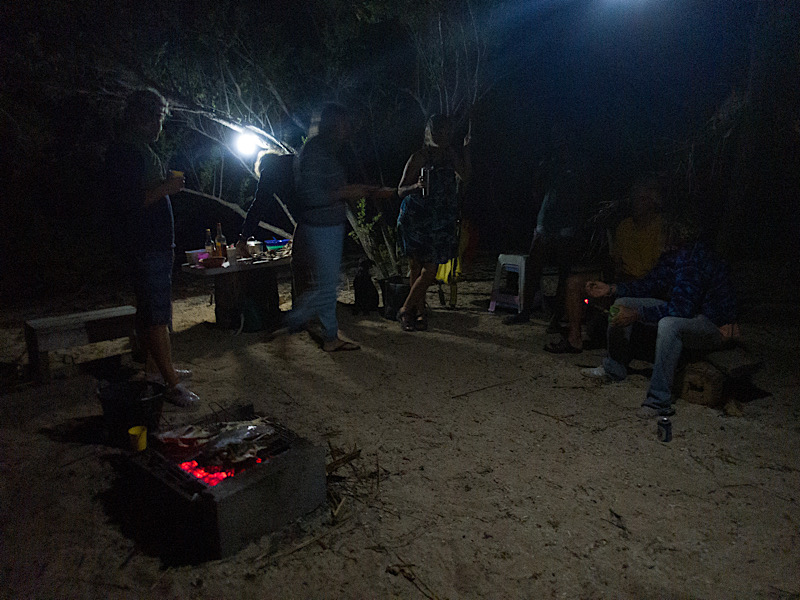 One fun event at Hirifa was the Noddy show. These elegant birds would put on quite a performance all round the boat. 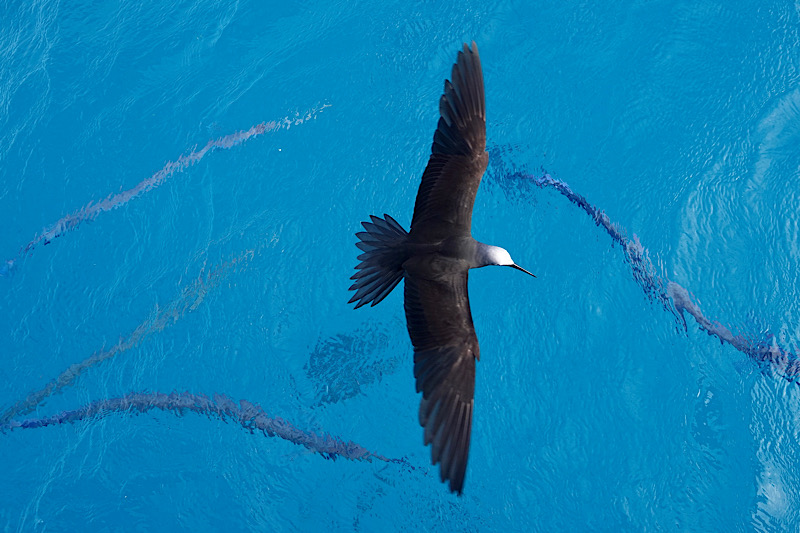 Small baitfish would gather under the boat at night and in the early morning they would be attacked by a mixed school of queenfish, crocodile needle fish and large surgeon fish. This was pretty wild in itself. We would be woken up by the thumping as the predators crashed into the hull during their chase. The noddies would then start wheeling round the boat trying to get above the attacks to pick off baitfish driven to the surface. 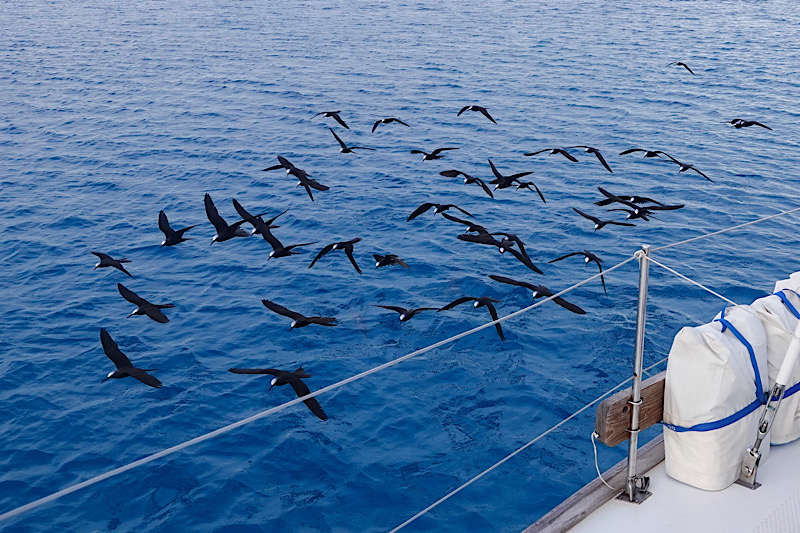 When they timed it right there would be an amazing display of aerobatics as the noddies plunged into the water and the fish came to the surface. 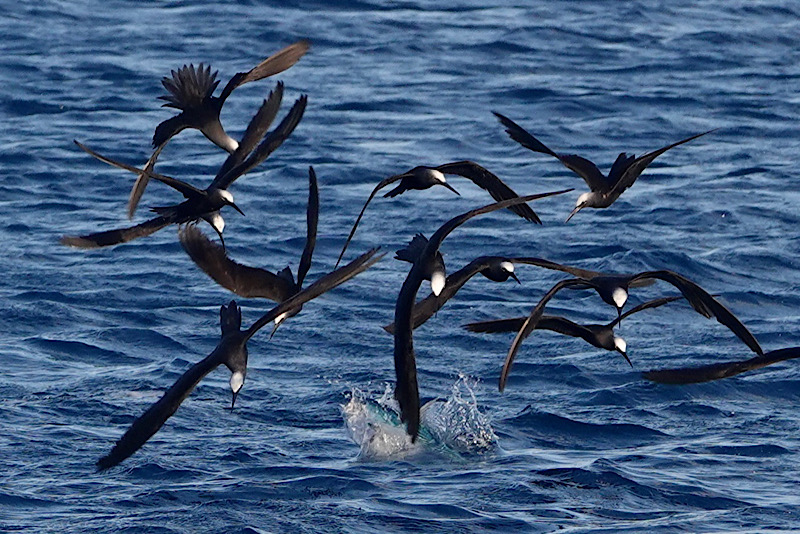 When there was a break in the action we provided a useful rest stop. Unfortunately this required a significant cleanup job afterwards. 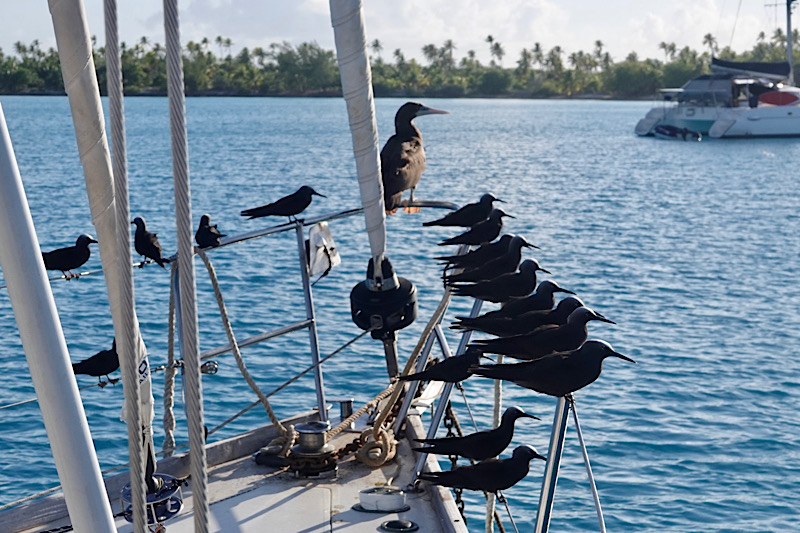 Eventually I hung some flags along the rail to discourage them and they seemed just as happy to sit on the water and rest up. 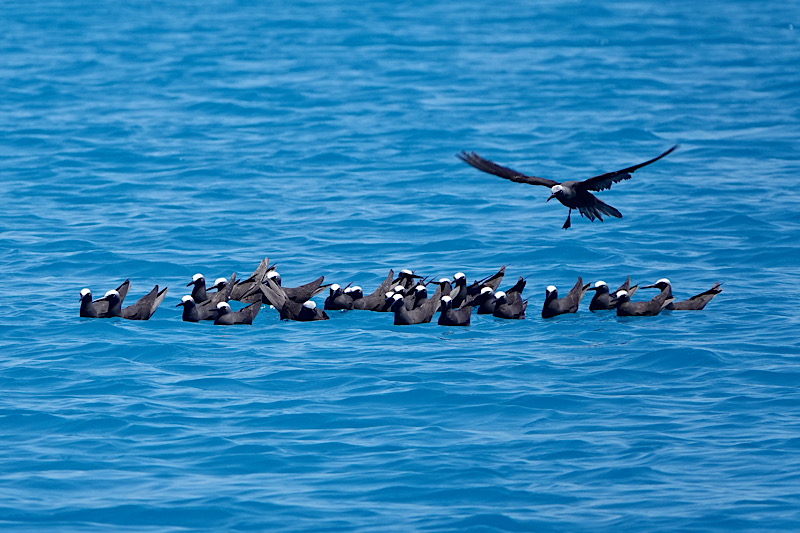 The other notable experience has been diving and snorkeling the South Pass of Fakarava. This has a worldwide reputation as a shark dive and it did not disappoint. 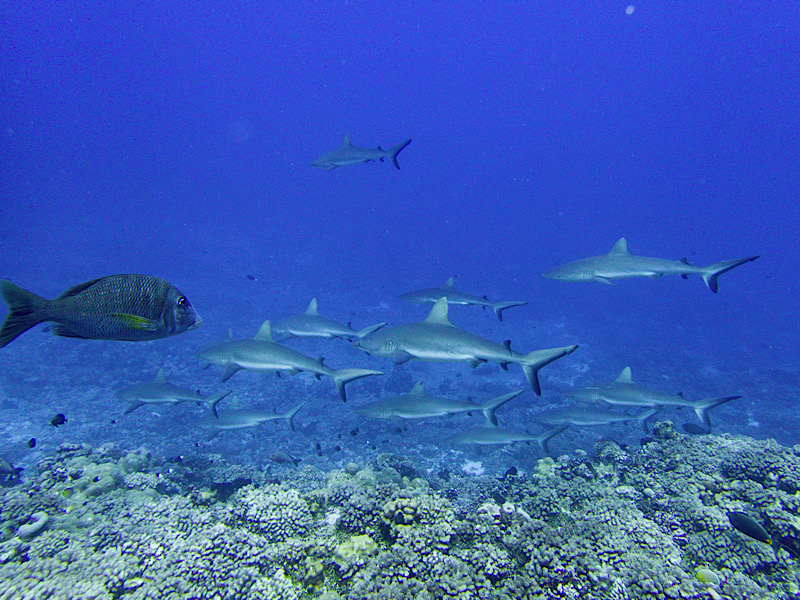 There were several hundred sharks patrolling the pass, mainly Gray Reef Sharks but also Black Tips and White tips. The big gatherings were mainly down about 80' so best viewed on scuba, although the vis was so good they were clearly visible when snorkeling 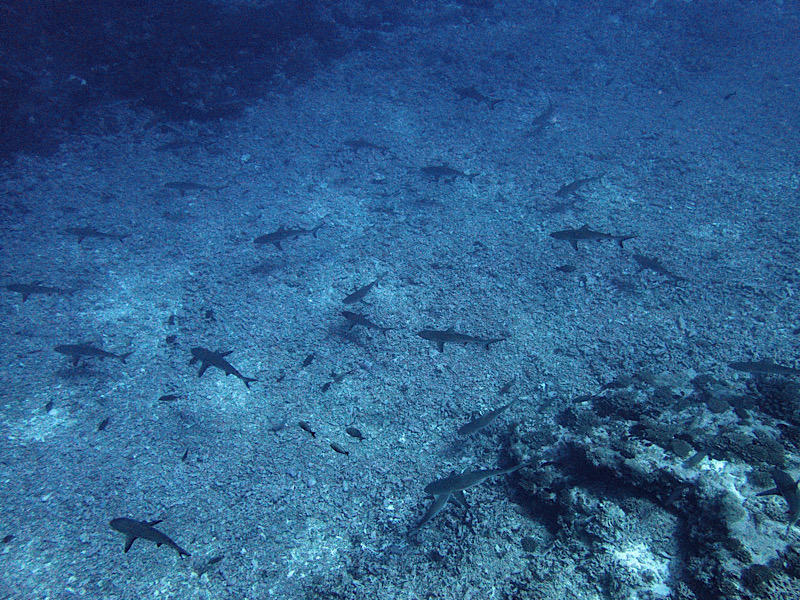 There were still plenty of them coming to shallow water to make the snorkeling more entertaining. This is a Black Tip passing a Grey Reef in about 15' of water. 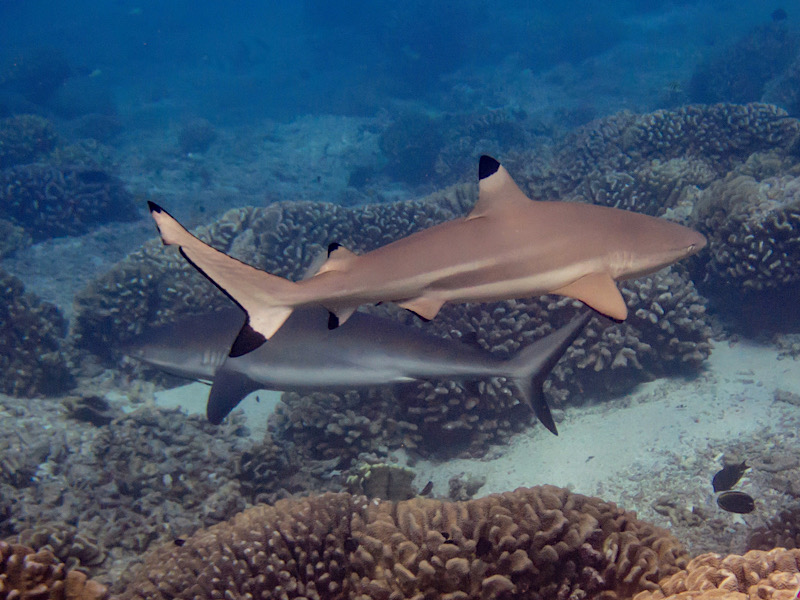 Mostly we snorkelled along the wall of the pass and over the nearby coral beds. The coral is in great condition and, apart from the sharks the snorkeling was amazing. 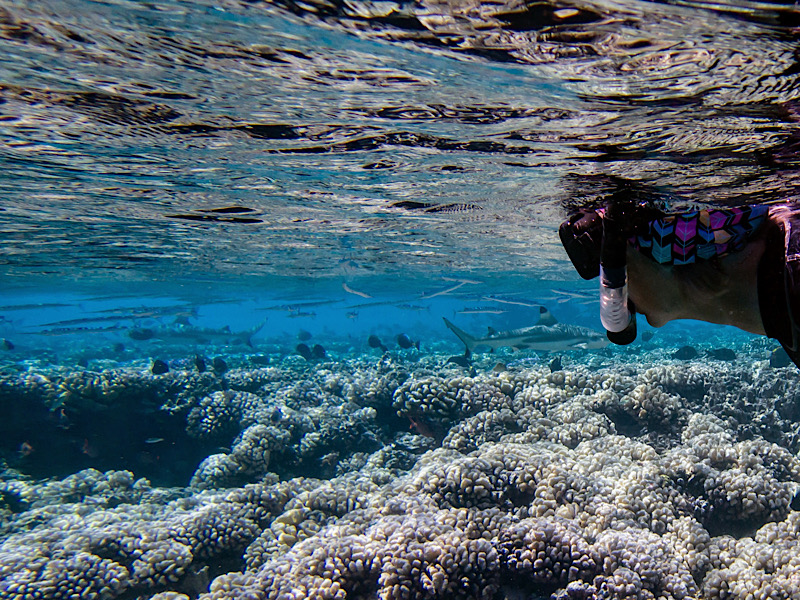 There were large schools of fish all along the wall of the pass. 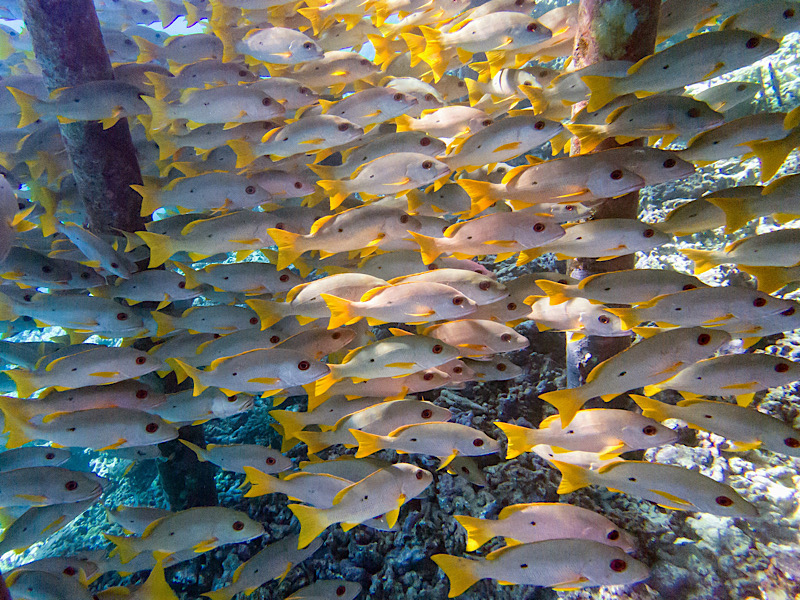 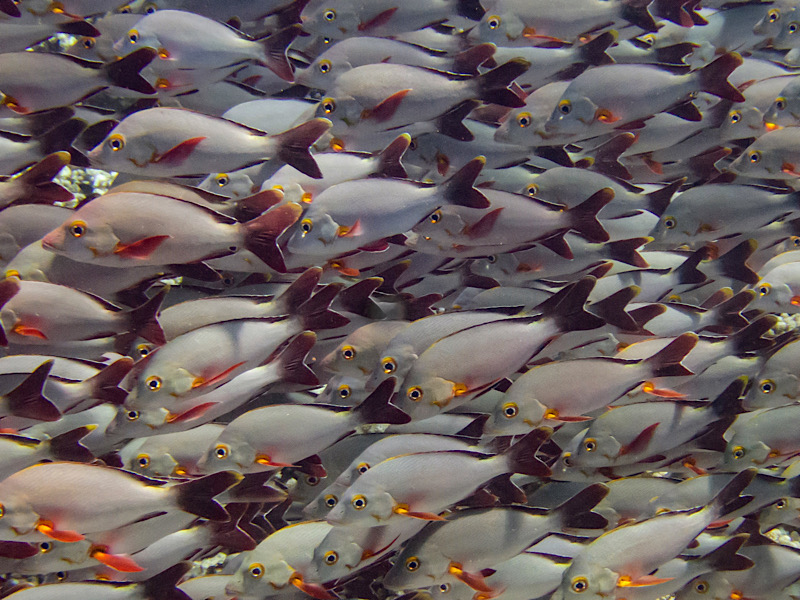 And many spectacular individuals. 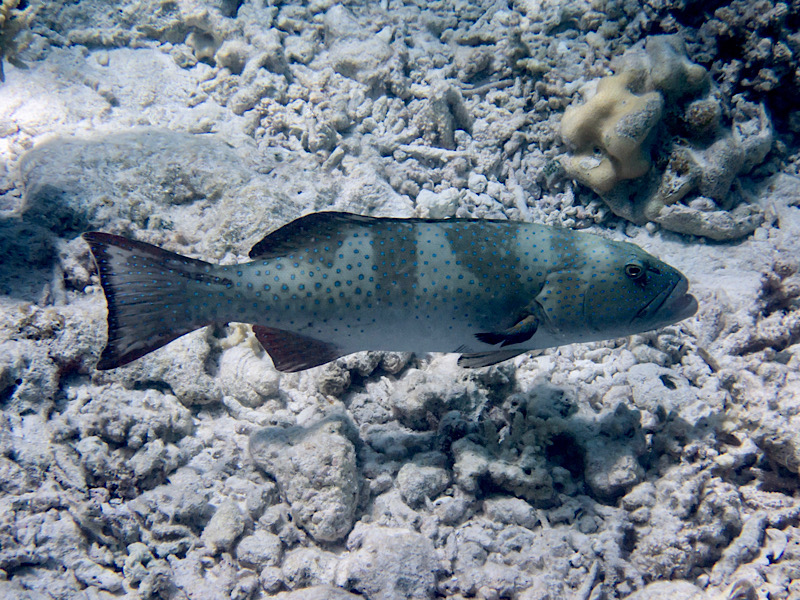 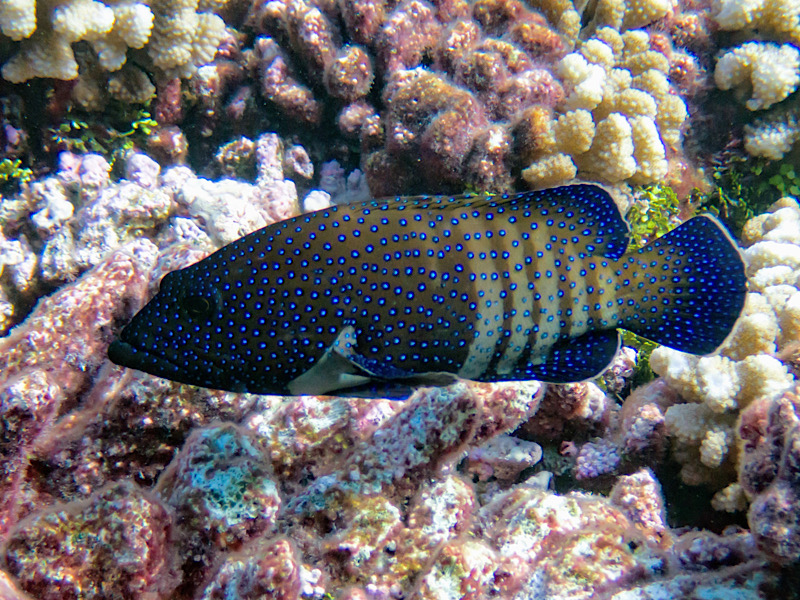 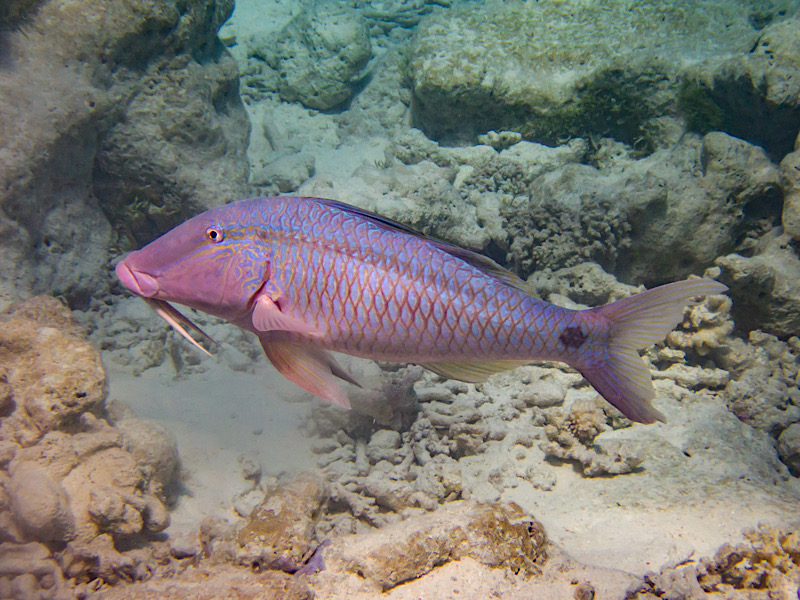 This is a remarkable wrasse called a Slingjaw. To catch prey it projects its mouth forward about one third of its body length as a tube. You can just see the structure under it's head. 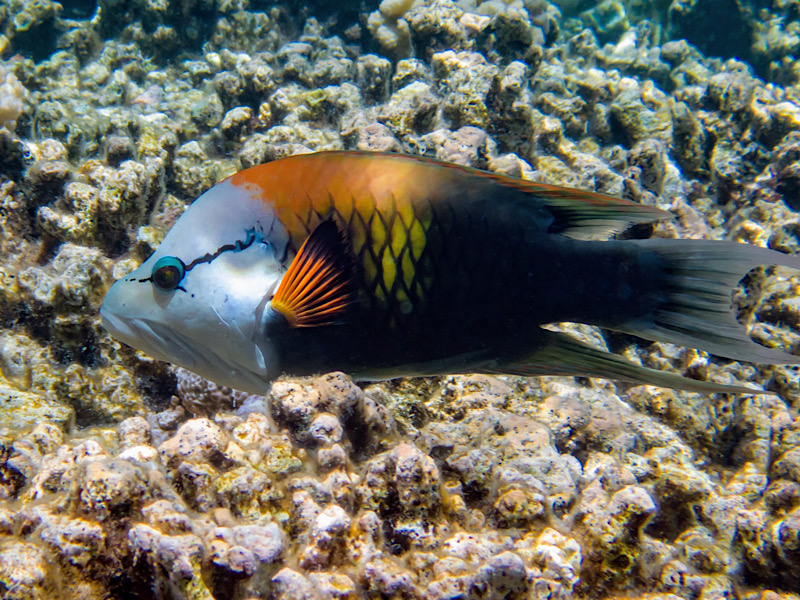 This happens VERY quickly so photographing it is a challenge. I followed this one for a while and did manage to get a shot of it hunting - in a hole.... Oh well, lots of time. 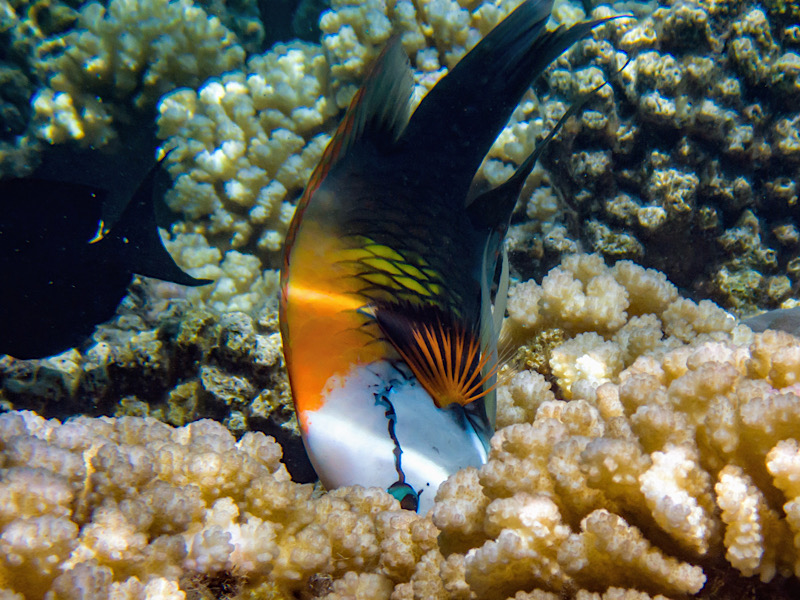 We are now back up at the town resupplying before heading out to a more remote atoll for a while. It is not very pleasant here, with high winds, a nasty swell and occasional rain squalls but that's life in 'paradise' so you take the rough with the smooth, realizing that our 'rough' is still pretty smooth.

It feels a little weird to be even writing this stuff while the world goes barmy but I guess we just have to keep on keeping on.... Take care and stay safe.