Back on the high seas for the summer

11 May 2022 | Ganges
Kenneth Fersht | clear, relatively calm and dry, windy earlier and we've had a lot of rain and drizzle of late Getting ye old Mystic back in shape. Found someone who can fix the strut for a fraction of the price i was quoted at Canoe cove so feeling optimistic about that. In the meantime running on an Evinrude 9.9 that hopefully will be reliable enough to get us were we want to go, for now. I'm at the seaplane dock in Ganges, getting kitted out. She polished up nicely after sitting all winter on the mooring buoy. What a great vessel. Kat has redone the interior quite professionally and even sewed new drapes out of durable cotton and installed swanky new lighting in the cabin. I really love what she's done. I think moving back aboard the Mystic is going to be very good for my photography but giving up the studio i'm not quite a bassy as i once was; one just can not fit a 2x15 bass cabinet aboard a 30 foot vessel and not be completely ridiculously loud and cramped. Here's a shot from the other day when i was paddling my canoe, the Chestnut around the harbour for golden hour.
Comments

After spending the winter in Ganges Harbour, on Salt Spring Island, we are back sailing again. Got a job to make a web site and do some photography for a property developer down on the south end of the island. The property is lovely; it sits nestled on the southernmost tip of Salt Spring Island, on the shoulder of Mount Tuam and going down through some 30 acres of forest, meadow, steams and trails. The place has a dock, electricity, wireless internet, with a guest house and a hot tub bath, gazebo, the worlds best espresso machine (in my opinion). About 10 minutes after dropping anchor i caught a dogfish, about a foot and a half long, with glowing cat-eyes. I was just in the middle of helping finish up with cooking dinner at the time (red-snapper with potato chips and salad, i did not catch the snapper i bought it). I'm not sure that i like dogfish(except for photographing them) but i suppose it would sustain you in a pinch. With a dog fish, you have to watch out for their small but very sharp teeth and also a spur on the tail can do some damage if you're not careful. A dog fish is essentially a miniature shark.

This fellow got his tail hopelessly wound in my net, which meant that i didn't have a chance to throw him back in the sea. If you want to eat a dogfish, which is very popular in some parts of the world, like england for example, you must kill and clean the fish immediately and then soak in fresh water for 12-24 hours to remove and ammonia in the flesh. I'm no expert in this so you should do more re-search before eating one of these, to find out how to properly clean this fish. What did i use for bait? Lox believe it or not, that's right smoked salmon on a bomber. Not a very good trade in retrospect but i got a whole bag of trim for cheap on Salt Spring Island.

On second thought, may as well just leave dogfish alone and throw them back if I can. I will if i ever accidentally catch another one. Ok here comes the sun so i'm going to get up on Deck. I'll attach a picture of the property on Cape Keppel for you to see and also a picture of that dogfish with the cat-eyes.

Currently at Poet's Cove on Pender Island, one of our favourite local destinations, due to the fact that the dock staff are so nice, and they have a pool, hot tub, spa and a pretty good restaurant with wi-fi. Great little hike to green lake is close by also and it's right on a marine park with mooring buoys or you can dock, there is usually space mid week at least.

03 August 2010 | Ganges
Kmax/fair
I suppose i should mention, belatedly, that two of my photographs were chosen for the June issue of Pacific Yachting Magazine for their article on Ganges, "Ganges Grows Up". Here they are for you to see. 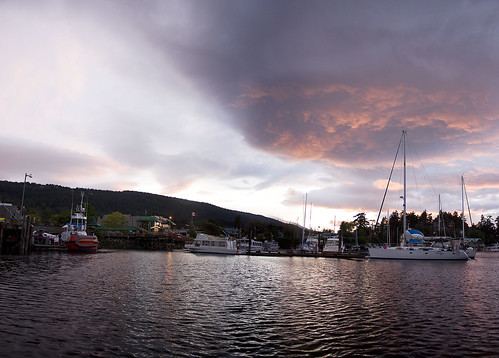 20 June 2010 | Pender Island, BC
Kmax
I was sailing north from Poet's Cove on South Pender Island the other day when suddenly i was surrounded by a Pod of Orca. There were perhaps 12 individuals in the group. I was trying to go wing on wing at the time in a light wind, a precarious balance especially when one first sets one's sails.


They caught me by suprise; I heard a loud splash of tail fluke and a distant cheer from a whale watching boat that was about 1000 metres astern off my port side. I turned and saw the whales swimming close to shore, along the bluff's where all the locals, seals, and various other boaters fish for Salmon.


These waters are rich in Coho, Spring, and other varieties of Salmon. It's herring spawning season too and there were millions if not billions of herring jumping out of the water and spawning, mainly at dusk.


I had an immediate thought when i saw the first Orca; 300 mil lens. I dove into the boat and dragged up the big artillery, a contax 35 mil film camera and a 300 mil lens. While trying to balance the tiller (unsucessfully) between my knees and keep Mystic on track i attempted to change lenses, from the wide angle that was on the camera to the 300 mil. Something went terribly wrong and i could not focus the damn thing. It was not mounted correctly. I saw that the Orca were going to be a challenge to shoot as they appeared relatively unpredictably on the surface and were gone before one could have a chance to frame and focus. I discarded the film cam and grabbed the digital SLR that was sitting always ready on the cockpit, gib flapping in the wind due to the relatively low wind and wing on wing running directly down wind. I guessed at where, directly off my port beam the next Orca might appear. Bingo! The Bull of the POD, leader of the pack surfaced right where i had guessed and i held my finger on the shutter shooting 5 frames per second of the whole sequence, set upon the simplicity of the Trincomali Channel and it's various Ilsands and islets. Here is the best of the sequence, shot on an 85 mil canon lens, not the right lens for the job really but all's well that ends well.

14 November 2009 | Pender Island, BC
Kmax/calm, sun is breaking from fog
Just sailed back to Pender Island and anchored at Otter Bay last night. We sailed out from Ganges Harbour due to an infestation by giant reptiles which were stalking and eating the small sailing vessels and tugboats there. We had a favorable wind all the way to pender, wind was about 10 knots from the NW and we went wing on wing for the 2nd leg. Our auto pilot is busted so i was on manual tiller the whole way and single handed for the most part, as Kathryn, a.k.a. Admiral Nimetz, had a snooze and made tea and such while i sailed her over.

It Was a golden rose colored sunset. Did not use the engine coming into Otter bay...sailed right in and dropped anchor in 20 feet of water. Put out 130 feet of chain and had spare anchor ready to go due to a weather watch for high winds. Lot's of fetch where we are right now, althogh convenient for the morning, not the wisest choice of anchorage really.

That's all for now...it's starting to get light out and it's overcast.

Oh yes..one more thing...i'm booked into a really good recording studio on Salt Spring Island for this Tuesday. I'm really really excited about it:-)) Daryl Chonka is going to enginneer the recordings for me which is great!!! His work is world class so once again i'm so stoked about it!!! Wing on Wing and everything! I keep seeing airplanes flying up above as we sail along. I decided to start a photo series called, "wing on wing", which will feature this exact phenomenon as a sort of play on words. I like sailing wing on wing, although it's a bit of a precarious balance sometimes. The first time i tried it i was almost decapitated i'm sure when i got too far off the wind and the boom swung hard about.
Comments
Older
Contents