Many of you know that we've been planning a major sailing adventure which is now almost upon us. Lately we've been wondering whether we could start this adventure at all, as the fates have been throwing one thing after another at us, possibly in an attempt to dissuade us. It's not working! We're going!

I had my knee replaced nearly a year ago, and that overcame a major barrier to my being active enough (and flexible enough) to do this trip. Lots of PT was required, and we both joined a gym to ramp up on our general fitness and flexibility. In January, Craig fell off a ladder in the boatyard and broke a rib, in February I had a basal cell carcinoma removed from my face, and in March Craig will need to have unexpected major dental work. That's it. No more. We're going.

We've contracted with a shipping company to carry our sailboat, Sequoia, aboard a freighter to England. The actual date of shipping has been something of a moving target, but loading is now set to be March 17 or 18 in Victoria, B.C. Because of Craig's broken rib, we've had to hire a skipper to take the boat up the coast, arriving in Victoria at least a couple of days before the loading date. There's a line of storms heading at the Oregon and Washington coasts for the next week or more, so taking the boat to Victoria will be a major adventure. In conjunction with our hired skipper, we'll be looking for weather windows. I'm glad enough not to be part of that trip!

We've been loading the boat up with supplies for the boat and the coming summer, including cooking utensils, food, spare parts, emergency equipment, sewing supplies, music, movies, and everything else we've been able to think of. In preparation for the upcoming adventure we have new sails, new electronics, and a variety of updates for systems on the boat. Now we're down to the last few trips to the boat with cartloads of stuff, carrying everything down the dock through the rain and snow (this winter has been unreal in terms of the amount of nasty weather we've had!) 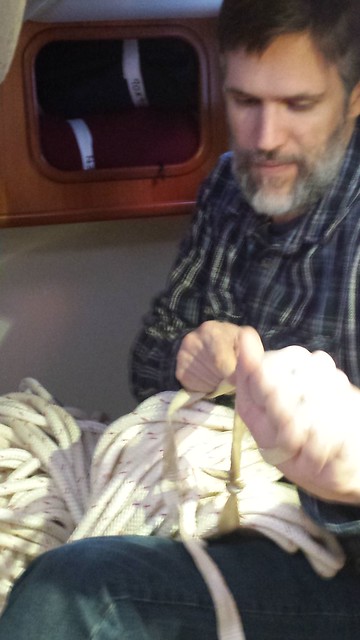 Above: Our son David helping out with line stowage.

Above: Storage for staples 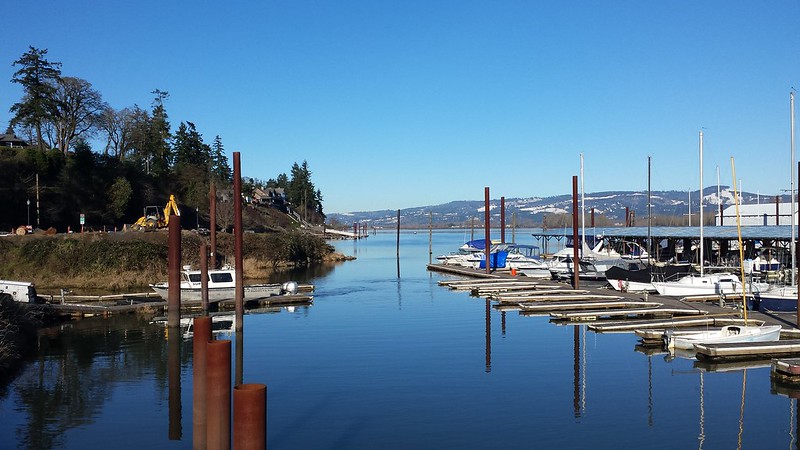 Above: St. Helens marina on a cold day 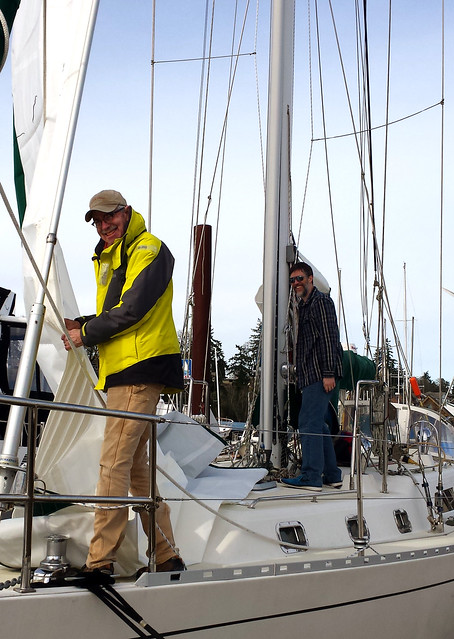 Above: Mark Downing and David Hernston raising our new staysail for the first time. 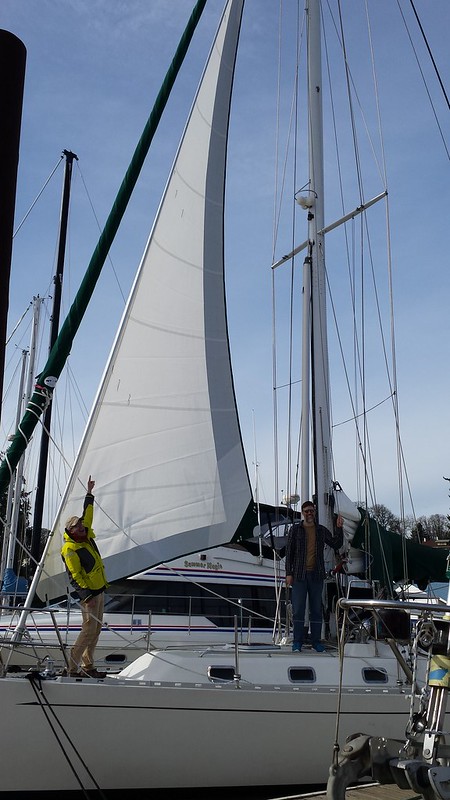 Above: The new staysail, flying for the first time.

So what are our plans, you might ask? Well, the first thing is to get the boat to England. There will be a stopover in Palm Beach Florida, where Sequoia will get transferred onto another freighter. (Yes, that Palm Beach, winter White House of you-know-who). The boat may have to wait as long as 4 weeks to catch that second freighter. If that happens, we might catch a plane to Florida and go sailing.

Once we get to England and get Sequoia restored to full sailing condition, we plan to spend the summer cruising in the Baltic Sea. Many years ago we had a Swedish exchange student who came from an important Swedish maritime city, Karlskrona, on the south coast of Sweden. We visited Henrik and the Olsson family in Karlskrona in the dead of winter when the harbor was frozen solid, but there was born, I think, the idea of visiting again aboard our own boat. The Olssons even made us a gift of a maritime chart of Karlskrona and surrounding waters. At the time, I don't think we had any idea such a visit would actually become possible.

So the summer in the Baltic Sea will include the visit to Karlskrona as its centerpiece, but while we're there we'll also visit other parts of Sweden, as well as Germany, Denmark, Finland and perhaps St. Petersburg, Russia. We'll enter the Baltic through the Kiel Canal, and hope to complete a passage through Sweden along the Gota Canal. Very exciting to think about!

At the end of this summer, we'll return to the UK, put Sequoia on the hard somewhere, and fly home to Oregon. We'll play the 2017-18 seasons of our two orchestras in Oregon, and then ask for a one-year leave of absence from both. Returning to England in the spring of 2018, we'll sail south and west in a leisurely sort of way, planning to arrive in Oregon mid-summer, 2019.
More
Comments
Newer Older
Contents