Getting ready for a trip is just a question of putting one foot in front of another. One of those steps will be stepping off of Sequoia as she's put onto a freighter. Another step will be stepping onto an airplane and going to meet the boat as she arrives in England. Every step in between is about the same size - it's just that some are more consequential than others. This narrative is about some of these baby steps, on the way to getting Sequoia put aboard the MV Merwedegracht in Victoria about a week from now.

You'll recall that Craig decided not to take Sequoia up the coast because of his broken ribs. We hired Dave King to do that, accompanied by his friend Erik and our friend Mark. We hired Commanders Weather (a weather routing company) to give us recommendations about when to go. Even if you don't already know it, you probably suspect that the coasts of Oregon and Washington can provide some of the most difficult weather and sea conditions it's possible to find in the world. We told Commanders that we had to have the boat in Victoria for loading on March 18, so what we needed was the best weather window during that time period. They told us that March 3-5 looked pretty good, and then there wouldn't be another opportunity until about March 10. Dave, in consultation with Craig, decided to go for the March 3-5 window. 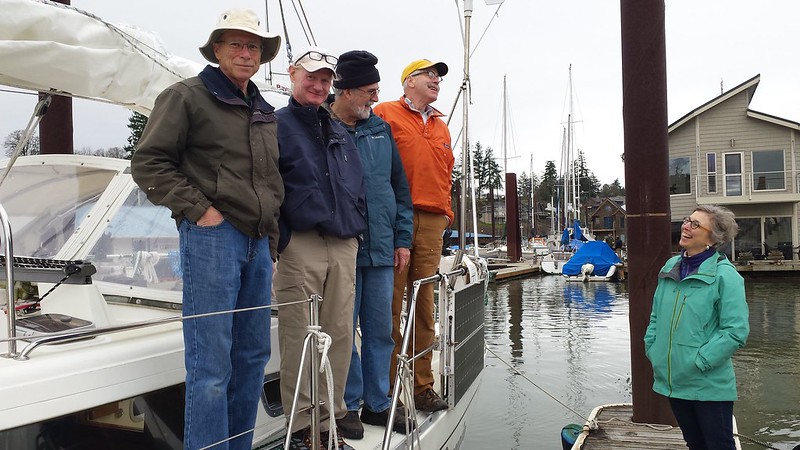 Above: Craig and the crew, ready to leave St. Helens Marina for the trip downriver to Astoria. Fern Elledge looks on.

Craig went along for the trip down the river to Astoria on Friday, and I drove down to meet them, have dinner together and then bring Craig back home. They had a good trip down the river, although the rain was a bit more driving than was predicted. Certainly as I drove to Astoria, it was through sheets of wind-driven rain.

Sequoia and her crew left Astoria midday Saturday, timed for the most benign current state on the Columbia River bar. Shortly after crossing the bar, they evidently crossed into a dense field of crab traps, coming right up to the edge of the shipping lanes. Unfortunately the line from one of the traps got wrapped around Sequoia's prop, and there was a lot of back and forth, vibration, and eventually they shook the line loose (we think). The trip up the coast was fast, with plenty of wind from the south, and a favorable current. In the evening, Craig and Mark had a conversation on ham radio, where they talked about the problem with the crab trap. It's always very satisfying to make connection by radio, and we were able to see them on the marinetraffic.com website, showing their position just off Willapa Bay at that time.

Sequoia reached Neah Bay in record time, midday on Sunday, March 5. They reported that they'd seen plenty of snow out on the ocean, and the visible coastline was covered with snow. It turned out the alternator had bit the dust during the voyage, probably due to the vibration from the crab trap line (Craig says it's a very poor design to be vulnerable to vibration like that.) They were able to spend the night at the dock there, and recharge the batteries before the final leg to Port Angeles.

Craig made some calls, and was able to get a replacement alternator ordered. As it turns out, we had bought this alternator 364 days before it failed, and it had a one-year warranty. When has that ever happened? Every other experience, the item fails a day or two AFTER the warranty expires, not a day or two before! So the replacement alternator came to us without cost. Evidently we were not the first such failure. There had been an interim design change to fix the problem, and the alternator we would be getting would have the newer design. 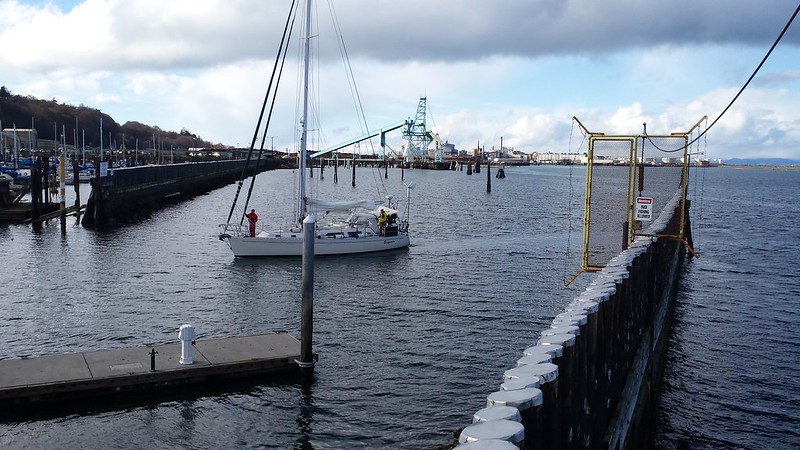 Above: Sequoia arriving in Port Angeles

We drove up to Port Angeles the next morning, and were able to meet Sequoia as she came into the harbor there. Craig was able to quickly unbolt the defective alternator, and we took that, and the three guys, home to Portland.

As I write this, we're preparing to make another trip up to Port Angeles, to get the new alternator installed, and take care of some other chores that have been awaiting a spare moment. Although it's pouring rain tonight, the forecast for tomorrow is pretty good, so we'll get up there early to take advantage of some promised sunshine.