Craig described for you the rather complex process of getting Sequoia onto the freighter Merwedegracht in Victoria, B.C. Aside from dealing with March weather in the Pacific Northwest, the main challenge was the ever-changing schedule of the Merwedegracht, due primarily to weather conditions in the Pacific Ocean.

With Sequoia and dozens of other boats on her deck, the Merwedegracht headed south out of Victoria toward the Panama Canal. The shipping company has been pretty good about keeping us abreast of the shipping schedule. The definite arrival of the ship at the Panama Canal was April 8 at 5 am. We eagerly watched the Panama Canal's web cameras and their AIS map showing vessel locations. We spotted the Merwedegracht easily on the AIS map - anchored with dozens of other boats off the Pacific entrance to the canal. We waited and waited (a friend said to us, "How many times a day are you checking the AIS?")

I didn't figure we could buy our plane tickets to Florida until we had a more or less accurate forecast of when the Merwedegracht would arrive at West Palm Beach. And of course, the later you buy your plane tickets, the more they'll cost.

Finally, in the late afternoon of April 10 we could see the Merwedegracht move on the AIS map. Now we, and several of our friends, began watching the progress, and switching to the Canal's webcams for the Miraflores Locks. It was completely dark by the time we could see the ship coming into the first lock. Needless to say the picture quality wasn't much. But we could read the name of the ship on her stern, and we could see what we think was Sequoia's mast. Yay! 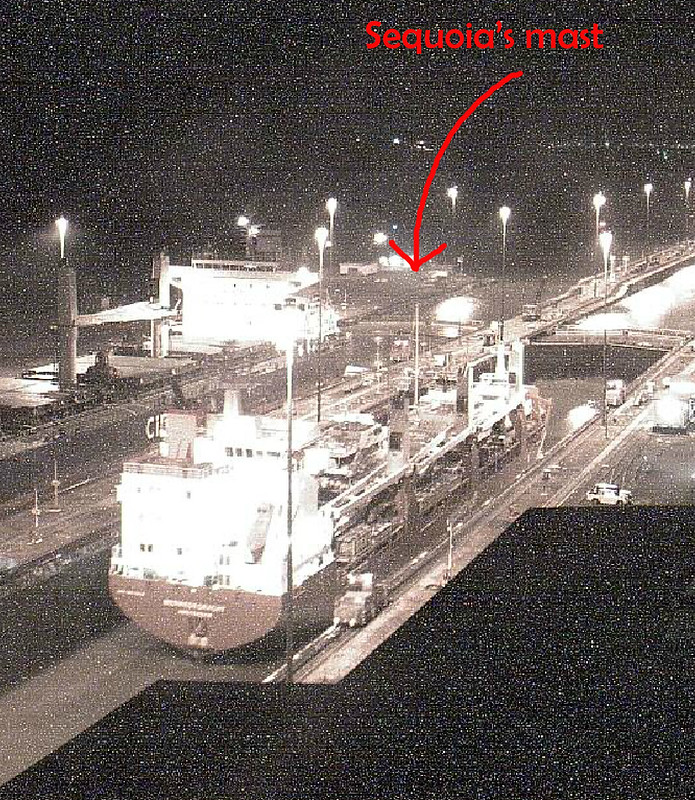 The ship was completely through the Panama Canal before we got up the next morning, and heading north toward Florida. Now, they told us that she would arrive at West Palm Beach at 9 am on April 15. So I ordered up airplane tickets... Couldn't be round trip because we had no idea when the Singelgracht would be loading up, heading out and arriving in The Netherlands.

The deal was that although the Merwedegracht unloads in West Palm Beach, the best freighter to Europe would be departing from Jacksonville. 250 miles up the coast. Our options were to hire a delivery captain to sail Sequoia from West Palm Beach to Jacksonville ($$$$) or to go to Florida and make the trip ourselves. We decided we might like doing that sail, and the price of air tickets was less than the cost of the delivery captain.

Merwedegracht did indeed arrive at a little before 9 am on April 15. We had intended to watch the arrival, but we were a bit late, and the ship was already in her slip. We walked up the nearby overpass, and got a fairly good view of the ship, once again spotting Sequoia's mast where it should be. 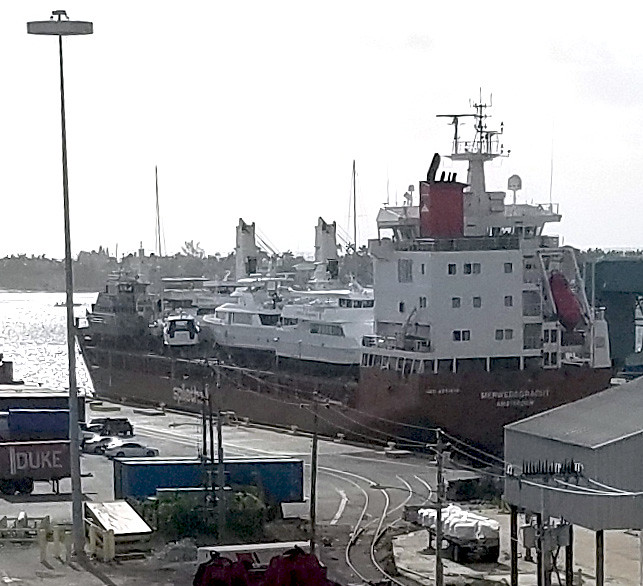 They allowed 2 hours for customs to go through the ship, and we were told that Sequoia would be lifted off at 6:30 pm, after 10-12 other boats. Unfortunately, customs didn't show up until 1 pm. The excuse was apparently that they had some duty to perform connected with Trump being here (The Merwedegracht landed about 2 miles up the coast from Mar-a-Lago.) (Humph!) We were given a new delivery time of 9:30 pm.

(We did not have a hotel for that night, planning on sleeping aboard Sequoia.) I did grocery shopping, including perishables for our trip north. Bought a couple of ice chests, filled with ice, put groceries in car. Hot car. This is a hot place.

At our hotel, a couple of miles away from the docks, we had met a British fellow, Peter, who was sitting by the swimming pool, reading a sailing book. Craig introduced himself, and it turns out Peter and his brother, Bob, were awaiting the arrival of Bob's sailboat ("Crazy Horse") on the same freighter. We quickly became friends, and had several meals together during the waiting. As it turns out, Crazy Horse was the first boat lifted off on the 15th. We were aboard the ship at the time, as we needed to remove the backstay for the unloading operation. It's pretty interesting aboard that ship. We saw the undersides of so many boats (including Sequoia). We also watched part of Crazy Horse's lift-off. Bob and Peter got their boat situated in the Riviera Beach marina and then offered to help us with the re-rigging that would be needed before we could sail up the coast. We expected the re-rigging could begin at 9 am the next morning.

But wait!! The harbor was very windy, with gusts to 25 knots, so the Captain decided, at about 9 pm, that unloading operations had to stop. What to do? There's not much you can do except accommodate to what's happening. So we went back to that same hotel, fortunately they had a room for us. We moved all the groceries inside, along with our other gear, and re-stoked on ice.

Another point of interest - the major group of guests at this hotel was the baseball team, the Houston Astros, who were in town for an early series with the Marlins. It's not that common to see so many good-looking, athletic guys in your hotel! Many seemed not to speak much English; if you tried to converse with them you would only get blank looks. If they were speaking Spanish, it was highly idiomatic. Perhaps it was Creole? These guys seemed to get up every morning at 5 am and splash around in the swimming pool, while holding shouted conversations full of laughter. But seriously, guys, 5 am?

Our new lift-off time was 9:30 am. Merwedegracht hired a little transport boat, run by "Captain John" to transport boat owners over to the ship, to receive their boat. We were supposed to be picked up by Captain John at 9 am. He was pretty late, and when we finally arrived at the ship, Sequoia was floating alongside. We didn't get to see any of the lift-off. Apparently Captain John wanted to watch the lift-off and his comment was that "they didn't tell me anything." 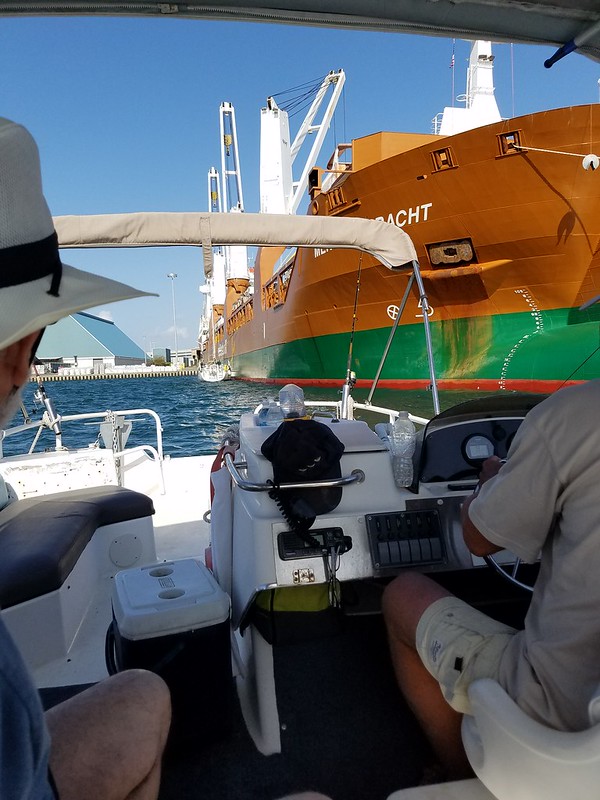 The next problem was that we rented a slip for April 15 at Riviera Beach Marina (closest to the Merwedegracht's docking spot), and we had no boat to put in it. ($$$) The next day, the 16th, when we were actually lifted off, we were told we could only stay in that slip until 11 am, when the slip's owner would be returning. A little bit of mournful talk with the office staff, and they finally allowed as how we could stay until the owner did actually get back - projected to be between 3 and 5 in the afternoon. Moreover, they would let us stay on the fuel dock during its closing hours (5 pm to 8 am). 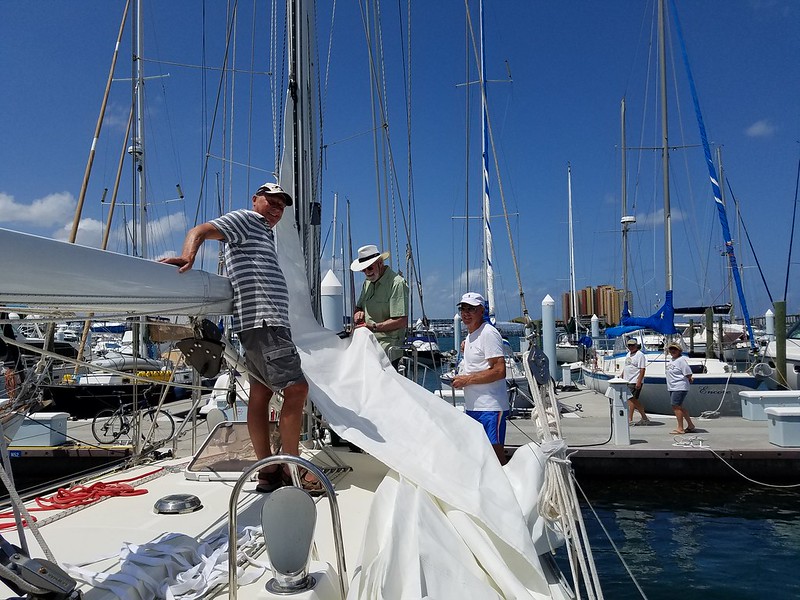 It took all of that day to get Sequoia re-rigged for the sail up the coast to Jacksonville. Peter and Bob came and helped us, and then we all went out for dinner (having given up our rental car that morning).

So we spent the night on the fuel dock, then left in the morning to anchor just off of a gilded village of Palm Beach mansions. Craig's computations about the trip north suggested that leaving West Palm Beach in the afternoon would be better. There are few boating strategies worse than arriving at a strange harbor in the dark. So we spent the morning doing boat chores, and got underway at about 1:30 in the afternoon.

Craig's computations didn't take into account the Gulf Stream. For about the first 8 hours of our trip it was whooshing along at 5 knots or more. Our normal cruising speed is 7-8 knots, but here, all of a sudden we're going 12-13 over the bottom! That had the effect of changing our predicted arrival time in Jacksonville to - you guessed it - the middle of the night. So once we were clear of the Gulf Stream, we slowed way down, putting up only enough sail to make 4 knots. At one point we hove-to and had a leisurely dinner while the boat went more or less nowhere. 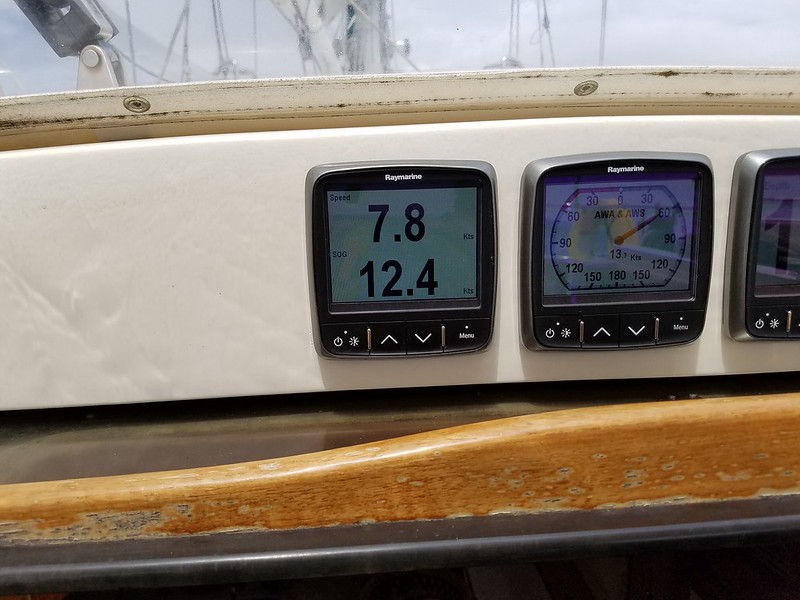 At one point during the passage, we were joined by a tiny Goldfinch. I was at the helm, and as I looked at the deck by my feet, I noticed the shadow of a bird. I turned this way and that, and finally spotted him (or her?) about six inches away on the backstay. There we were, eyeball to eyeball. Oh how I wished I had my camera, but I'm sure any motion would have startled the bird. He finally flew off to perch on another fitting and I called to Craig to get the camera. The little bird flew inside the cabin, and Craig was finally able to get some snapshots. Eventually, though, he flew off, hopefully in the direction of land (about 15 miles away...) 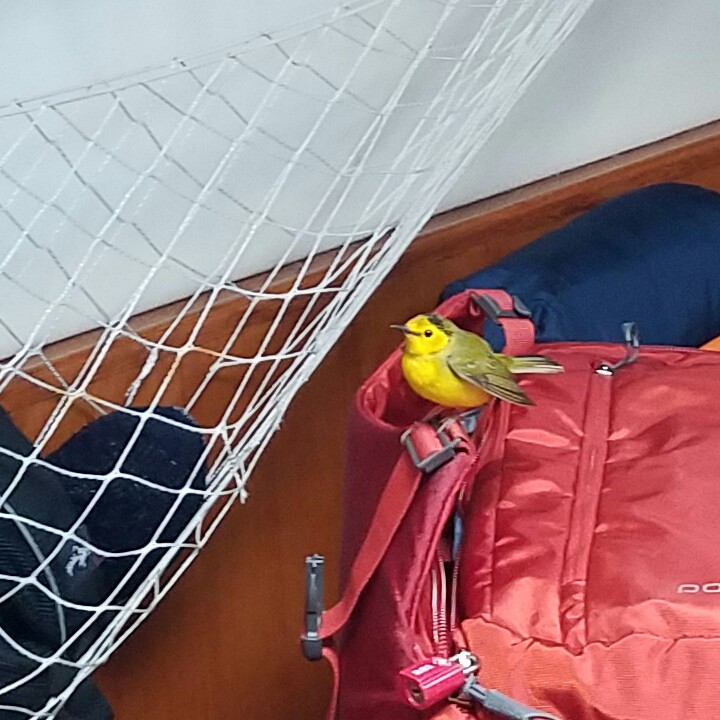 During the passage to Jacksonville, we saw plenty of dolphins and one sea turtle. I would like to have seen a manatee, but I guess they are not out in the ocean. The other interesting event was the launch of an Atlas 5 rocket at Cape Canaveral. The Coast Guard was on the air with all sorts of warnings. We were a little bit past the Cape when the rocket launched - We heard several seconds of loud rumbling noise, and a curvy cloud going up into the sky. It would be nice to have actually seen it!

We arrived in Jacksonville, indeed, at 6:30 am, just as the sun was coming up. The area where we will find the Singelgracht for loading is about 15 miles up the St. John River, so we found a nearby marina where we will prepare the boat for shipping, and will await word as to when that may be. We are maybe the only boat going on the deck of the Singelgracht, and of course no one can give us a schedule. We will suck it up, unrig the boat, and try to survive in the 80-degree weather and brilliant sunshine. Hey, we got our warm water vacation! Schedules still make you crazy. 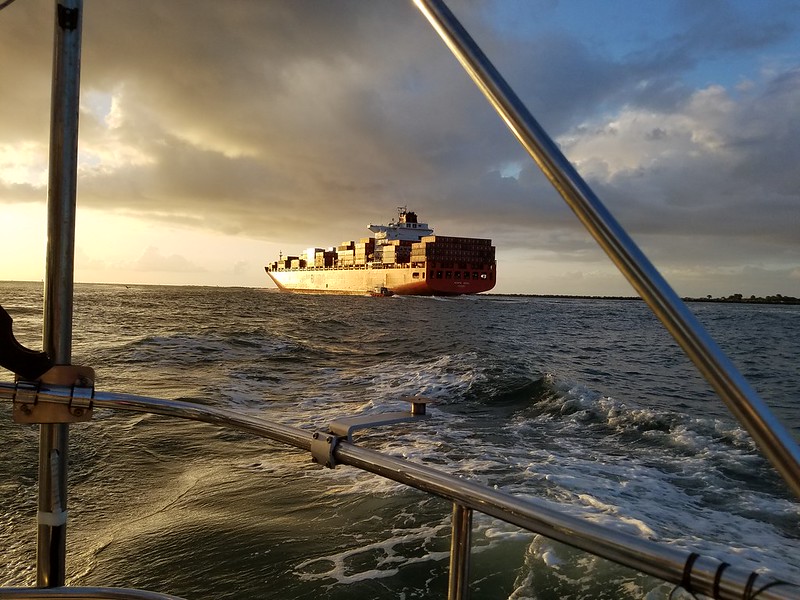 Above: Container ship departing Jacksonville into the rising sun as we entered the St. John River. 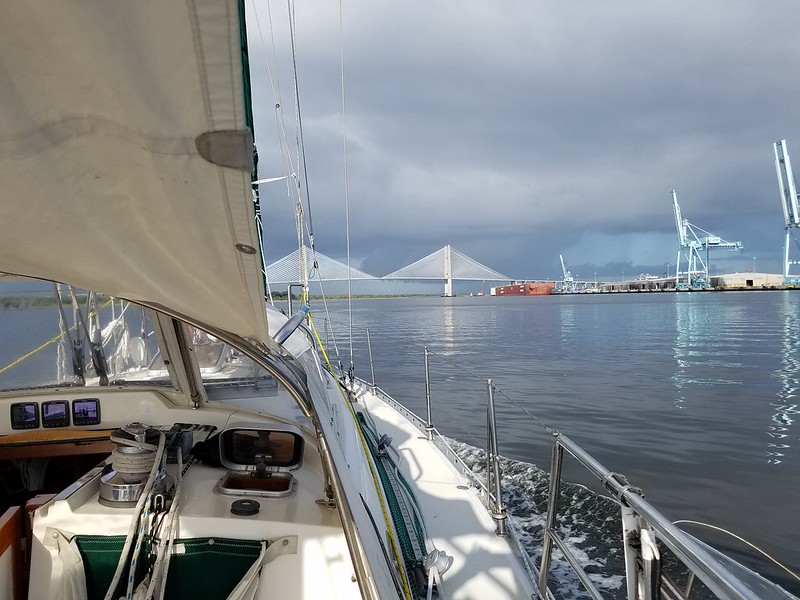