Preparation for Sequoia's ride across the Atlantic It seems so long ago that I wrote of our arrival in Jacksonville on April 19, yet I think it was only 3 days ago. So much has happened!

While we awaited word as to when we'd load Sequoia onto the freighter Singelgracht, we stayed at a small marina around the corner from the commercial docks. Seafarers Marina appears to be mostly live-aboard, populated by some fairly decrepit boats, plenty of small yippy dogs, lots of small noisy air conditioners, retired folks, and some poor working folks. They keep one slip open for visitors (that would be us). 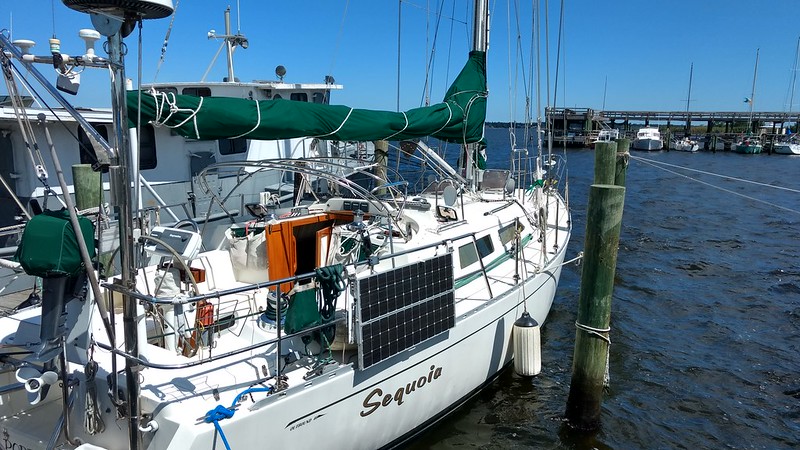 Above: Sequoia in Jacksonville berth

The tide rise and fall in this part of Florida is only about 3 feet, so they have no need for floating docks. The docks are instead fixed on pilings, and there is an occasional "finger pier" that steps down and extends part way out between boats. Otherwise the boats are moored to pilings on both sides, and to the main dock at bow or stern. When you arrive, you're supposed to catch a line to or from a piling on either side as you nose in or back in to the slip. This was a completely new experience for us, and we weren't very good at it. Fortunately the marina manager, Nikki, helped with the lines, and we managed to get Sequoia situated. After that it was a matter of acrobatics and Fate whether you had to step up or down to the little finger pier, and how far!

The other problem with the marina was the wind. While we were there we had to get the two jibs hoisted and then removed from their furlers and into their sailbags. The wind was strong enough in the afternoon that we just barely got the job done for the staysail (the smaller jib) and we gave up on the genoa. Instead we hired the marina manager's husband, Lee, to come around in the early morning and help us with the genoa. Lee is young and strong, and in the business of helping people, primarily through working as a rescue tow boat driver for Tow Boat US. Lee keeps his small, maneuverable, powerful boat at the marina, for just such purposes. Later that same day, after he helped us with the genoa, he headed out the St. Johns River to rescue a 47 foot sailboat. They were just starting on a passage from Jacksonville across the Atlantic to the UK, and their engine transmission failed as they went down the river. Better here than in the middle of the ocean!

While we were at the Seafarer's Marina, we spent most of our time preparing the boat for its upcoming passage across the Atlantic on the deck of the Singelgracht. Besides removing the two jibs, we had to remove the backstay to allow the Singelgracht's crane to lift the boat aboard, and rig running backstays to ensure the mast stays aloft without the backstay. The anchor had to be secured, the anchor windlass plugged and covered, solar panels folded, interior items secured against vibration (much as for a sailing passage across an ocean), and other large and small tasks too numerous for me to now remember. We decided not to remove the mainsail (which we had done for the earlier passage on the Merwedegracht) primarily because we knew that this time Sequoia would be placed in a much more protected position on the freighter's deck.

Concurrently with all this, there was considerable back and forth by email and telephone about the date of loading, the date of arrival in... Wait! The destination just changed! We received an email from our customs agent, and it listed the arrival port as... Ghent, Belgium. (We previously had been told it would be Eemshaven, The Netherlands, which is much closer to the Baltic - our primary destination this summer.) So we looked for a navigation chart that covers Ghent (we don't have any), and we resorted to Google Maps. Ghent, it turns out is 30 miles inland, past a couple of sets of locks, and without any apparent facilities for sailboats like ours.

Passage for a pleasure boat on the deck of a freighter is incidental for the shipping company. They are primarily driven by what cargo they carry in their holds, and where that cargo is being shipped. Evidently that is all decided fairly close to departure time. We originally booked Sequoia's passage for Southampton, UK; then it was changed to Eemshaven, and now to Ghent. We don't really have any option but to accept it and adjust. (I suppose our other option is to wait for a different freighter, possibly months from now, with our boat racking up moorage fees in Florida's hurricane zone. Not really an option.)

We rented a car to run errands, we did laundry, and we went to West Marine for a few last minute items. The hour was appointed for us to show up at the Singelgracht ready for Sequoia's lift onto the freighter: 5 pm yesterday. We planned to set out at about 4 pm for the approximately 3 mile trip around the corner to the ship. We asked the marina manager, Nikki, to help us cast off. She showed up with her husband (Lee, the rescue tow boat guy, and another fellow). There was a wind of about 15 knots blowing straight into the slip, and a good current was flowing the same direction. We should have been warned by the fact that three people showed up to cast us off.

We talked through the order of releasing lines, and Lee told us to "gun it." Craig, ever cautious, proceeded slowly, not wanting to scrape all the way out, removing a solar panel as we passed the pilings, like the barbecue fitting we had scraped off on the way in. We ended up 90 degrees to the wind, pinned against a piling, and Lee sprinted down the dock for his tow boat while the rest of us fended off. He roared up in his little tow boat, took a line and pulled us away from the pilings with no significant damage. Whew! 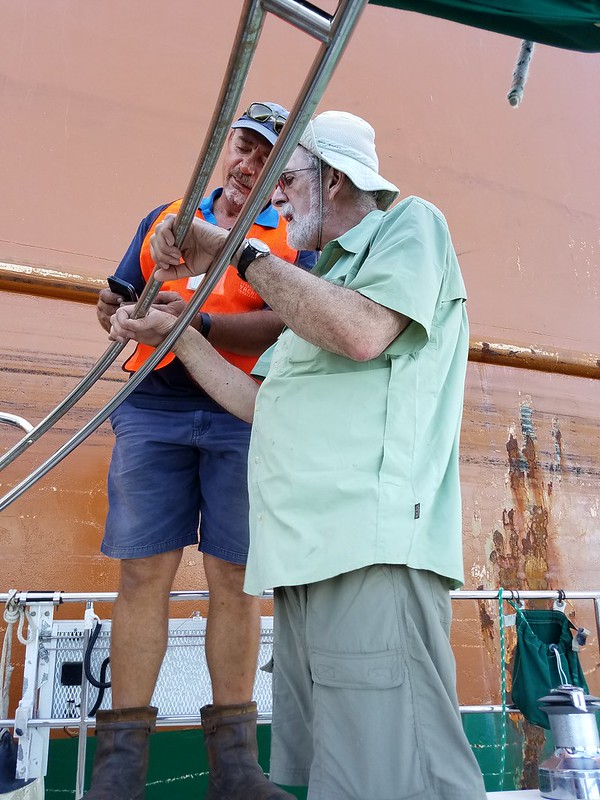 Above: Sequoia alongside the Singelgracht, Craig consulting with the loadmaster prior to the lift. 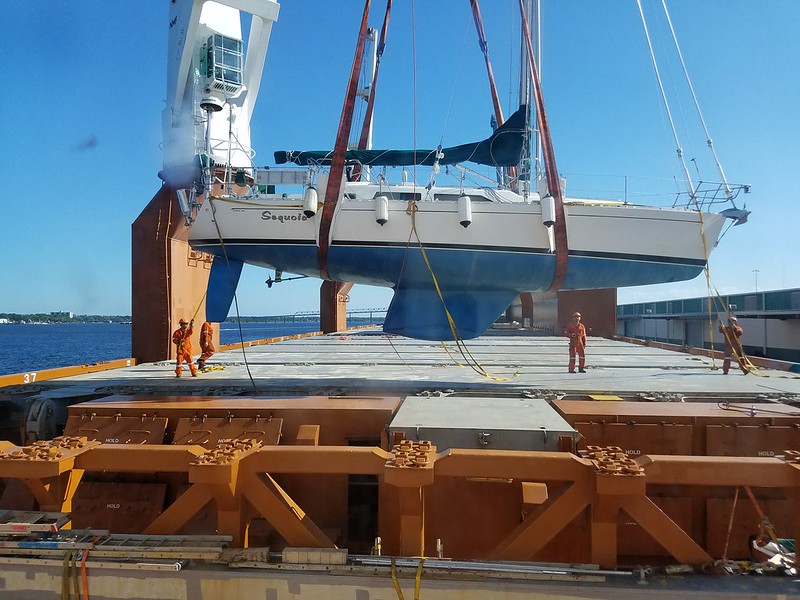 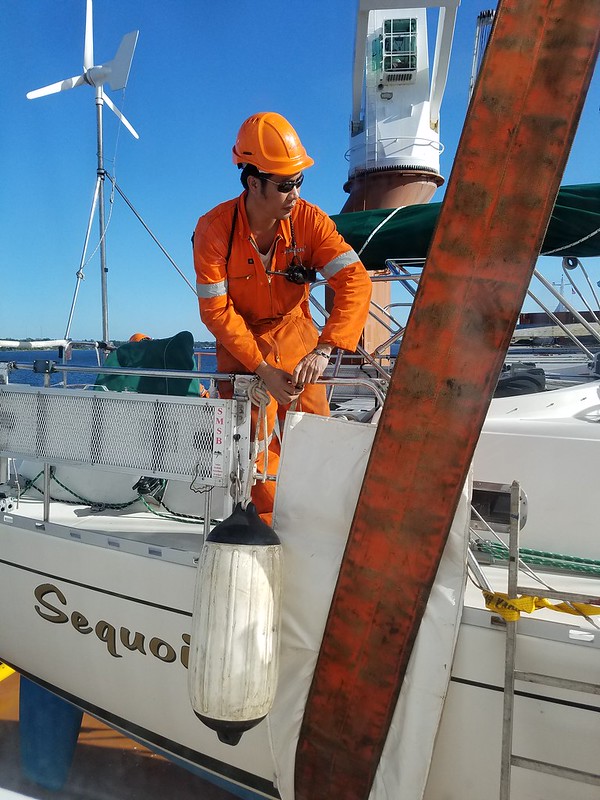 Above: Sequoia being settled into position on Singelgracht

It was fascinating to watch while they lifted Sequoia up and over the deck and settled her into place about six feet from the windows of the lounge/mess hall. We saw them place supports under the boat, strap the boat to fittings on deck, and release the lifting straps. Then one of the officers invited us to eat with the crew and we enjoyed a carbohydrate-rich meal designed for physically active young men: beef and peppers, rice, french fries, salad, soup and milk. The officers conversed in Dutch, and the crew (mostly Southeast Asian) ate in silence. We speculate that they may be from so many different countries and cultures that they don't talk together easily.

After we ate, and after Sequoia was firmly strapped in place, we climbed a ladder up onto the boat and made various arrangements to secure the boat for the passage. Craig restored the backstay and I removed and stowed bumpers. We were escorted off the ship and out of the secure port area, and found ourselves on a lonely street in a questionable part of town. We got an Uber ride to retrieve our car, and thence back to normality. 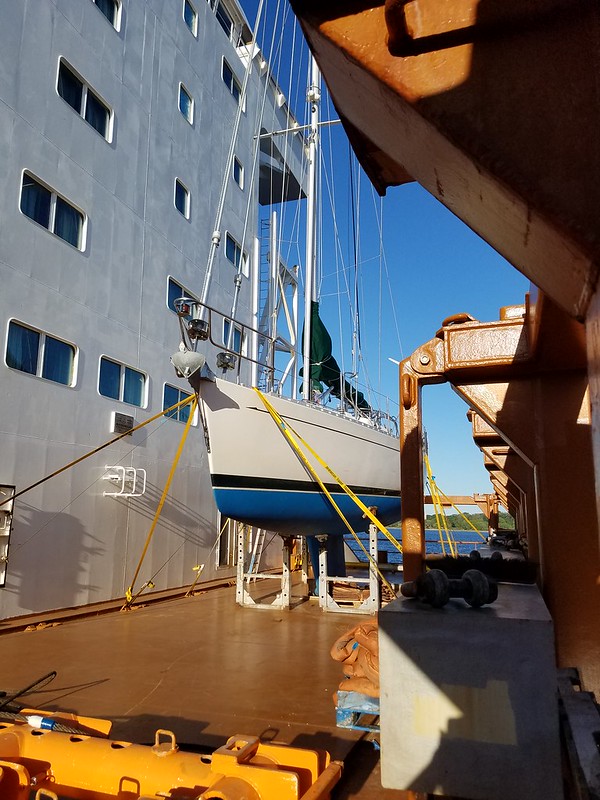 Above: Sequoia secured for passage across the Atlantic 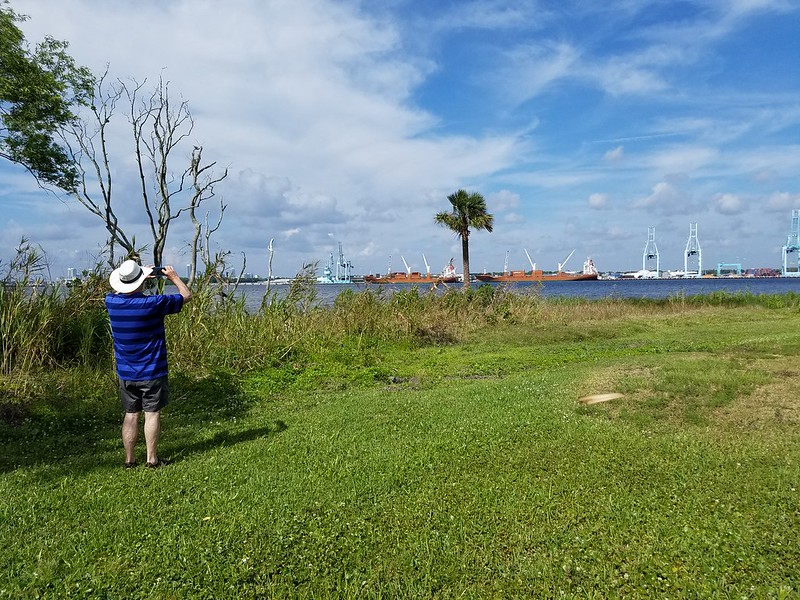 Above: Singelgracht and a sister ship from across the St. John River.

Today we find ourselves in Orlando, contemplating which of the overwhelming number of Disney and other theme parks we'll visit tomorrow, before returning home the next day.

It's been a very eventful 10 days since we left home. We are expectant and hopeful about our new adventures, starting in Ghent about 2 weeks from now! Never a dull moment.