A month has passed since we last wrote. You'll recall that we loaded Sequoia onto the freighter Singelgracht in Jacksonville, Florida. At that time we didn't know her exact destination nor when she would get there. At some point not too long before we had decided that the freighter might arrive as soon as the second week of May, so we bought our plane tickets for May 3 with the thought that we could be tourists until the boat arrived. We had about 10 days at home, which gave us time to do some final packing and get the house ready for our 4 months absence. There were instructions for our house-sitter, Dave Mangan, canceling the newspapers, doing some banking, getting plants set up for watering - you get the idea.

We successfully negotiated airports and sleeplessness and arrived in London on May 4th. Our tourist activities consisted mostly of nautical history - in Greenwich we toured the Cutty Sark and the Royal Observatory; in Portsmouth we visited Nelson's ship, the Victory, and two other ships, older and newer. We got started on our search for a marina and yard where Sequoia could be stored on the hard next winter, and we got lucky: the first one we looked at appears to be excellent: the Port Solent Marina just north of Portsmouth. The entrance to the marina has locks (something entirely new for us) because of the extreme tides on the south coast of England. Our other very interesting expedition while in Portsmouth was to the Isle of Wight where we saw Queen Victoria's "Osborne House" (where much of the upcoming film, "Victoria and Abdul" was filmed) and the much older Carrisbrooke Castle. We also saw our first ever "chain ferry" across the Medina River.

While we're doing all this preparation and touring around, we're constantly checking the position of the Singelgracht, and trying to find out when and where she's going. First she went to Wilmington, North Carolina, to take on wood pellets intended for a buyer in Belgium. There was a significant delay in Wilmington due to rain: the wood pellet owner would not allow them to be loaded if there was any rain at all. Once she got started across the Atlantic, there was constant back and forth with the shipping company about when and where she'd be docking.

Europe (not including the United Kingdom) has a visa rule (Schengen) that restricts visitors from outside the EU to 90 days in any 180 day period. The rule applies to people, not boats. So we were happy for Sequoia to arrive whenever, but we want to save as many of our 90 days as possible for summertime sailing (June-August). We didn't want to get into the Schengen zone to meet the Singelgracht any sooner than necessary, and yet - the longer you wait to book transportation, the more expensive it gets. The Eurostar (the 200-mph train which goes from London to various European destinations) is only £29 if booked 30 days ahead, but if you get within about 5 days of your travel date, it costs £120 or more. We finally just picked a date based on information we had, and traveled to Ghent Belgium on May 12, which turned out to be 4 days too soon. Ka-ching - there goes 4 days of Schengen time.

We stayed in a very interesting B&B in Zelzate (north of Ghent) called "Tolkantoor" which turns out to mean "Customs House" in Flemish. This was the old border crossing between Belgium and the Netherlands - the border is still there, but means much less in these days of the European Union. So the old Customs House was abandoned and allowed to deteriorate. A Belgian couple (the present owners) bought it in the 1990's and put a lot of work into restoring it and converting it into an art gallery and B&B. Very interesting. The B&B overlooks a small marina tucked into an old route for the Ghent-Terneuzen canal.

What an interesting thing the canal is. The Ghent-Terneuzen canal was originally a river and at some point in the 19th century it was turned into a canal with a depth of about 3 meters. The barges were pulled by draft animals along a tow path. Since then, the canal has been widened, deepened and moved westward twice, and each time the adjacent towns and fields have gained some land (the old canal routes) and lost other land (the new canal). 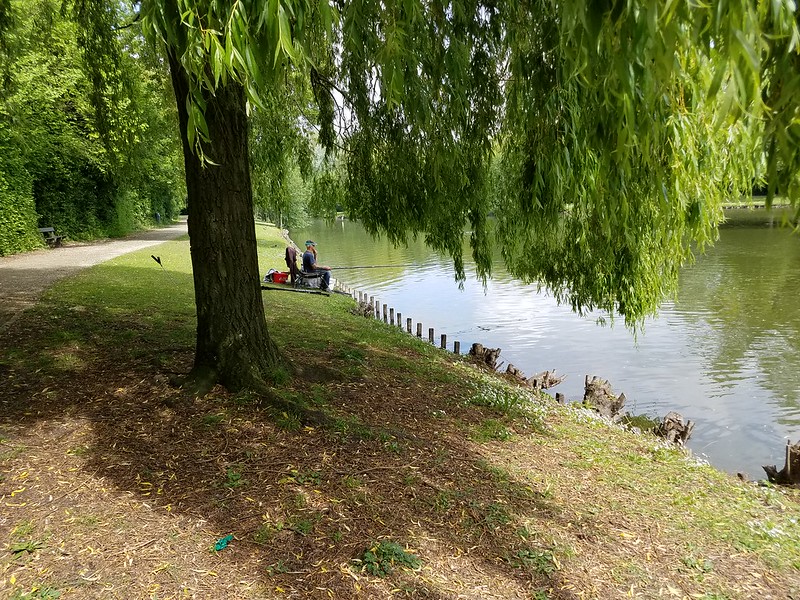 Above: Park created in a former canal location.

Zelzate has turned its newly acquired land into parks and other public space, but other parts of the old canal have been turned into marinas, boat yards, and temporary mooring spaces for all sorts of work boats. The little marina in front of the B&B Tolkantoor is one of those spaces. (See photo at the top of this page).

In the canal, there is an incredible amount of marine traffic. Oceangoing freighters (like the Singelgracht) go by every few hours. Long barges and canal boats go by at the rate of one every two or three minutes. The canal boats, which appear to be as much as 500 feet long, often have living quarters at the stern, and one or two cars on the deck above the living quarters. There is usually a small crane, which presumably is used to lift the car on and off the boat. One imagines a very interesting lifestyle. 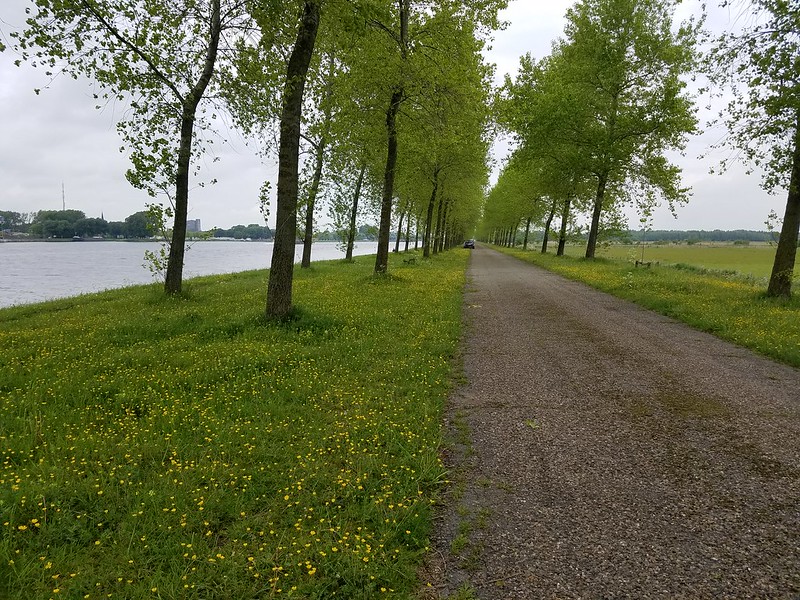 Above: path alongside the canal, just south of Zelzate 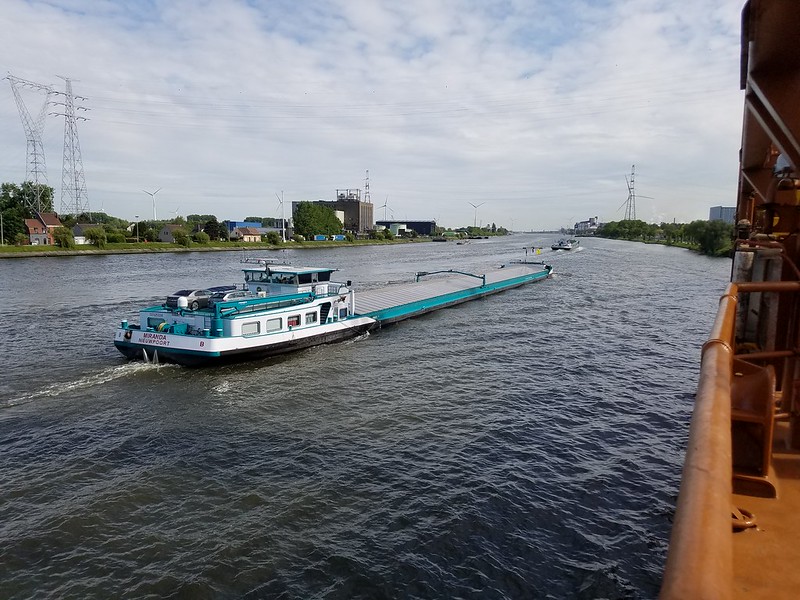 Above: Typical barge on the Ghent-Terneuzen canal


When Singelgracht was near, we got our hopes up, but there was no space at the dock, so they had to anchor out in the North Sea for a couple of days. They came into the canal on Sunday morning, and we went out onto the point to watch the freighter (and our boat) go past, heading for a dock about 5km upstream. 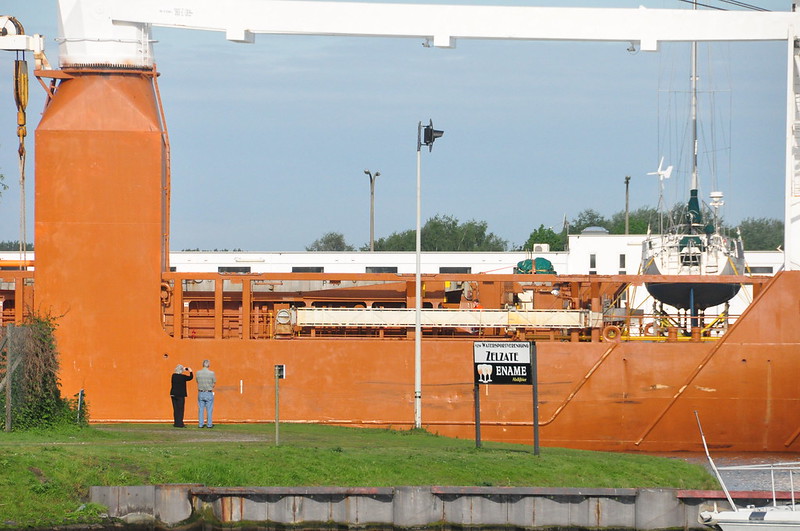 Above: Craig & Barbara watching as the Singelgracht passes by, on its way to the coal terminal dock, a few kilometers upstream.

We were hopeful that the boat might be unloaded that day, but it was Sunday, and apparently dockworkers get double pay, and must be present for the unloading, even though they do none of the work and just stand around and drink coffee. Moreover, the dockworkers would have had to have been contracted on Friday morning for the Sunday shift, and that hadn't been done.

Singelgracht went to a dock on Energiestraat, which turned out to be the coal terminal. (More about that later). The main cargo aboard Singelgracht was not our boat; it was a hold full of wood pellets, apparently intended for paper making in Belgium. The owner of the wood pellets was able to put more pressure on the shipping company than we were, and all those pellets had to be unloaded before they would unload Sequoia. Unless it rained. No wood pellets could be unloaded in the rain.

We went aboard the Singelgracht on Monday, to change Sequoia's rigging to allow the lift-off. When we reached the deck of Sequoia, we were alarmed to see a large quantity of coal dust on the boat. If you step on it, it makes a black smear. 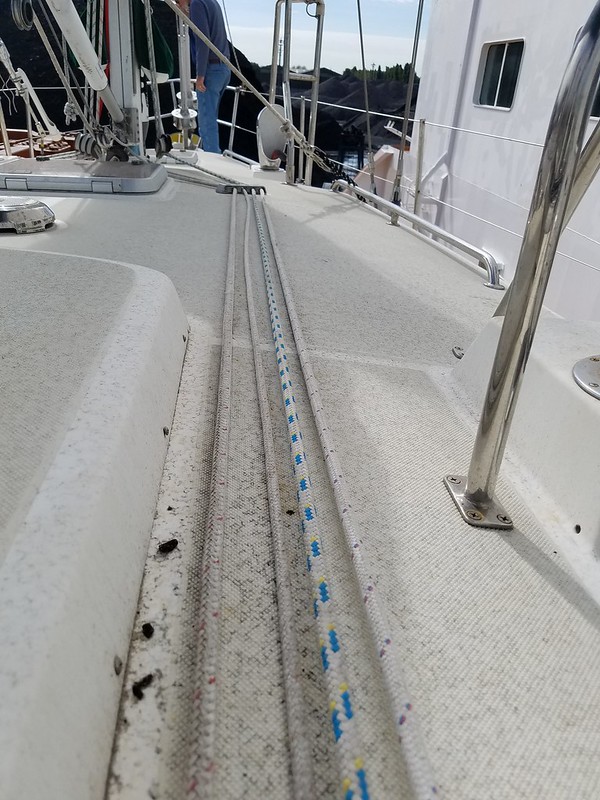 Above: coal dust on Sequoia's deck; piles of coal in the distance.

Monday afternoon it started to rain and they suspended the unloading of the wood pellets. We were hopeful that they would lift off Sequoia then and there. No such luck. They couldn't get the stand-around-and-drink-coffee dockworkers there, and there was complete uncertainty about whether Belgian customs had been there yet. (It later turned out they had, but left no paperwork, simply gave their oral release). (This matters, because Sequoia can only be in the EU for 18 months before VAT is payable - a tax equal to a significant percentage of the boat's value. If we have no entry paperwork, they might later claim we arrived much sooner and that the VAT was now payable.)

So we were told to come back Tuesday morning, which we did, and they were ready to lift-off our boat. There was now about twice as much coal dust on the boat's surfaces, because the weather was somewhat windy, and the big piles of coal dust were right there. (I'm hitting the keys extra hard as I type this... Grrr...)

The lift off otherwise went very smoothly, and Sequoia entered the water in excellent condition (but for the coal dust and the smears of the Singelgracht crews' boots). The shipping company has offered to pay for professional cleaning, and we sure hope it works. Every speck of coal dust left an orange stain. We vacuumed up all the dust particles, and the boat still looks pretty bad. This week, while we're traveling in England and Scotland, the boatyard next to the Tolkantoor B&B is undertaking to clean the boat.

We put Sequoia into that little marina in front of the Tolkantoor B&B, and did as much as we could to restore order. We decide not to put the sails on because of the cleaning process that's about to take place. So we'll have a big job when we return to Belgium at the end of this month, ready to start our grand trip to the Baltic. 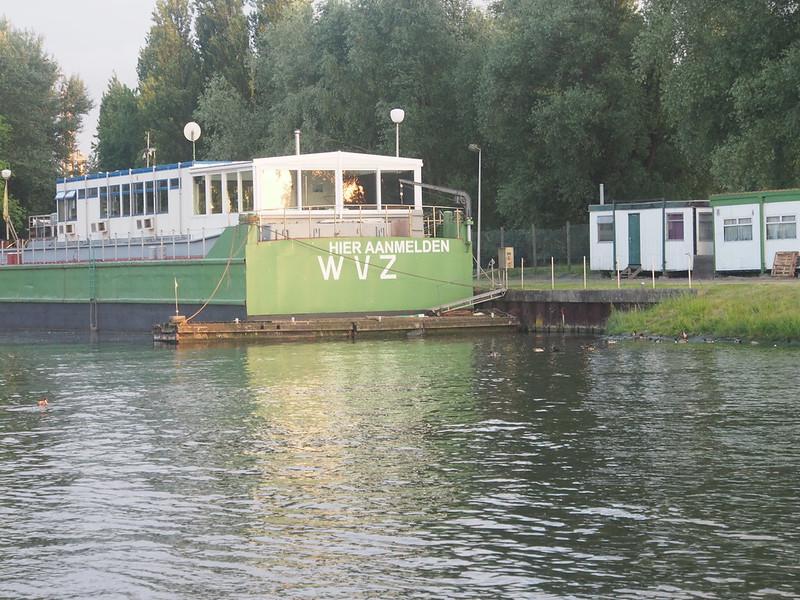 Above: the Zelzate Marina's "clubhouse"


The marina ("Watersportvereiniging Zelzate") is a low-key but colorful place. The clubhouse is an old river boat, long and narrow, with the house extended over the now inaccessible hatches. Each day, the Club's President and his wife show up at about 2 P.M. to open up, make a pot of coffee and have a beer with a couple of regulars, many of them retired live-aboards. Most of the boats are steel-hulled power boats, but a couple of modern sailboats share space. Freddy, the harbormaster, rounded down our length to calculate the rent, about $14 USD a day. There is a dubious toilet and shower on the clubhouse barge we haven't yet seen, and no pump-out facilities. This is "okay" since Belgium doesn't require holding tanks and none of the boats here have them. (On the other hand, once we move 50 meters north, we will be in the Netherlands, where there is a no-discharge rule...)

As we write, we are in York, and headed tomorrow for Scotland. We're having a grand time, despite some rainy weather. We're enjoying the adventure, with all its unexpected twists and turns.