We have just finished our first two days sailing in the North Sea, and it feels like the sailing part of our cruise has really begun. After motoring north from Ghent on the Ghent-Terneuzen canal, we locked through into the Westerschelde delta and ended up at Breskens, where the south shore meets the Atlantic. The Westerschelde is one of four great river deltas in the south of Holland and the only one that hasn't had its opening blocked by a dike or tide gates. Breskens, like many towns in the low countries, is a new city built over the ruins left by WWII. It felt like a cross between any seaside community and a planned village, but was very pleasant in the early summer sunshine. We walked into the village for supplies, and found an upscale cheese shop selling cheeses made on the family farm. (We bought both some young Gouda cheese and some very pungent 3-year-old cheese.) 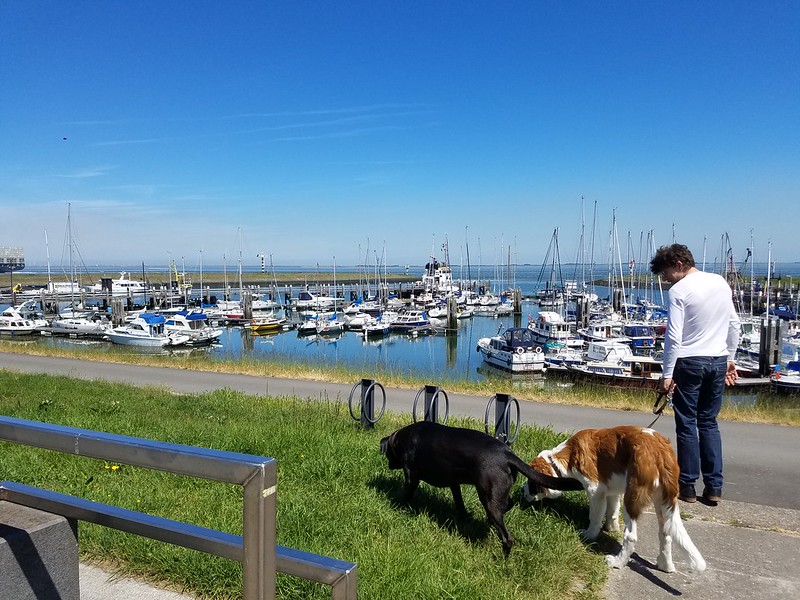 Above: The Breskens marina

From Breskens we headed Sequoia out into the North Sea to begin our journey north. This was our first sailing since coming off the freighter and we were pretty cautious, what with it being new waters--the North Sea!--and full of a never ending stream of tankers and freighters. As soon as we overcame the flood tide and got out, going was easy with 15kn of wind from the SW. We cautiously started with the staysail and one reef in the main which worked well as the wind built. We were soon making 7+ knots on a broad reach and even more over the ground as we picked up the generally north flowing current. 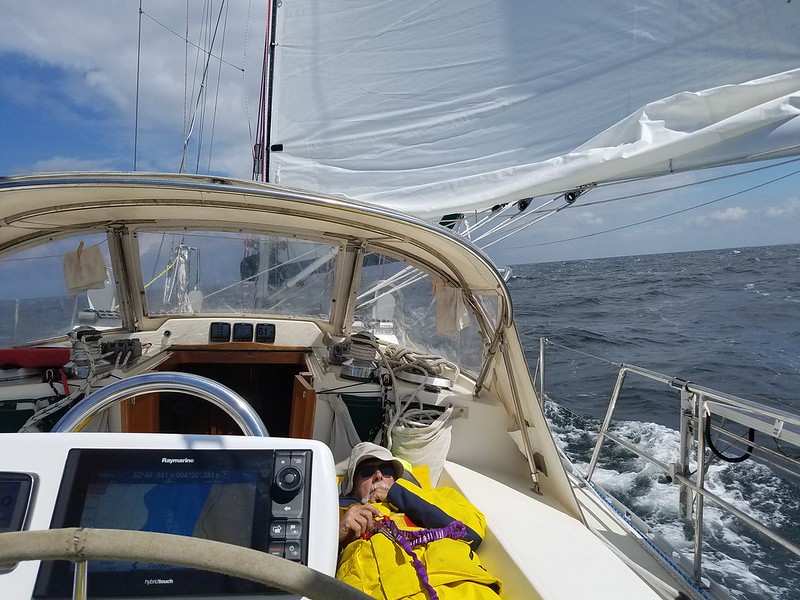 Above: Craig asleep in the cockpit, while the wind carries us steadily northward.

Our destination was IJmuiden, the port of Amsterdam, picked more for its distance (85nm) than its beauty. We got underway to 0600 and arrived at 1830 tired and cranky. The next day we cruised another 65nm north to Vlieland, one of the Frisian Islands. That was a shorter, easier day with the full genoa out on a broad reach and ending nearly dead downwind. The island is a tourist destination, low off the water with the wind whistling over its sandy beaches. We had a great dinner at the marina restaurant: shared caprese salad, beef brisket salad for Barbara, skewered beef kabobs with Indonesian sauce and veggies for Craig.

Some impressions of the North Sea so far: firstly, we have never before sailed 150 nm without getting into water deeper than 85 feet; the whole Dutch coastline is full of sandy shallows and narrow, shifting channels. There are defined traffic lanes everywhere for commercial traffic. Small vessels must cross those traffic lanes at right angles and with great caution. Each different port has its own VHF traffic control channel, listed on the Dutch paper charts but not on our CMAP electronic charts. (We were told in Breskens that our electronic charts, downloaded six months ago, are already certainly out of date. New Dutch charts were issued on June 1, showing new and changed buoy placements and even new coastlines, where the Dutch have been expanding their available land. We bought a set of some of the June 1 charts; we're now realizing we should have bought more.)

Above: A typical wind farm.

Vast wind farms are everywhere: some located on coastal land, some in the sea close to shore near each blocked-off inlet and some well offshore. Our track 2-3nm offshore still had us inside at least two tracts of 40 or so turbines. There are many nav buoys but also giant cubic structures on stilts looking like Star Wars ATATs, which turn out to be fog signals. Careful attention at the helm is mandatory!

We have been fortunate to have two days of sailing with the wind at our backs. With 25+ knots of wind yesterday, the seas were about 4-5 feet but closely pitched. The motion sometimes required two hands but Sequoia sailed dry and fast. Several times we looked at each other and commented how we would hate to be going the other way; it would have been slow and wet, with lots of crash and bash.

We are now holed up in the Vlieland marina for the next day or two as a front moves through. With periodic rain, 25-35 kn of wind in the harbor, force 8-10 (35-45 kn with gusts over 50) outside, and reported wave heights of 5 meters in the North Sea, discretion says to stay put. We have been aiming at meeting our former exchange student and family near Kiel in four days, but that is starting to look unlikely unless we make an overnight passage. Motto on Sequoia: "Schedules Make You Crazy!" For now, we will be content to stay put, relax and do boat chores, and keep an eye on the weather forecast.