04 August 2013 | Musket Cove, Malolo Lai Lai, Fiji
Since we have been here at Musket Cove for a while, we have met a lot of different people from all over the world, both tourists staying at the resort and other salty cruisers like ourselves. A few that we have become good friends with are John and Leanne from SV Red Sky and Dave and Suzie from SV Sidewinder. Almost every night, we meet up at the Island Bar, grill up some type of meat and share our feast with each other. On one particular night, after dinner, a Sandbar Beach Bonfire Party was organized. About one mile west into the ocean, is a sandbar that appears only during low tide and disappears at high tide. With a full moon lighting up the night sky and a low tide at 10pm, we had a perfect night for a party.

Even though we had a full moon, finding the sandbar at night and navigating around the reefs took us in a few different directions but we finally did find it. Big fire, music pumping, adult beverages consumed, people dancing made it a good time for all. Then, it started to drizzle and we could see the dark masses of storm clouds coming toward us. Most of the people got scared off and headed back to their boats, while a small group of us stayed and enjoyed the sight of the fire and the sound of the lapping water on the beach. We had to laugh because the only rain we got was just a small drizzle. After the fire burned down, we left the beautiful sandbar and made a straight shot back to Tanga. 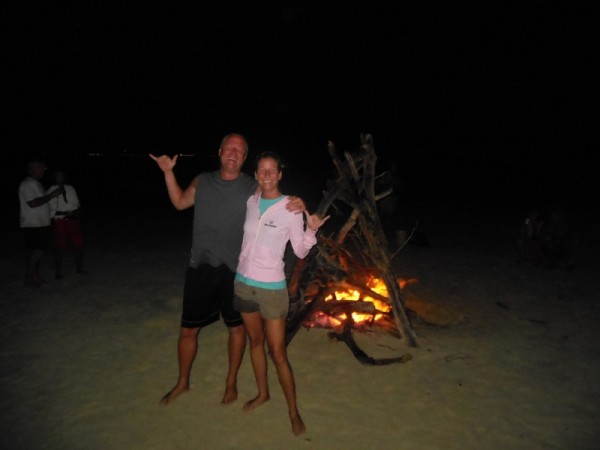 This past week has developed into one of those incredible weeks where nothing was planned ahead and everything was done on a spur of a moment decision. One morning, John, an Aussie surf bum, from SV Red Sky called us over the VHF and asked if we wanted to join them on their sailboat to go surfing, paddling boarding, and snorkeling with them. John has an extra surf board that he lets Tom use, so the immediate answer was YES. Fiji is one of the best known surfing areas in the world, with many many different world famous surf breaks that are about 40 minutes away from Musket Cove. Between and around the islands of Tavarua and Namotu is where all the action happens. Some of the local names for the surf breaks are: Cloudbreak, Wilkes, Restaurants, Desperations, Kiddies, Lefts and Swimming Pools. Dave, Suzie and their son Casey, who is visiting from California, came along also. While the guys were surfing Kiddies, us girls snorkeled the area, then did some paddle boarding. This was the first time I have ever tried paddle boarding. Since I have no experience with surfing or water skiing, finding the correct way to balance on the board was kind of tricky, also considering the water was quite choppy on this day because of the swells. I managed to start with just sitting and moved up to kneeling on the board while paddling. Accidently getting myself to close to the breaking swell, I had a great time going up and over the walls of water. Tom caught a few waves at Kiddies, got a few coral scratches on his foot, and a wicked bruise from shoulder to elbow when he was rolled by swells after getting caught inside, and learned that he needs to improve his talent of hiding in reef crevasses underwater as the swells roll over. 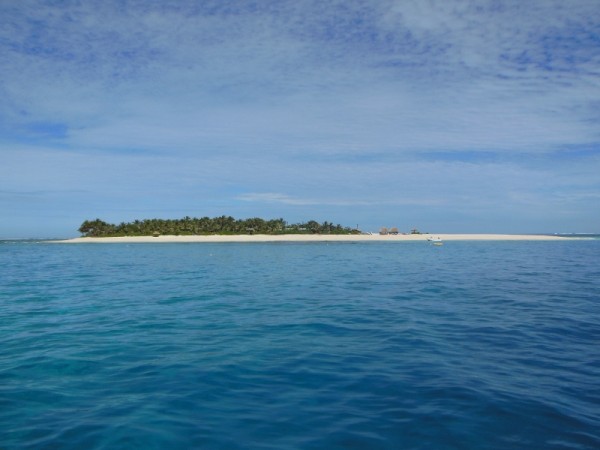 The following day was a great repeat of day one. We all headed out to Kiddies again except the swell was faster and steeper on this day. All four guys surfed, I snorkeled around, Leanne did the paddle board and Suzie played on her boogie board. We then moved over to Swimming Pool, where the surf was a little better shaped and longer lasting. The guys had a great time surfing Swimming Pools, and the coral and the fish were great for snorkeling. When everyone was done at Swimming Pools, we threw the snorkel gear and the surf boards in Red Sky's dinghy, with the paddle boards tied to the back of the dinghy, Leeann and I sat on the paddle boards, we were towed behind the dinghy, back to the mother ship, which was anchored off Namotu Island. Once back aboard the Red Sky, John hooked up a waterski tow line on the back of the dinghy, and Leanne and I did some skurfing. What is skurfing? Ya take a dinghy, a waterski tow line, and a surfboard. Tie it all together and it's like waterskiing/surfing all in one, while being pulled by the dinghy. I started by lying down in the surfboard and as the speed accelerates; I was able to get to my knees. I tried to do get to my feet while keeping my balance, but after several failed attempts, I was happy just enjoying the ride on my knees!! It's awesome to be towed over the reefs and watch as you skim along over the top in some of the most colorful water in the world! 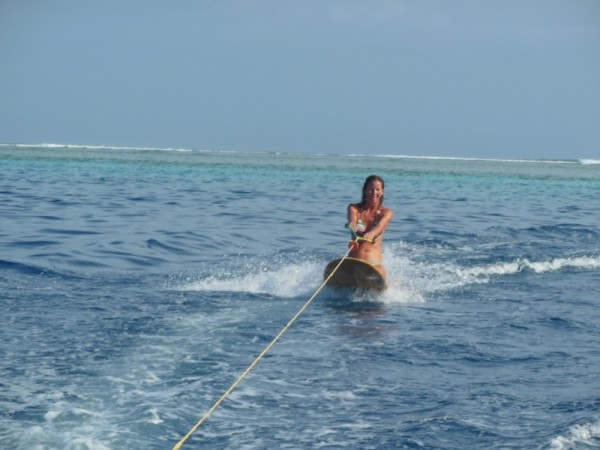 Again, the following day was a great repeat of day one and two. Everyone headed straight out to Swimming Pool. The wind was light, just a nice small breeze, which made the water crystal clear. The boys enjoyed a great day of surfing some long waves while we girls enjoyed the amazing clear water for snorkeling and paddle boarding. Since there was just a small breeze, I was able to stand on the paddle board and enjoy the views of the water, while watching the guys surf. Back aboard the mother ship in the late afternoon, we began celebrating such an amazing 3 days we all had together. After a few drinks, great conversation, dancing, and a beautiful sunset while being anchored off of Namotu Island, we headed back home to Musket Cove. The evening turned to night and party continued on Red Sky with the music pumping, lots of singing, dancing, and grilling up some sausages, eggplant and chicken wings. It was a great way to end a beautiful day in Fiji! 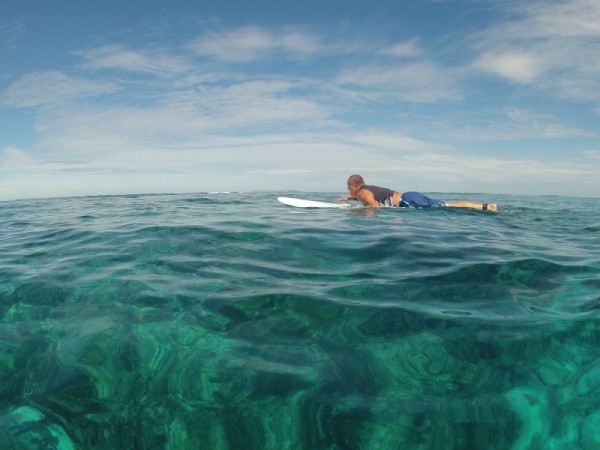 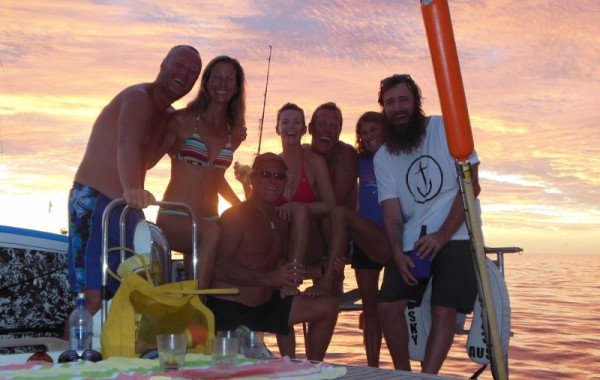 As you know, Tom has been itching to buy a surf board. And after using John's extra surfboard for those three days, we were past time to buy one for Tom. For the past several weeks, we talked and asked around to see if anyone knows of someone that has a surf board for sale. In our search for information, we came up with nothing. Our only option left was to head back to the main island of Viti Levu and go to Nadi Town. So, we motored Tanga over to an anchorage right off of Port Denarau, about 3 hours away. Our original plan was to stay one night in the anchorage so that we would have plenty of time to buy a surf board, do some food provisioning, and fill up our diesel and water tanks. By the time we dropped our anchor in about 12 feet of water, the winds began gusting above 25 knots and Tanga was bucking up and down by about 4 feet because of the big wind waves. We immediately looked at each other and said "we can't stay here tonight". The conditions would be too bad and neither of us would get any sleep with Tanga bouncing so much. We ran into Nadi Town, went to 2 surf shops and found the perfect surfboard for Tom and a boogie board for me. We also hit two other stores, one of which is a great butcher with some excellent tasting meat. We took the long, extremely wet, bouncing, and bone crunching dinghy ride back to Tanga. We immediately pulled up the anchor and got the hell out of there. 3 hours later, we arrived back to Musket Cove and was secured to our mooring ball again. Feeling the need for an ice cold beer, we took our freshly purchased Italian sausages and marinated chicken up to the fire pit and grilled up a wonderful dinner.

Yesterday, after the morning rain showers were past, we hopped on Red Sky again, and went out to Namotu Island again, to Swimming Pool. Tom was like a little kid at Christmas with a new toy and was dying to try out his surfboard. The swells were smaller today but Tom was able to ride some waves and get to know his new toy. Leanne and I did some snorkeling in a different area around Namotu Island. Besides seeing a huge amount of different reef fish, we saw an eel and a spotted sting ray. Last night, after we grilled up the last of our hamburger we bought at the butcher, we walked over to the other side of the island, where a pool table is located. We quickly found out that the pool table only accepts OLD $1 Fiji coins, not the new ones, only the old ones. Well, none of us had any old $1 coins on us, and the one lady, repeat, the one lady that we could get them from had already gone home for the night. BUGGER!! We walked back to our side of the island, and sat at a bar called Dick's Place and listening to some locals guys jam on their guitars as the whole table sang at the top of our lungs, all the songs (not a pretty sight, but FUN).

Our short term plans are to head up to all the west side remote islands, called the Yasawa Group, for the next month. We plan to swim with the mantas and hit many remote islands to get some more of the wonderful culture.

Our long term plans have changed! During last year's cruising season, as we sailed Mexico, the Marqueses, Tuamotus, Societies, and Tonga groups, we realized how much of the world we are missing as we try and see the world, thus we have decided to slow down and see more. Also, it took us longer than anticipated to receive and install our mechanical fixes. Thus, since Fiji hits almost all our "checkboxes" (GREAT, UNBELIEVABLE, AMAZING surfing! snorkeling, warm climate, remote lands and culture, modern conveniences, etc, etc, etc), we are staying in and around the Fijian islands till next year. While we're super stoked to stay, we also feel bad for some family members that we had planned on meeting in Thailand, but we hope they are able to change plans and meet us here, or that they still have a wonderful time in Thailand.