21 August 2013 | Musket Cove, Malolo Lai Lai Island, Fiji
For the past few weeks we've been looking for a weather window to explore some of the north western part of Fiji called the Yasawas. Last week we got that window. Although various weather sources indicated the winds would blow up to 25kts and make our anchoring uncomfortable, there was one source that said we would have settled weather. Since our friends on Red Sky were trying to do the same thing, we decided to "buddy boat" with them (they also have most of the uncharted reefs charted). After a lengthy discussion about the weather, we all decided to not believe the other sources and believe the one we liked and get a move on it.

After motor sailing for a while and watching the weather, John from SV Red Sky decided it would be best to tuck into a small bay next to an uninhabited island called Navadra. WOW!! The island wrapped around us on 3 sides but unfortunately was exposed to the swell. Because of the swell, the anchorage was a little rolly but otherwise great holding. We walked the beach for a while and ate a potluck between the two boats. Then it was off to shore for a nighttime landing in the surf for a beach bonfire. Since it's been awhile since any of us have slept in a rolly anchorage, none of us got much sleep. The next morning, after a quick swim, we pulled anchor and headed for Octopus Bay on Waya Island. 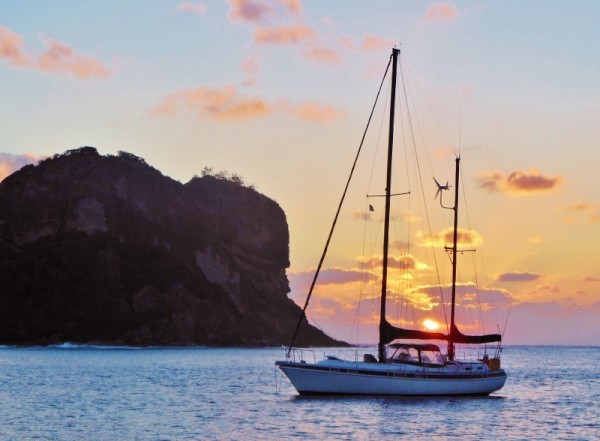 As we were heading to Octopus Bay, the swell stayed in the same direction so we all decided (based on Red Sky's local knowledge) to skip it if we wanted to sleep that night. We decided to go around to the northern side of the island and drop anchor into a nice flat calm anchorage with very light wind and virtually no swell. About 5 minutes from the anchorage, Red Sky caught a LARGE fish and invited us over for fresh fish dinner that night; Fish & Chips, Aussie style. While John and Leanne went into the village to drop of the extra fish they had, we went dingy fishing but we had no luck. Then all 4 of us went snorkeling on a wonderful reef with great visibility. Waya is a beautiful place that we hope to return to in the near future. The island of Waya is very much like the Marquises islands with the sheer volcanic walls and large spires. It was breathtaking to see in the morning and evening light. It was also nice to wake up to our morning coffee and hear the roosters. That is something we haven't heard in a long time. 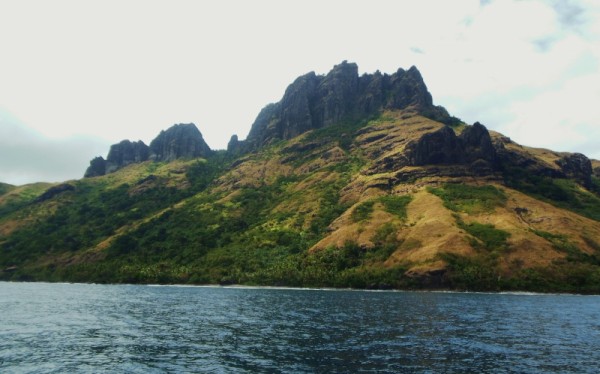 The next morning we were off to Manta Ray Bay. The typical (safe) route is to go around the island and tuck into the beach for a nice anchorage. But since we were following a crazy Aussie with great local waypoints and knowledge, we just cut right through a tiny pass that Tanga normally wouldn't take its dingy through. It was VERY shallow and Tom stopped breathing until we got to the other side. After going through it, it was decided that it wasn't that bad, but we had never gone through that shallow of a reef before. Once the hook was set, we grabbed the snorkel gear and headed for the pass where the Mantas feed on the drifting plankton.

The pass with the Mantas was amazing! Not only did we swim with Manta Rays, but also many different schools of thousands of fish. That is no exaggeration, thousands of fish! We were surrounded and swimming inside schools of Blue, yellow and sometimes green fish. During the second dive, we swam in a bait ball of herring. Again there were thousands of individual fish circling above, around and below us. Just awesome! 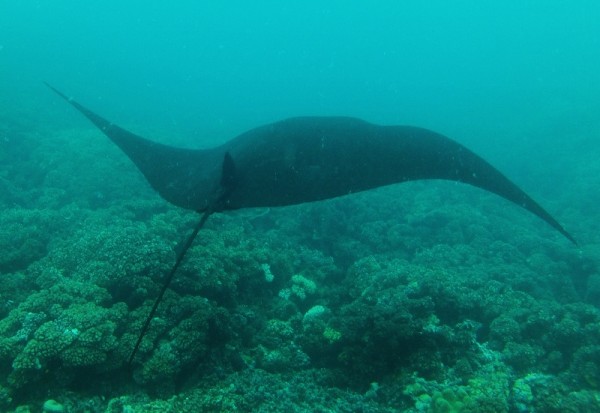 The Manta Rays come to this pass because the current is strong and they just "hover" and let the plankton come to them. As we floated with the current, we would fan out until someone saw one, then swim towards it and watch it. They were majestic to watch as they slowly moved their wings. The color contrast from the flat black top to the all white mouth was neat to see against the blue water and different coral. We did several dives that day then headed off to a small backpackers resort around the corner for pizza. This was the best pizza we have had in Fiji yet. After that, it was back to the boats. The girls got a nap while the guys went snorkeled an area of coral right off our boats. The guys said the snorkel was great and we (the ladies) should try it. That night was full of eating and playing Farkle on Red Sky. 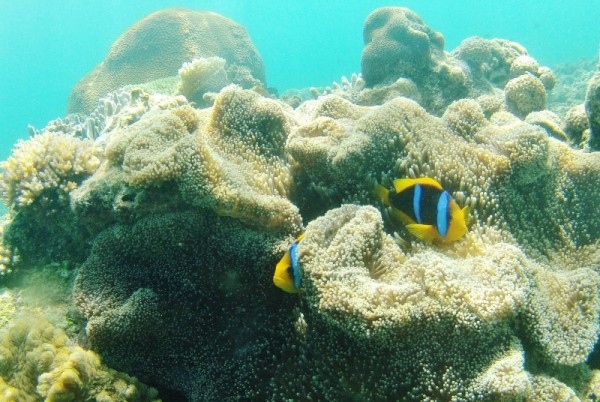 The next day we woke up, grabbed the gear and went off to the Mantas again for some more fun. The sun was bright so the different coral and fish colors were even more vivid than the previous day. The pass was literally crowded with fish. Then we went to a secluded beach and had a good time walking and playing silly Aussie games like hit a floating coconut with a rock. I know it sounds pretty easy, but that coconut was bobbing up and down and floating away with the current. My awesome hubby was the first and only person to hit it. 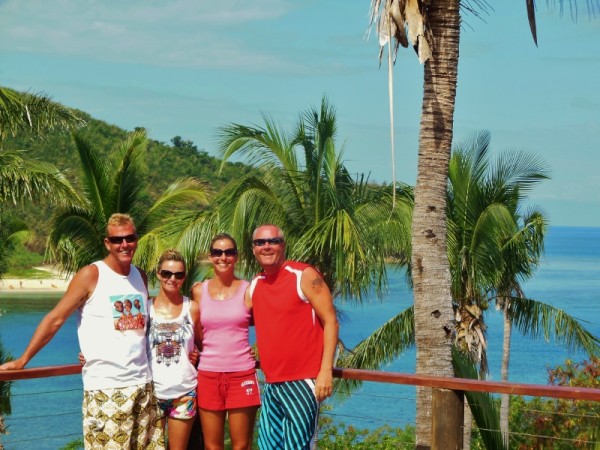 After all that fun, we headed to Vuda Point, on the main island, and secured our hurricane cradle and restocked our fresh food stores.

Back home at Musket Cove, we've been surfing most every day with our friends John and Leanne. Tonight Tom is making blackened fish with some more of Henry (the fish John caught in Waya), Monica's peach cobbler for desert and Leanne's famous tater stuff. Tomorrow is filled with chores and the reward of a beer butt chicken for dinner in the sand.