The week started with a stop on the main island to replenish the food and beverage stores. We anchored in a nice bay called Saweni Bay. We had wonderful anchor holding and spectacular views of the high Fijian peaks and mangrove swamps. However, it is sugar cane harvest time here, thus we got some soot blown onto the boat. After a nice night of relaxing, it was off to the shops for the gals while Captain Tom went to immigration to extend the visas. The visa extension at the airport office was very fast and efficient.

After provisioning, we (Monica) put everything away and prepared for the week ahead. As the sun rose over the mountains, we pulled the anchor in no wind and headed for the Blue Lagoon. As we had no wind, we decided not to pre-rig the sails, OOPS!! A couple hours into the trip, the wind started coming up and we had a very rolly ride for the next 3hrs. Lesson learned; ALWAYS prep the rig to sail, Tanga is a sailboat!

Once we arrived in the Blue Lagoon, it was remarkable. Yes, this is the location where the principal photography was done for the movie. We were just surrounded with perfect scenery and wonderful clear waters. After a restful sleep, it was time to go ashore to the beach with friends and play. After some games of beach Bocce ball and some water games, the ladies drank champagne under the beach umbrella while the guys sat in the water drinking their beers. Magical times. That night we went ashore to a resort and enjoyed a couple foo foo tropical drinks and enjoyed watching the sunset between the islands. 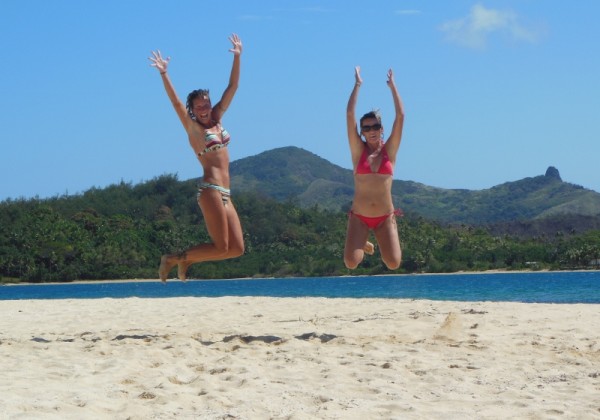 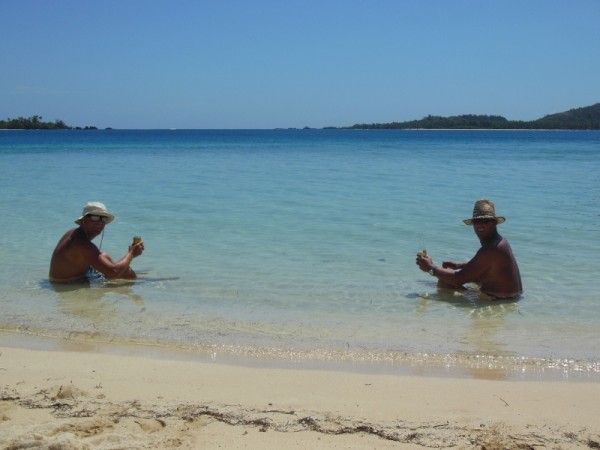 The next morning, it was time to pull the hook, then negotiate the southern reef passes and head farther north to Yasawa Island. Across the lagoon from Yasawa Island, is the island of Sawa-i-Lau. Sawa-i-Lau is a limestone island that is just over the top with beauty. It's also remarkable (to Tom the geek) in that it's a limestone island surrounded by 299 islands of only volcanic origin.

During our exploring in the dingy with John and LuLu, we discovered a limestone cove that was just amazing with crystal clear water and surrounded by unbelievable views in every direction. After a nice swim, we headed back to the lagoon for a snorkel amongst the soft corals. Tom was able to swim with his first sea horse and scared a blue spotted ray as they both came around a coral head and almost ran into each other. Then he saw an 8 foot "thingy" that looks like a rattle snake with eight 4 inch tentacles for a head. Our guess is it was a type of sea cucumber? 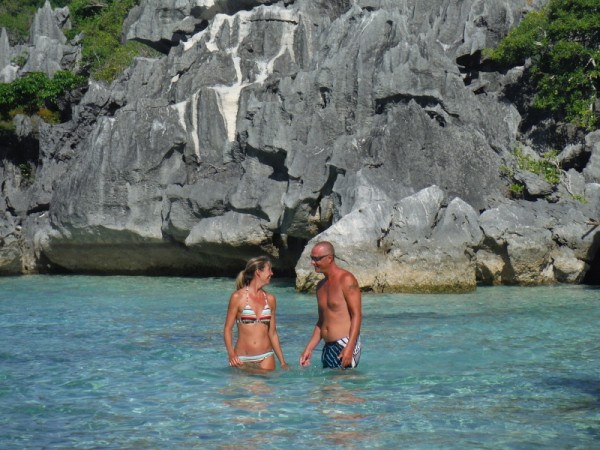 Later that day, we went to the village to present our Kava to the village chief and ask permission to stay. This is referred to as the sevusevu (pronounced "say-voo say-voo) ceremony. Since we had two boats (Red Sky and Tanga), we had to each present the Chief with a bundle of Kava root. Once that was done, and the ceremonial prayer/song was complete, permission to fish in the lagoon and walk freely amongst the village and island was granted. We were given permission to wear our sunglasses but asked not to wear our hats within the village. On our way back to the dingy, we stopped at a table with several villagers selling various items and donated some coin to the local economy. John convinced them that Monica was a fun name to say and now all the villagers yell MONICA every time they are within ear shot of her just to see her response and her smile. 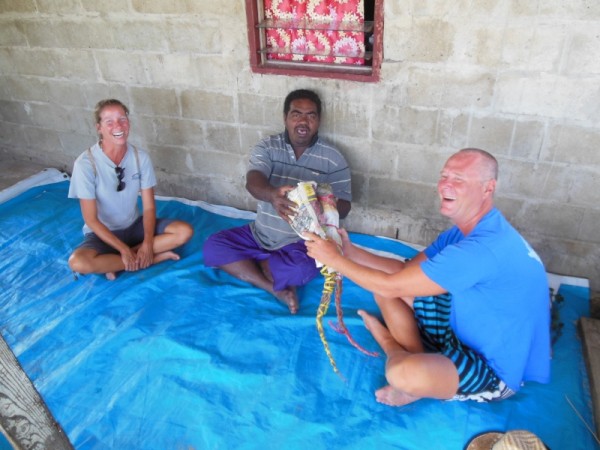 The villagers live in what people in the "modern" world would consider abject poverty; however, these are the happiest go lucky people we have ever met. They are always smiling and laughing and playing. As you walk past, they will always engage you with a pleasant hello (Bula) and invite you into whatever their doing and inquire about you with genuine curiosity. Regardless of what they are doing they will stop and always do this. It just goes to show, money doesn't buy happiness.

Part 2 to follow on another day.
Comments
Newer Older
Contents