26 September 2013 | Musket Cove, Malolo Lai Lai, Fiji
Last week was the 30th Annual Fiji Regatta Week. This event is the last event before the Kiwis and Aussies start heading back home. It's been a fun and active week for the Tanga crew.

We started the week with our buddies on the Red Menace (SV Red Sky) for the Pirate "race" to the Beachcomber Resort/Island. The first order of business was to do our best to dress up as pirates. We were weak on costumes for this so we donned a couple bandannas and said ARGG Matey often. Then, everyone jumped onboard the participating vessels for the lineup to start.

Chaos ensued!! Roughly 15 yachts, each with 6-30 people aboard, spent the next 30 minutes trying to lineup broadside to each other, as close as possible, to water bomb each other with water filled balloons, hoses and anything else that could be thrown at each other. It was all fun and all the captains did a marvelous job of dancing in VERY close quarters with millions of dollars worth of yachts while avoiding collisions. One boat was even throwing water soaked unused toilet paper!

Once the race horn sounded, all the vessels pointed in the general direction of the resort and settled in for a wonderful sunny day ride. Upon arrival, we were greeted by the staff with more water bombs and a trip to the jail for the obligatory gulp of grog before being released to pilage the island. Games of tug o war, limbo and a dance contest were the order of the day after the buffet lunch. After much grog consuming, it was back to the yachts for a perfect sail back home. That evening, the Island Bar put on a pasta dinner that didn't sit well with Tom for the next day. 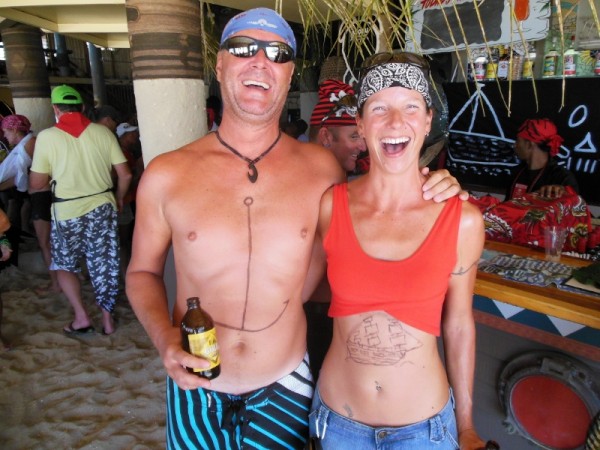 In the morning, we left Tanga for the beach where a hobie cat race was organized. During the bracket style knockout competition, we were scheduled to race after a two hour wait. Well, since the waiting area was the bar, we had a few beverages prior to our start time, this didn't help our ability to sail. We jumped in our hobie and immediately found that the previous racer had left all the lines tangled up. Then, while trying to point to sail, we discovered hobbies don't point like a "normal" vessel and immediately put it in irons. As we were getting close to the first mark, the other team was already crossing the finish line! Bugger, but we finally got the hang of it and finished a couple minutes behind. 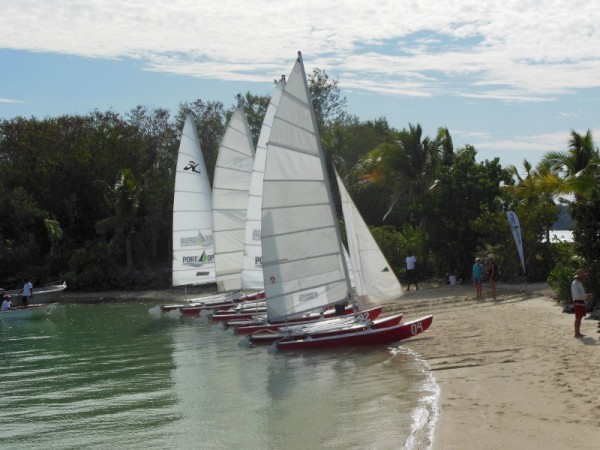 The next day we entered the "crazy" Olympics and had some good laughs with all involved. Then it was off to make dinner and get ready for the "T" party. The theme was to come dressed as anything starting with the letter T. Monica went as a Tropical girl and Tom went as Tinkerbelle with wings, halo, wand and skirt! This brought huge laughter from the staff who are used to seeing Tom in his surf shorts and no shirt. The winner of the event was John as a Transvestite! It was funny seeing the two biggest guys there, dressed as chicks. Many laughs were had by all. 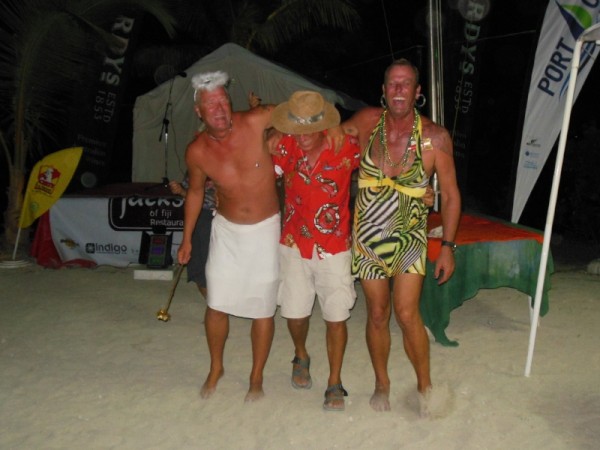 Once the pig roast, on the final day of the regatta, was complete we settled back into our normal routine. While snorkeling the other day a school of cuddle fish came by to check us out. We had fun checking out how they change colors based on threat level, and even prompted them at one point to squirt their ink. The funny thing was no matter how we taunted them into changing colors and shooting ink, they kept coming back to us, just as curious about us as we were of them.

Our near future plans are to head up island again and check out some new sites. But since we have a trough of low pressure sitting on us we'll be staying here for a few more days of snorkeling and surfing.