Today we were up bright and early and headed to land for showers and a good land based poop. LOL! Not sure when that opportunity will present itself again so you take advantage when you can. Once we were all done, we headed over to Ananda's store for more of those delicious cheese rolls and ICE! Ice is a precious commodity when you live on a boat.

Today we will be heading from Malolo Lai Lai to Navadra. Navadra is an uninhabited island in the Mamanuca group of islands in Fiji. I believe this was about a 4 hour motor from Musket Cove to Navadra. Upon arrival, the first sense you have after turning into the cove/lagoon is that you have reached paradise as it was intended. Well, it is definitely MY IDEA of paradise. The water is 3 to 4 different shades of blue, from deep navy to turquoise to almost clear as your eyes move closer to shore. There is a large volcanic rock formation at one end of our anchorage and lush greenery on the other two islands that make up the "cove or lagoon". Tom told us that the island is known to have goats on it. No one really knows where the goats came from but, sure enough, while we were sitting on Tanga enjoying the scenery and preparing to snorkel, we heard the bleating of a goat! After closely checking the shoreline, I finally saw the little fella! He looked tiny but, that could have been because we were far away. He hung out on the beach for a bit and finally made his way into the foliage. We never saw him or any of his friends again. 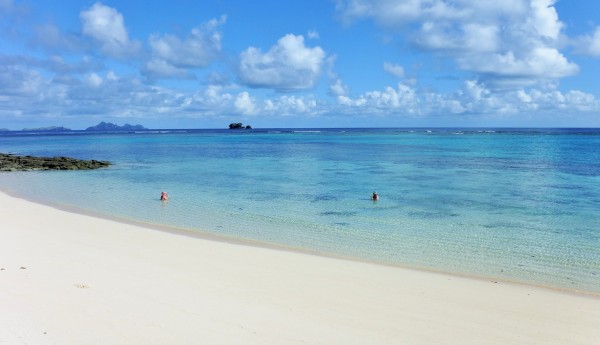 We proceeded to hop straight off of Tanga into the water for a snorkeling adventure since we could see a lot of bommies (that's what they call mounding coral in Austrialia) all around us. This snorkel location topped the previous with its huge coral. We saw a lot of fan coral here. We saw more of the same bright colored fish and we even got to see a black tip reef shark. After we wore ourselves out snorkeling, we loaded up the 5 gallon bucket with beer and ice and dinghied over to the island. It was simply breathtaking. Tom navigated us through some coral until we were about as close as were going to get to the shore. Monica set our anchor and we proceeded to make human feet print on an otherwise undisturbed sandy beach. I still don't know that it has sunk in that we were on an island with no other people anywhere around. We tucked the beer up in the shade and the four of us plopped down in the crystal clear water enjoying the coolness of the water and watching the waves break on the outer reef. After spending the afternoon relaxing, we took our empty bucket and headed back to Tanga. On our journey back, we spotted some big black flying creatures. They looked like birds to us but, Tom told us they were nicked named Flying Fox Bats. They are the largest bats in the world and there were a lot of them. What a treat to get to see them! After a dinner of chicken fajitas, we hit the hay to prepare for the next day's adventures! 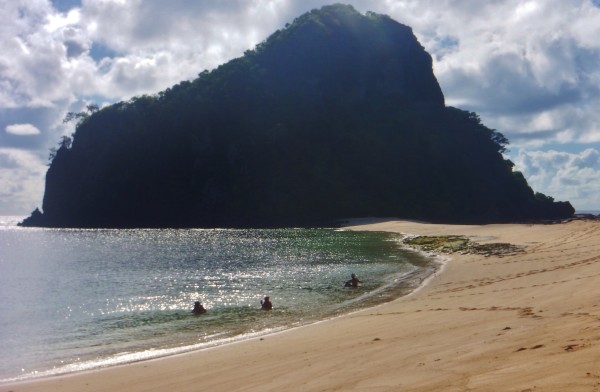 It should be noted that we trolled for fish the whole way from Musket Cove to Navadra and were skunked again.

Up early again. We had a delicious breakfast of coffee, PB & J and sliced oranges. Steve and I snorkeled again this morning while Tom and Monica prepared Tanga for our move to a new location. The anchor was pulled up around 11am and off we went. On our way to the island of Waya which is just north of Navadra, we were motoring along when Tom yelled, "Dolphins 11 o'clock". OH MY WORD! We looked towards 11 o'clock and could see this large pod of dolphins heading our way. They grouped around the bow of the boat and swam with us. We looked off in the distance again and there were more dolphins coming. This has been my favorite moment of the trip so far. They swam along with us for quite a while and then slowly peeled off in another direction.

A few hours later, we arrived at Waya Island, in the Yasawa Island Group and dropped anchor in a huge bay on the north side of the island. Again, we were the only boat here at this island. Today would be the best day of the trip for me. We anchored off of Nalauwaki village and readied ourselves to go ashore. We girls had to dress modestly out of respect for the chief and villagers so we wore longer shorts and t-shirts. While still on board Tanga, Tom and Steve decided that Steve would be the captain of the boat and present the Kava for the Sevu Sevu ceremony. The Sevu Sevu is a ceremony of greeting performed by the village elder or chief. They decided that Steve would be the captain so the chief or elder would engage Steve instead of Tom since Tom had already been privileged to have the experience and the tendency is for the village chief to address the boat captain only.

All of that said, we arrived by dinghy to the island village. As we were nearing the shore, we saw the village children playing in the water. The kids helped us out by pointing the clearest path to the beach since this area is covered in coral. We anchored there and made our way to the shore. Upon reaching the shore, we were greeted by a man named John. Steve spoke with him to let him know we wanted to participate in a Sevu Sevu ceremony with the chief. He confirmed what we wanted and thanked us for honoring their tradition of the Sevu Sevu and proceeded to walk us through the village.

While we were walking, little children came out of the woodwork and quickly fought over Monica's and my hands. It was just the sweetest thing. John walked us over to their church (which was a Methodist church) and took us inside explaining to us that they worship daily at 4am to begin their day - before they begin any other task of the day, they worship the Lord. Then, they worship 3 times on Sunday. He held out a bible to Steve and asked what was his religion and Steve told him that we were Christians and used the same book but, I believe, had Steve not known the book he was showing him that John would have given him that bible. It was just a genuine moment that, for me, showed the true humbleness of the Fijian people. Out of their limited resources, he was prepared to bless someone else. This was the most touching moment of the whole trip for me and the one moment that deeply touched my heart. 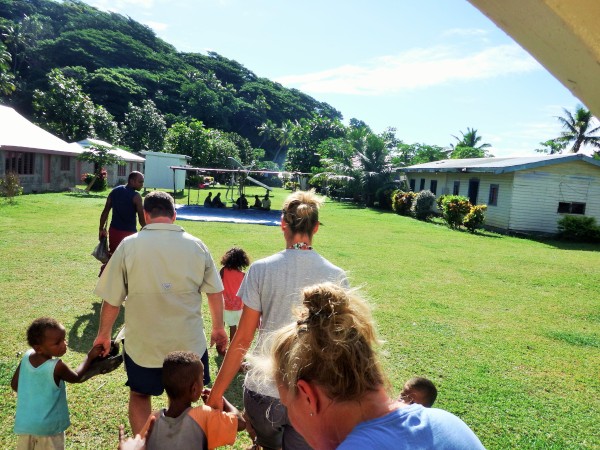 John then continued walking us through the village and took us to a covered area where there were about 6 men sitting. He told us all where to sit and they began to mix the kava powder with water in a large urn type container to prepare for the Sevu Sevu ceremony. John gave us instructions on how to receive the Sevu Sevu. We were to clap once, say Bula and take the bowl of kava from him and drink. After the drink was finished, we were to hand the bowl back to him and clap 3 times. The ceremony started with Steve and was then offered to the rest of us, then to the elders in the group. Tom told us initially that the ceremony would probably last a couple of minutes. Well, imagine our surprise when after we had all had our first cup, the kava was offered again...and again...and again. John also let us know that there was a group in the village visiting from Octopus Resort, which is a resort just over the hill from the village, that would be participating in a Sevu Sevu ceremony and then they, the villagers, would be putting on a show. John asked Steve if we would like to stay for the show and of course, Steve said yes. Well, they sat us on the edge of the mat and brought the other group in. We thought we would just be waiting while they had their Sevu Sevu ceremony but, nooooooooooo...we got to participate with the group from Octopus too! During the ceremony with the group from Octopus, it was explained that every village has a chief and a spokesman. We concluded that John must be the spokesman for the village since he was the person we dealt with the most. After a few more cups of kava, it was time for the show to begin! The women sang beautiful songs in Fijian and danced while the men sang manly songs and did a manly warrior type dance. After a few songs and dances, we were all asked to choose a partner from the villagers for a dance. It was a kind of conga line but, required a little more coordination than holding the waist of the person in front of you and kicking a leg out here and there but, it was so much fun. A whole lot of laughter by both the villagers and we participants. After the entertainment was over, the village ladies were given time to display their handmade items for sale and we were allowed to make purchases. 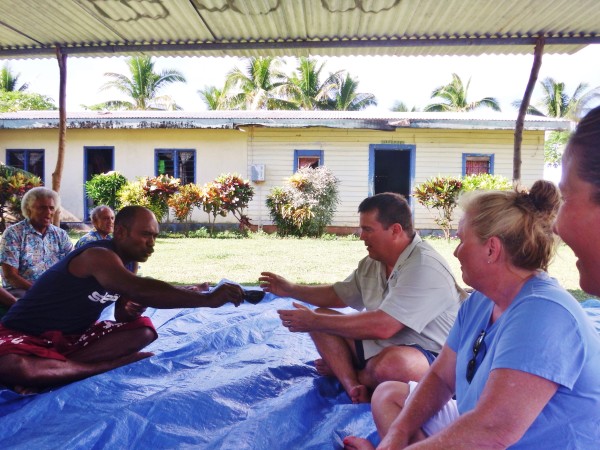 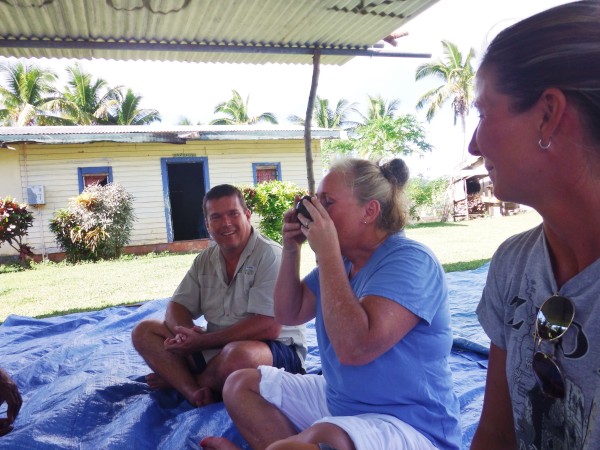 When the shopping was done, we headed back to the dinghy to make our way back to Tanga. Upon arriving at the beach, we found the village children making use of the dinghy...not as a boat but, as a modified bouncy house! Hiding his displeasure of having little hands all over things they shouldn't be on as well as sand all over and in the dinghy, Tom gingerly removed the children from the boat and began to move the dinghy away from the shore.

Meanwhile, Monica and I were traversing the coral, trying to make our way to the dinghy. Little ones had attached themselves to our hands and to us, it seemed they were trying to help us out to the dinghy. As a side note, we had all had a conversation earlier about there being some villages, not necessarily in Fiji, who were very afraid of strangers because of them coming in and stealing their children. Well, Monica and I were slowly walking out to the dinghy with little ones on each hand never thinking it was an issue. After all, it's not like we walked into the village and picked out our favorite and proceeded to try to leave with them but, either way, a gentleman jumped in his kayak and proceeded to briskly paddle out to where we were headed all the while saying "leave the children here". We could hear him saying something but, couldn't really tell what it was. Needless to say, Tom and the gentleman were happy when we were all in the dink headed to Tanga, sans children.

Once we were back on Tanga, Steve and I grabbed a beer and a life jacket and hung out in the water, Monica did some paddle boarding and Tom took the dink and tried to find a fish anywhere in the waters of Fiji (he did not). We had delicious spaghetti for dinner and hit the hay early after a very adventurous not to mention my absolute FAVORITE day! 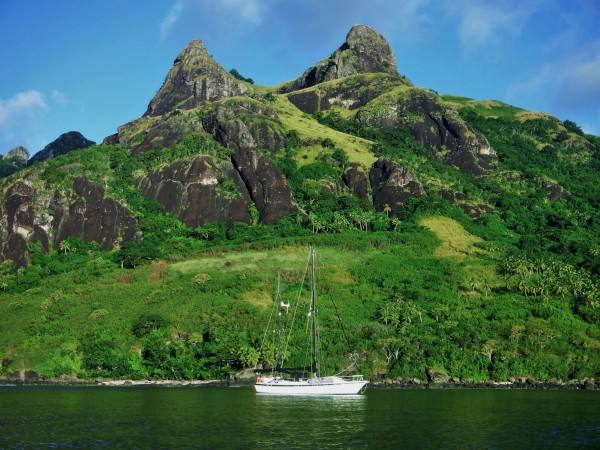