A day at the races

06 July 2014 | Nananu-i-ra Island, Viti Levu, Fiji
A couple weeks back, the CEO of Vuda Marina told us of the upcoming, first annual, Fiji horseraces. Since this would occur around the time we would be near the mainland for provisions and prep for our trip north, we decided to make this an event for us to see. As word spread throughout the anchorage and various marinas, many cruisers decided to go.

Ourselves and TTP decided to take a cab, while another group grabbed a van, and yet another group hiked, bused, and hitchhiked their way there. We arrived and paid for the "VIP" seating. The VIP seats were under a tent at the top of the hill overlooking the front stretch, much like grandstand seating at a track in the states. The seats we selected were next to the Prime Ministers seats which doesn't bode well for the behavior we and our friends exhibit, thus a move was required. As we pondered our options and discussed the least likely places to offend, the announcement of the beer tent opening took place. BING!! The tent was at the base of the hill we were on so we moved right down and settled into an area were our behavior is acceptable. About five minutes after the 4 of us settled in, 6 more cruisers we know and have had beverages with, walked up and the nonsense and laughter began.

Nonsense aside, the races were an interesting take on horse races. A program was passed out suggesting nine races of ten horses each. Uhm, not so much. What the program suggested was the maximum number of entrants. The first race was 4, the second was 2, and the third had ONE. The fourth race did have 8, and we departed after that race, but were told later that two of the remaining races were canceled due to lack of horses.

The intermissions were filled with tribal dances. Some local children came to the tent to see what all the laughter was (Fijians of all ages gravitate to laughter) and were treated to Pete teaching them some magic tricks and Monica showing them some dance steps. 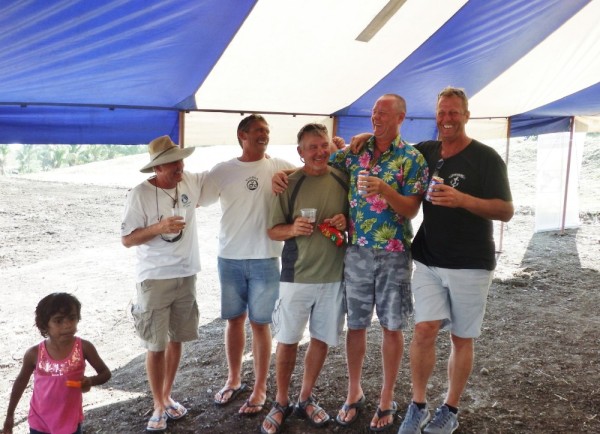 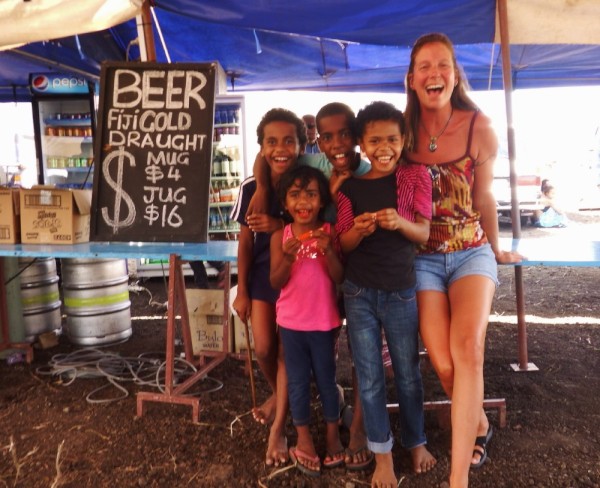 Before we wore out our welcome, the ten of us decided to head off to the Rugby match where loud obnoxiousness is encouraged. While the rest of the group headed to the match, us and J/L went to get some food. After the eats, we walked across the street to the stadium for the second half of the match.

The match was a challange match between the best of Fiji and the best of the Cook Islands. Fiji has a world class team and consistantly wins matches against some of the worlds best, while the Cook island team is still in its formative stages. By the time we walked in and joined our other friends, the score was already 73-6. A strange observation was that not a seat was vacated. During blow outs in the states, half the crowd would leave, but here in Fiji, the crowd remained and cheered each point as if it were the winning touch. We even found ourselves caught up in the excitement and high fiving during a couple points.

After the match, it was decided we should all head to the pub that sponsered the beer tent at the races and thank them with our continued patronage. Thus, the ten of us descended on the "Farmers Bar".

The Farmers Bar is a nice spot in downtown Nadi that has a wonderful menu and nice clean atmosphere. We were treated to lots of food and fire dancing and all of us enjoyed a few rounds of pool before it was time to find home. What a day!!